In two short weeks I need to have a design fleshed out for a large gingerbread project as part of the Habitat For Humanity gingerbread showcase. In order to complete my design I first need to see what’s possible. There are so many cool candy and baking techniques out there that I have never tried, so it’s time to practice.

Gingerbread houses are best made from a structural gingerbread. Something that will end up more rigid. This usually means its not as sweet or as soft as you might like. SO, my first step was finding a recipe that would work. I chose this one Here, I figure you can’t go wrong choosing something as tried and true as this; Christine McConnell’s gingerbread creations are amazing.

I only made a 1/3rd of this recipe because it was just a test. The taste is alright but it’s definitely not something we would make for any reason other than this.

The gingerbread rolled out nicely and was very easy to work with. It got a little difficult when it was too warm, so I just popped it back in the fridge and worked on something else for a few minutes.

I rolled my base out to just under a cm and my walls about a half cm. I was trying to avoid making the house super heavy. I used a ruler to try and keep my pieces uniform but I forgot to make the base bigger because of the width of all the pieces. Instead I cut everything at 4inx4in. I baked it with my cut-out pieces still in place because I saw this tip on another blog post that suggested it would keep a better shape that way. It worked fine but seeing this gingerbread bake makes me think it was an unnecessary step and instead I could have reused that dough. 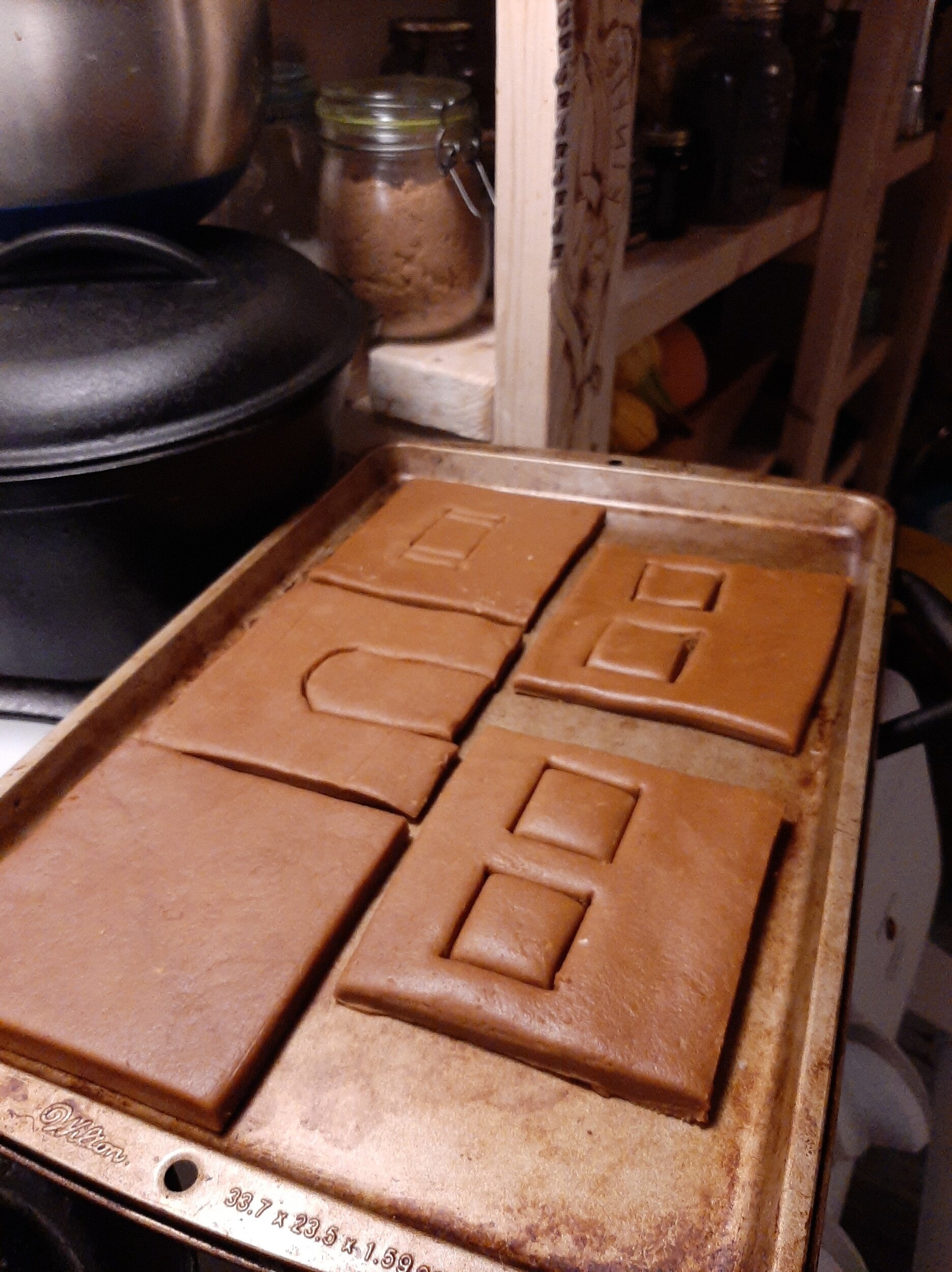 Once my gingerbread was baked I realized my error in sizing and decided to notch the pieces so they would still fit together. This turned out to be a good lesson.

Always have a design worked out so you know how big each piece should be.

Notching the gingerbread worked pretty well, I just had to be gentle and go slow. I started to construct my house then realized I had forgotten to do the windows first. 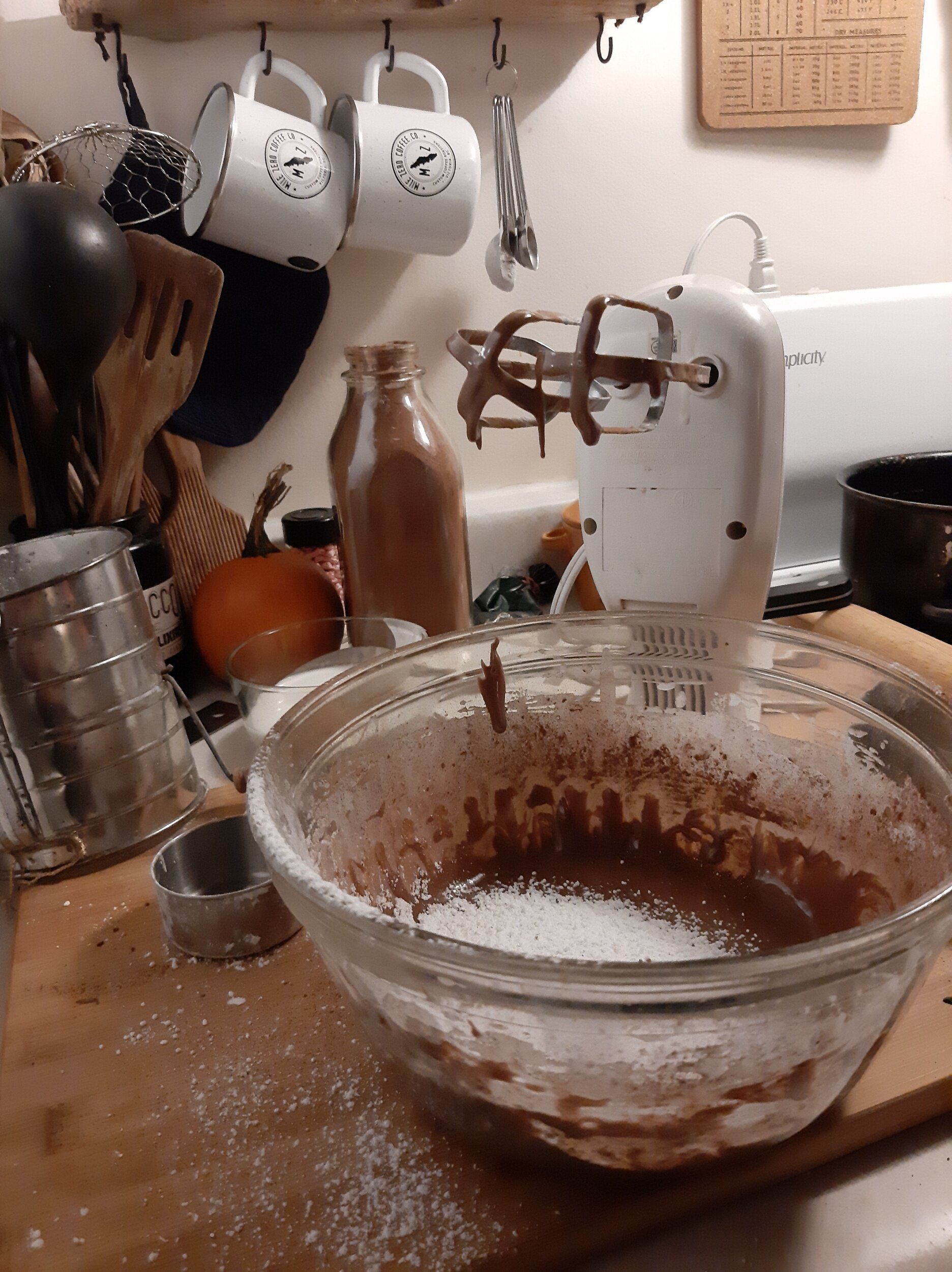 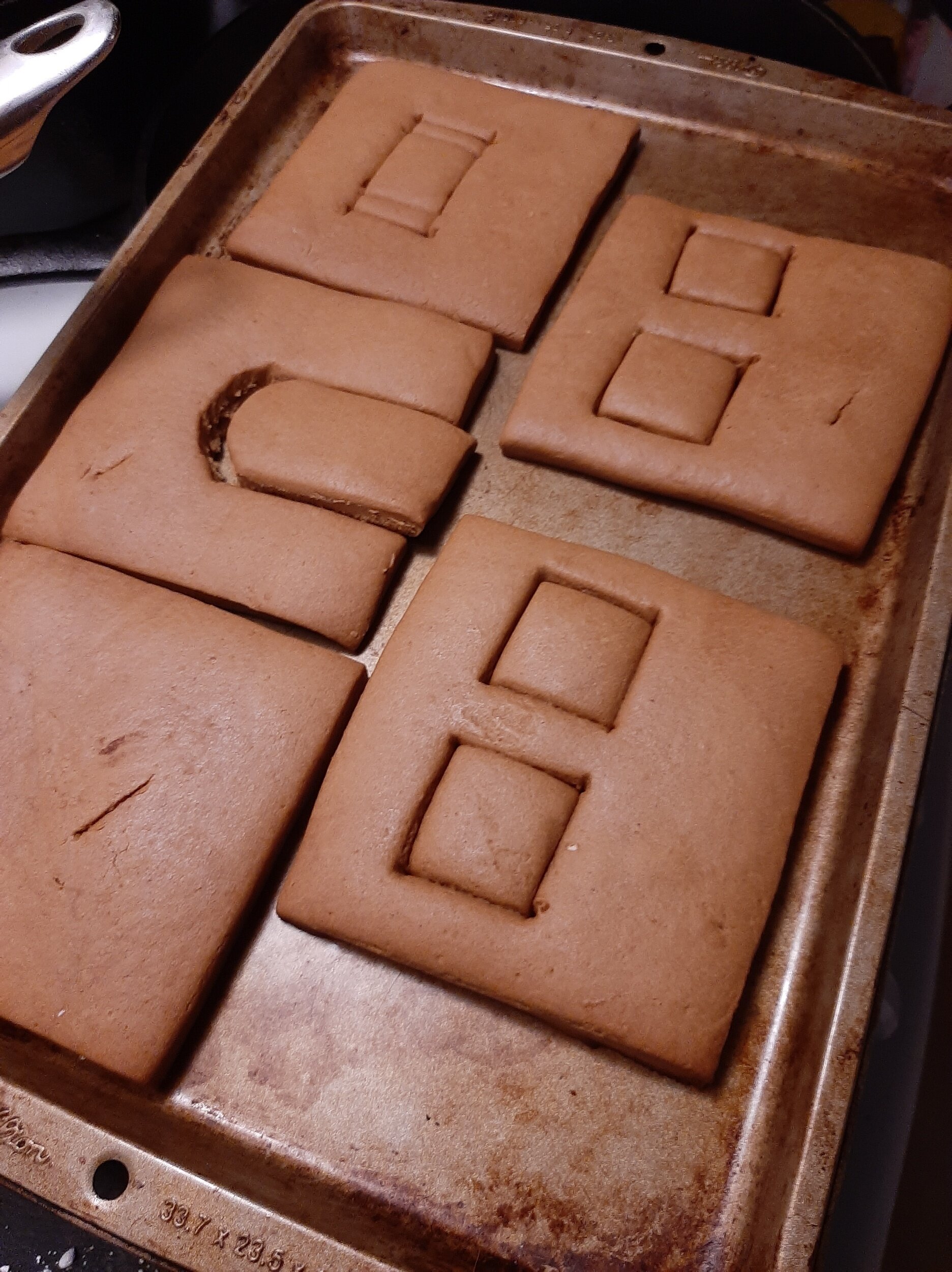 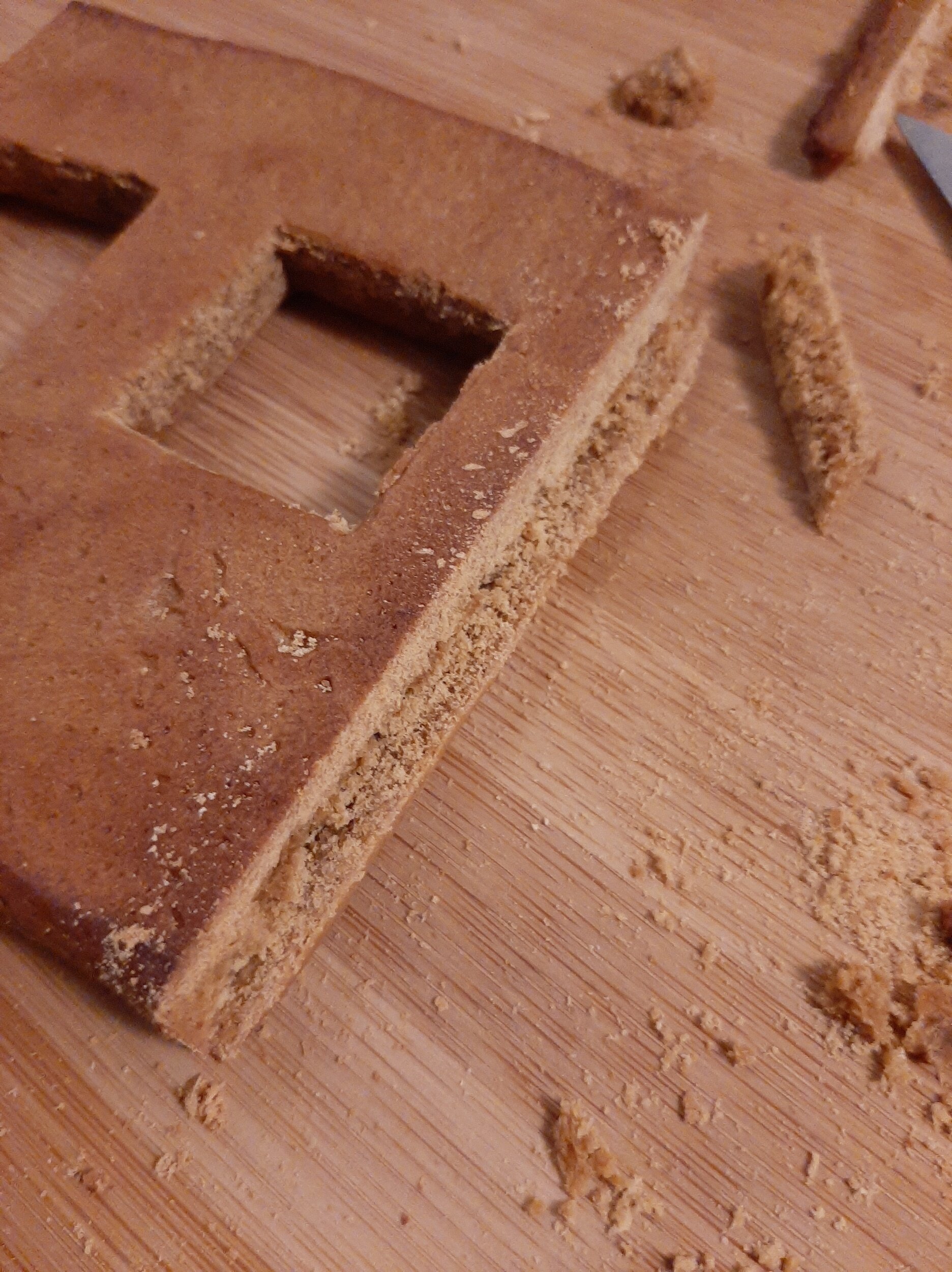 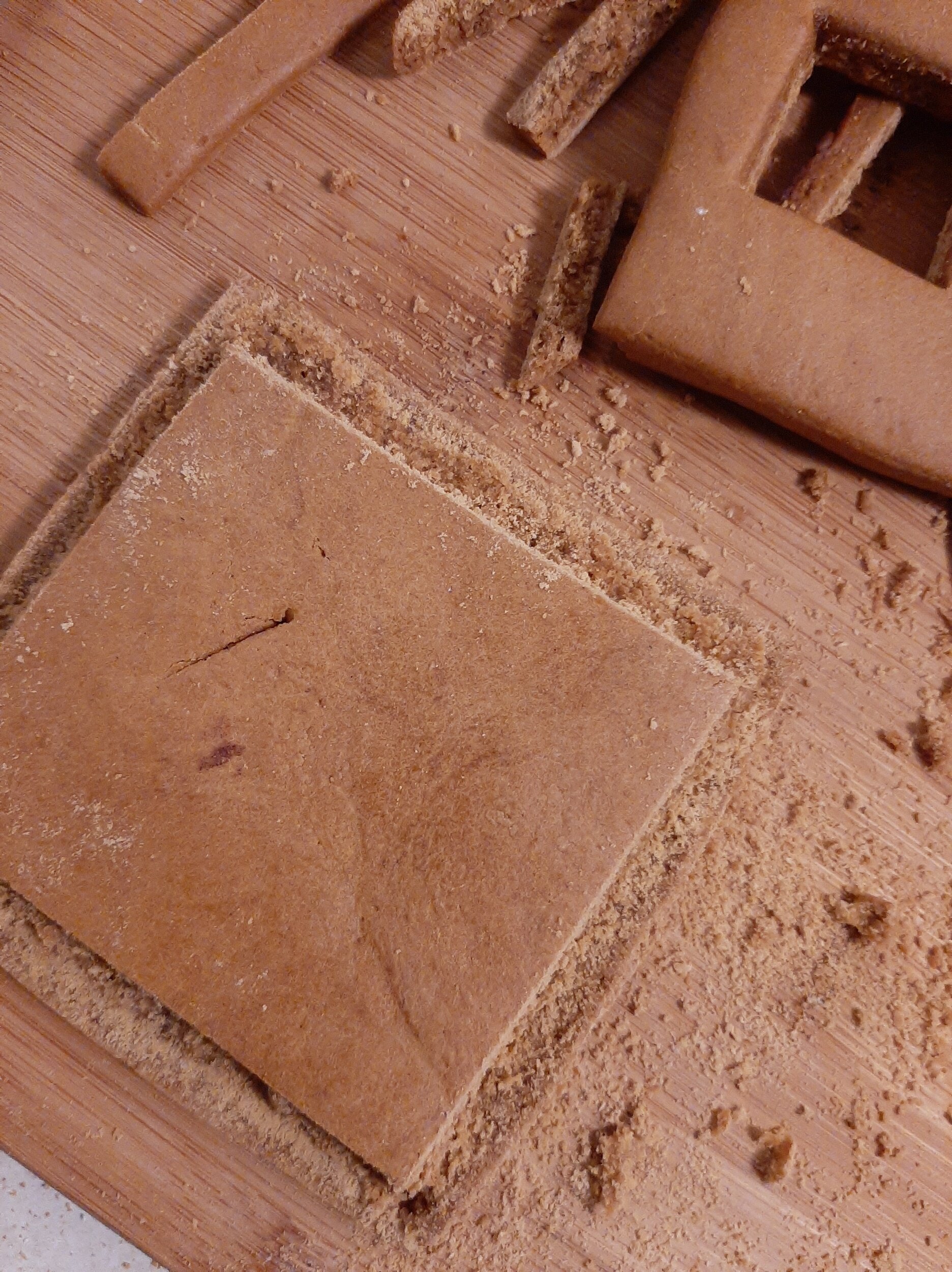 I waited until my house was fully assembled before building my roof. I wanted to make sure it fit ad see if I could bake it as one piece.

Sugar glass is a really fun way to scale up a gingerbread house, if it’s done right you can make really nice clear or coloured glass windows. The trouble with using sugar however, is it only holds for a few hours, after that its unpredictable and can slump or melt and get foggy. Sugar also starts to turn brown at high temperatures. Instead a lot of people use isomalt. Isomalt is a sugar substitute that, when heated, turns into a clear liquid and dries to look like glass. It has a much higher heat threshold and will keep its form for a long time.

All you need to do is heat it in a pan until it melts, then let it set. The bubbles will settle and it should be clear. You can just pour it in to look like glass or, with some gloves and a silicon mat, it can be used to make pulled sugar structures, but that’s for a future project. 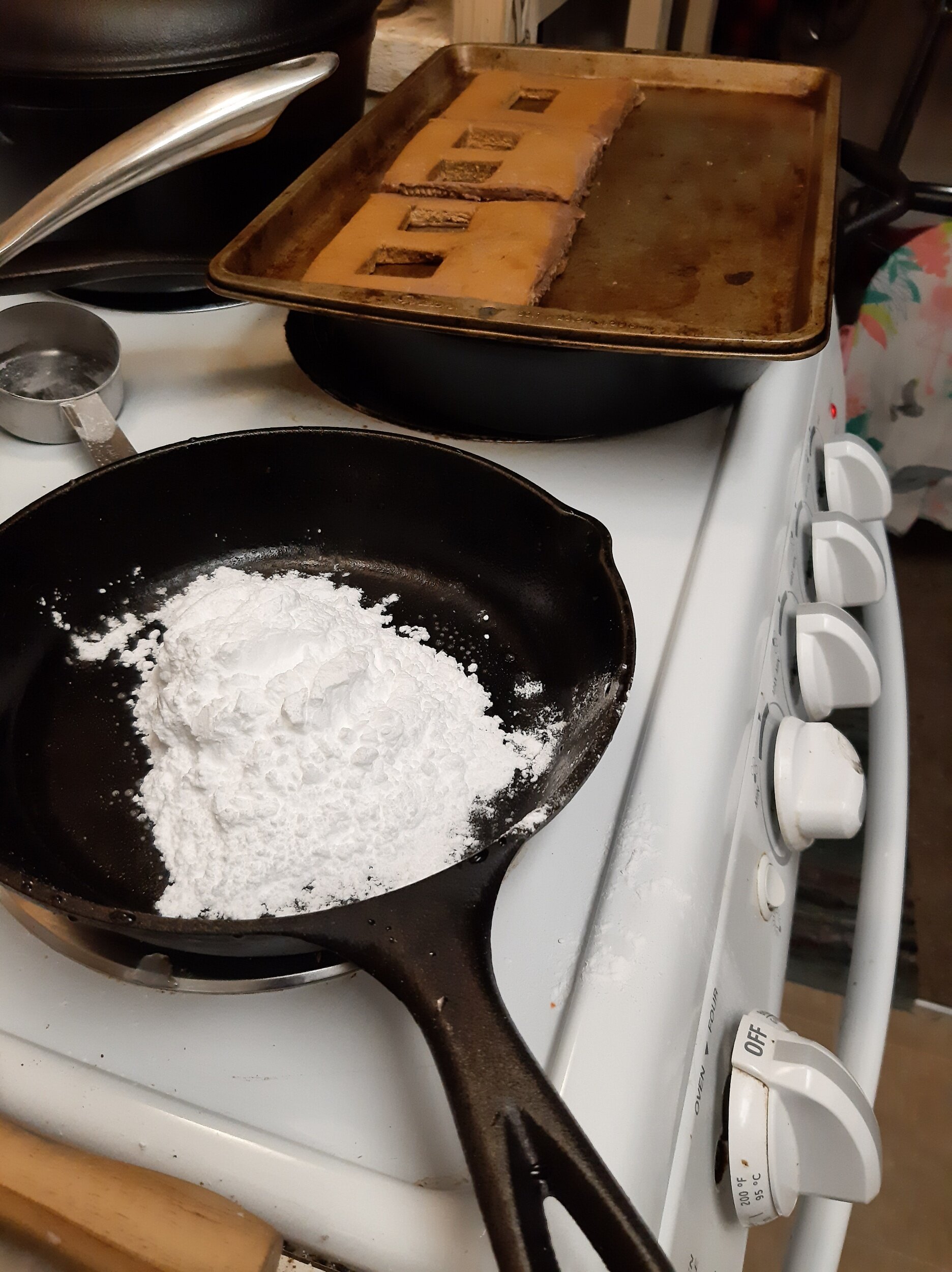 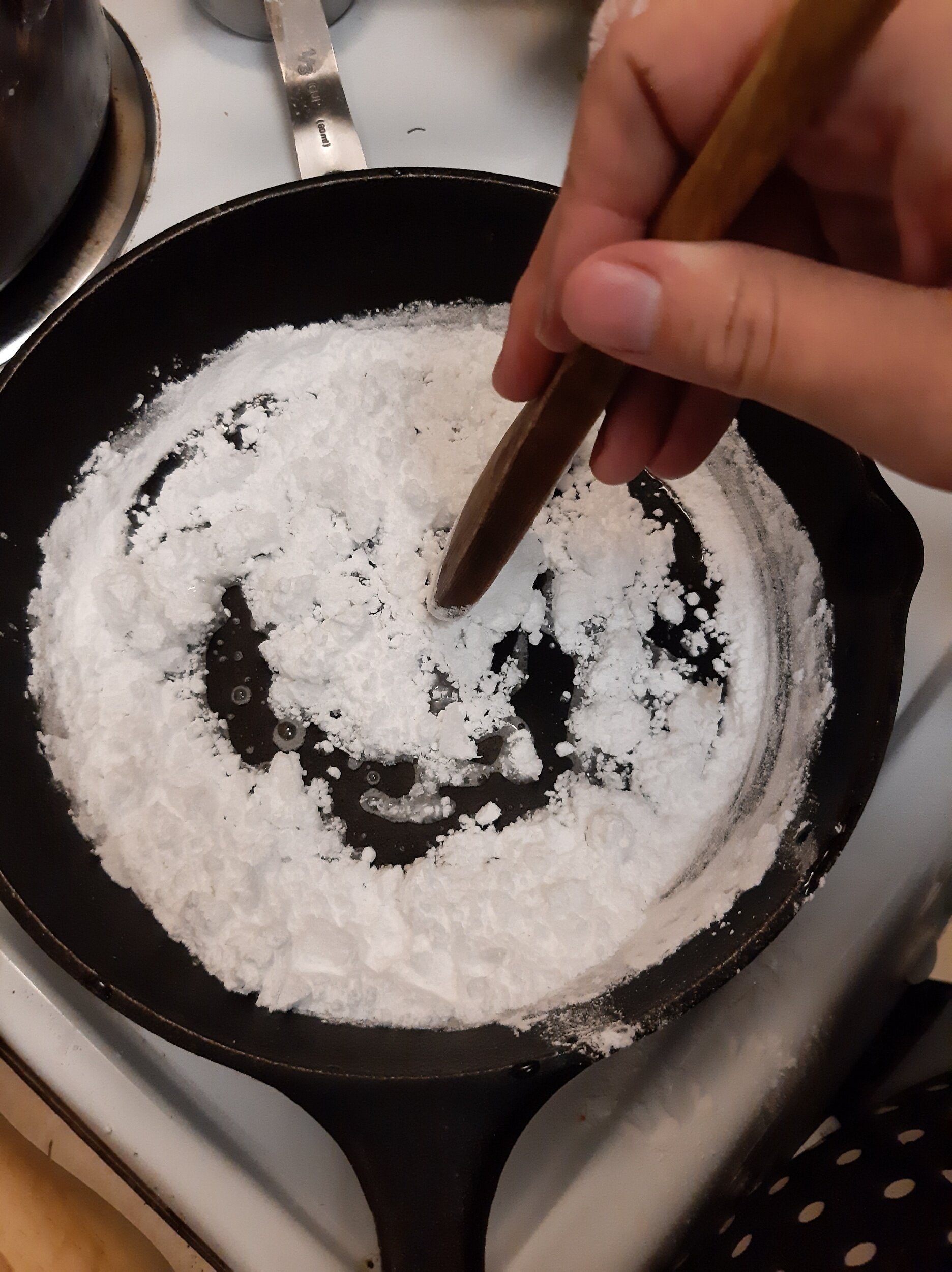 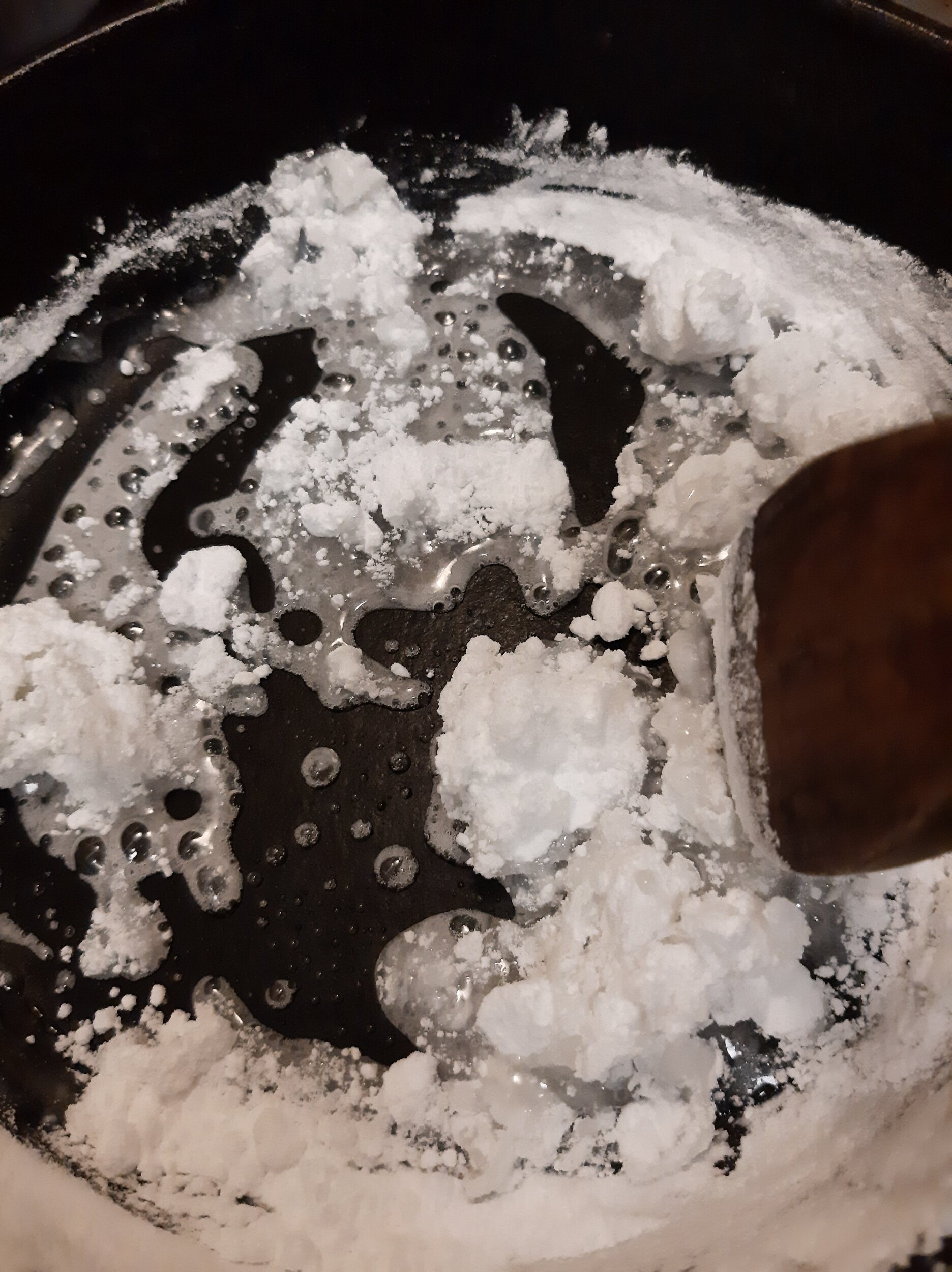 I didn’t quite wait long enough for my isomalt to become completely clear so it ended up a bit foggy, which works for a spooky house. Sadly I got a little wound up in what I was doing and forgot to take pictures. Oops!

I had my pieces all right side up on the cookie sheet and poured it in carefully. I made a huge mess! But it was fun. I got the isomalt pretty much everywhere and burnt myself a few times throughout the whole construction. This is definitely not the part to do with young kids around. Once they were dry I gently pulled them off the tray and started construction.

Turns out I hadn’t let one of my walls set long enough and after it was constructed the windows started to sag, which looks pretty weird so I adapted and made it part of the design.

I kept some Isomalt warm on the stove for experimenting with. I ended up using it many times.

To build the house again, after I had the windows in, I used royal icing coloured with cocoa powder. I made the icing while my gingerbread was baking so my colour isn’t great, in the future I will have a piece on hand to try and match up the colour better. For each piece I put icing all the way around it then pressed it in place. Once it started to set I smoothed out the icing on the outside with my finger. Once it was completely assembled I painted the whole house with a thin grey royal icing.

I waited until this point to do my roof to make sure it would be a good fit. I rolled out my remaining dough and cut a large rectangle big enough for both sides of the roof and two small triangles to finish off the walls. I did it this way instead of in two pieces because I wanted to practice baking a piece of gingerbread in a shape instead of flat. I took a piece of cardboard and bent it in the middle then used a cardboard roll in the middle to hold it up.

It worked well except I didn’t put anything between the cardboard and the gingerbread and it stuck to the cardboard base. I had to inch it off very slowly and got a few cracks in it that I glued together with isomalt; a very messy process.

I lost a good amount of the bulk of the roof cookie but it ended up working anyway thankfully.

I shaved down my triangle pieces and fit them onto my walls, I glued these in place with isomalt which worked very well. Then I attached the roof with royal icing and finished my decorating.

I took a bunch of pictures of it at this point because it was looking pretty done and there was a good chance I would screw up the next part. BUT it kind of turned out so onto the next part.

My original idea for this house wasn’t just any old spooky house, I wanted Baba Yaga’s Chicken footed hut. This was a good opportunity to test out some load bearing structures using some modeling chocolate. 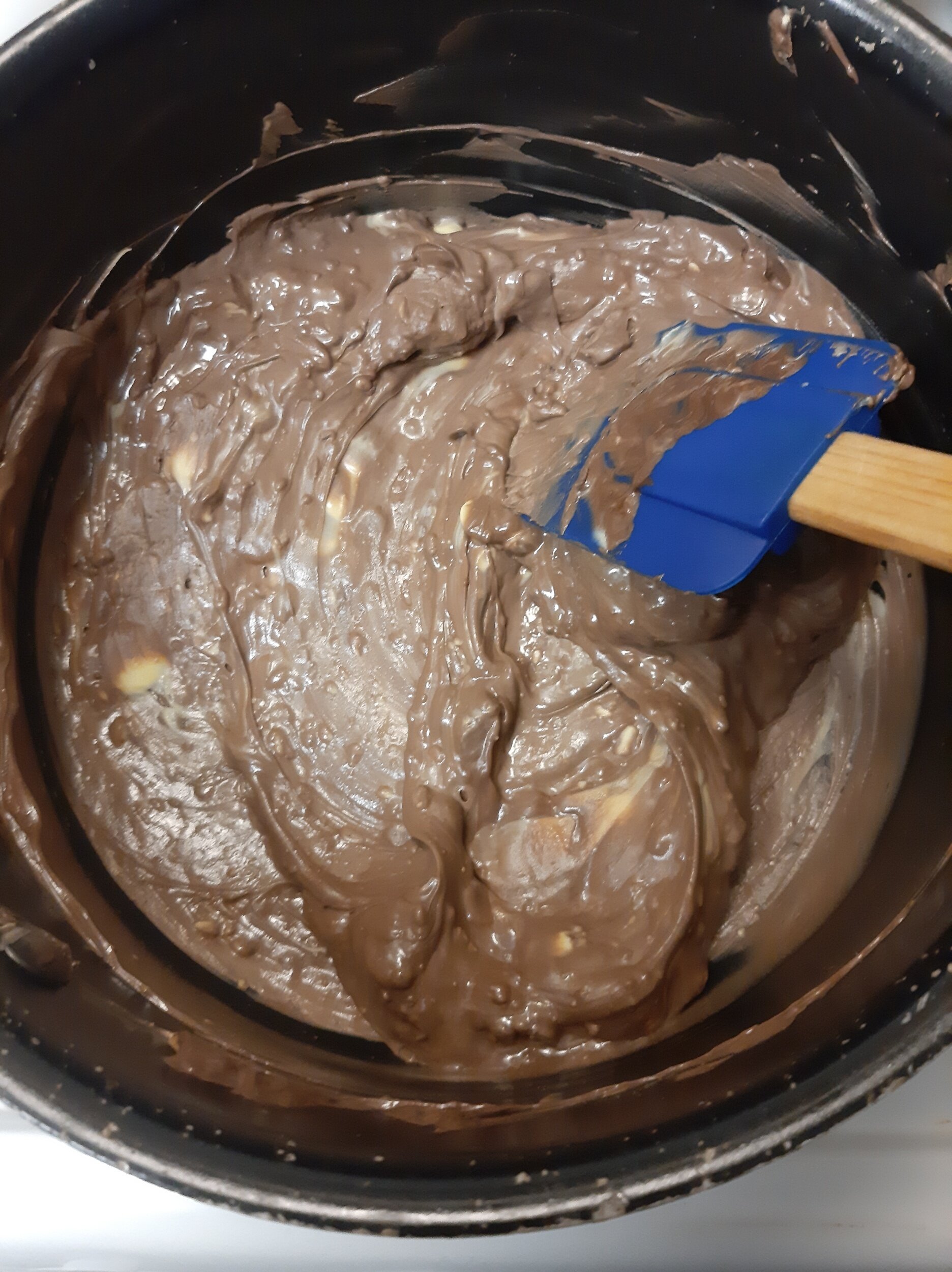 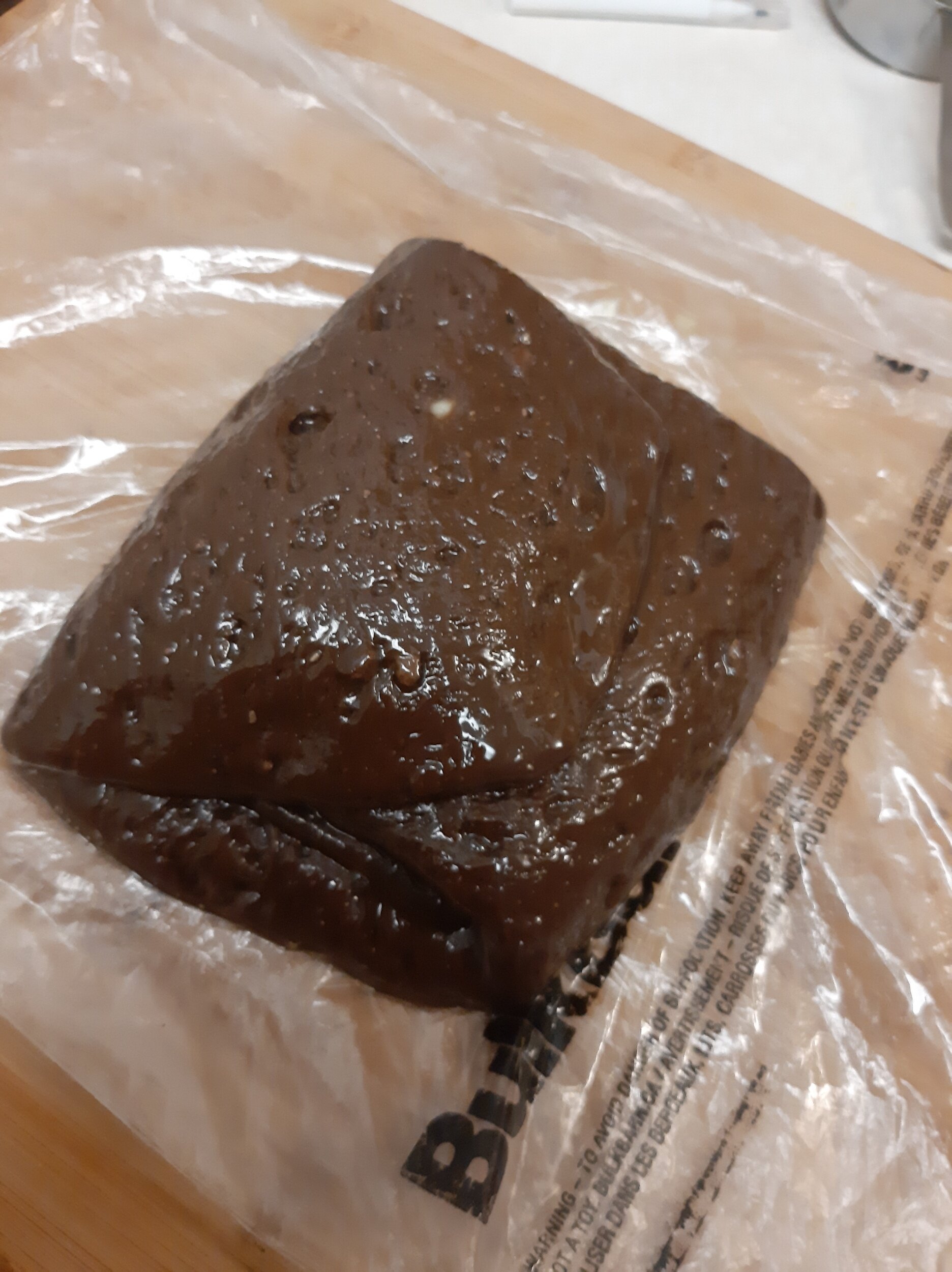 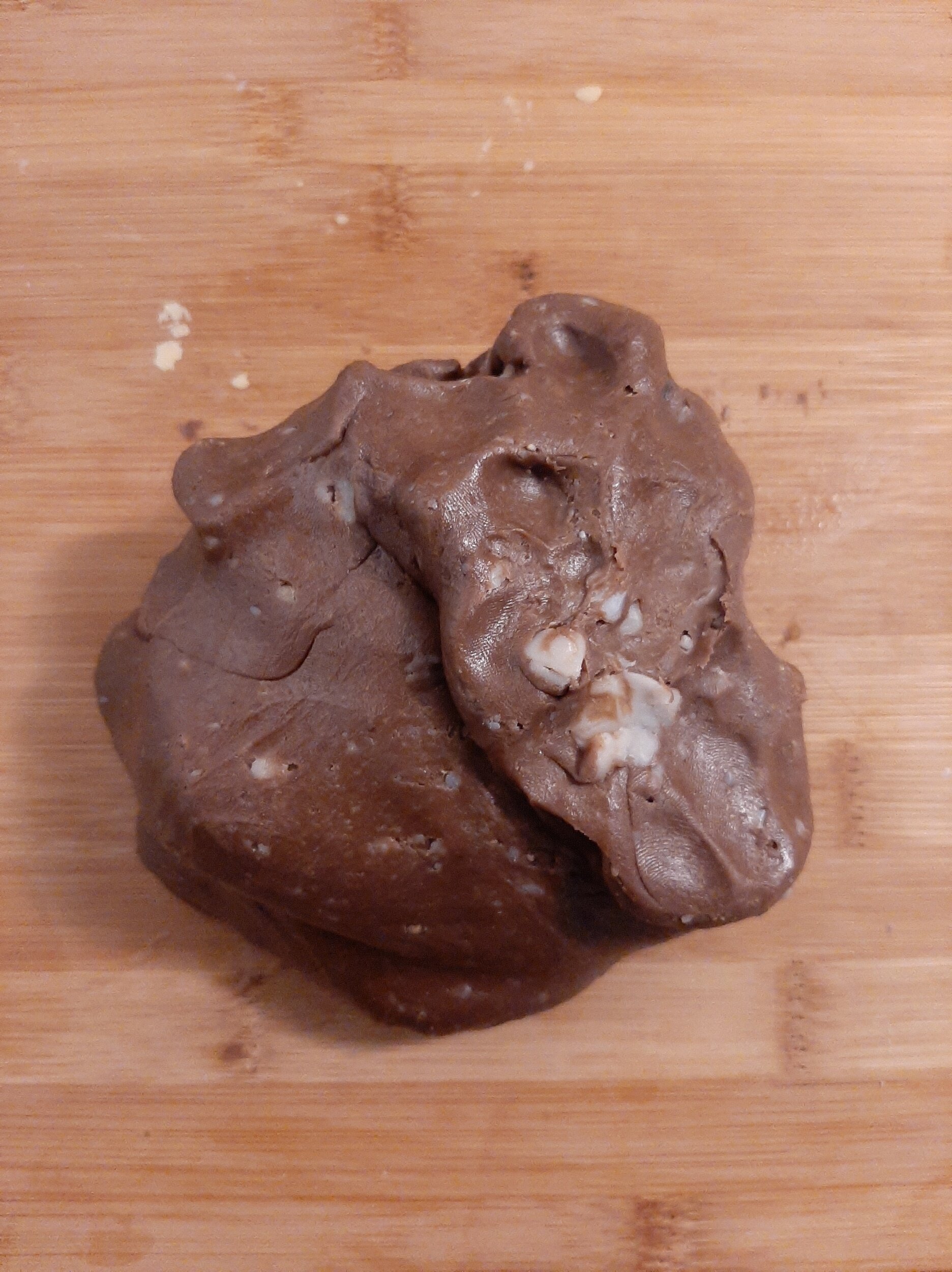 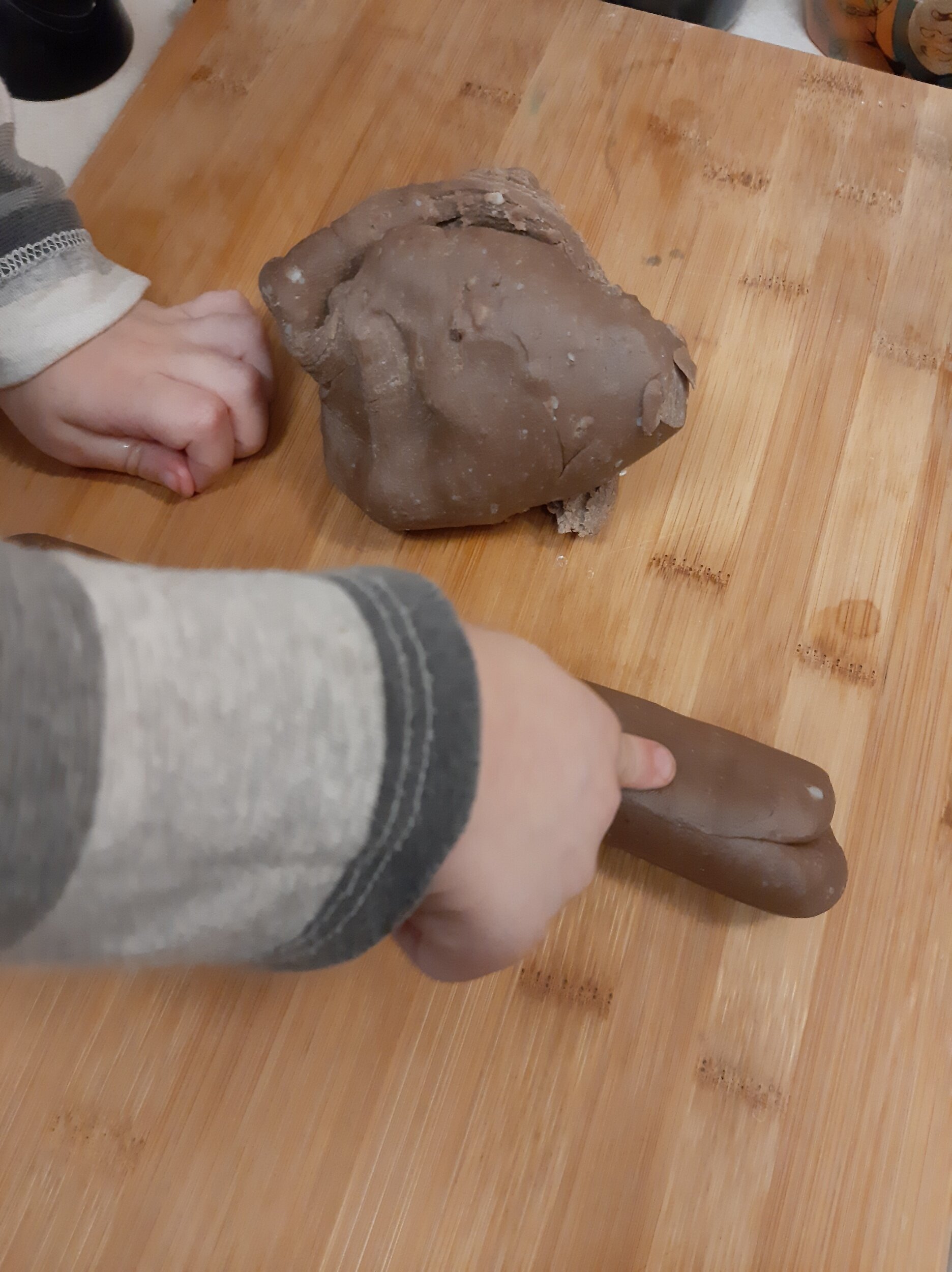 I mixed up my modeling chocolate earlier in the day to give it several hours to set. This is another thing I’ve never done before and will be better prepared next time. I used a mixture of dark and white chocolate wafers hoping for a lighter colour than I ended up with but it still works. I used a 4:1 ratio of chocolate to corn syrup. I could probably write a whole post about modeling chocolate but for this one I will keep in short. All in all I successfully made modeling chocolate, although it wasn’t very smooth and I had quite a bit of oil come out in the setting process. It was a huge learning experience.

For the leg construction I used wooden skewers, wrapped in tin foil in the middle of rice crispies tightly packed then wrapped in modeling chocolate. The entire time I was doing this I was sure it was going to fail. While it didn’t turn out exactly the way I had in mind, the fact that this thing is still standing means I did something right. 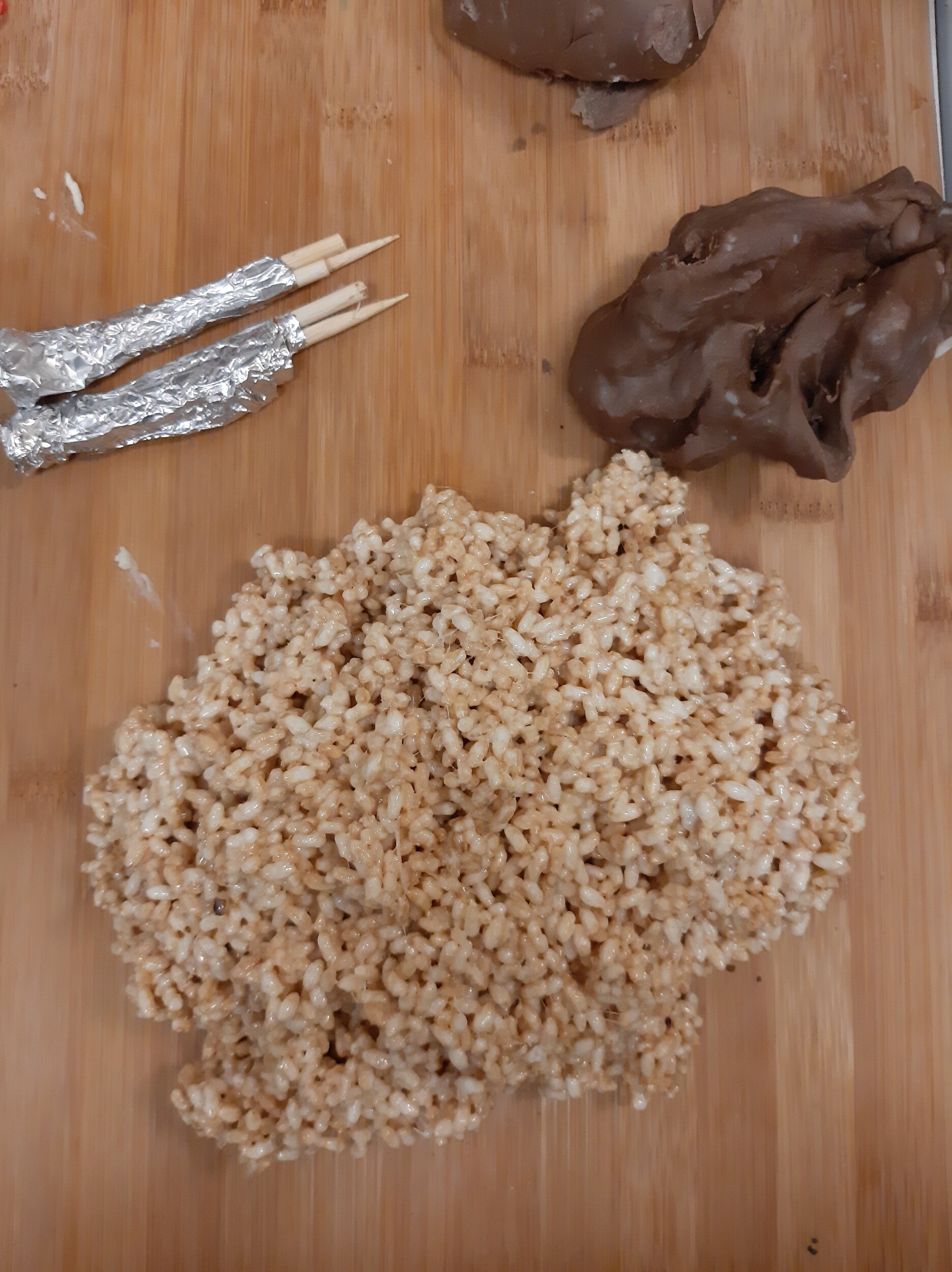 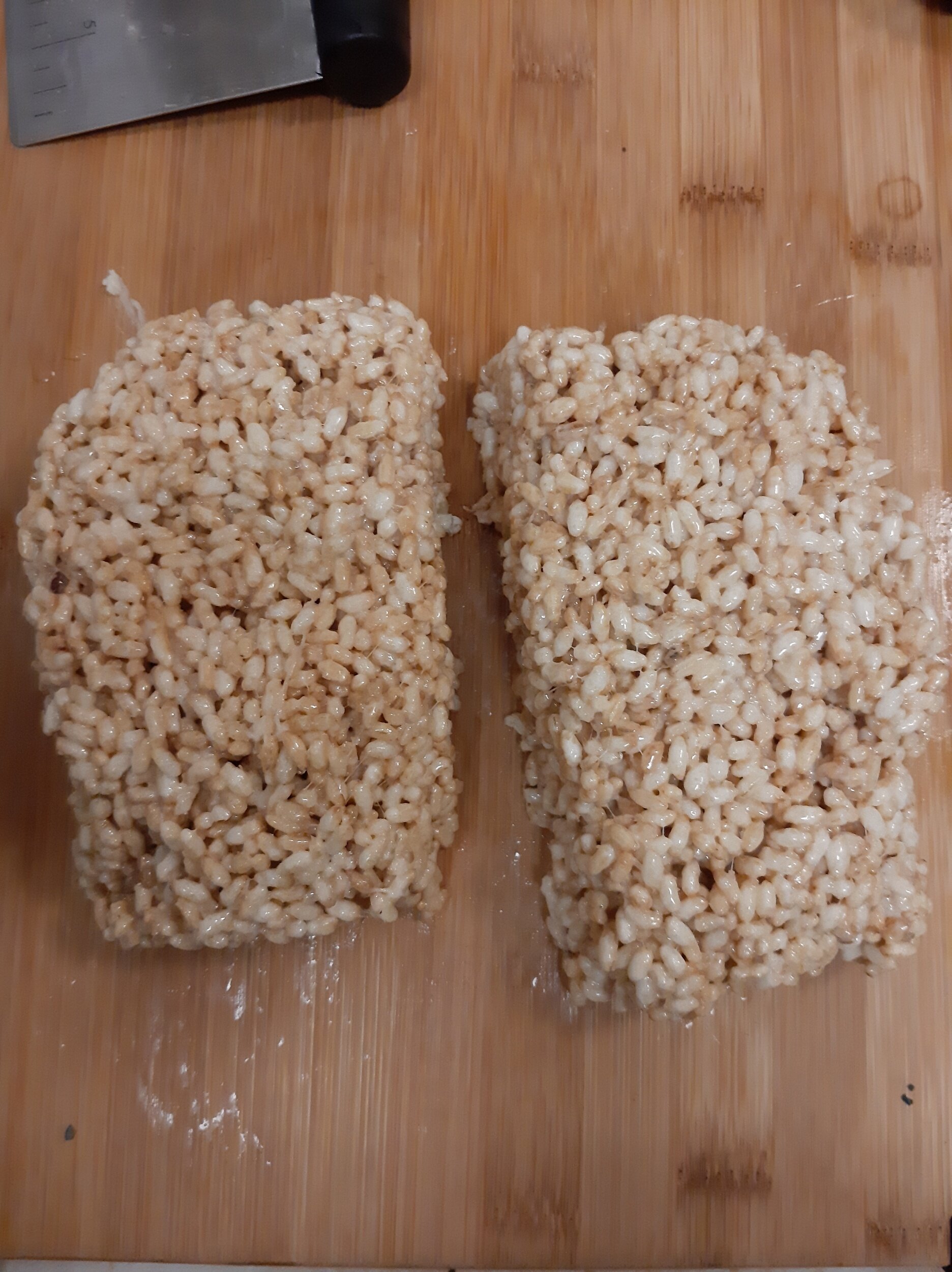 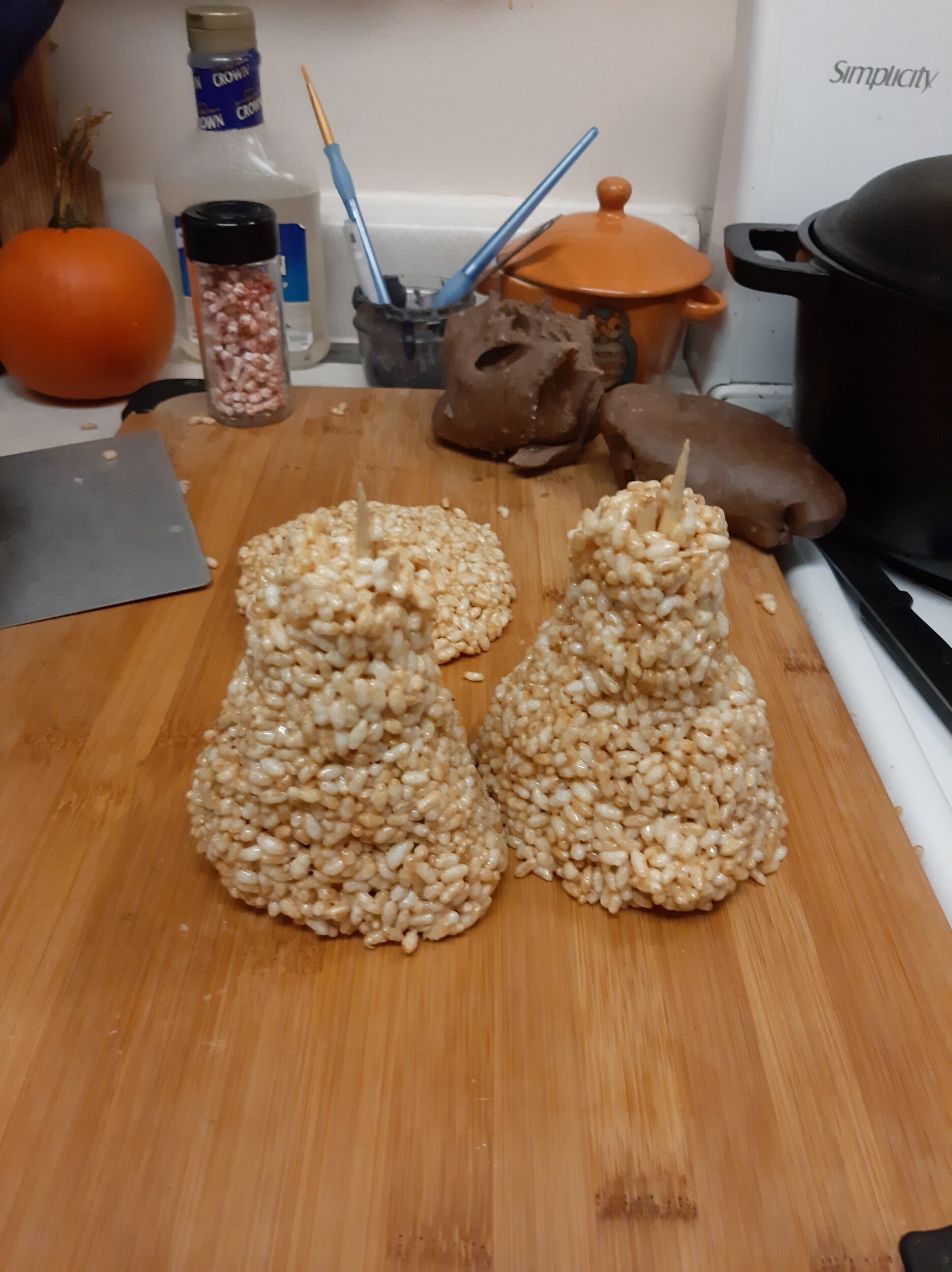 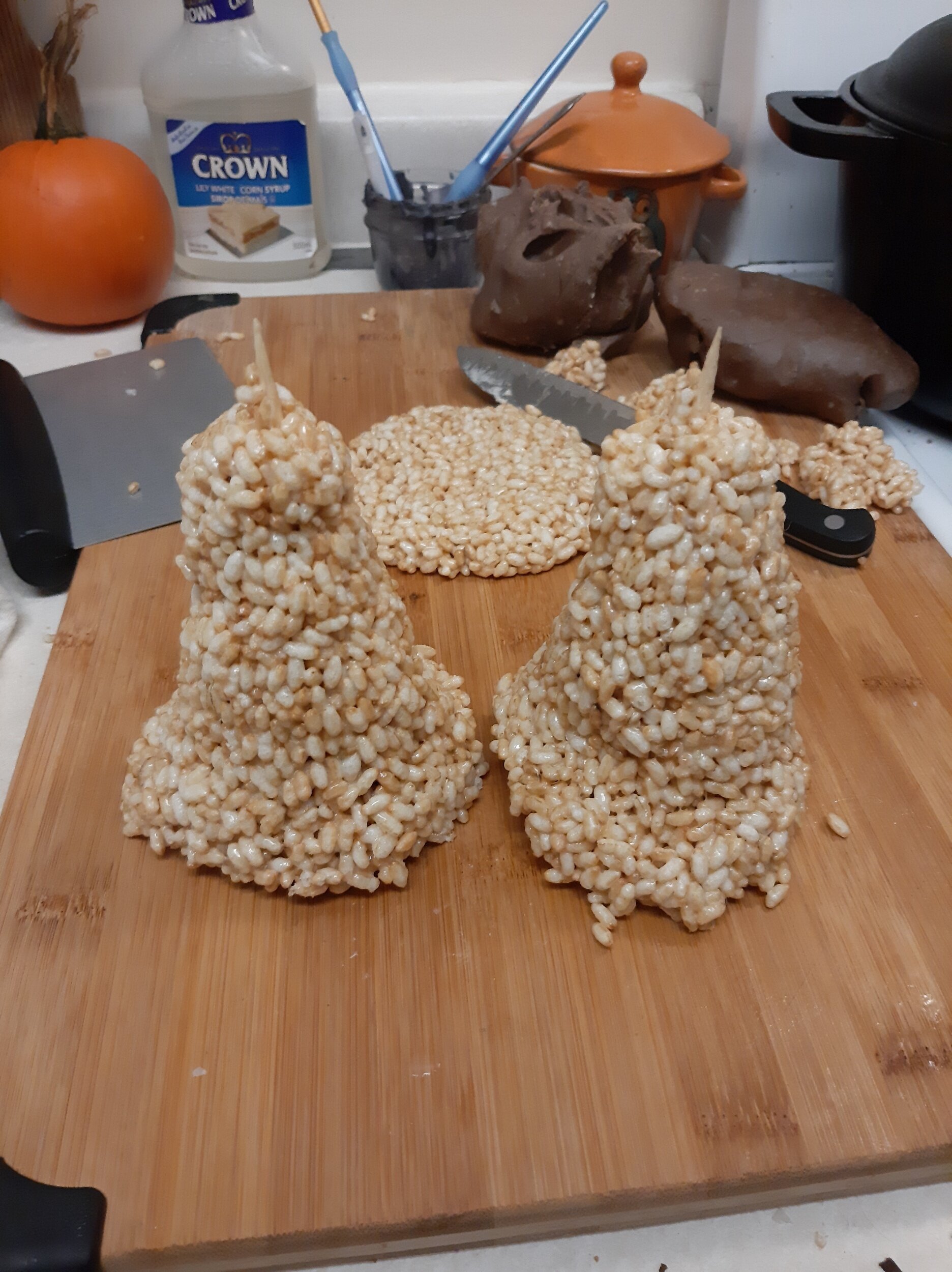 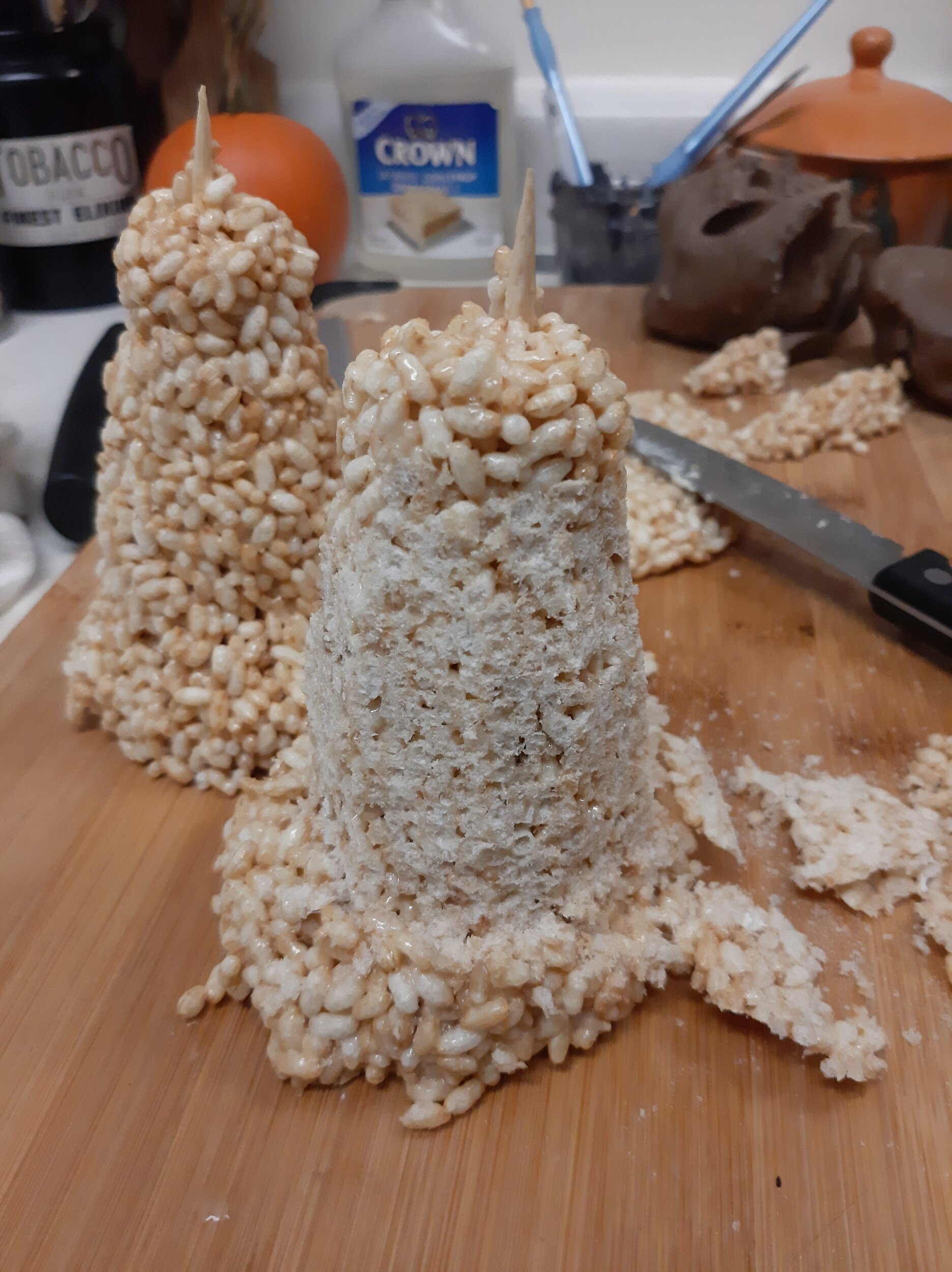 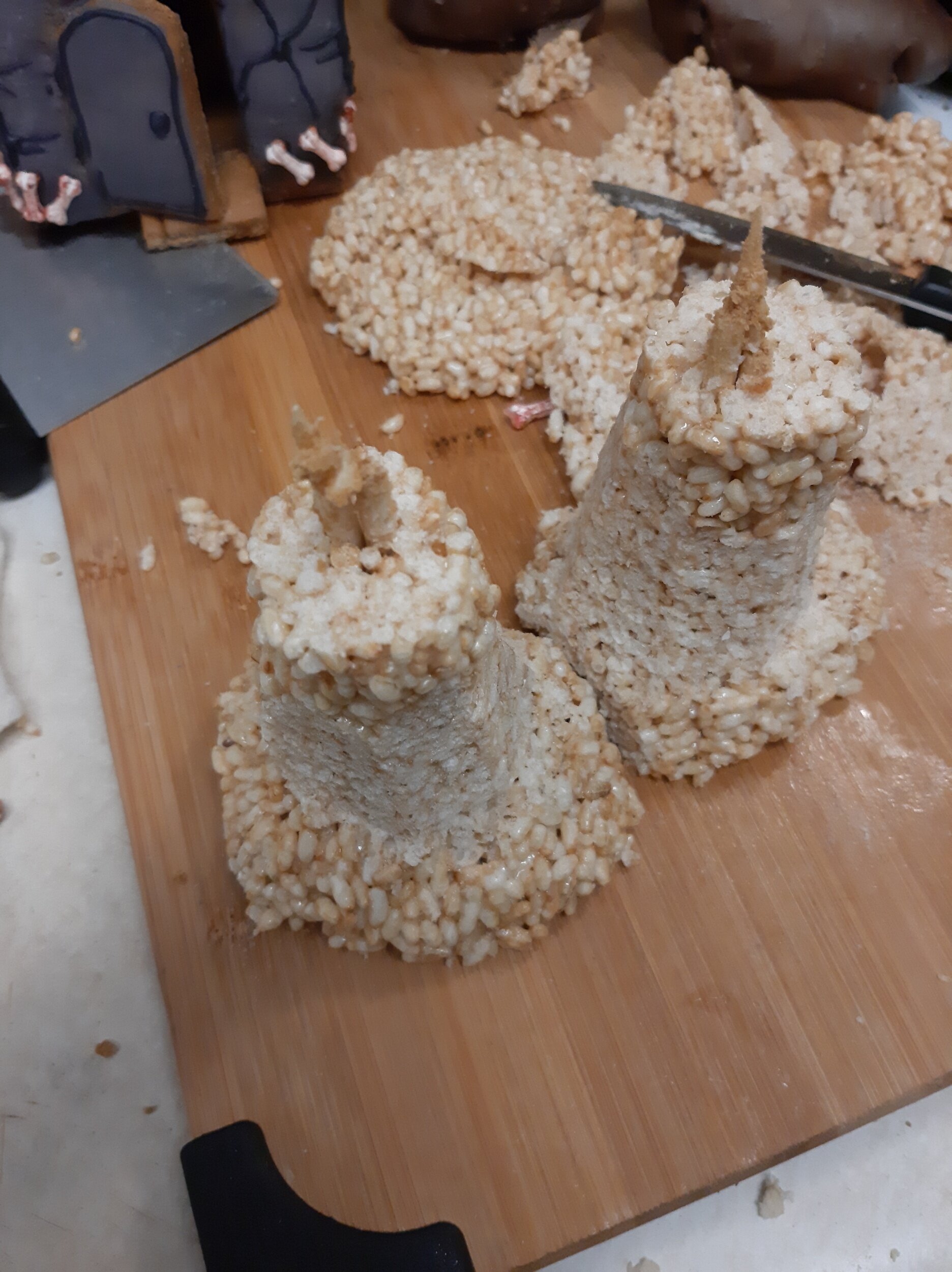 For the rice crispy part of this I ended up forming it then letting it set, then squeezing it down more, letting it set again and squeezing again. My goal here was to really pack those suckers together. Once it was as firm as I was going to get it, I stuck them in the freezer to fully set. I left them about an hour before pulling them out.

Once they were out of the freezer I shaved them down as much as I could with a knife. I was worried if I made them too thin they wouldn’t hold up my house. Once they were all shaved down I wrapped them in modeling chocolate and stabbed the tops of the skewers into my house… crooked. Oops. I glued my house on with royal icing and covered the seam with modeling chocolate.

With everything holding up I started shaping my chicken feet! The biggest thing I learned here is to plan for more time, if I had taken this process slower and let the modeling chocolate cool after warming from my hands it would have been much easier. As it was, this part was done with two grouchy kids trying to get my attention. The last step was to put in some chocolate wafer claws and pipe in the details… This part is where the kids had succeeded in getting my attention, the piping was done with a toddler standing in front of me and a baby in my arms, again I am so impressed this thing is even standing. As an added benefit it actually looks like what I wanted it to.

In the words of my toddler “Oh! Mom, spooky house walk feet!” 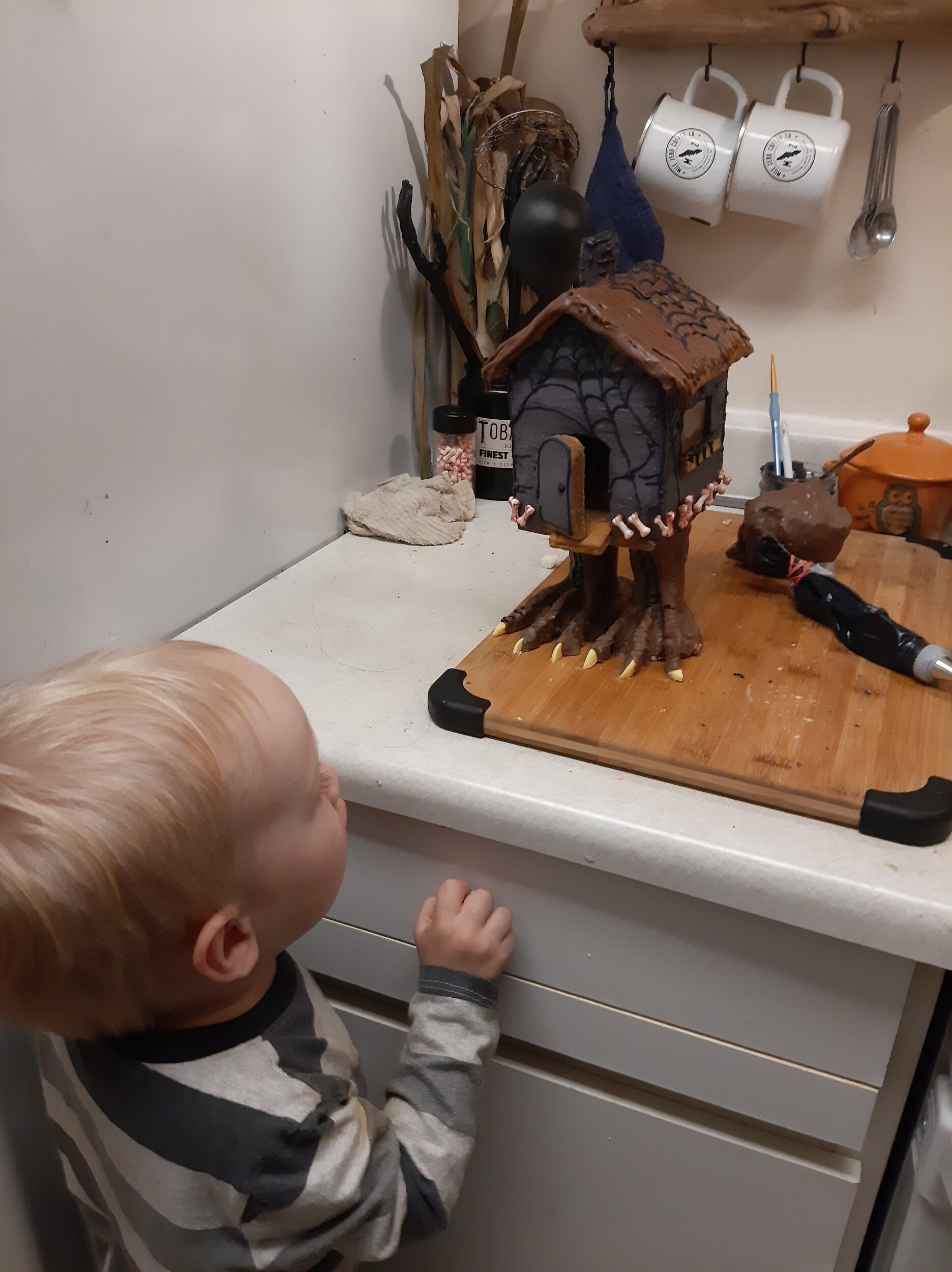 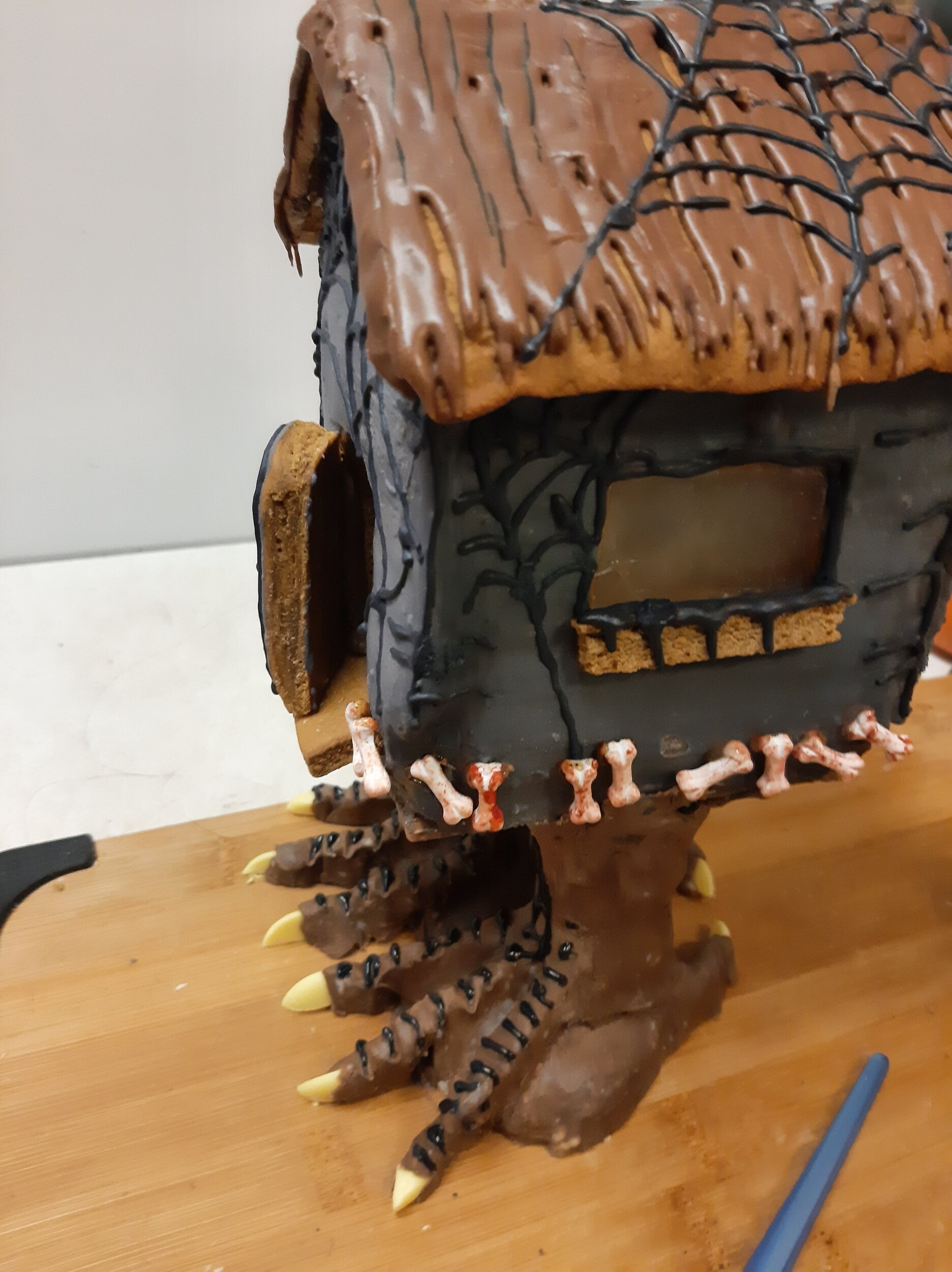 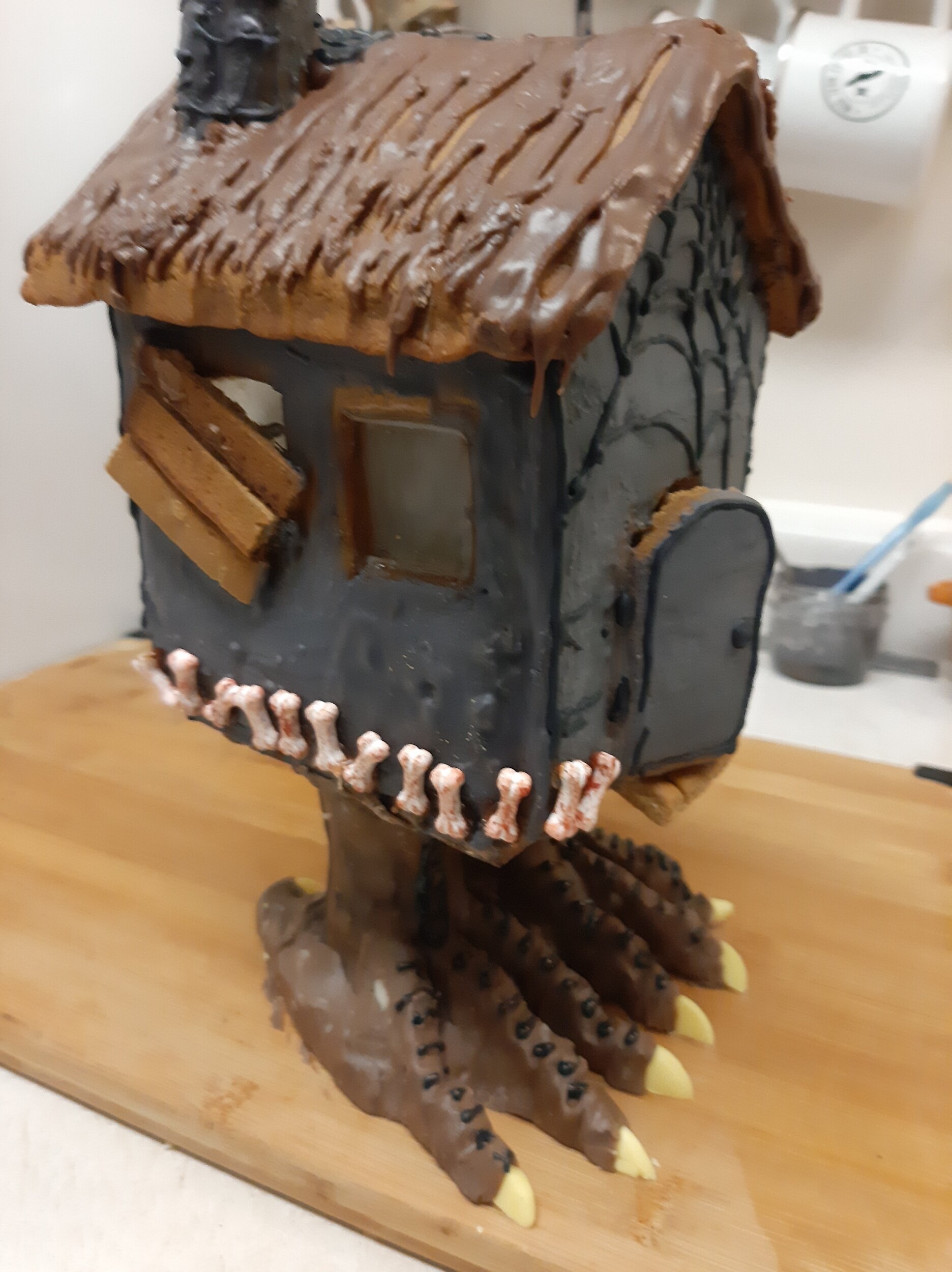 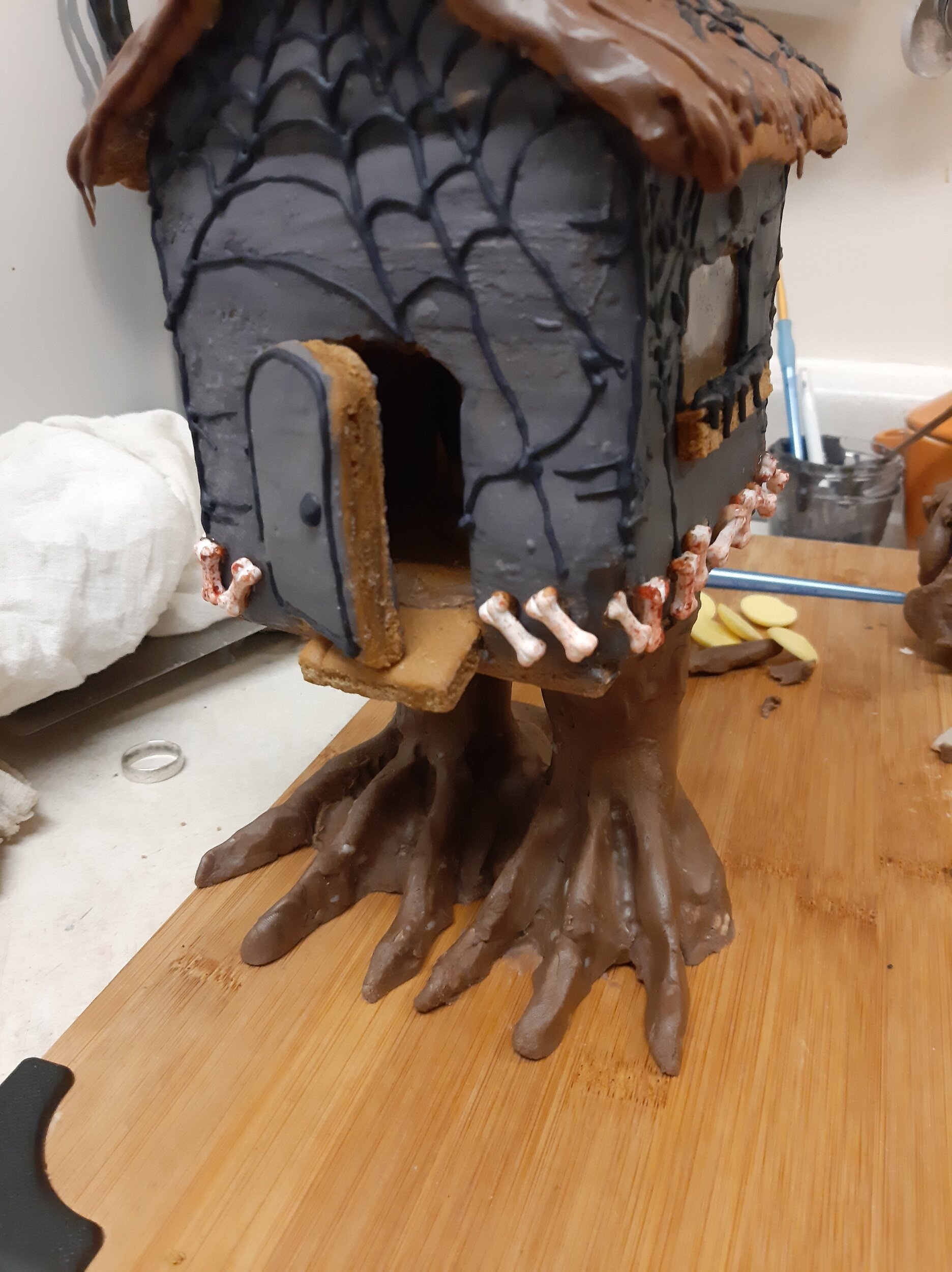