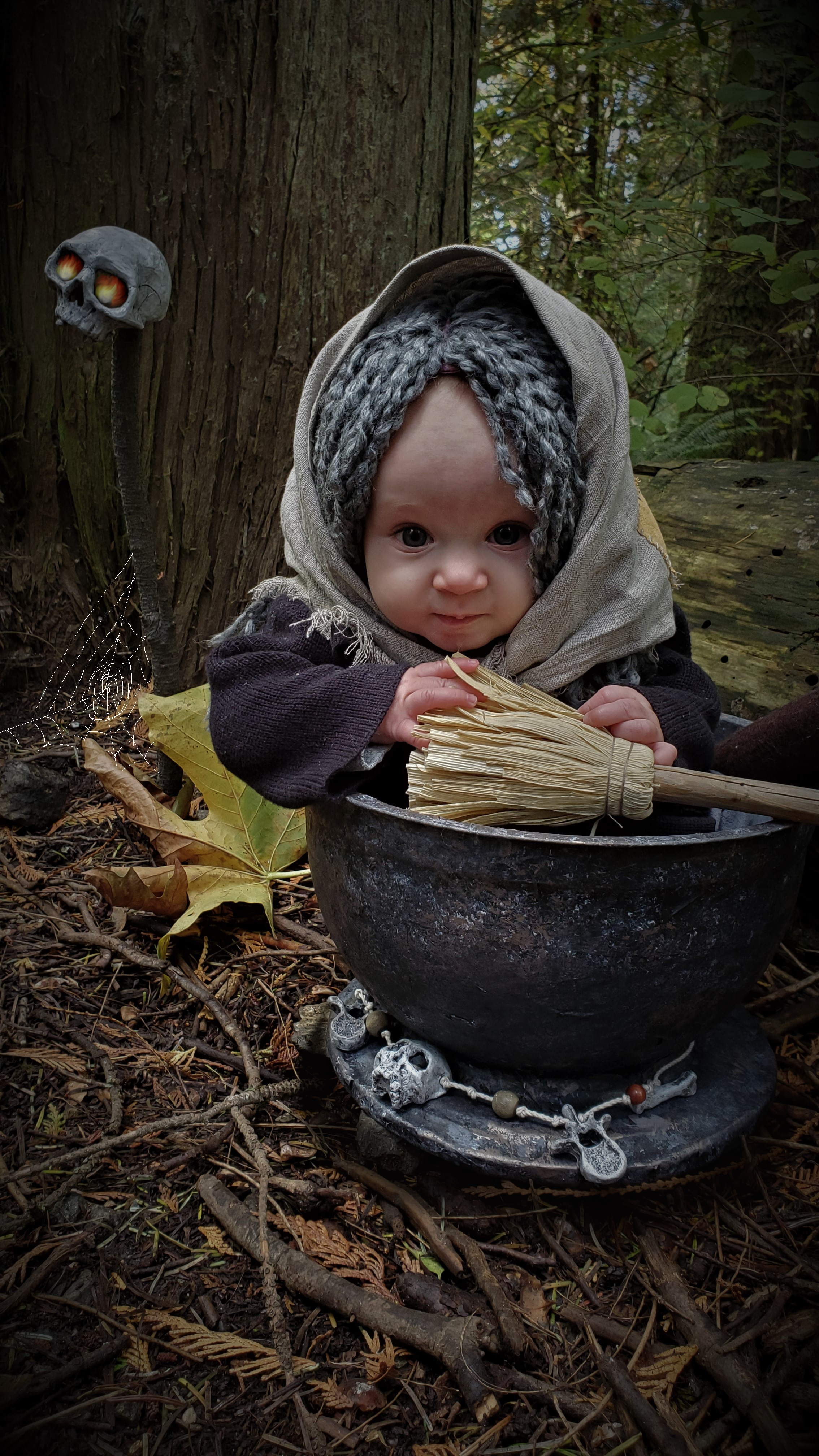 Ever wanted to set up silly photoshoots just for fun? Here is my daughter dressed as baby Baba Yaga and killing it. Photos are all shot on my phone and edited with GIMP free software. All props are made by myself.

Baba Yaga is an old woman from Slavic folklore, a witch that lives deep in the woods in a cabin with chicken legs. She rides around in a mortar using the pestle to steer and a broom to sweep away her tracks. She is a very familiar face turning up in many stories, sometimes she is the focus and sometimes she is in the background but she’s always somewhere. In some tales she is particularly evil and in others not so much. There are even stories where there are three Baba Yaga’s all sisters.

I find Baba Yaga a fascinating character and one of the things that is the most enticing about Slavic folklore. She is also probably the most famous.

This photoshoot took quite a bit of prep, all the props being built over the last week felt so small once they were all packed in to the bag to head off to the woods. It took me several days to get everything made then, the actual picture taking took under an hour. So between the prop building and the editing the part that took by far the least amount of work was the actual pictures. They had to be taken fast, it’s a lot to ask a 5 month old to be calm sitting in a bowl wearing a wig. She put up with quite a bit but was happy once we finished.

I don’t have much to say on the taking the photos themselves and I have already talked about building all the props. The skull and bones around her mortar are made from polymer clay which I did a tutorial on HERE. The rest of the props built; the yarn wig, mortar and pestle, linen headscarf and broom are all lumped into another post just doing a simple overview of them HERE. So, the last thing to talk about is the editing.

(update: months later editing this blog and remembering the work that went into the props and just shaking my head. Anything for a cute picture)

Since we had some time constraints and I didn’t want to deal with the trouble of taking pictures in low light, we set out to take these mid-morning. Of course this meant that the woods were beautiful, bright greens and oranges with sun speckled through the leaves, a perfect fall day and not at all what I was looking for. There was nothing I could do to completely change the atmosphere but I was able to get a darker feel to the pictures with some general edits.

Part of my intention with this photoshoot was to get her sort of flying or hovering in the air a bit. This meant lots of editing. Even putting the mortar up on a log meant someone had to be holding onto her so each photo had someone’s arms that needed to be edited out.

I am still getting used to using editing software so just like everything else it was a learning experience. For some of the photos I had taken an extra photo of the area with no one in it so I could replace the background completely. In others I had to do some funky work with patches of greenery. The first one took a really long time, but by the end it was going pretty fast. Some of them you can hardly tell there used to be a person there.

Starting to get upset!

I also added in some fun details in some pictures, flames in the eyes of the skull lantern and lots and of spider webs.

I think they turned out well, I am happy with the amount of work that went into the project and the pictures I got out of it.