This is the second half of sewing the bat costumes. There is still more to come on these costumes, the bat mask was done first then the sewing and still to come are ears for the baby, and my costume. In this post I finish up the kids suits.

The main piece of the body was done with a single simple pattern piece in the first part of this project, Here. All I needed for this part were 2 cut outs of the pattern, one rectangle for the neck, two for the legs, two for the arms and two for the bottom flap. Each of these was measured as it was needed after the main body was sewn.

This fabric is very stretchy in one direction and slightly stretchy in the other so I had to keep an eye on which way the stretch went for each piece.

For the body pieces I had the stretch going across the width. This meant the obvious grain went up and down.

You can see in the picture below my finger points in the direction of the grain.

I sewed the body pieces together at the sides and the shoulders only. Since both of these costumes needed diaper access I left the bottom seam open. I used an overlock stitch on my sewing machine for this whole project. 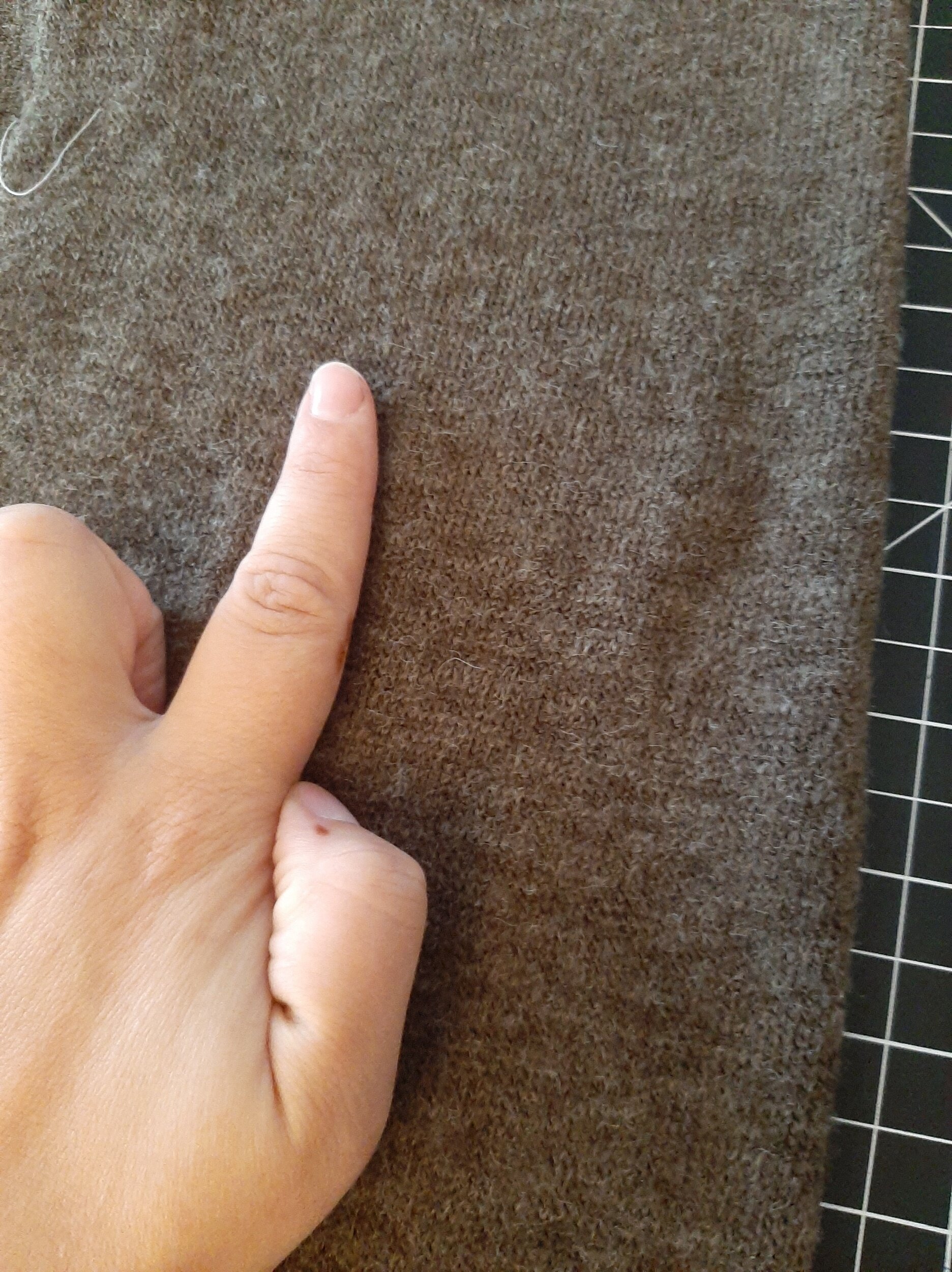 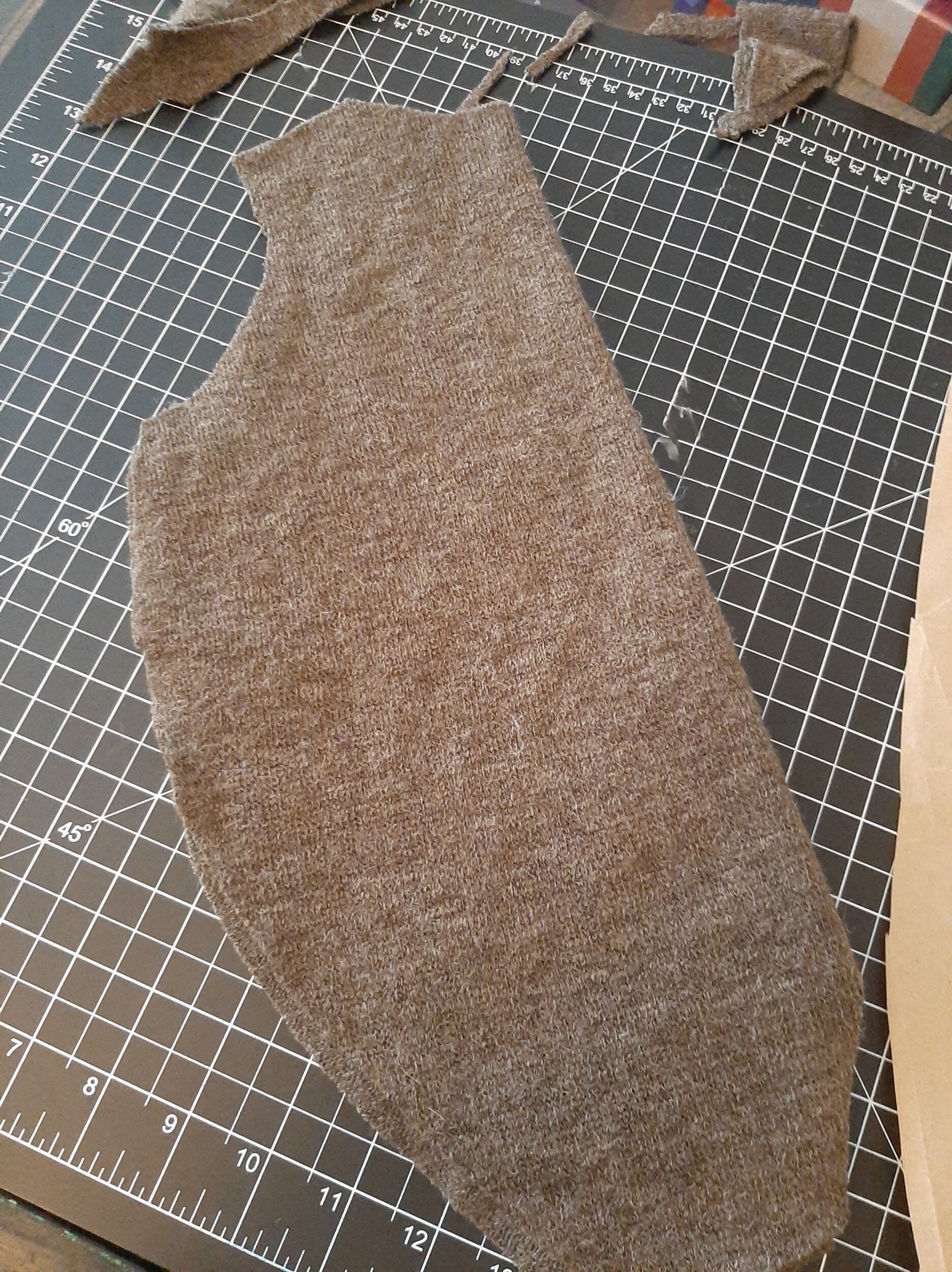 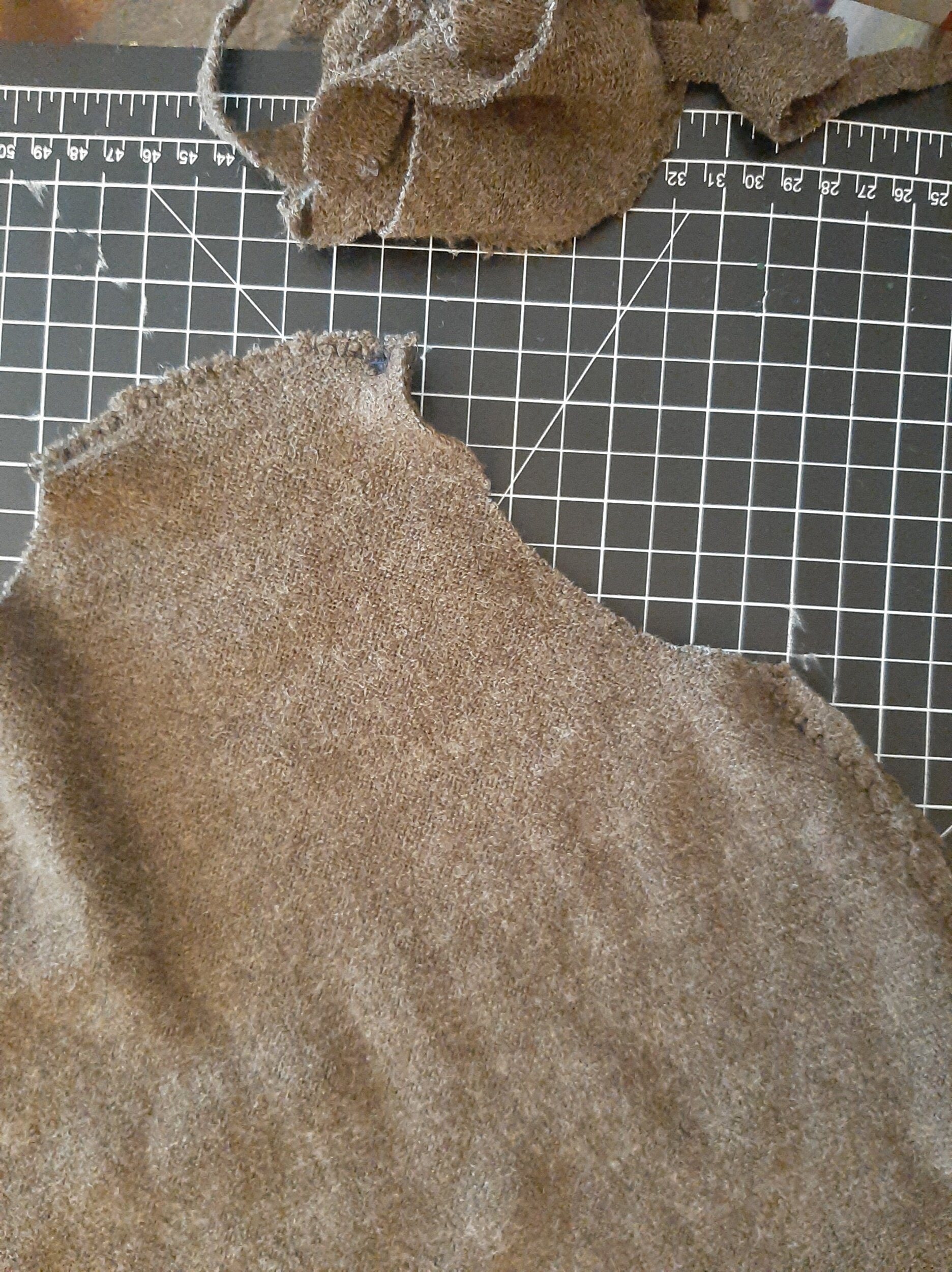 With my body sewn together I measured the length of the bottom seam and cut myself two rectangles matching the length and 8cm wide. I used the same width for all the cuffs on both the toddler and baby suit. For these pieces I had the grain running lengthwise, making the stretch across the width.

I folded them in half and lined up the raw edges of the rectangle with the raw edge of the bottom lining it up so when it was sewn the sewn edge would be on the inside. I did this to both sides on both body suits.

Then I measured the length of the leg holes on each piece and cut myself rectangles 1cm larger than this measurement and again 8cm wide. I folded them in half right sides together and sewed up the sides. Then I turned them right sides out and lined them up with leg holes on each piece the same way I did the bottom. Pinning all three raw edges together and sewing them so when folded down it the stitching was on the inside. 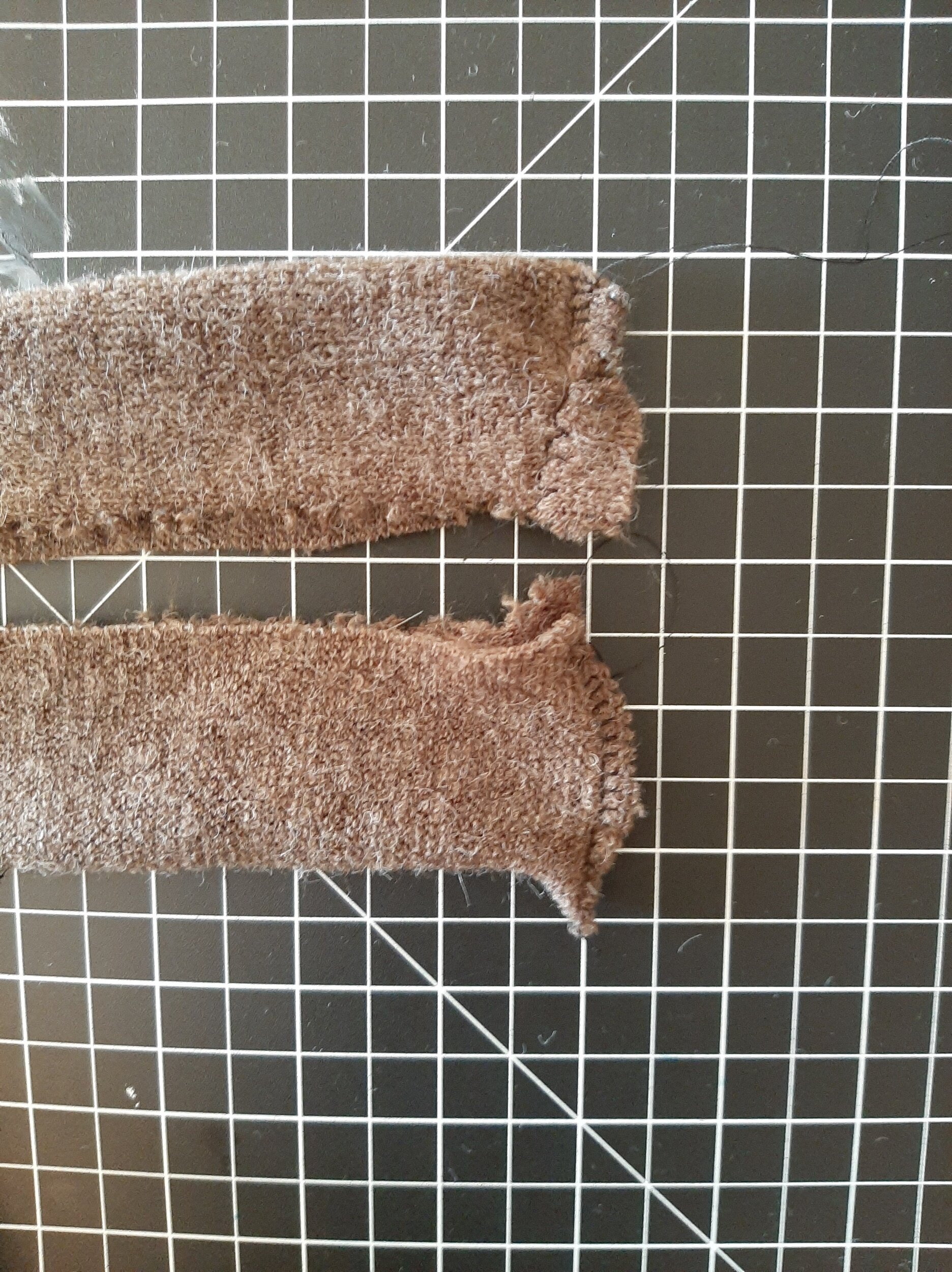 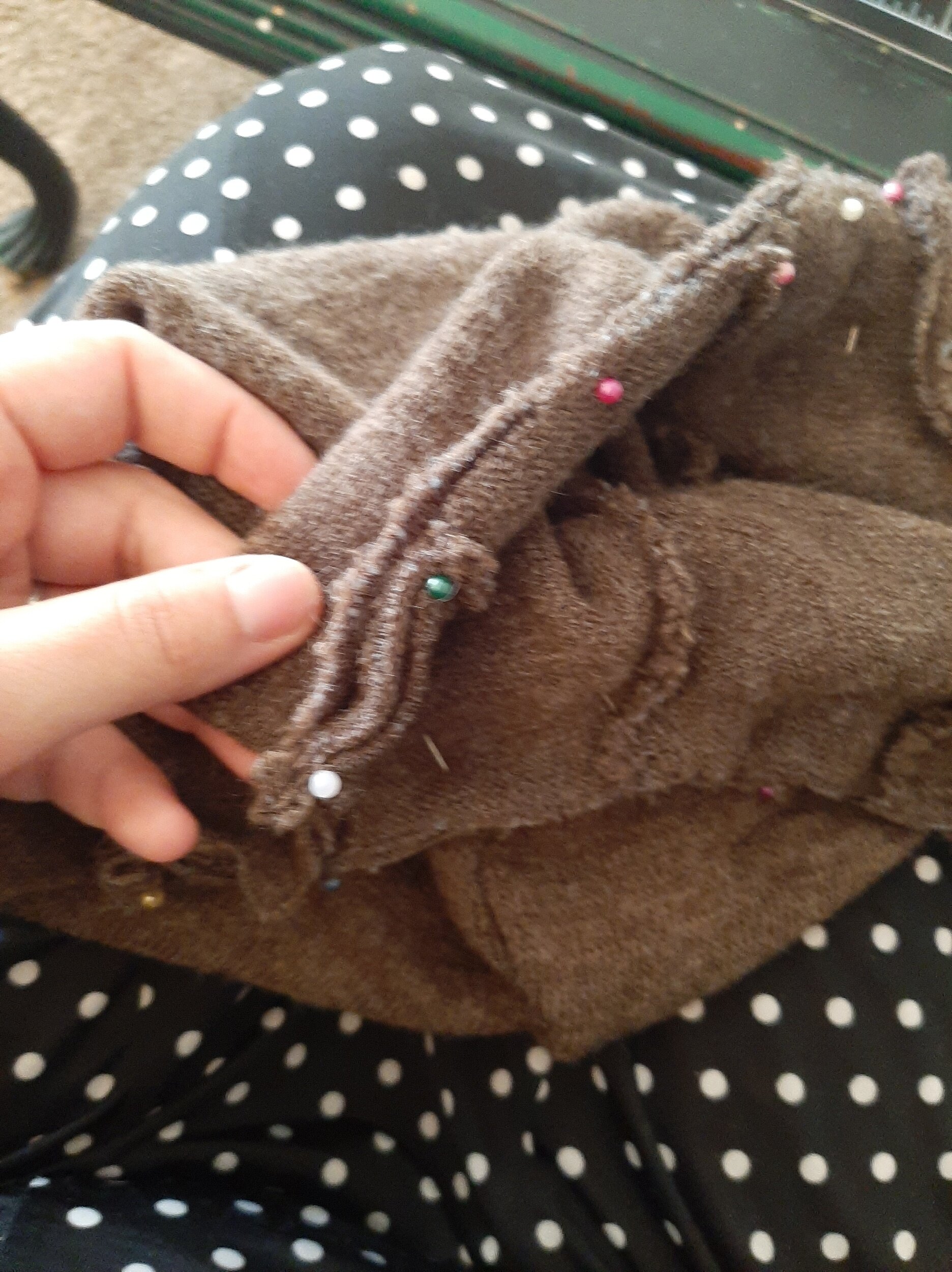 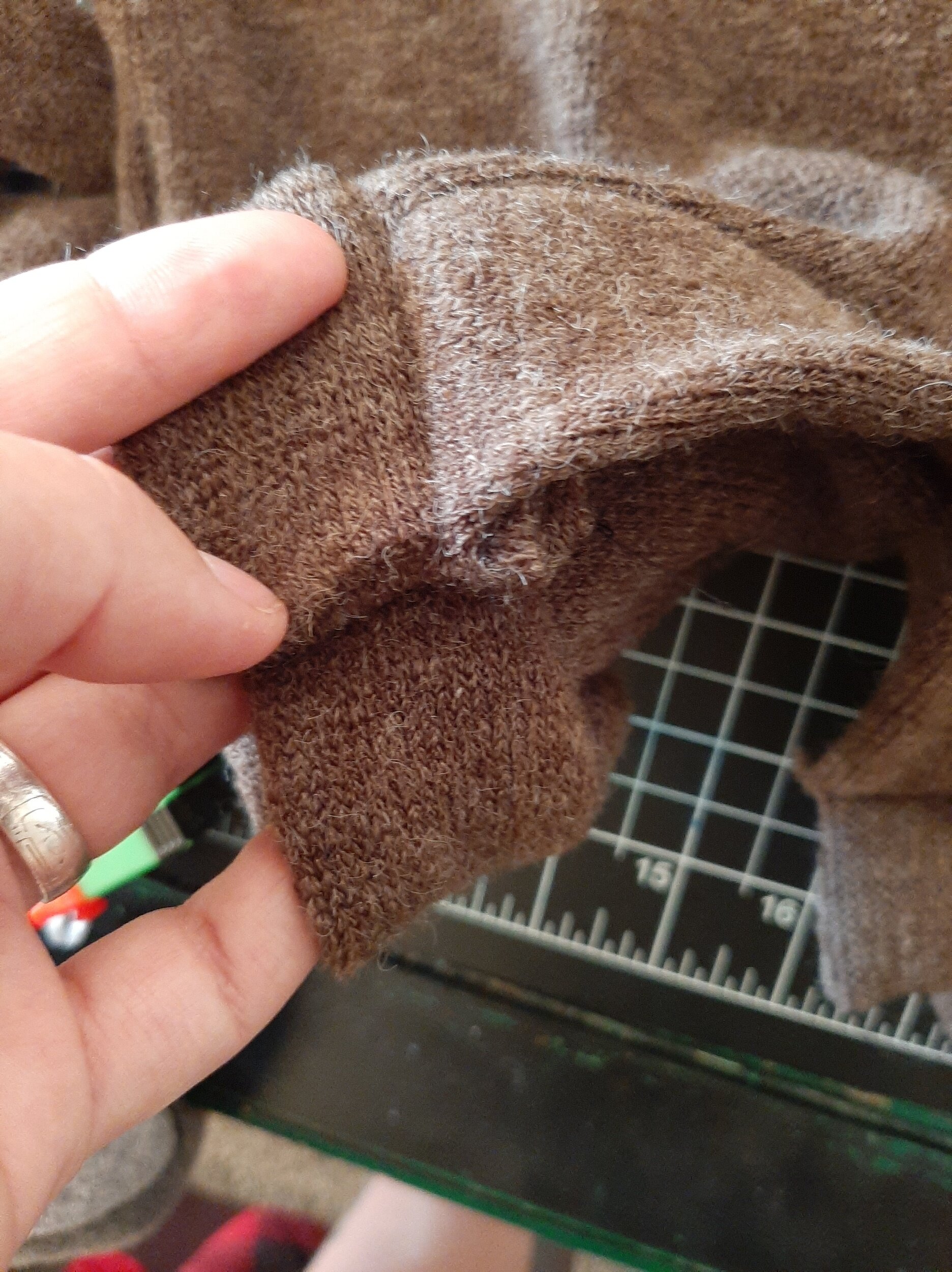 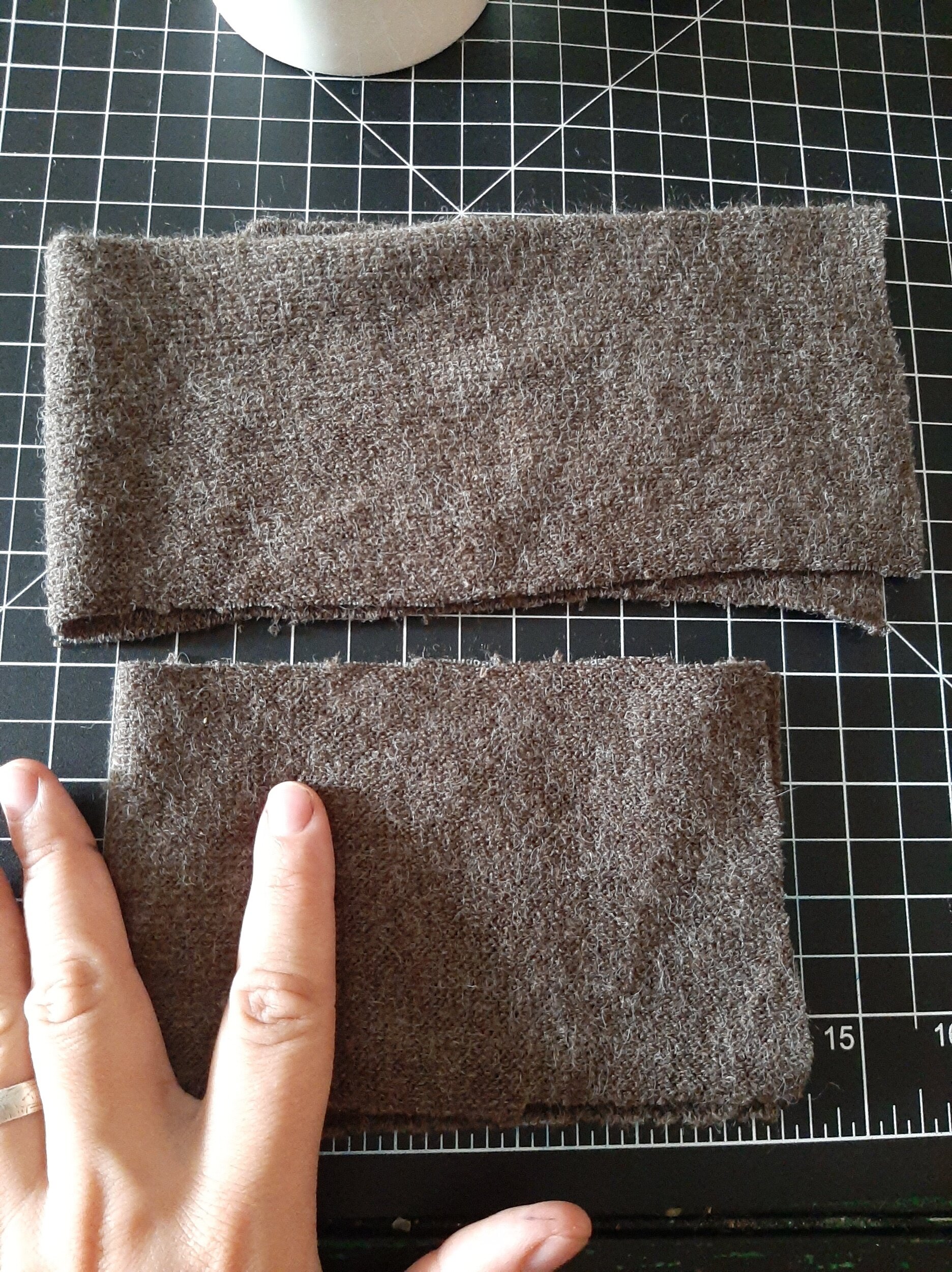 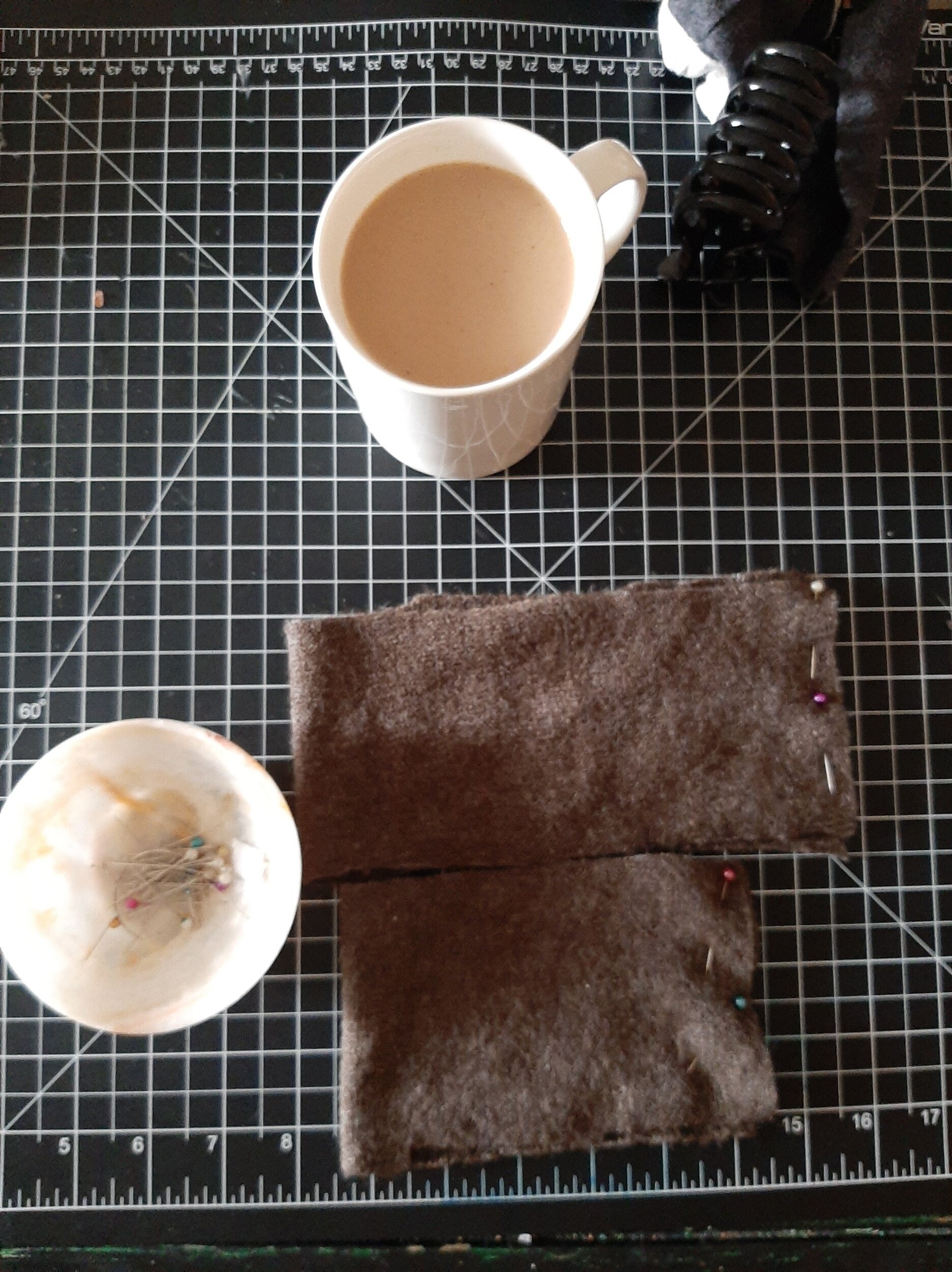 Folded and pinned rightsides together 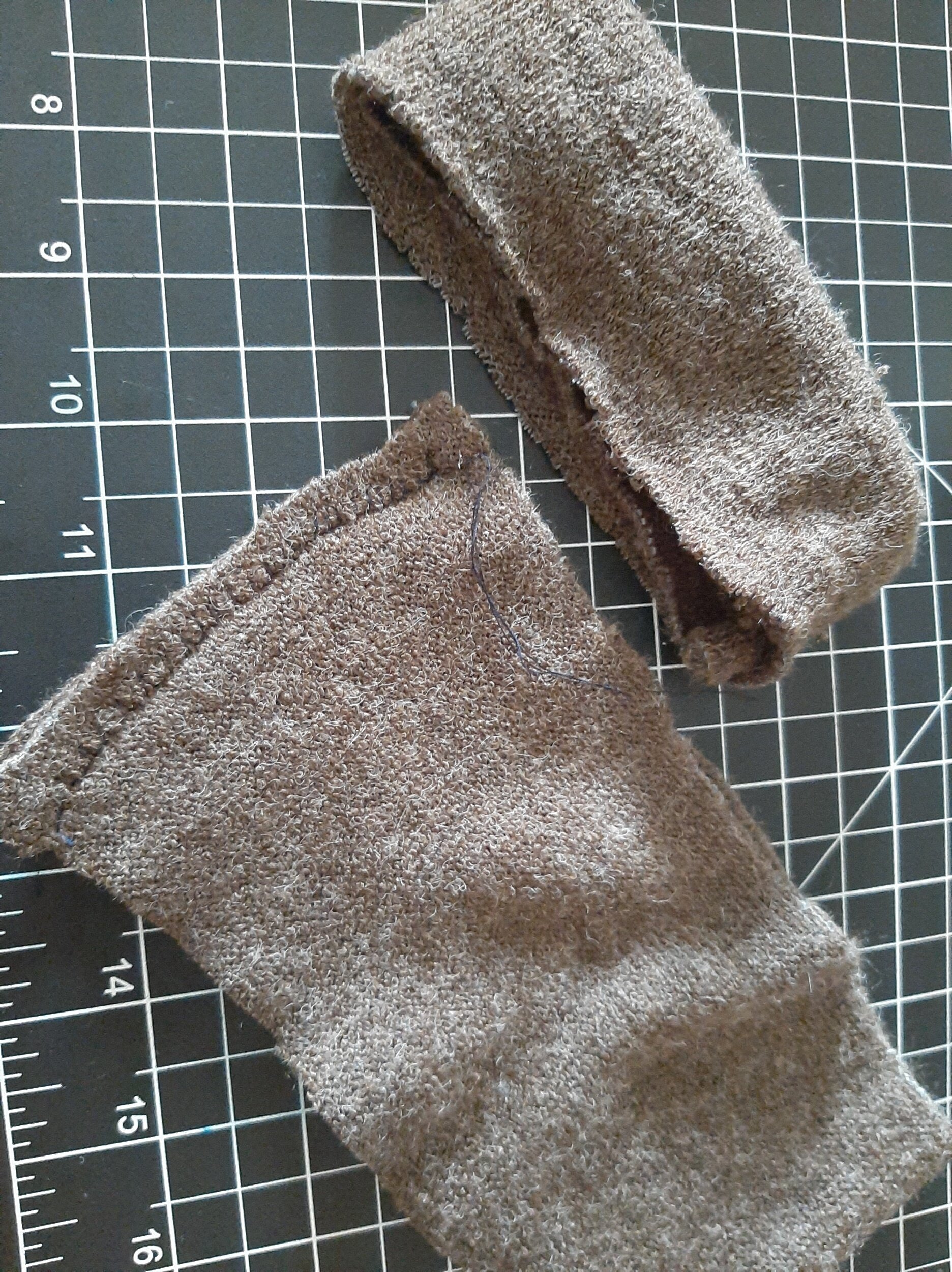 Sewn then folded with seam on the inside 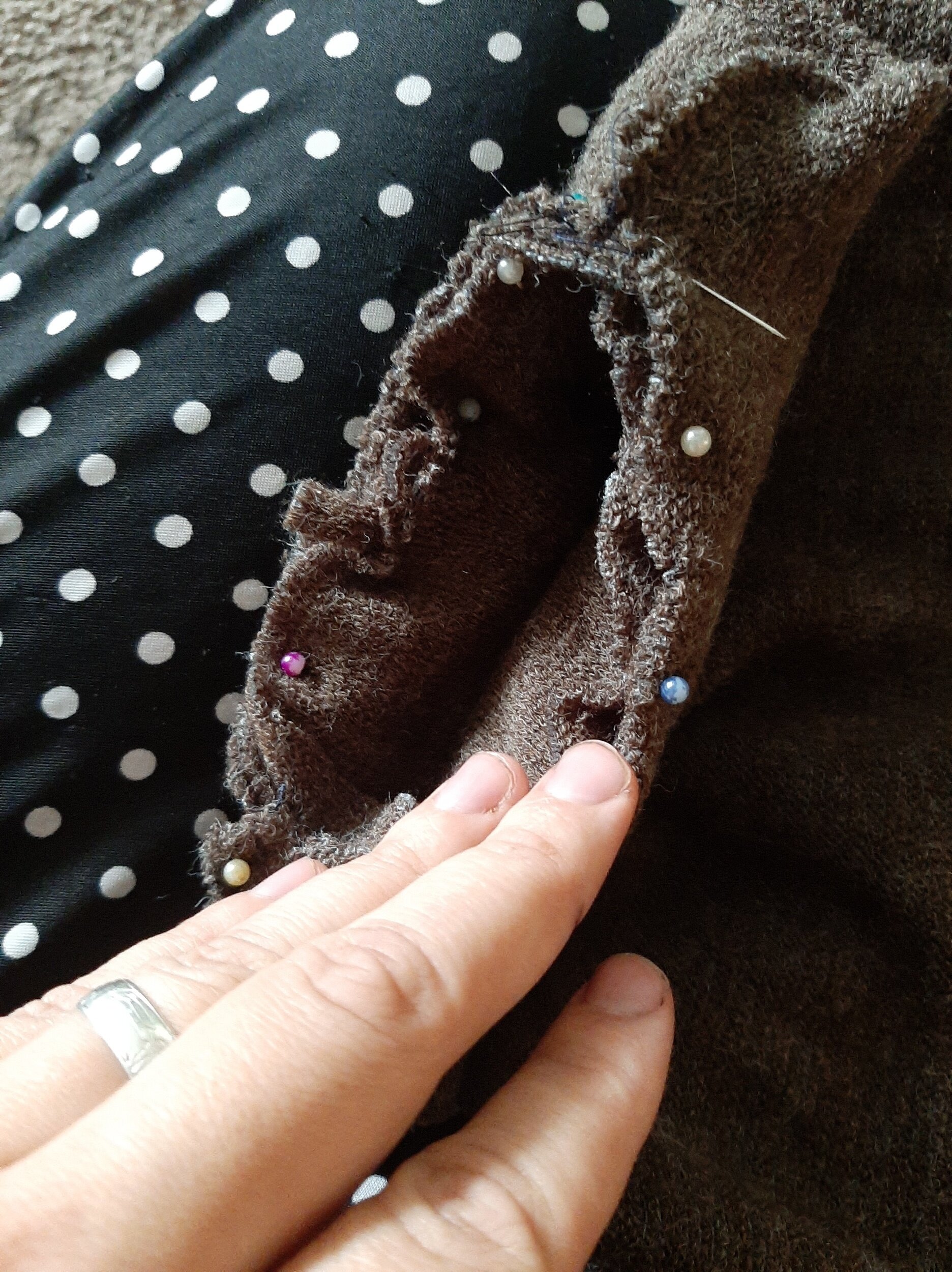 Pinned to the neck hole with all three raw edges together.

For the neck I again measured the full length and cut a rectangle matching the length adding 0.5cm for a seam and 8cm wide. For this one I had the stretch running lengthwise so it would stretch over the kids heads. This one is a circle so I folded the rectangle in half widthwise and sewed up the edge. Then I folded it in half lengthwise with the seam on the inside and lined up the raw edges with the raw edge of my neck hole, making sure the seam would be on the inside. Then I sewed around the whole thing and repeated this process for the arm holes except with the stretch of the fabric running widthwise.

This is the fully sewn body without the arms added and the snaps put in.

I re-dyed the fabric from the previous post, This time I used a dye for synthetic fabrics. It still ended up super light but this time I am just rolling with it.

With my fabric dyed and dried I hand stitched my arms into the body suit, I just sewed it to the seam where I attached my cuff to the main body. I had to stretch the arm quite a bit while sewing but it worked out nicely.

Once everything was sewn I put on some snaps around the bottom, I have a deep deep hatred for this process, probably because I am really bad at it. As usual I messed a few up and had to pry one off and after it was all said and done my husband stabbed himself on one. Good times.

The wings were cut from a piece of the white fabric used in part one Here. The rest of those pieces were going to go back in the dye bath but the wings where always going to be painted so I skipped dying them again.

I used the same method for painting fabric as I did in this post here. The fabric took the paint much differently and was definitely an experiment. I wanted that slightly stiff texture I got with the pillow in hopes that it would make it look less like fabric.

I waited until it was painted and dried before cutting it out, this made the painting part easier. I didn’t have to worry too much about how I was leaving the edges.

I had my toddler try his suit on so I could see where I needed to stitch it to attach the wings, he was surprisingly cooperative and yet it was still a struggle. I stitched a couple key points while he was wearing it and finished sewing them on after.

Have you ever tried to take a picture of a toddler when they don’t want you to? I don’t recommend it. Toddlers move faster than shutters. Once everything is done we will go out and take good pictures.