The origin of Valentine’s day isn’t super clear. We’ve heard of St. Valentine but there are actually a couple different St. Valentines said to have an association to February the 14th. There is also an old Roman festival that took place February 13th-15th.

This was the festival of Lupercalia, during this festival a Goat was sacrificed and its skin cut into strips to be used as thongs or whips. These thongs were used by the priests of Lupercalia, the Luperci, and these young men would run around nude or wearing a goat skin loincloth, whipping people in the streets. To be touched by one of these goat skin whips was thought to bless a women with fertility in the coming year.

It’s contested by many that the origins of Valentine’s Day doesn’t have anything to do with this festival but I don’t think it’s much of a stretch to see the ties between love and fertility.

I’ve always liked decorating with nice white roses splashed with blood, it’s such a great contrast of colours and themes. So here are my cookie hearts and roses in white, splattered with dark red blood and stamped in goats. The themes of Lupercalia are not so subtle here.

I used this basic sugar cookie recipe Here which is the same recipe I used for my turkey vulture cookies, found Here.

The first cookies made are stamped cookies. I used a wide mouth jar canning ring to cut a circle and a wooden goat stamp. Stamping is easy once you figure out exactly how much pressure is enough. This takes a couple tries, so be patient with it. I used a regular mouth canning ring to gently stamp in the border.

Once baked, I sprinkled them with icing sugar and used a finger to rub it in. This brings out the image that was stamped in and adds the extra sweetness on-top.

The others were cut into hearts. I am not a huge fan of the heart cookie cutter I have so after they were cut out I pinched the bottom gently and used my nail to point the top center a little more.

I made a couple with red velvet favored chips in them, these ones were pressed into the cookie cutter instead of rolled out. It’s not as clean of a look but makes it so you don’t have to cut through chips.

The hearts were decorated using a medium royal icing, about 1 egg white to 2 cups icing sugar.

First the border is drawn on, then it’s filled in, spreading the icing around a bit so it’s not too thick. Once it’s all filled pick up the cookie and gently tap it down on the plate, this will level it out and help move any air bubbles. The thinner your icing is, the less this step is necessary but I like to use the same icing for the border and for flooding. 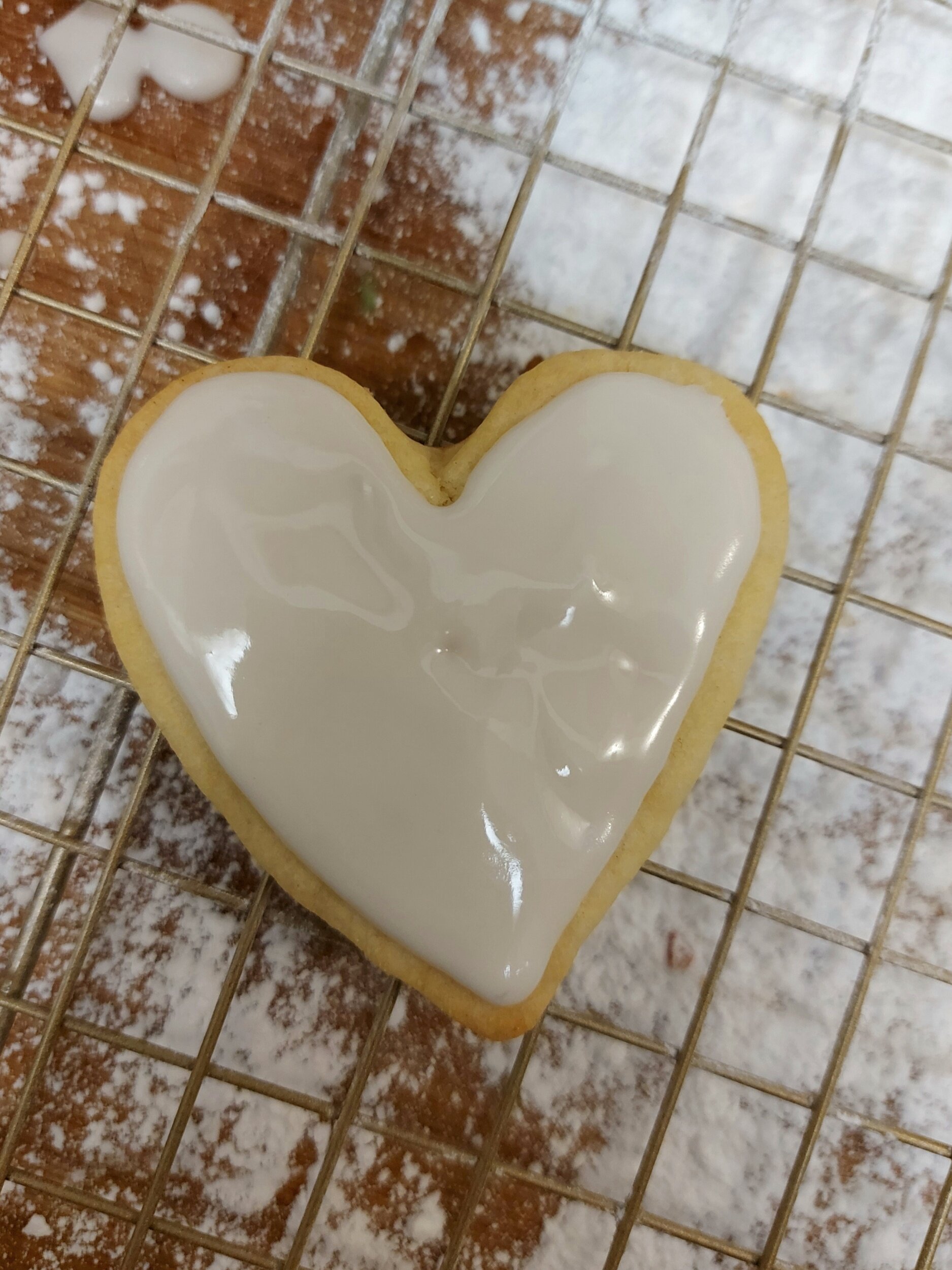 Filled in
After tapping

A few of the cookies got white roses as well, I simply added some butter to the remaining white icing to help it hold its structure and made the roses.

Once all the cookies had their white decorations done, the next step is the bloody one.

I used the same royal icing which I had set aside at the beginning. I thinned it out with some drops of water. Be careful to add water or other liquid only by the drop, the icing thins out very fast. You want it runny but still thick enough that it’ll set up, too much water and it won’t dry.

To get the strong red colour always use gel. Liquid is ok for other colours but it’s really hard to get a good red either way and nearly impossible without gel food colouring. I used red Winston’s gel coloring with a tiny bit of black to help darken it up. The black will change the colour very fast so use it very sparingly, you can always add more.

Once I had a rich red I used a spoon to drip the red icing over my cookies. This is the fun part, you want it to be messy and erratic. Each one has a varied amount on it, some with lots and some with a little but nothing uniform. A couple were half dipped in the icing blood adding some interest to the grouping.