This recipe was a little bit experimental, I use this one often but decided I wanted to make it chocolate this time. Most doughnuts that are chocolate are baked cake doughnuts rather than a yeast dough that’s fried. They turned out tasty but got a bit tough when cooked too much.

When I was a kid my mom would talk about coming home from school to freshly made doughnuts, it was a happy memory for her yet she never made them herself. I always thought the idea of making doughnuts at home was this amazing yet unattainable thing. It was something my grandma could do but because my mom never did it I assumed it was something I couldn’t do. I realize as an adult that’s a silly assumption and even more so when I realized the only equipment needed to make fresh doughnuts is patients and a pot. 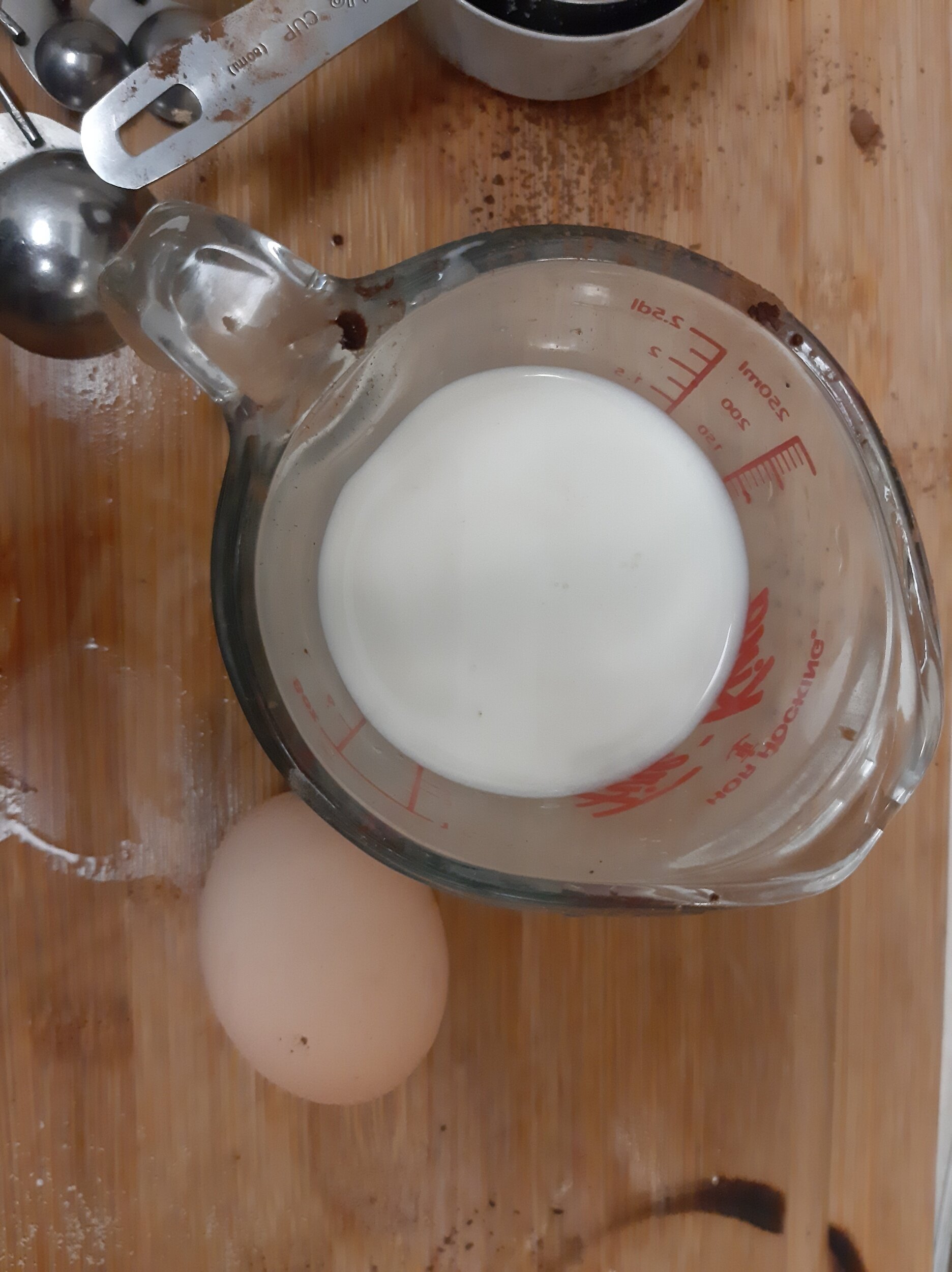 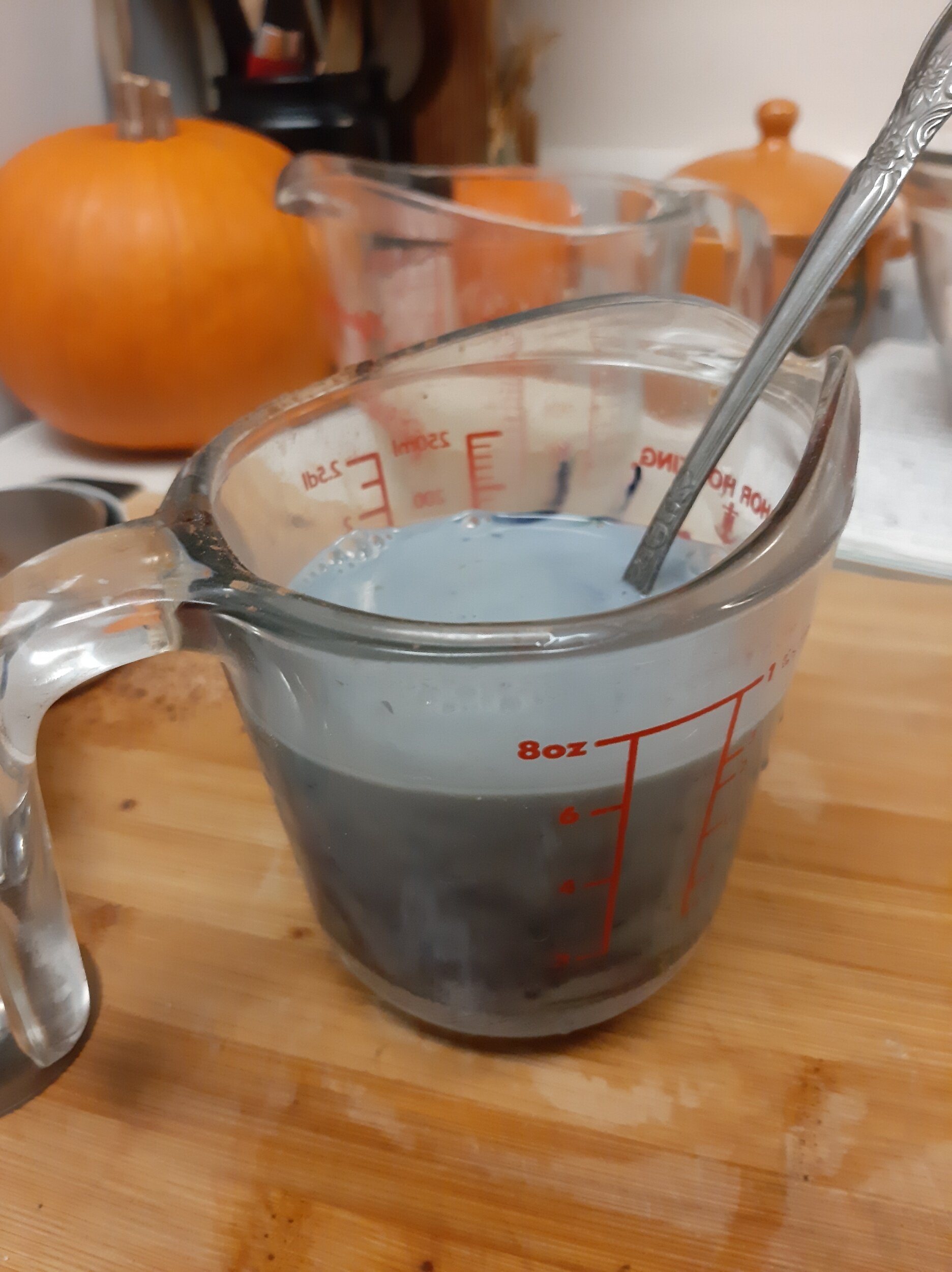 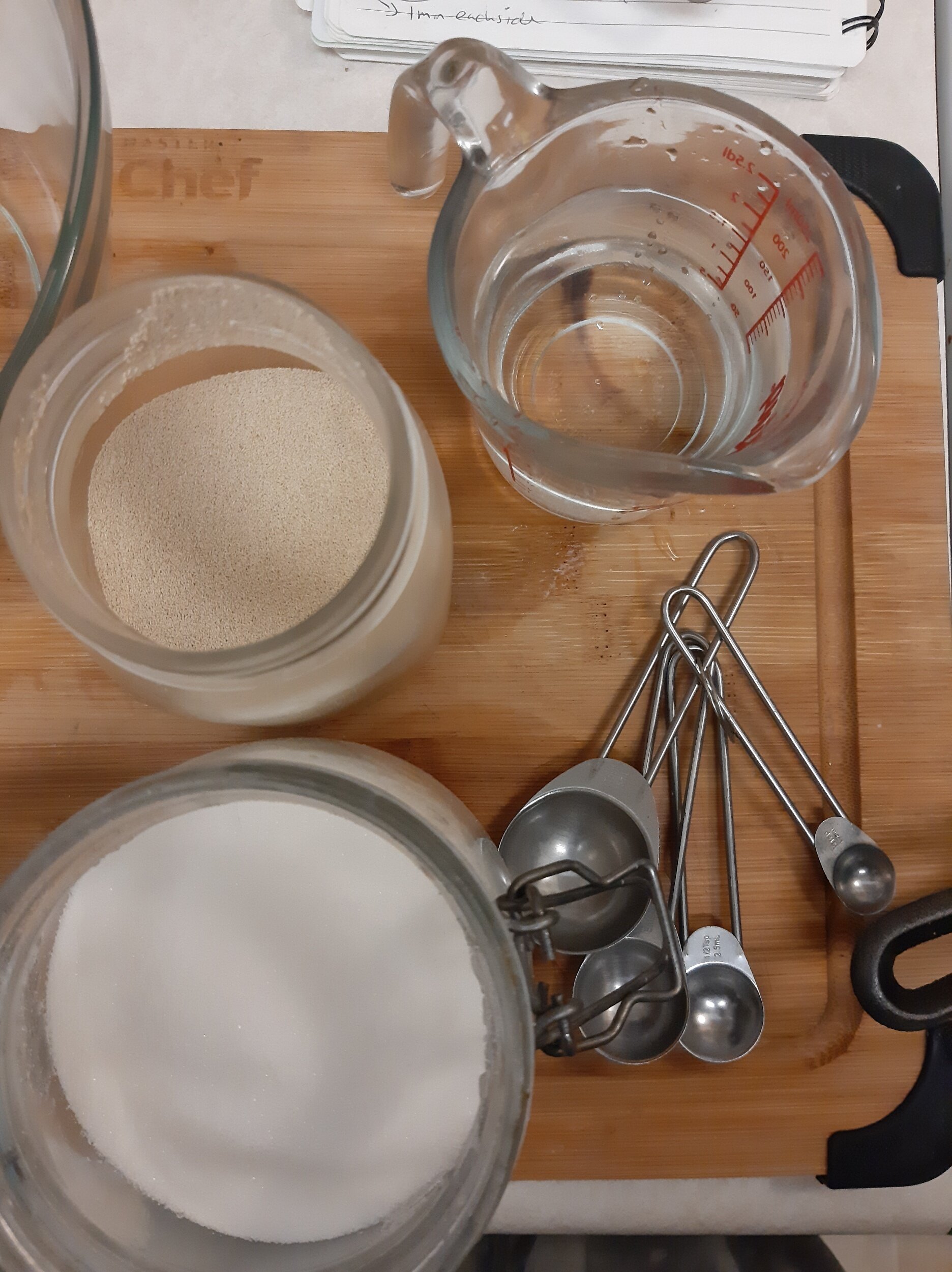 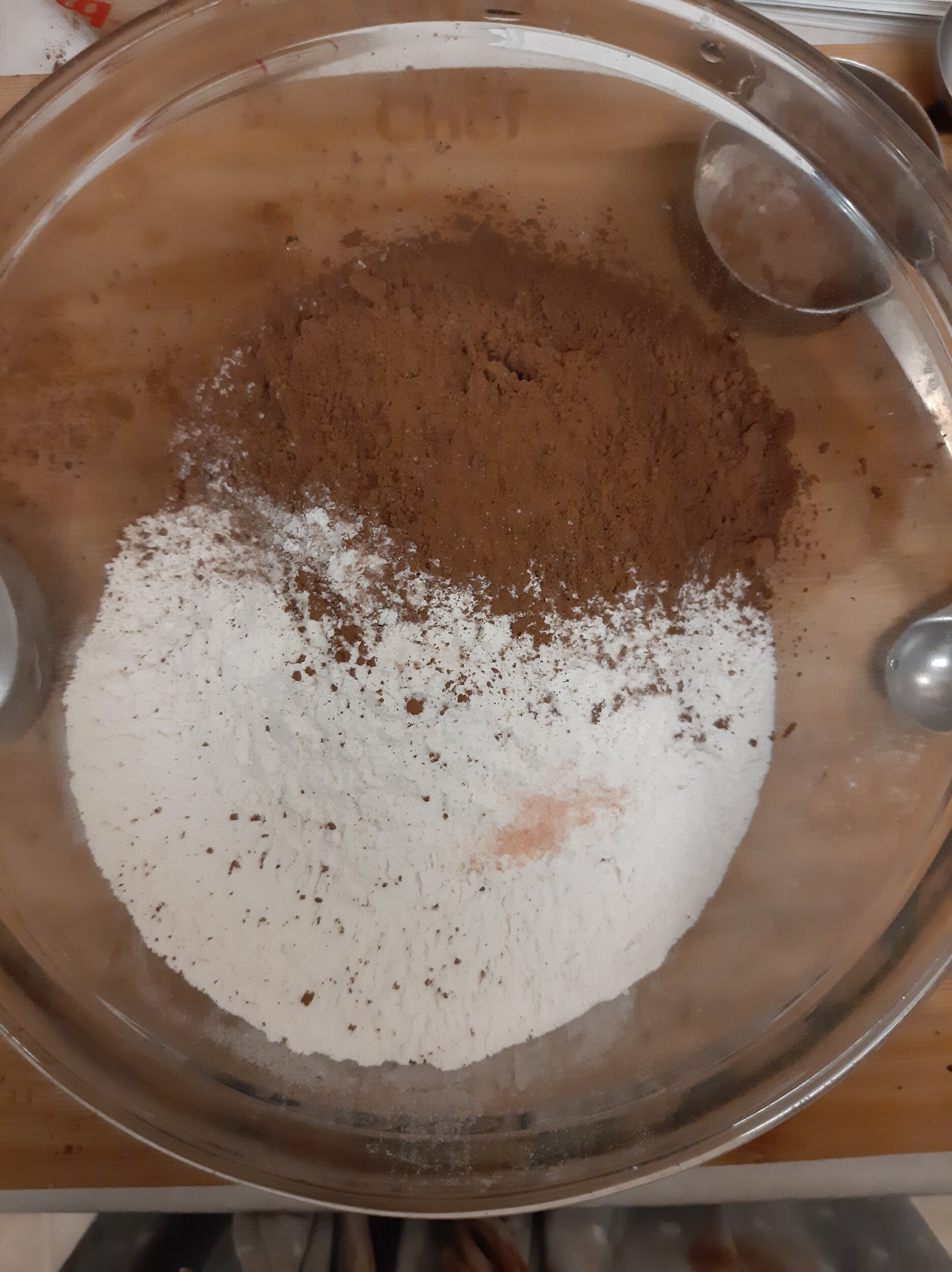 I added a little bit of black food colouring to the liquid mixture just to make it a bit darker for that Halloween feel. 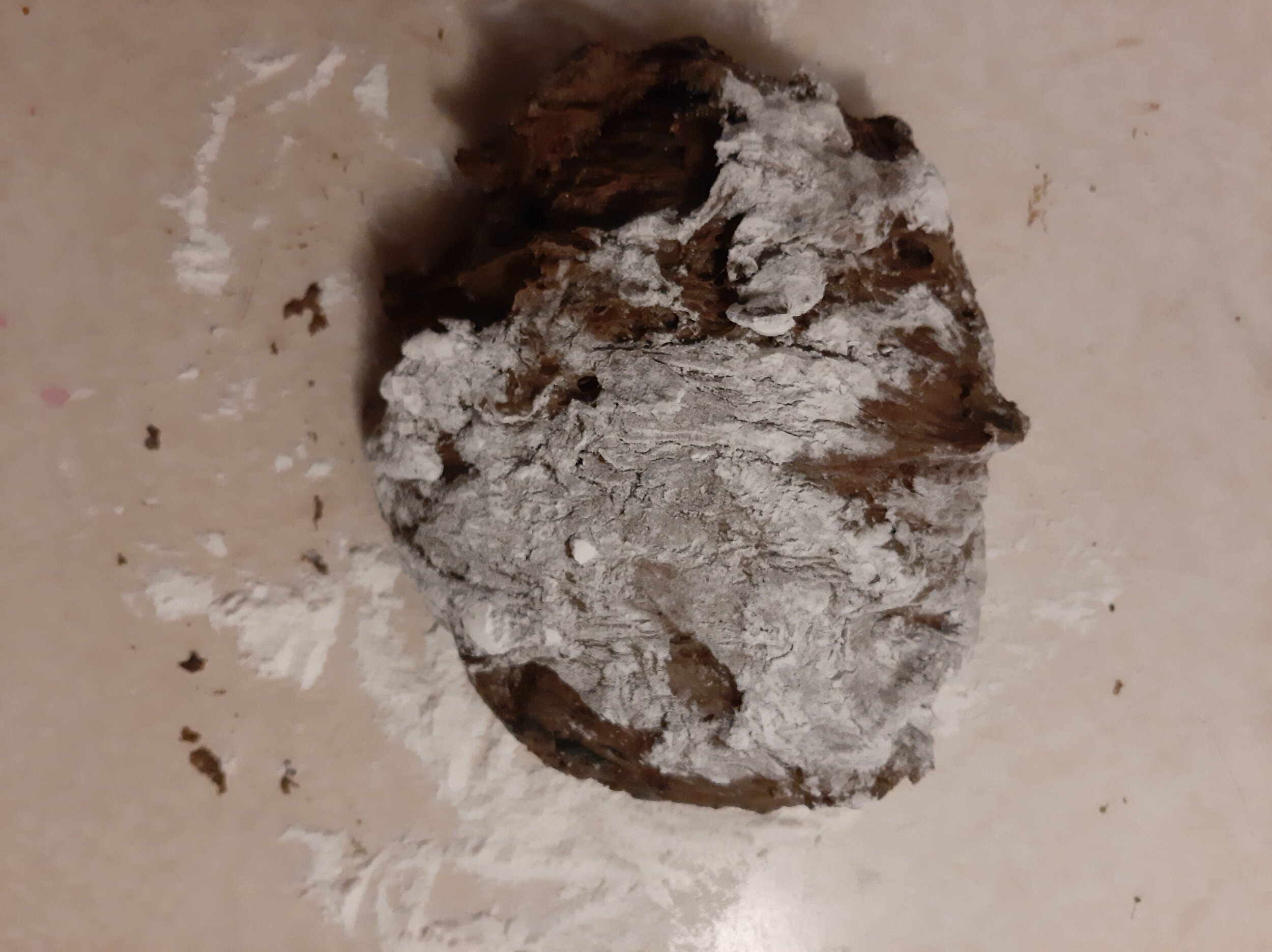 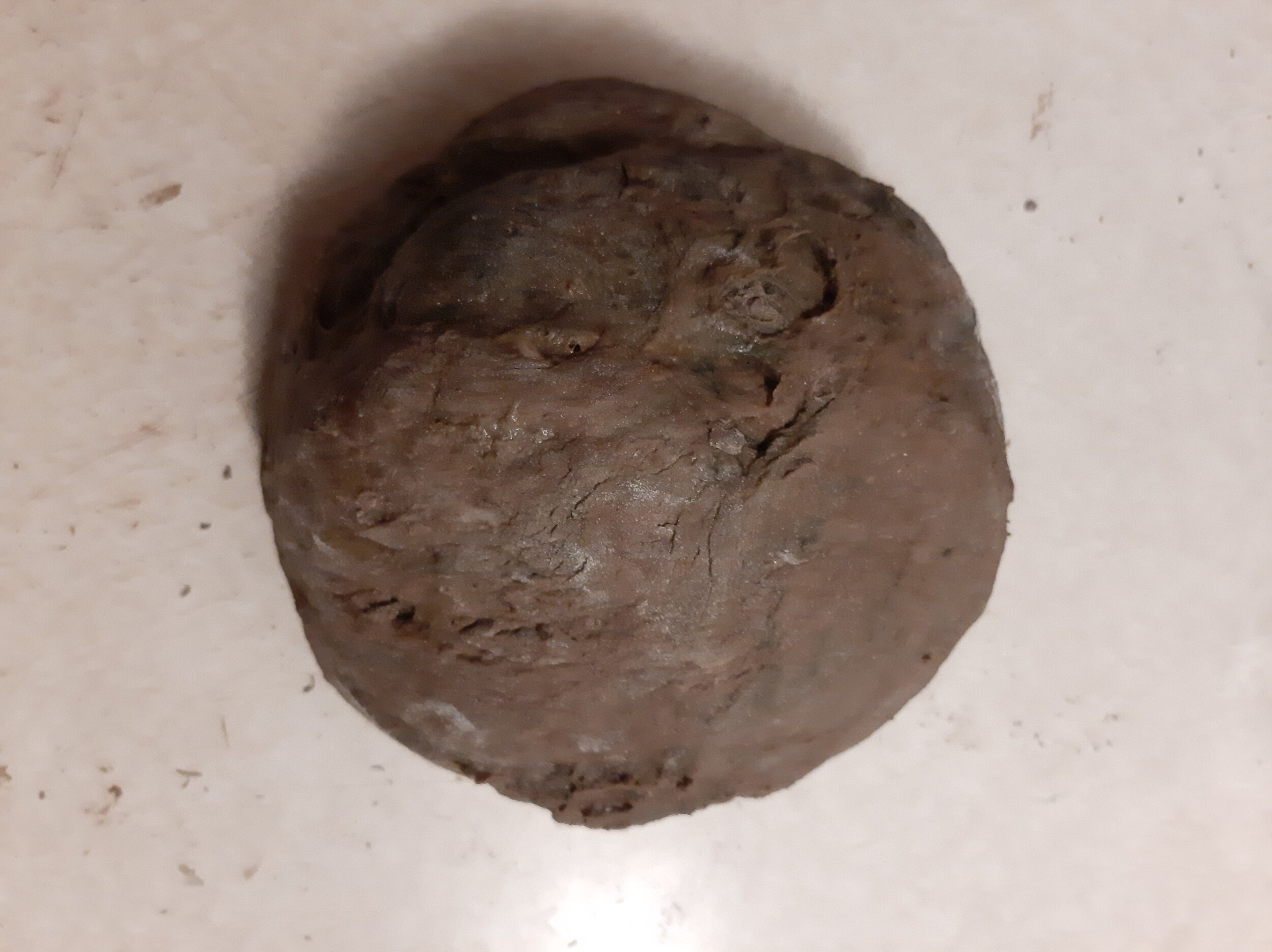 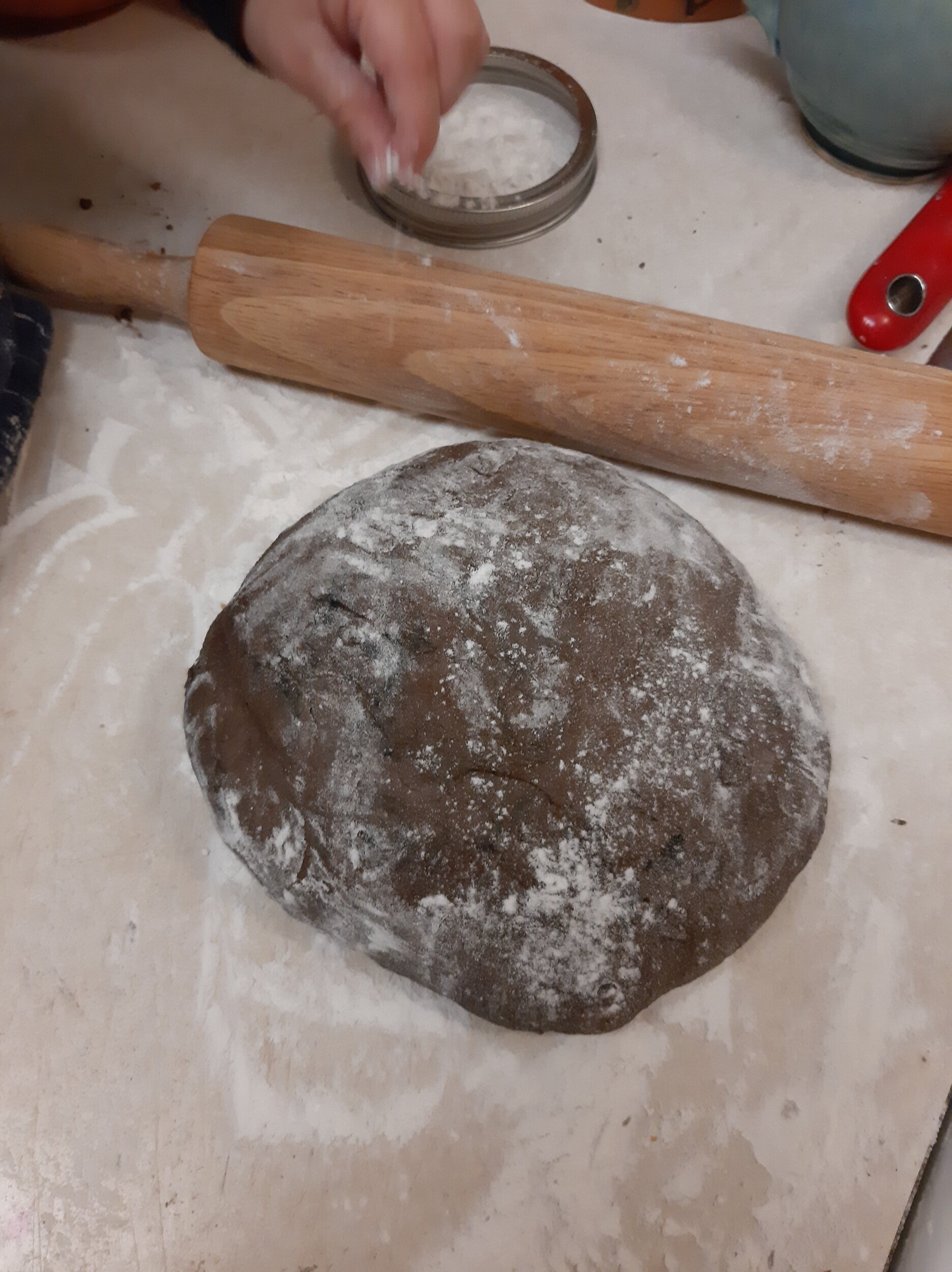 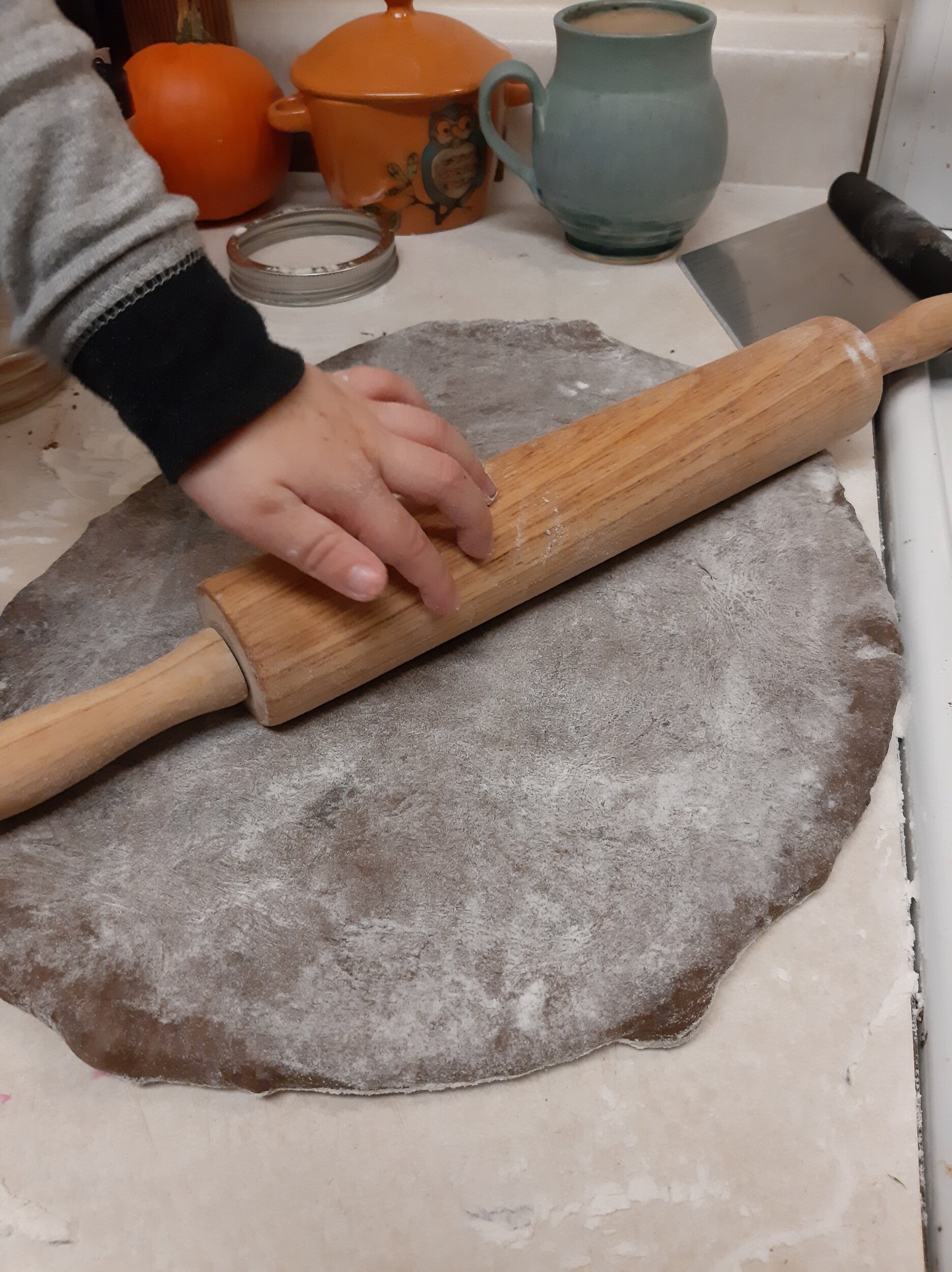 I rolled the dough out to about 0.5 cms and used a wide mouth jar ring to cut out my doughnuts. I did a mixture of full ones which would get the filling and ones with the centers removed. I used a small bottle lid for cutting out the centers. I had lots of toddler help with this, so some are more wonky than others. 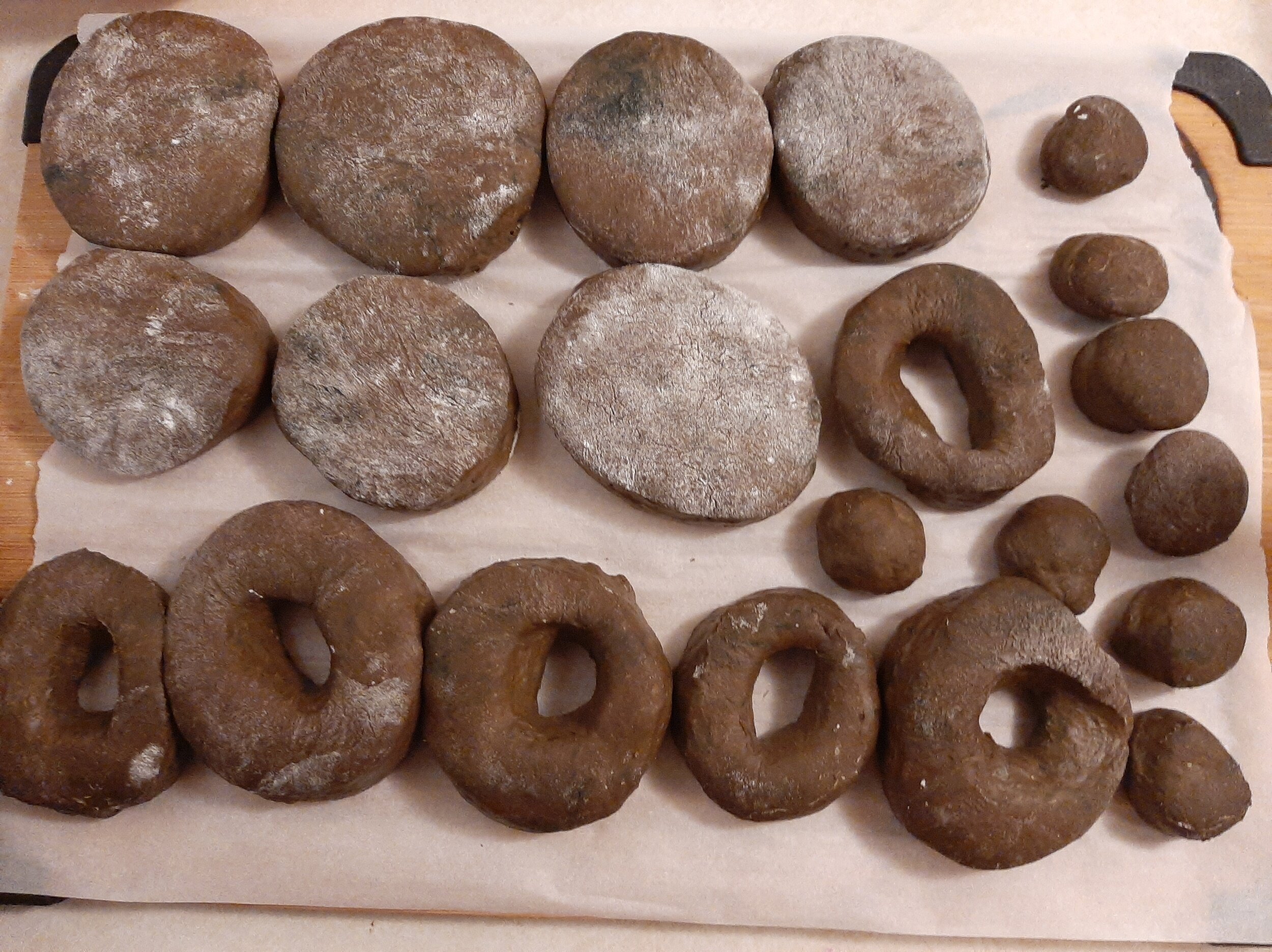 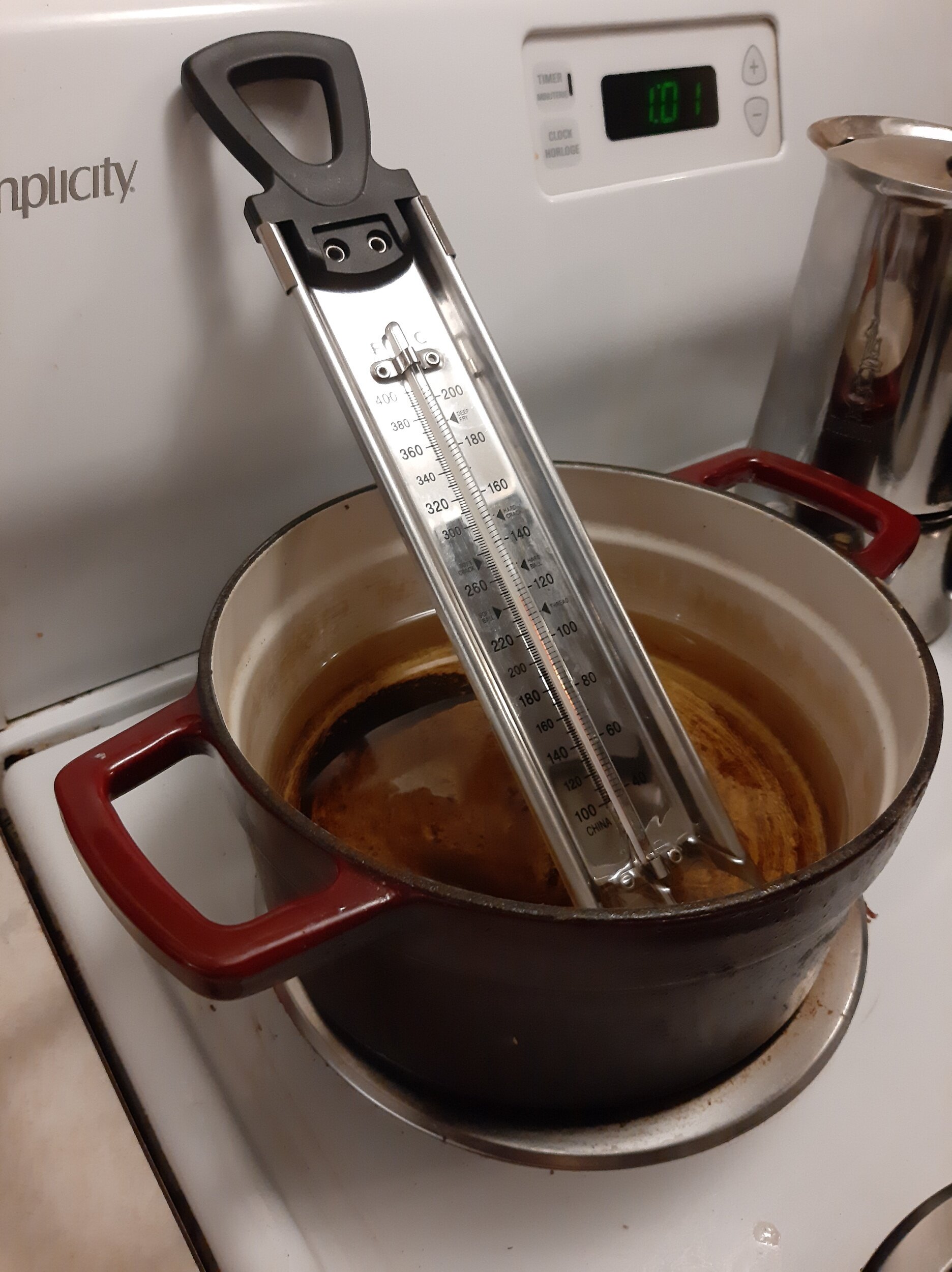 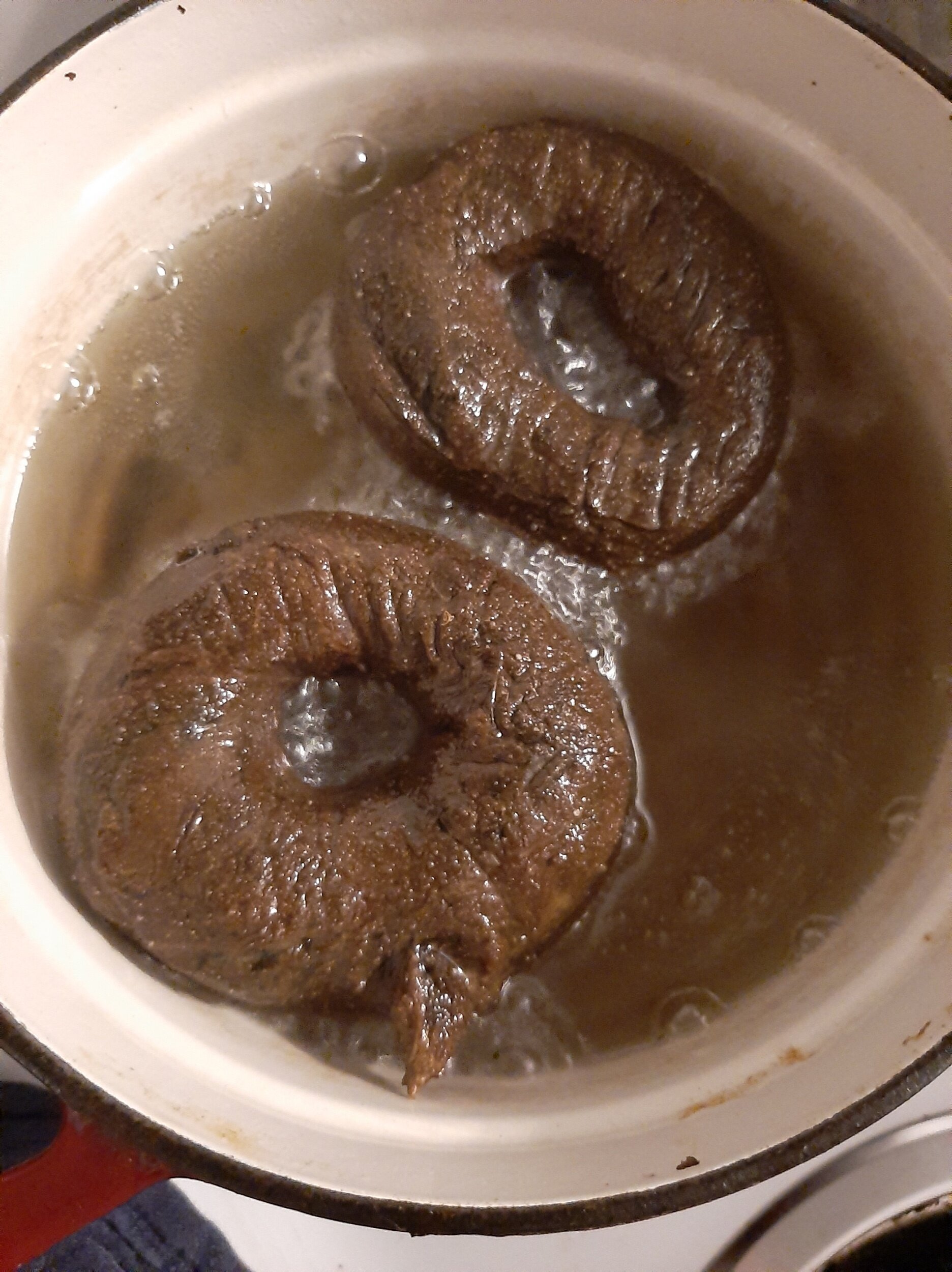 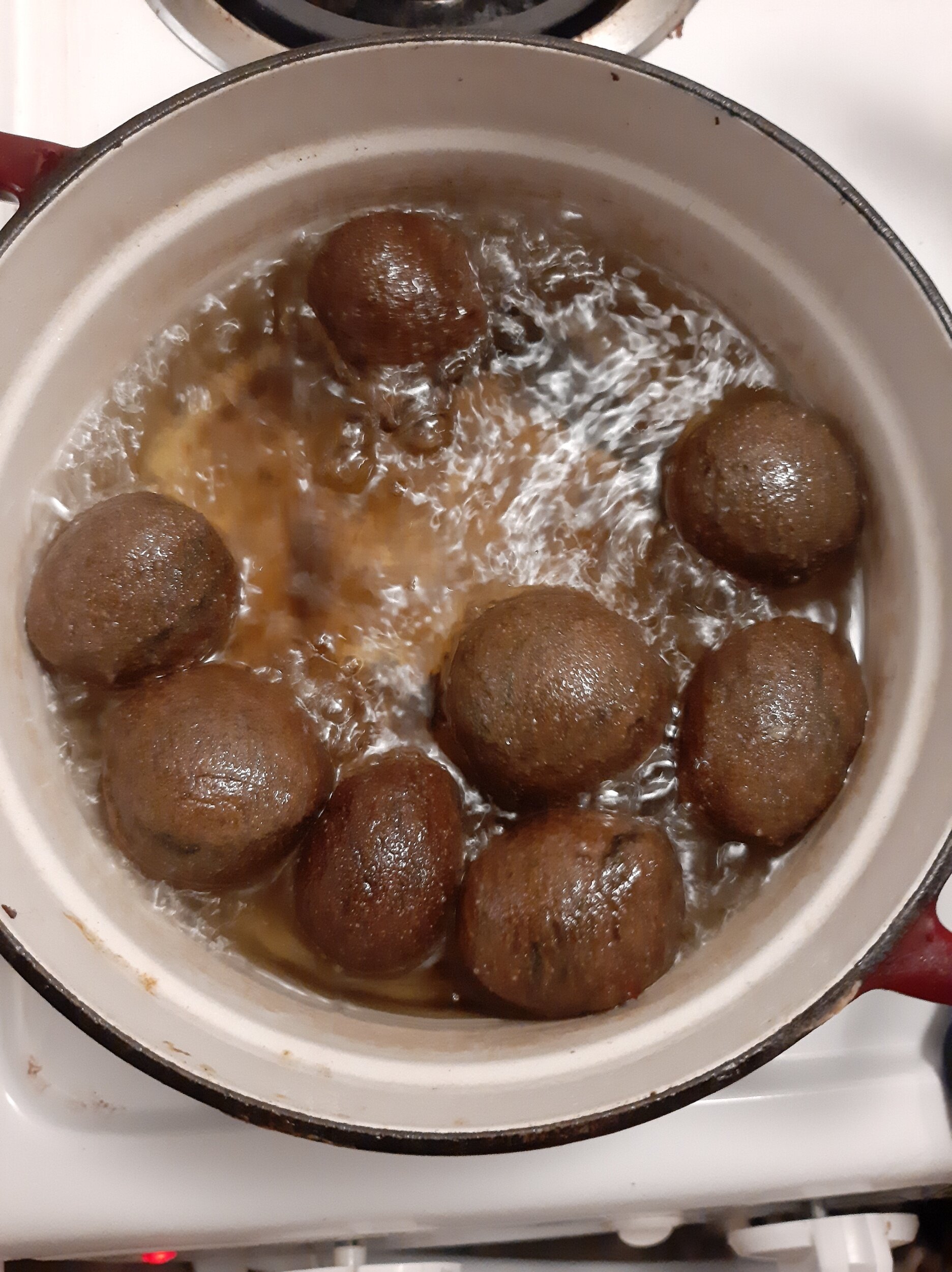 I used three different glazes. I prefer my doughnuts with a super basic glaze made, just 4 parts icing sugar to 1 part milk, so I made a small batch of this. Then I made a chocolate glaze (recipe here), I made the mistake of making this before I was ready to use it so it separated and it took a lot of work to make it come back together. Even after recombining, it was not quite the same; it was tasty though. Then I made the same simple glaze I made first but with 3 parts icing sugar, 1 part cocoa powder and 1 part milk.

While my doughnuts where proofing I made my filling, I really like cherries made with warm fall spices, so I used a jar of halved cherries I had canned in the summer and mixed them with sugar, cinnamon and nutmeg, then reduced it on the stove until it was nice and thick. After it was cooled I put it in a piping bag with a wide tip and stored it in the fridge. 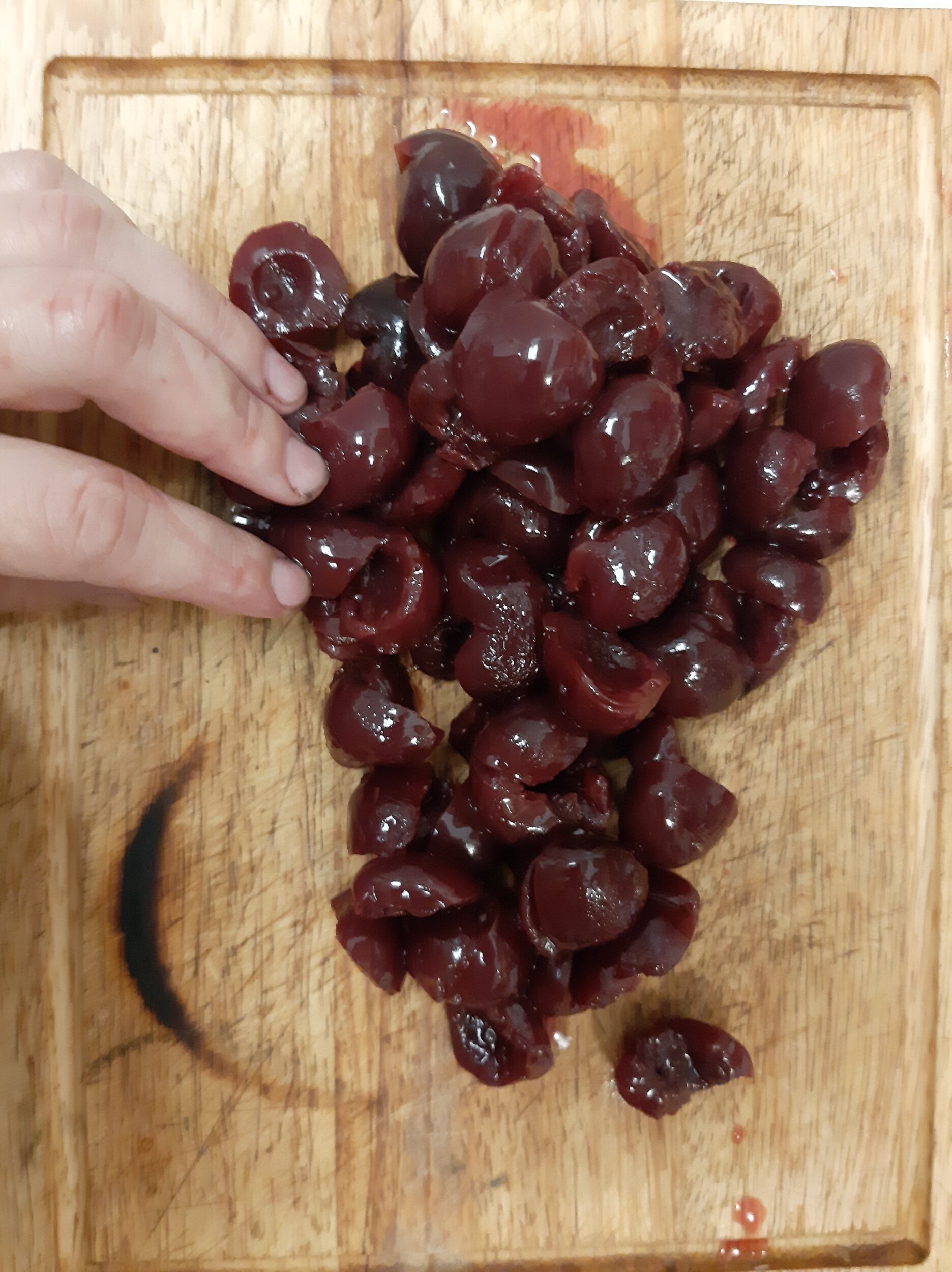 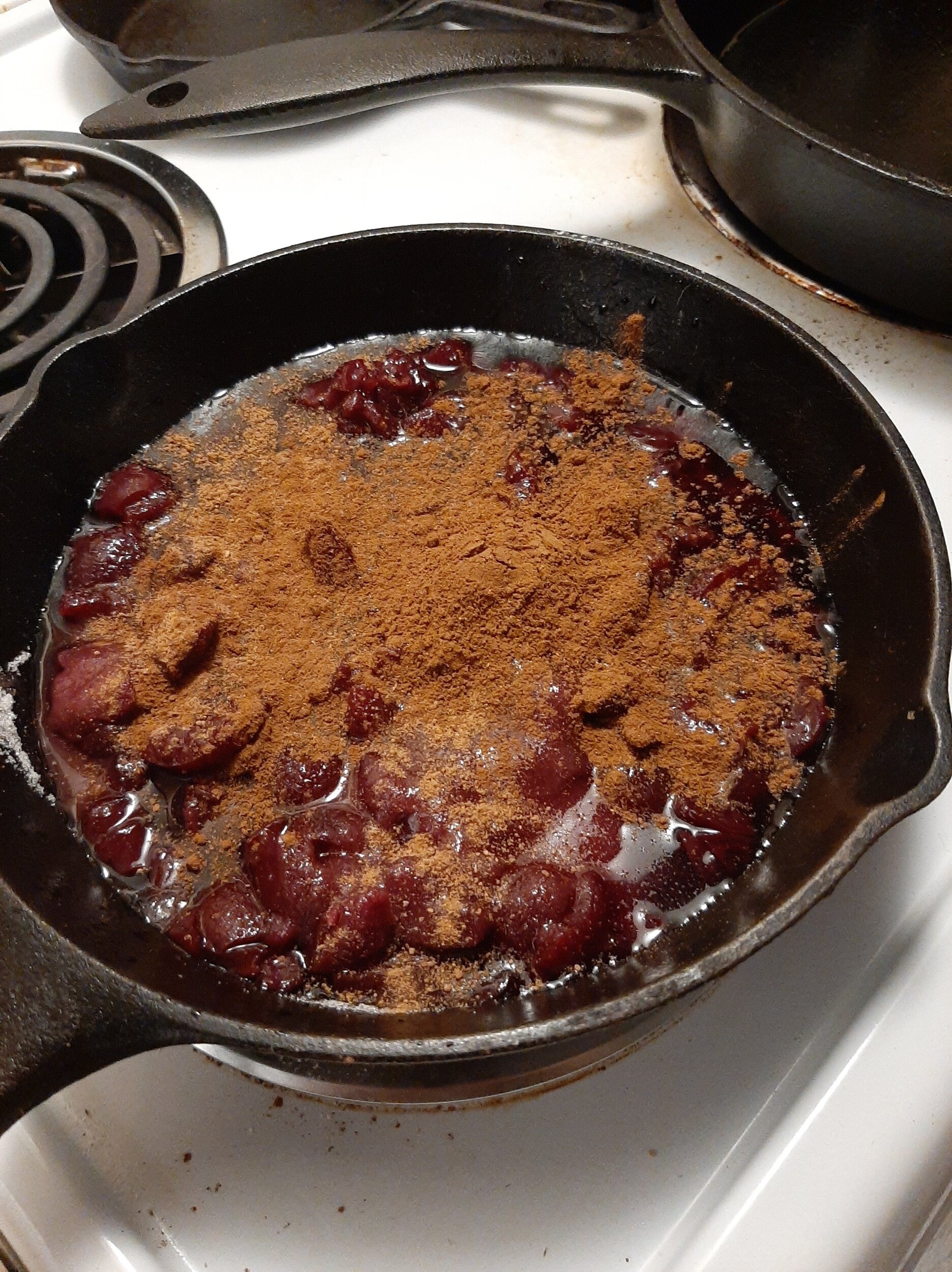 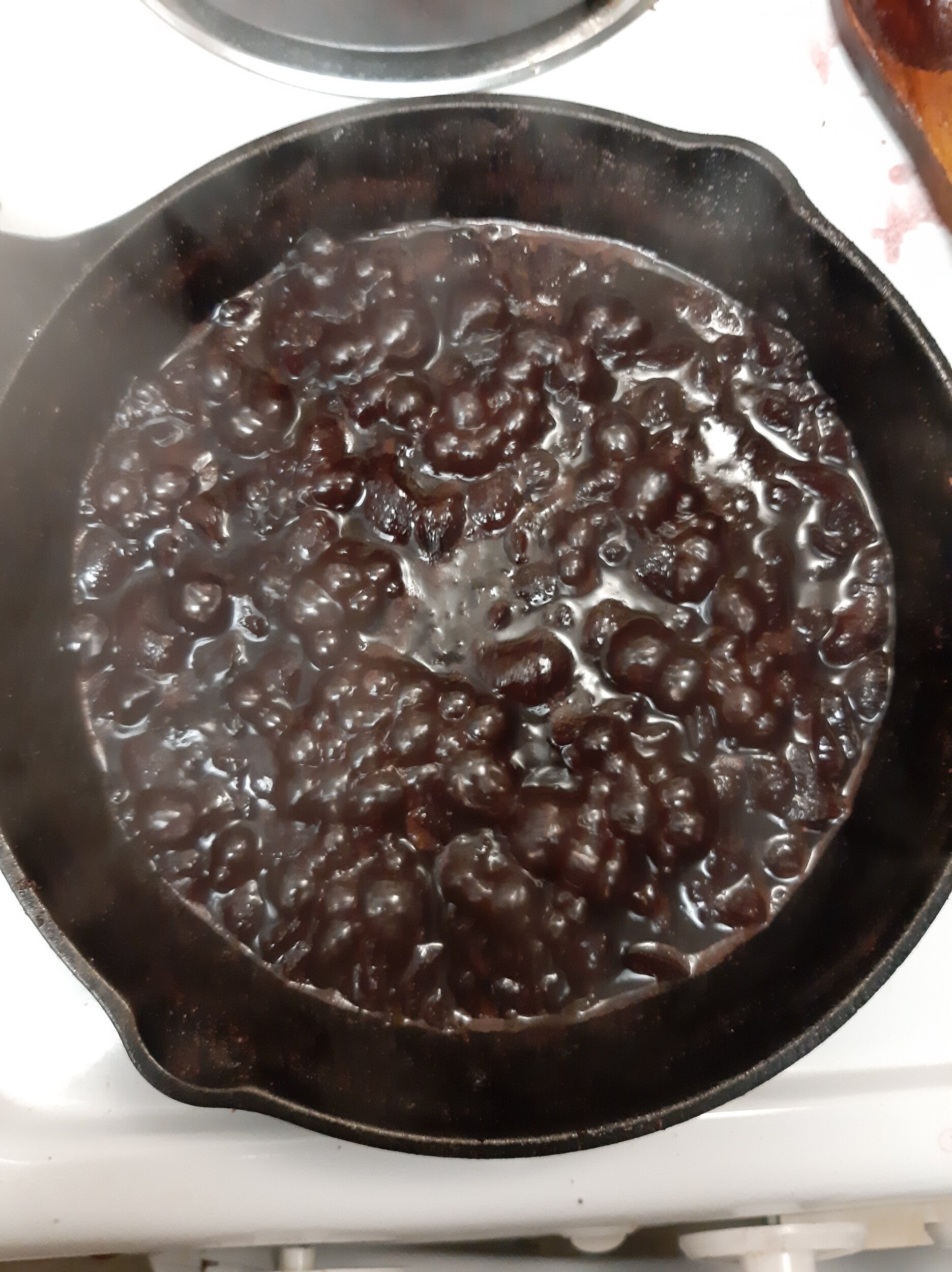 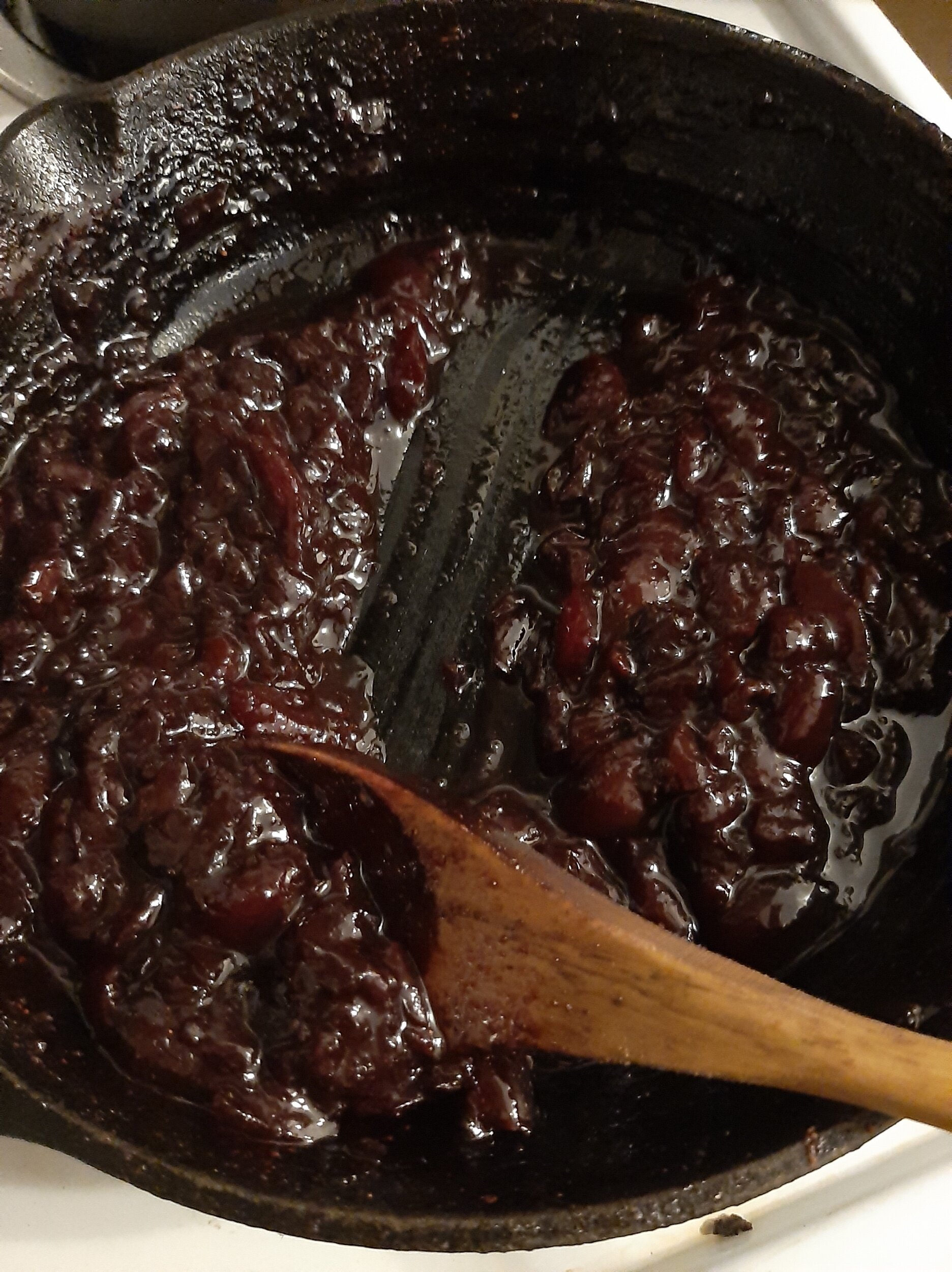 While my filling was reducing I made myself some little white chocolate bones and skulls. I used molding chocolate wafers to avoid having to temper it. I just melted my chocolate in a bowl over a pot with boiling water, then put it in a piping bag. On a piece of parchment paper I piped out my bones and skulls. For the skulls I would put down one layer of chocolate, then place it in the freezer for a moment to set and then apply the next layer. After they were all done and set, I gently brushed some cocoa powder over them with a paintbrush to bring out the details. I set them aside away from the stove once they were done to prevent them from melting while they waited.

After all my doughnuts were fried I dipped them in the glaze, I glazed them all before putting in the filling which worked but, I probably should have put the filling in first.

For the filling I used a skewer to poke a hole in the side of my doughnut, wiggling it around to make space inside for the filling. I took my filled piping bag and just squeezed it in.

After my glazes set a bit, but not completely, I put on my bone decorations and left them to dry. A while layer my toddler came out of the kitchen covered in chocolate and announced to me that he had been picking the bones off the doughnuts, he was very pleased with himself.

Making doughnuts is always messy work and chocolate glazed ones are even worse. These turned out pretty rustic but there is nothing wrong with something looking homemade. 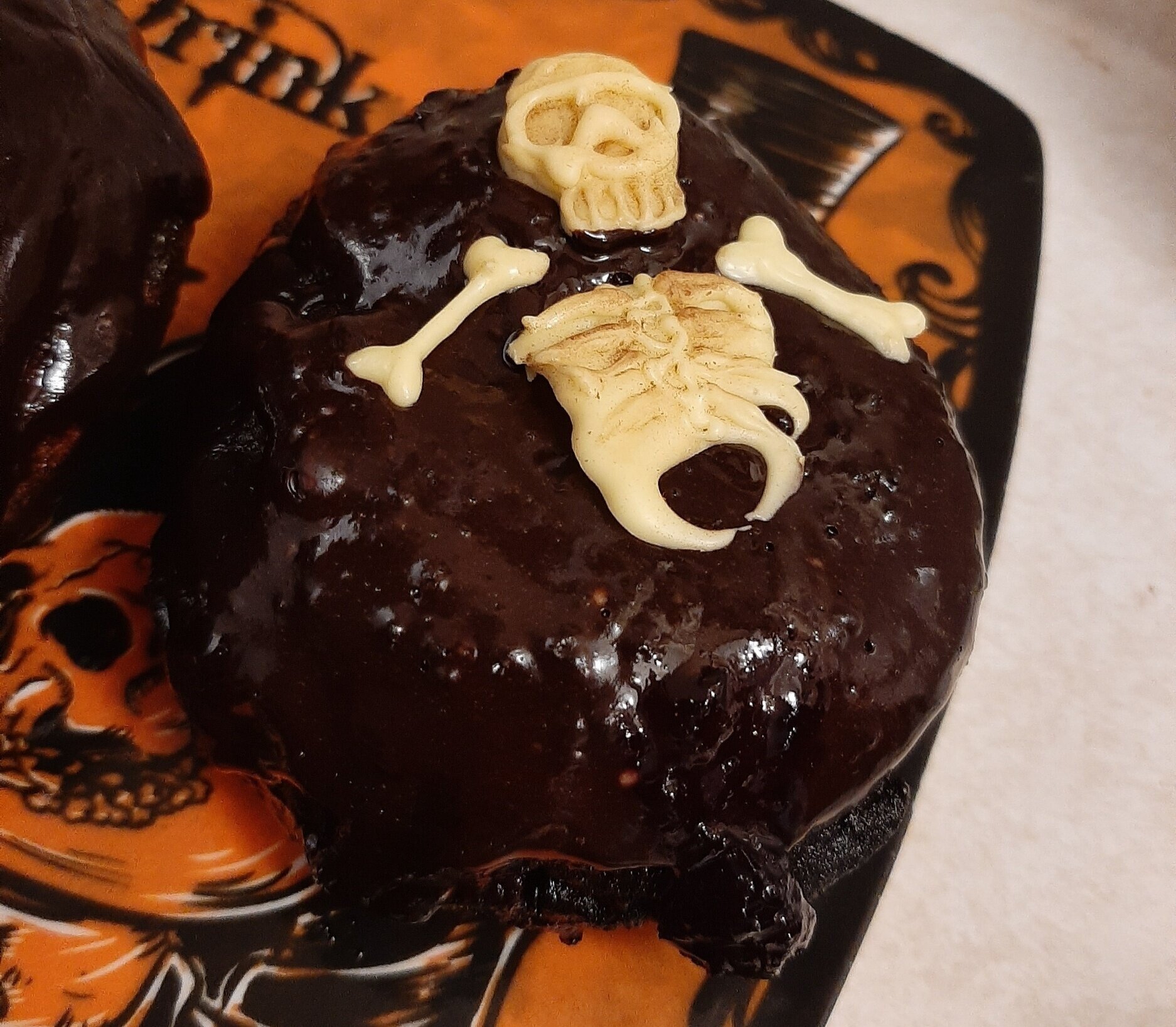 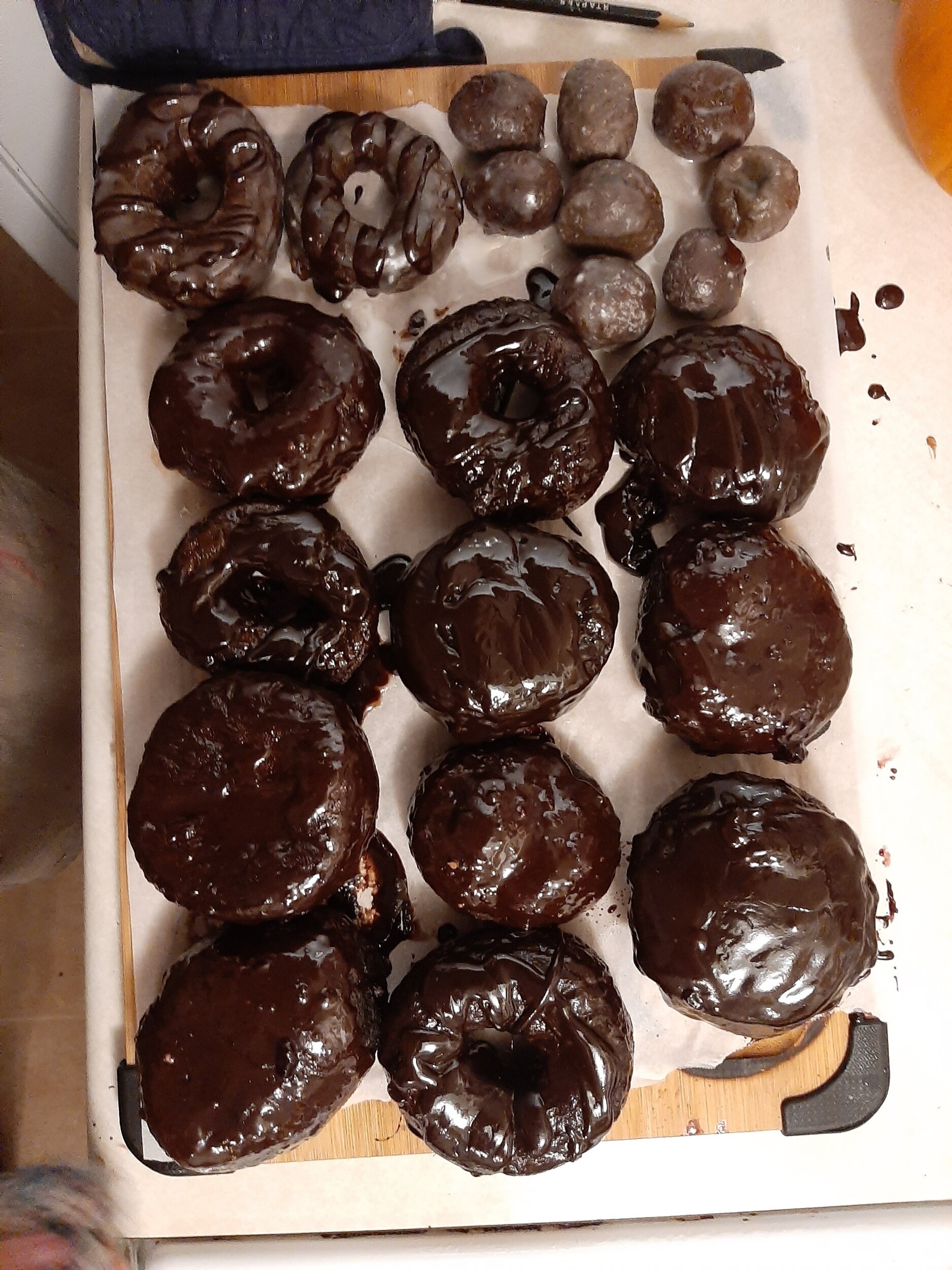 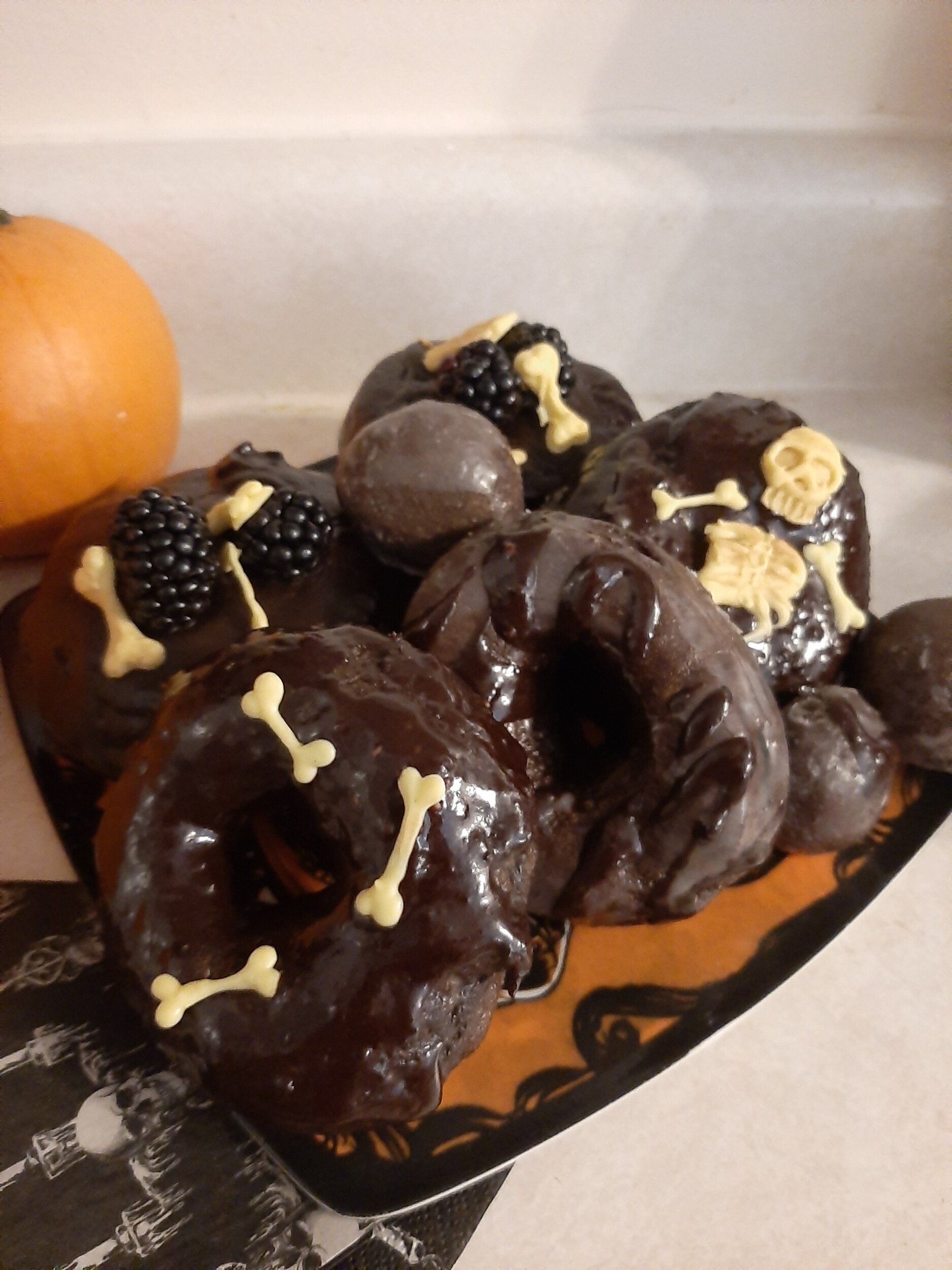 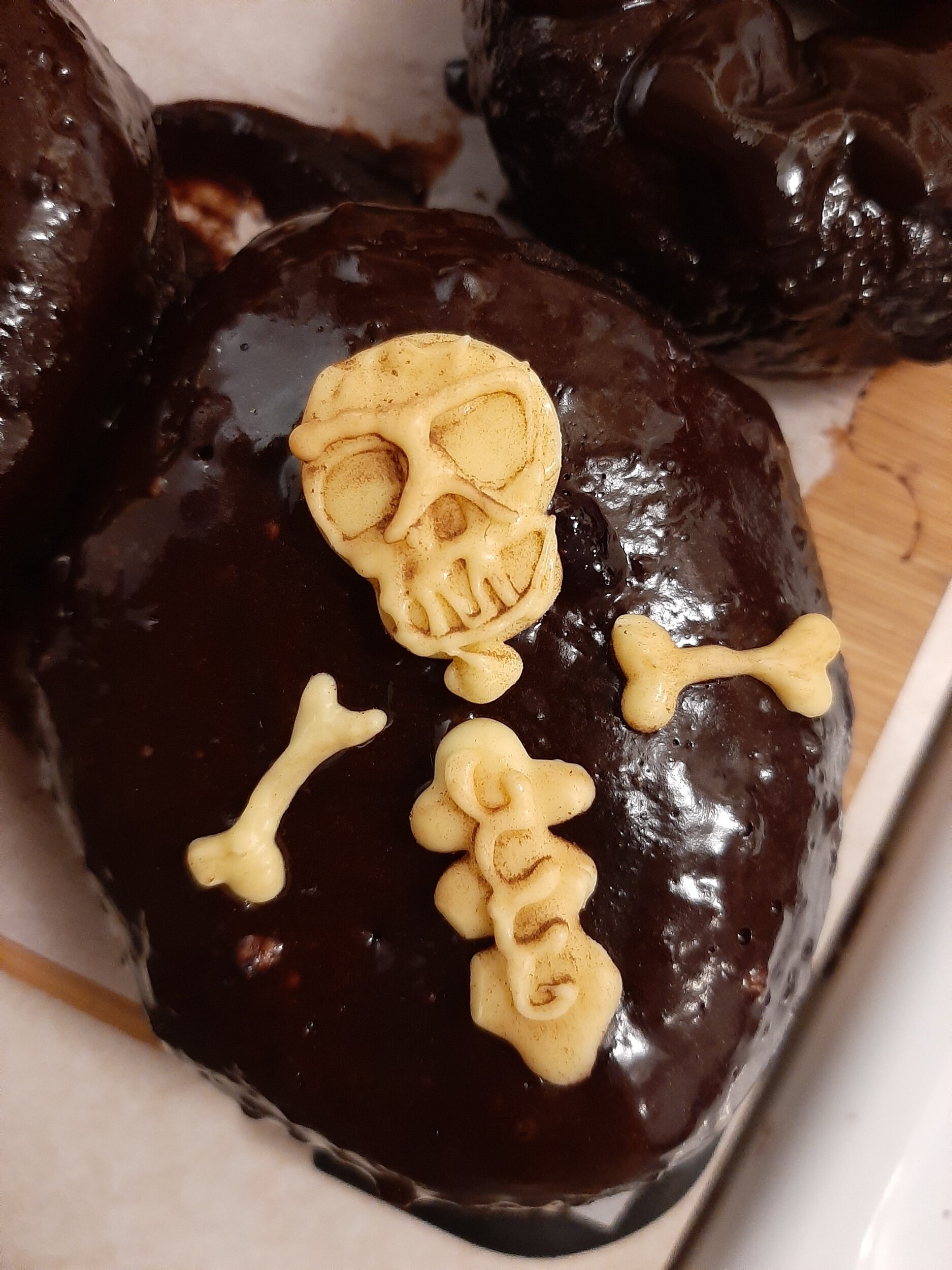 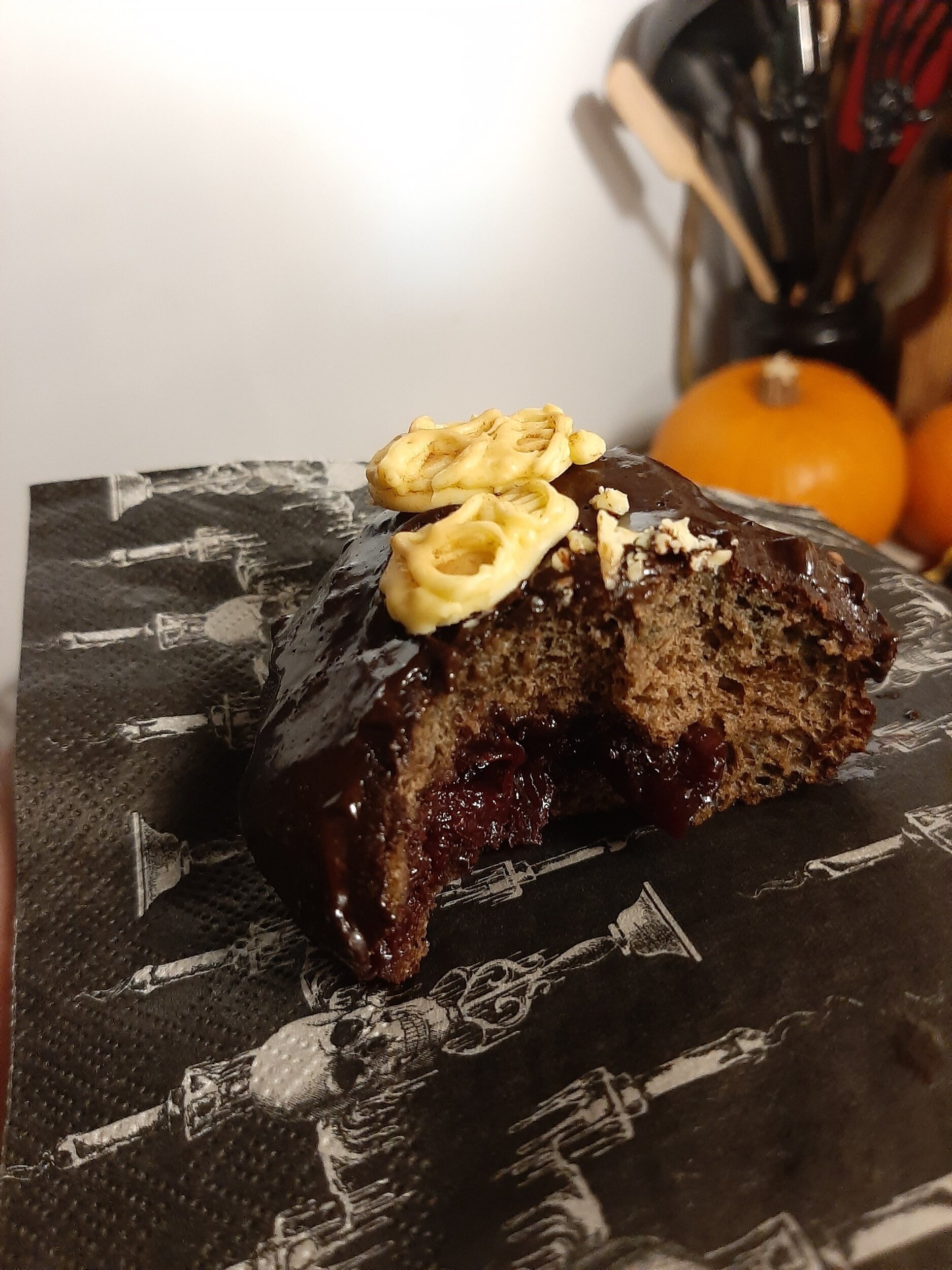 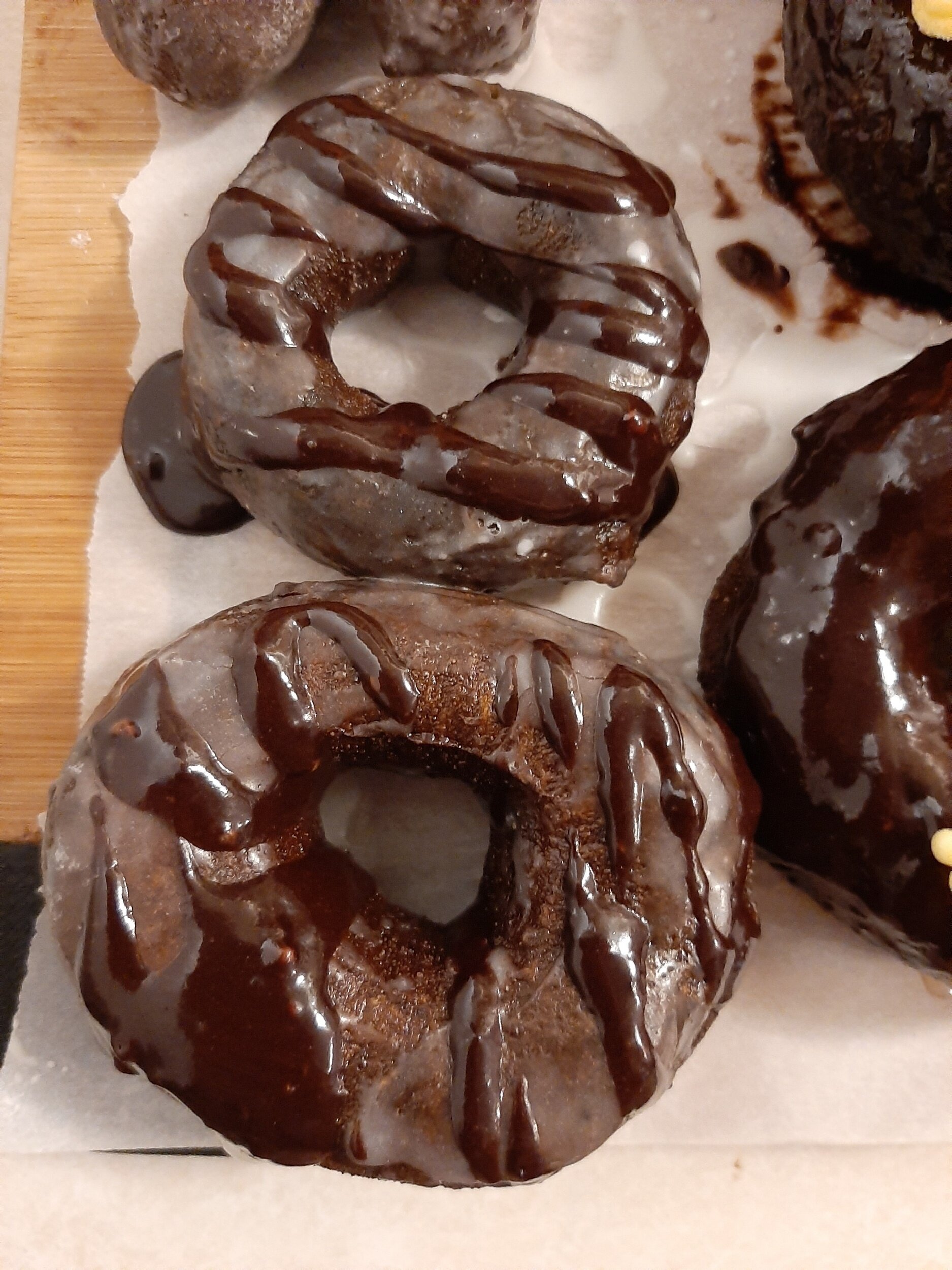 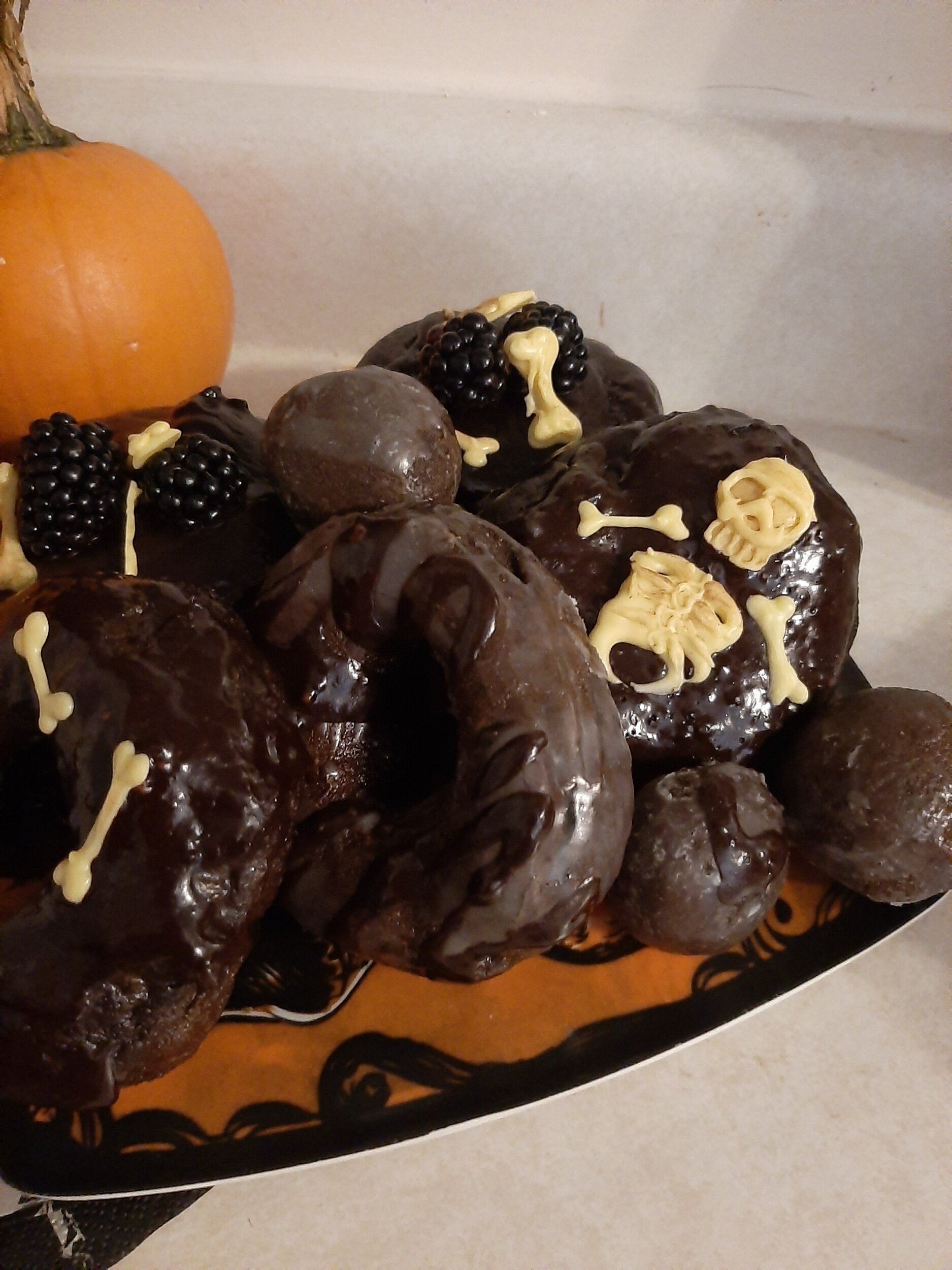