Here is a craft with deep history in several parts of the world. Something that feels magical and sacred. You see, here in North America we have a kind of mixing of histories and the corn husk doll is a traditional craft of eastern native Americans. It’s also a traditional craft from several parts of Europe, celebrating the harvest season. The word corn used to just describe grains in general, so these ones would be made from whichever grains were growing. These days though, corn dolls are almost always made with maize husks. They are part of many pagan harvest rituals and celebrations and have become an art form on its own.

I could happily write a whole paper on this rich history. The symbolism of corn in itself is a deep well that’s hard not to dive into, but this isn’t the place.

This post is about slowing down, taking a moment to take a breath and find some calm.

Halloween, or Samhain is the last of the harvest Sabbats. Most of the food grown over the summer and into fall has been gathered and the ground is being prepared for winter. The grains have been harvested and are hanging to dry for use throughout the year. These are things most of us don’t see anymore but they still happen and are still important.

Most years I try and make a corn husk doll closer to the start of the harvest season but this year it didn’t happen, but there is still time.

What better way to welcome the end of this cycle than with a lovely little corn husk witch to join me in the kitchen.

In order to make the corn husks pliable, and not so brittle, they need to soak for a bit. Earlier in the day I got mine soaking in the sink. I also had a dye pot on the stove from my last project, so I put a few husks in there too.

This is a great project to do with kids but mine are still too young so, I waited until after they were asleep.

I cleared off the table, turned off the TV, laid out all my equipment and lit a few candles. The stress of being behind on this whole 31 Days of Halloween endeavor was getting to me. In the words of my husband “I need to find a way to enjoy it again” and, with a some guidance from Grandma, this project was the answer.

With everything laid out I made some Chai tea and let my hair down.

I took two good sized pieces of my husk to use as the main body, I took a third piece and wrapped it around the tops of them. While holding it all in place I folded the rest of the body pieces over the wrapped piece turning it upside down and secured it around with a thread. Unfortunately I didn’t get a very descriptive picture. 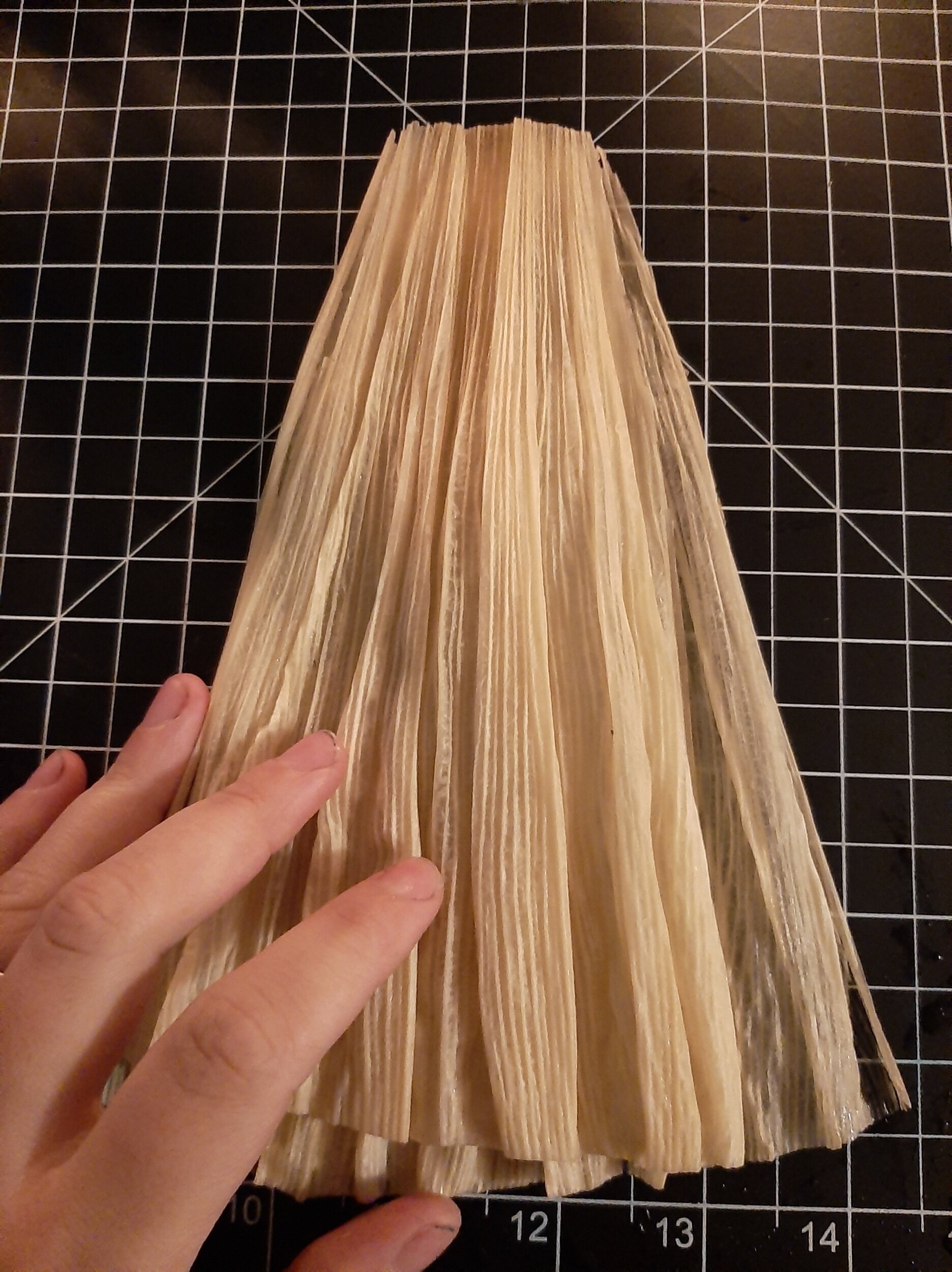 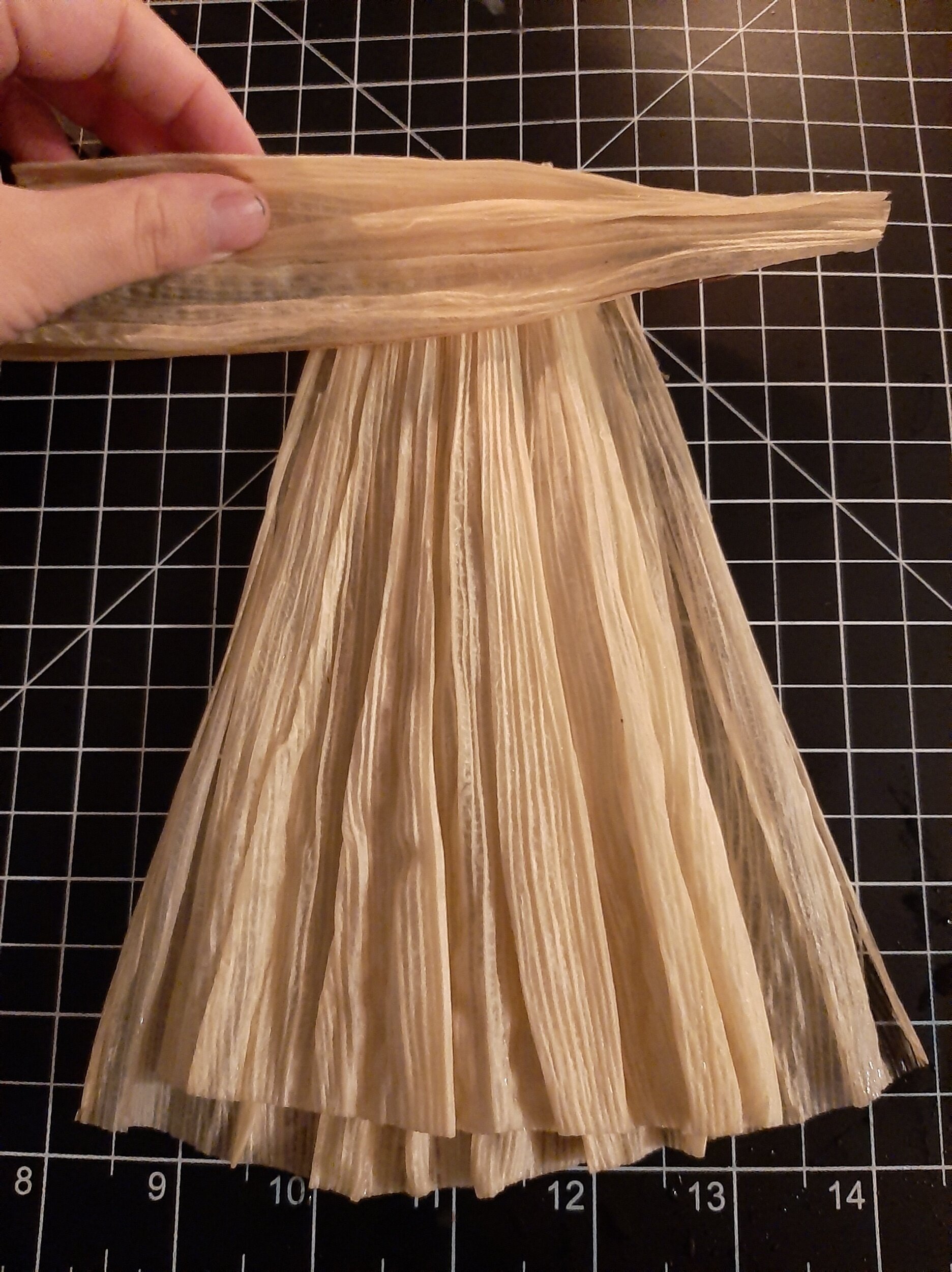 Piece to wrap around 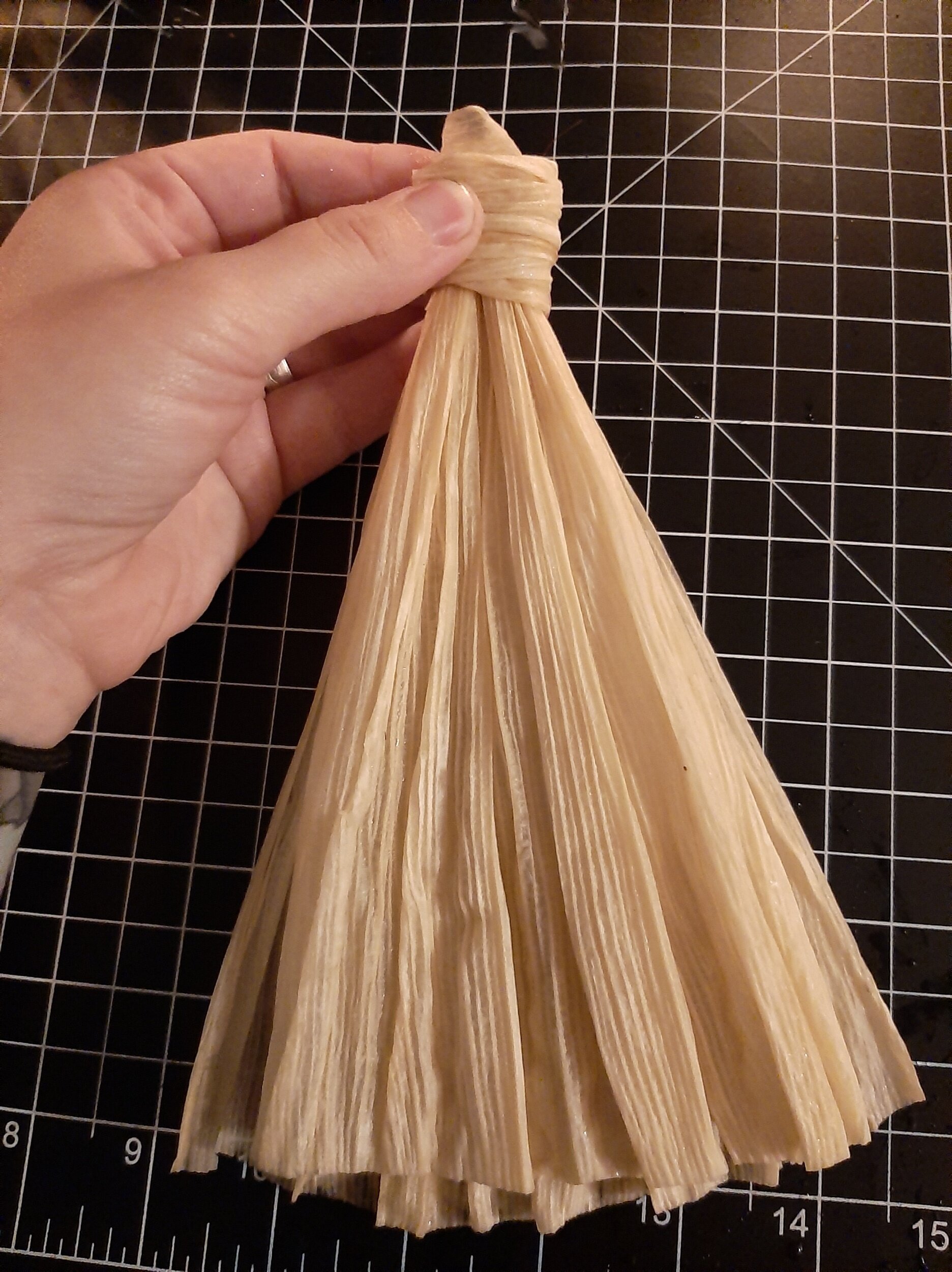 Wrapped all the way around 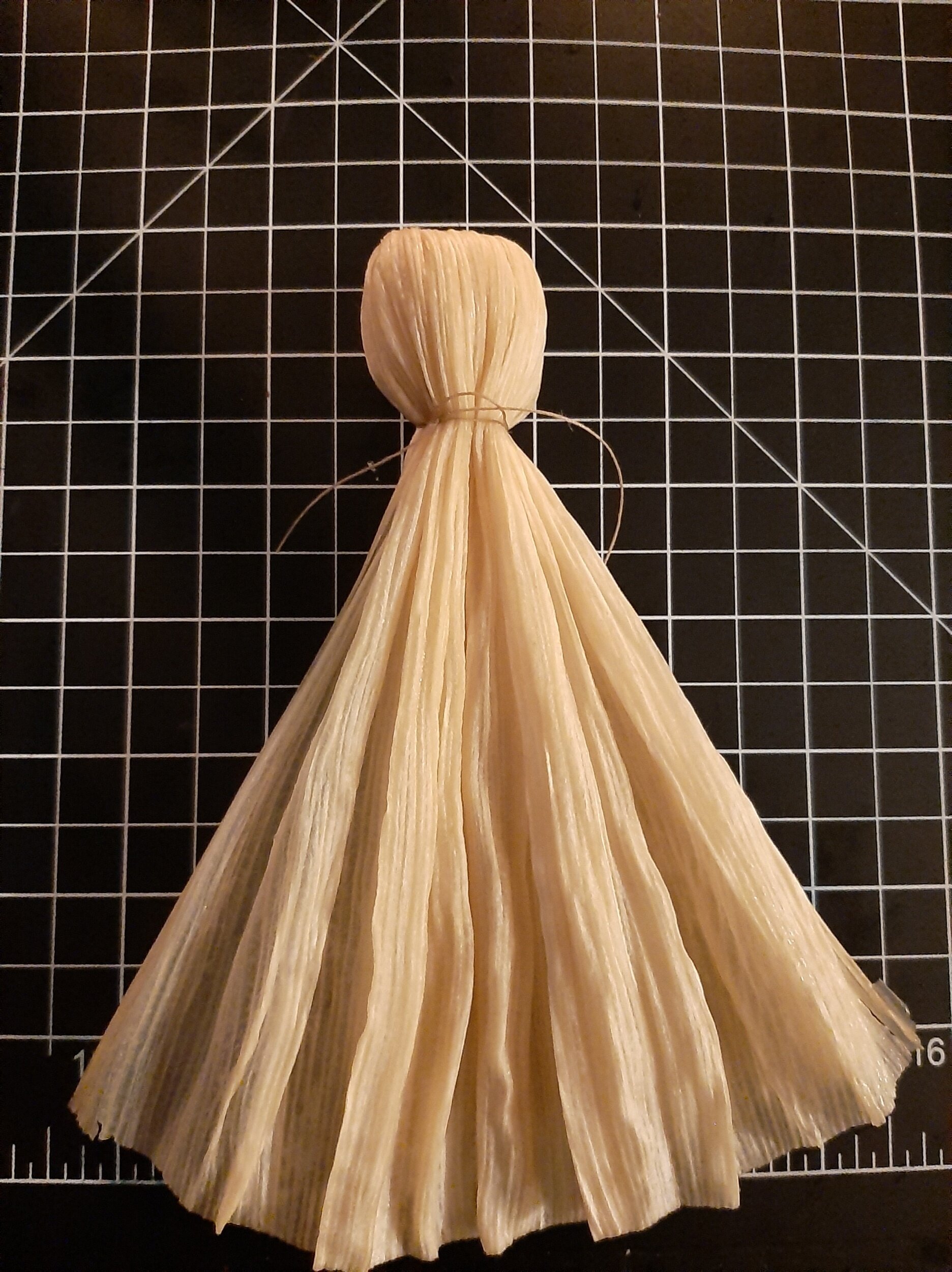 bottoms folded back over the wrapped piece then tied off.

Next I tore three long strips from a husk, tied them at one end and braided them, tying off the other end. Then I put this braided piece in between my two main pieces for the arms. 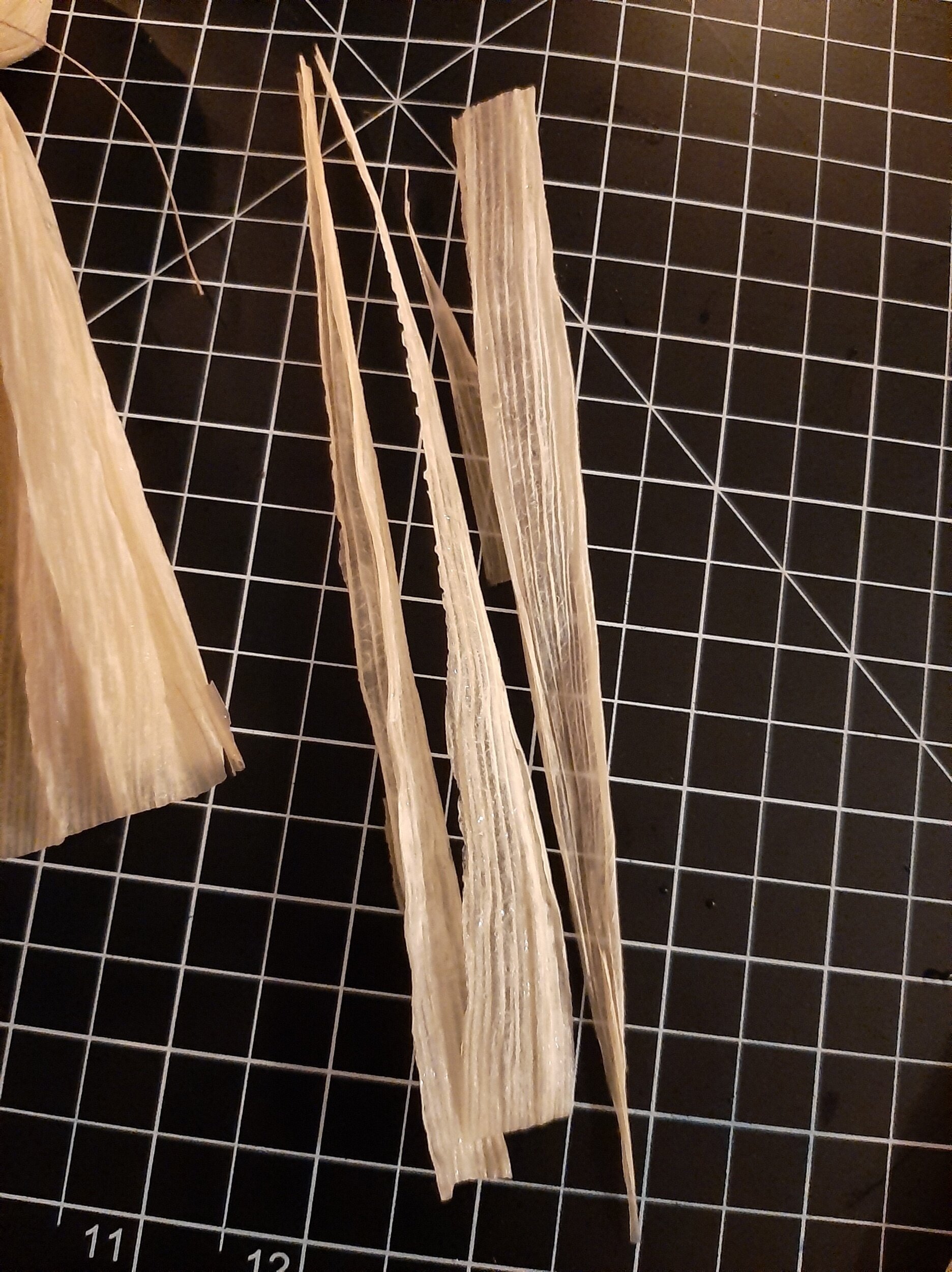 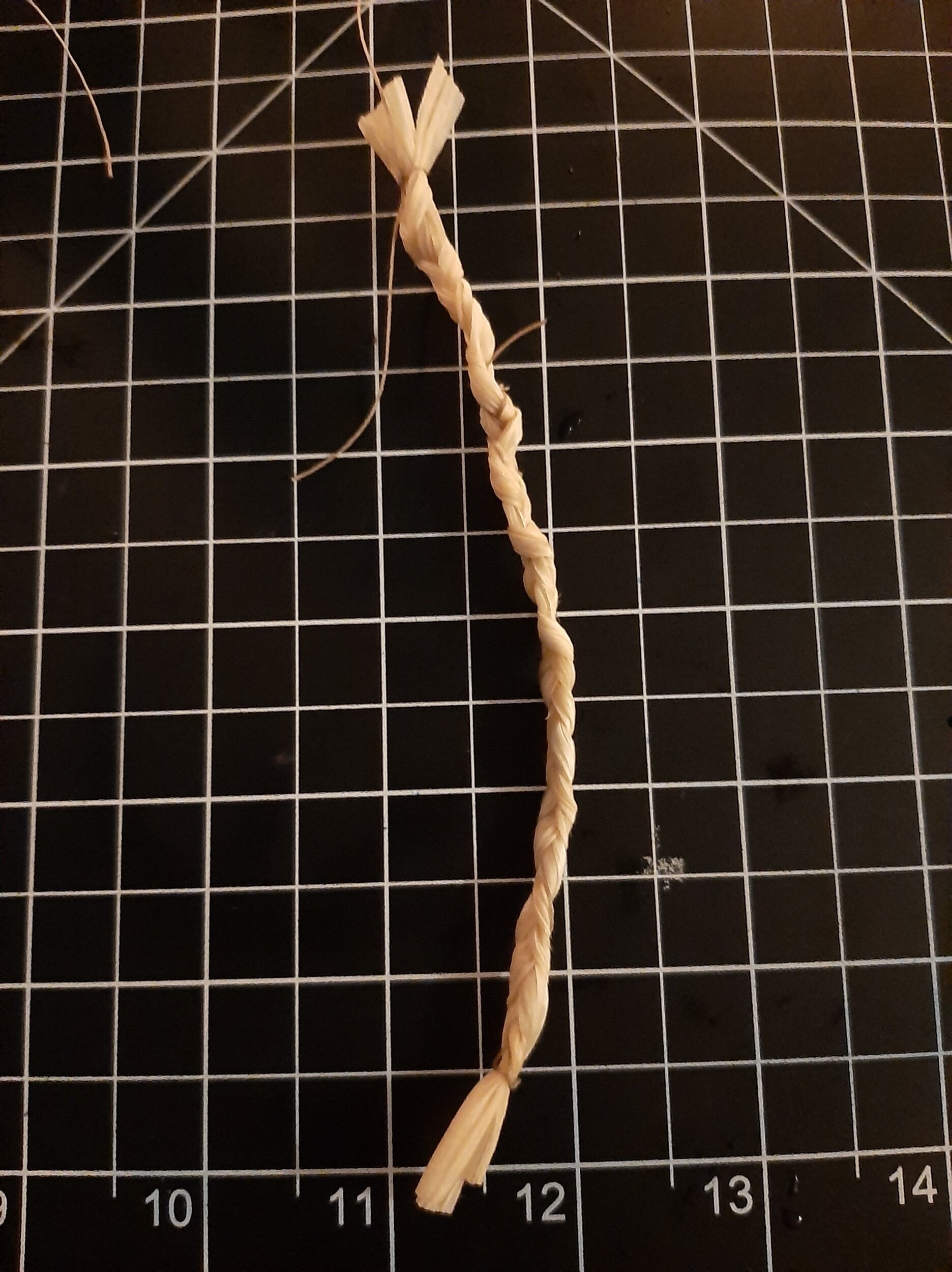 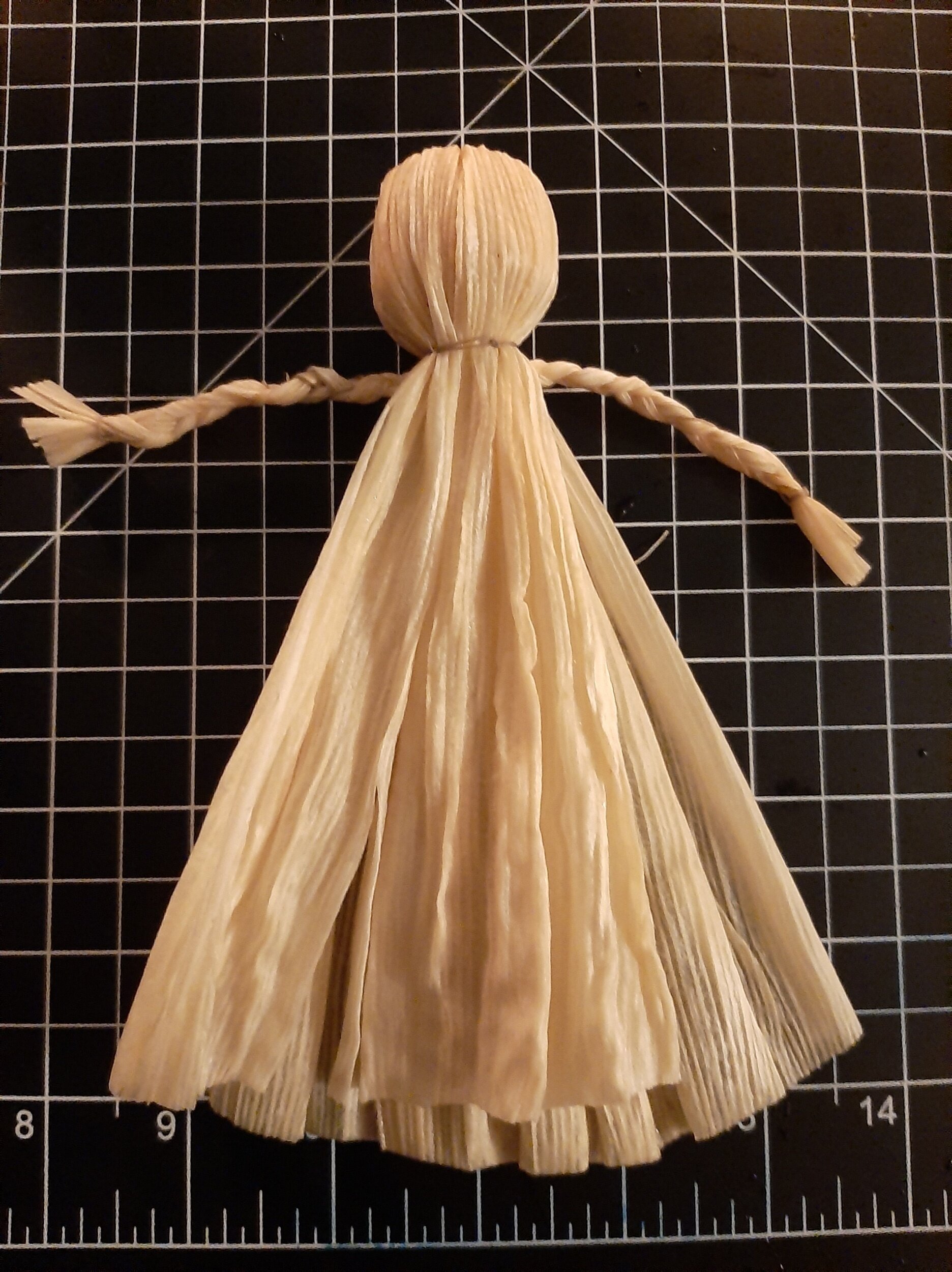 At this point you could tie off the waste and split the husks to make legs or leave it as a dress. I decided I wanted to give her a big dress.

I took my black corn husks and lined the tops of them up with the bottom of her existing dress, wrapping them all the way around her, then I tied around where I wanted her waist to be. I folded the husks down and straightened them out. To hold everything together, and help the husks dry in place, I tied some thread loosely around the skirt of the dress. I trimmed the bottoms so they were all the same length and now she can stand! 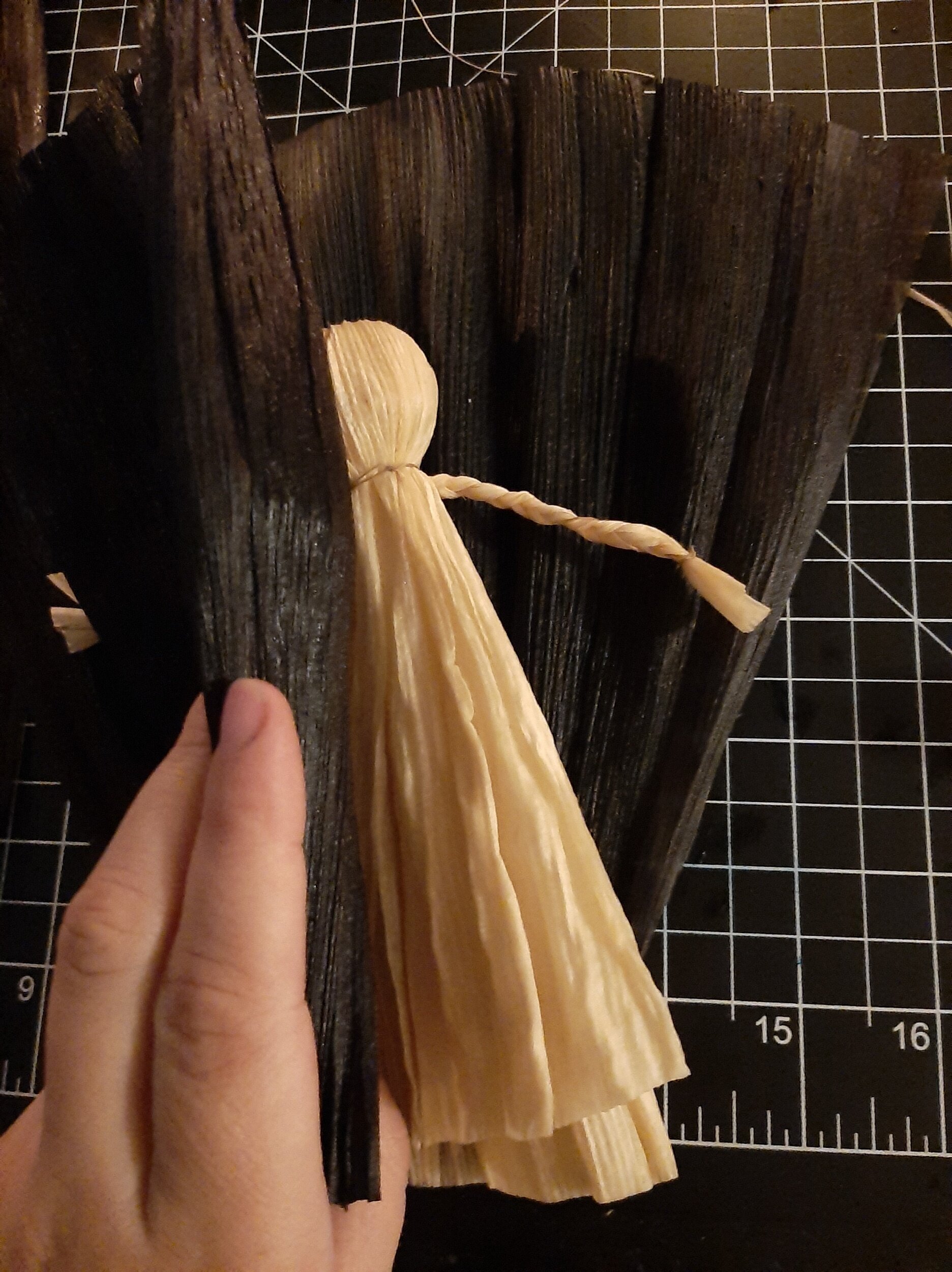 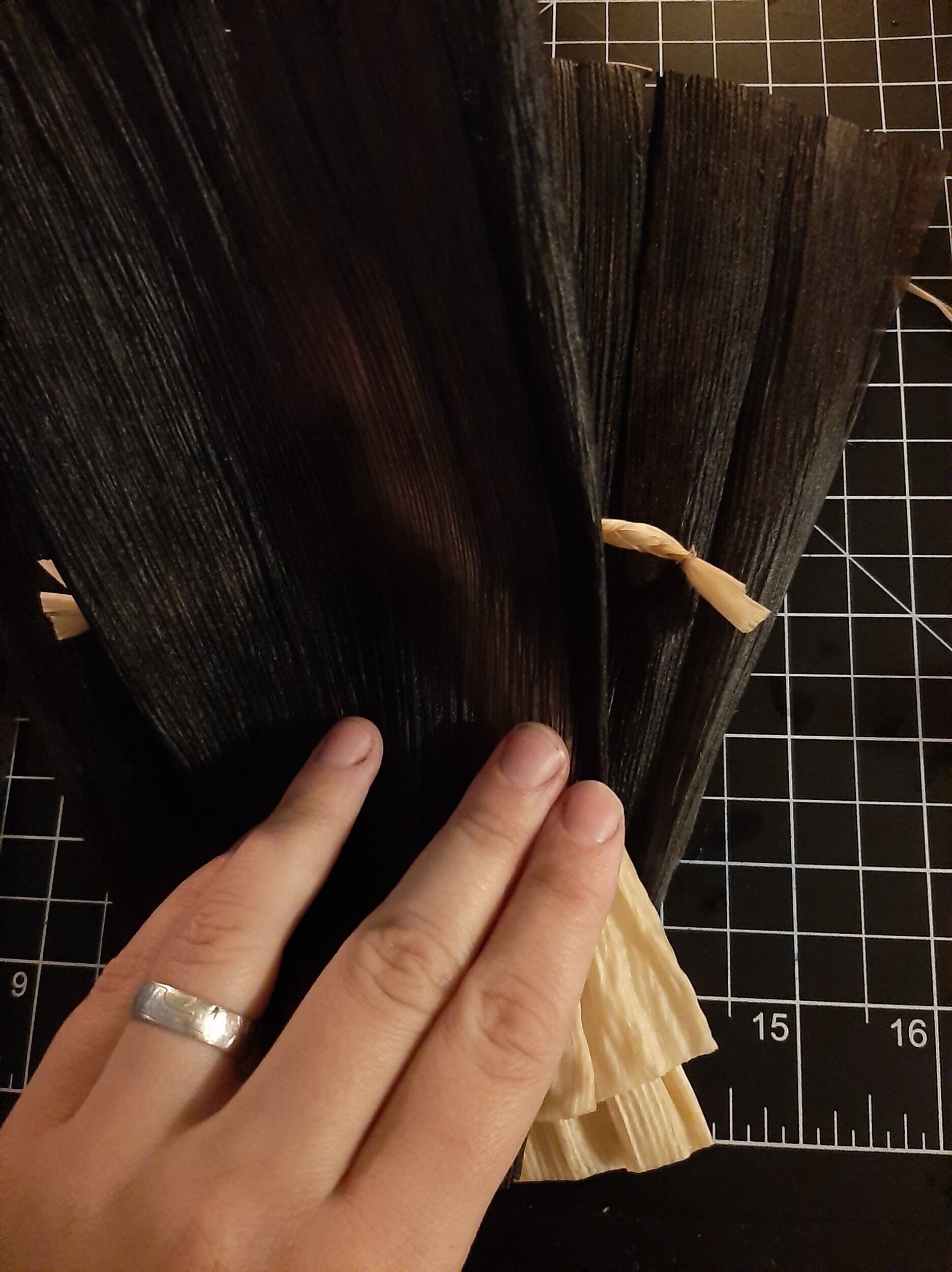 Making sure she was completely wrapped 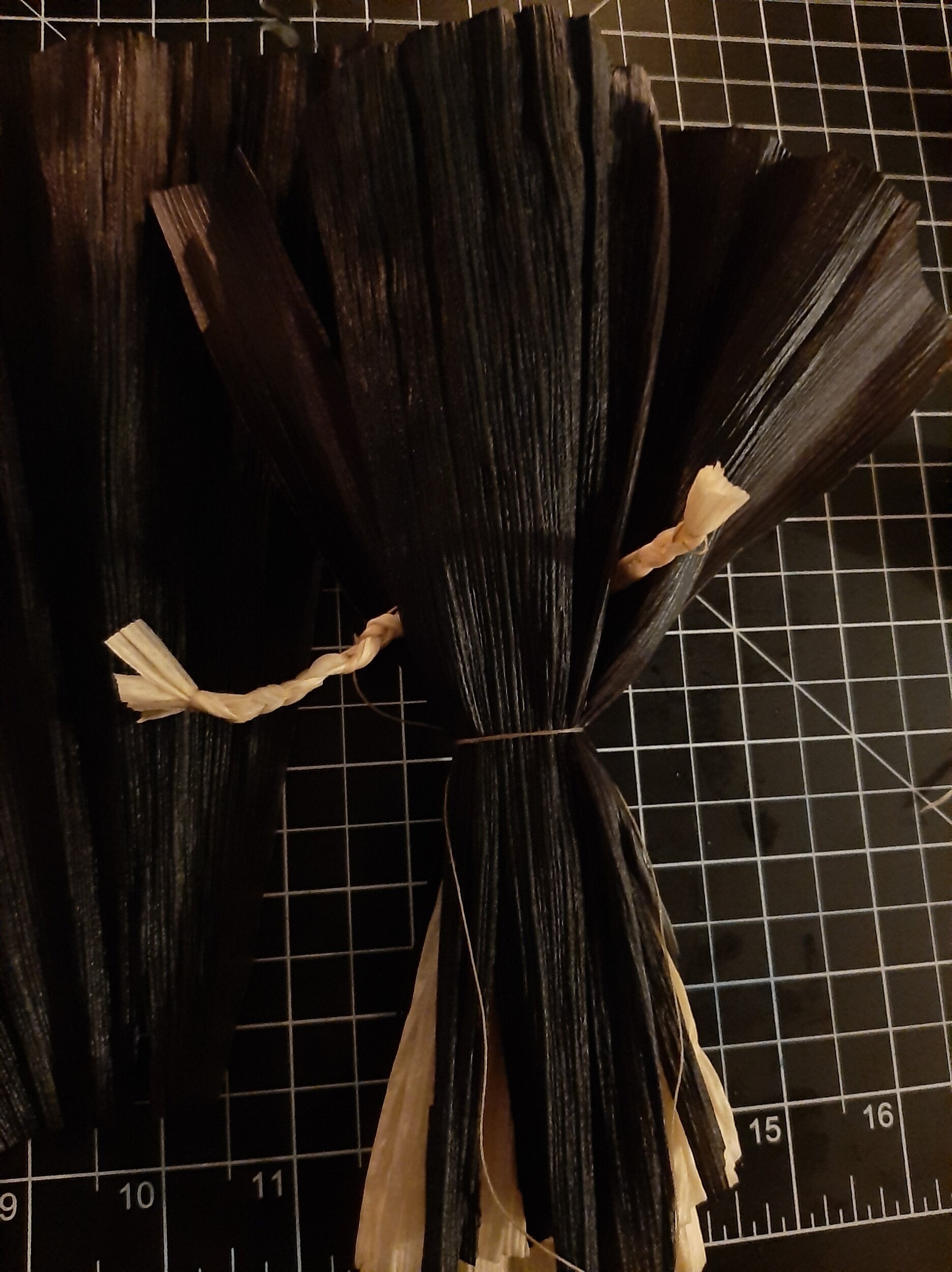 Tied at the waist 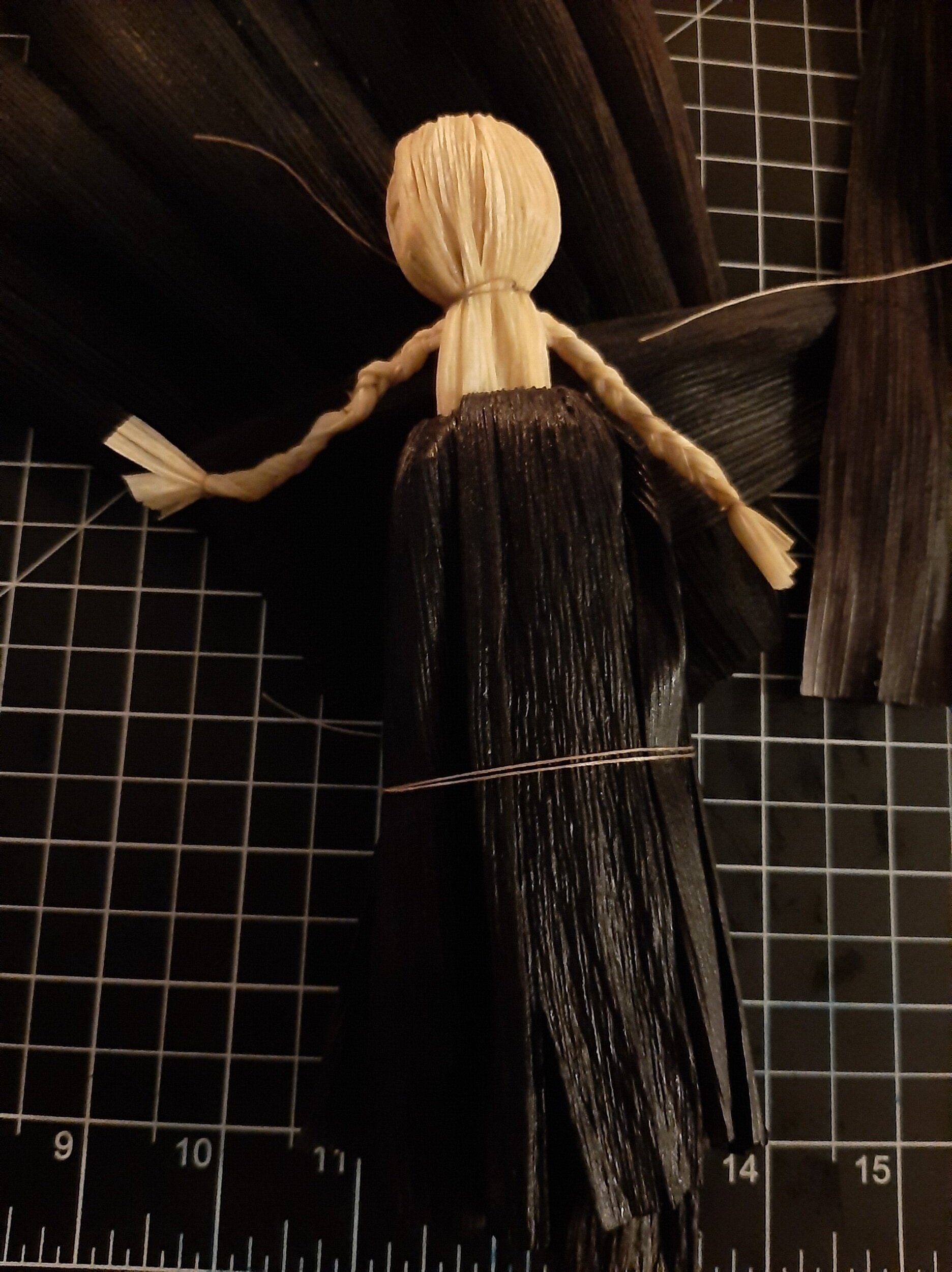 Folded down and tied in place 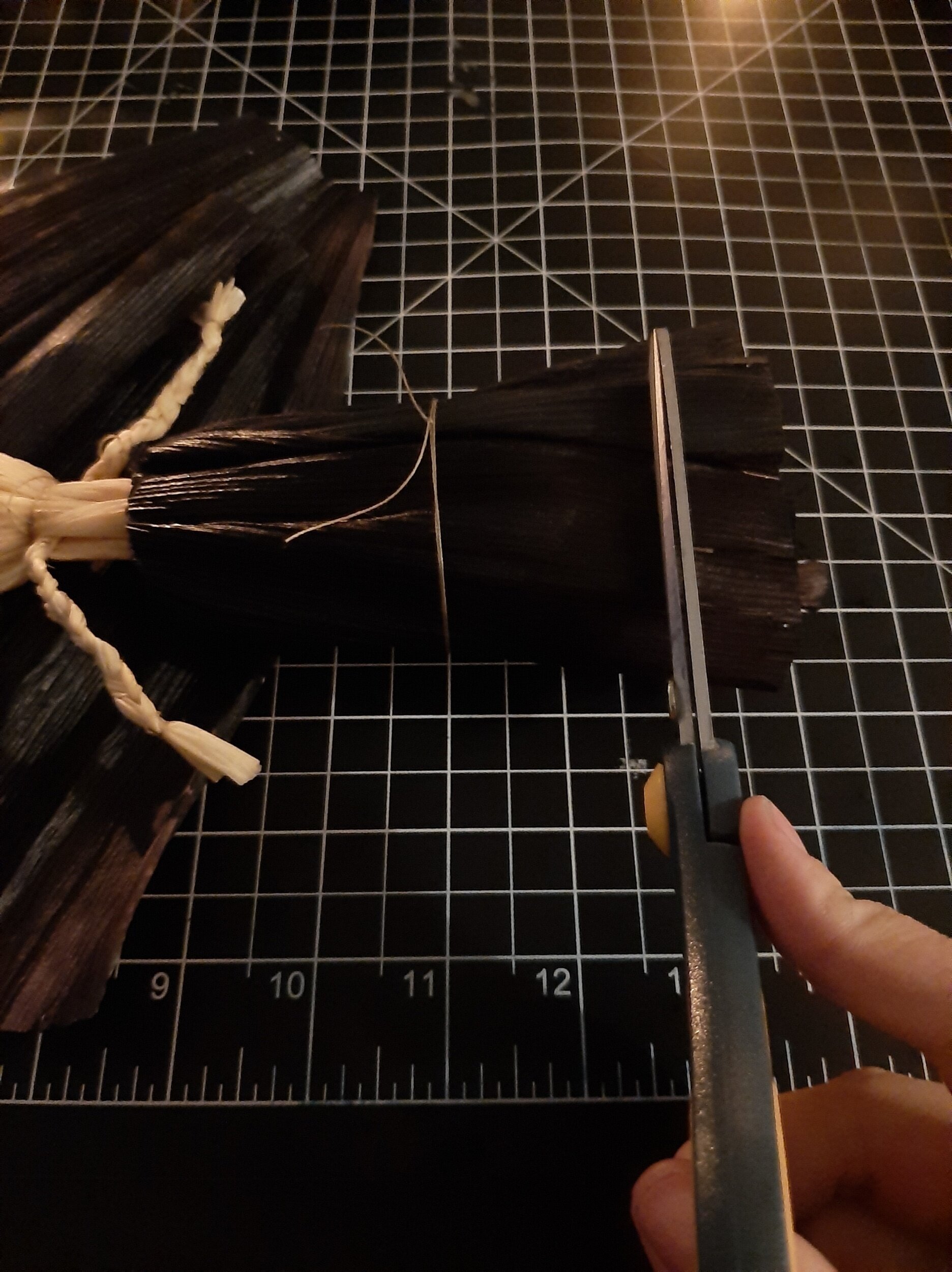 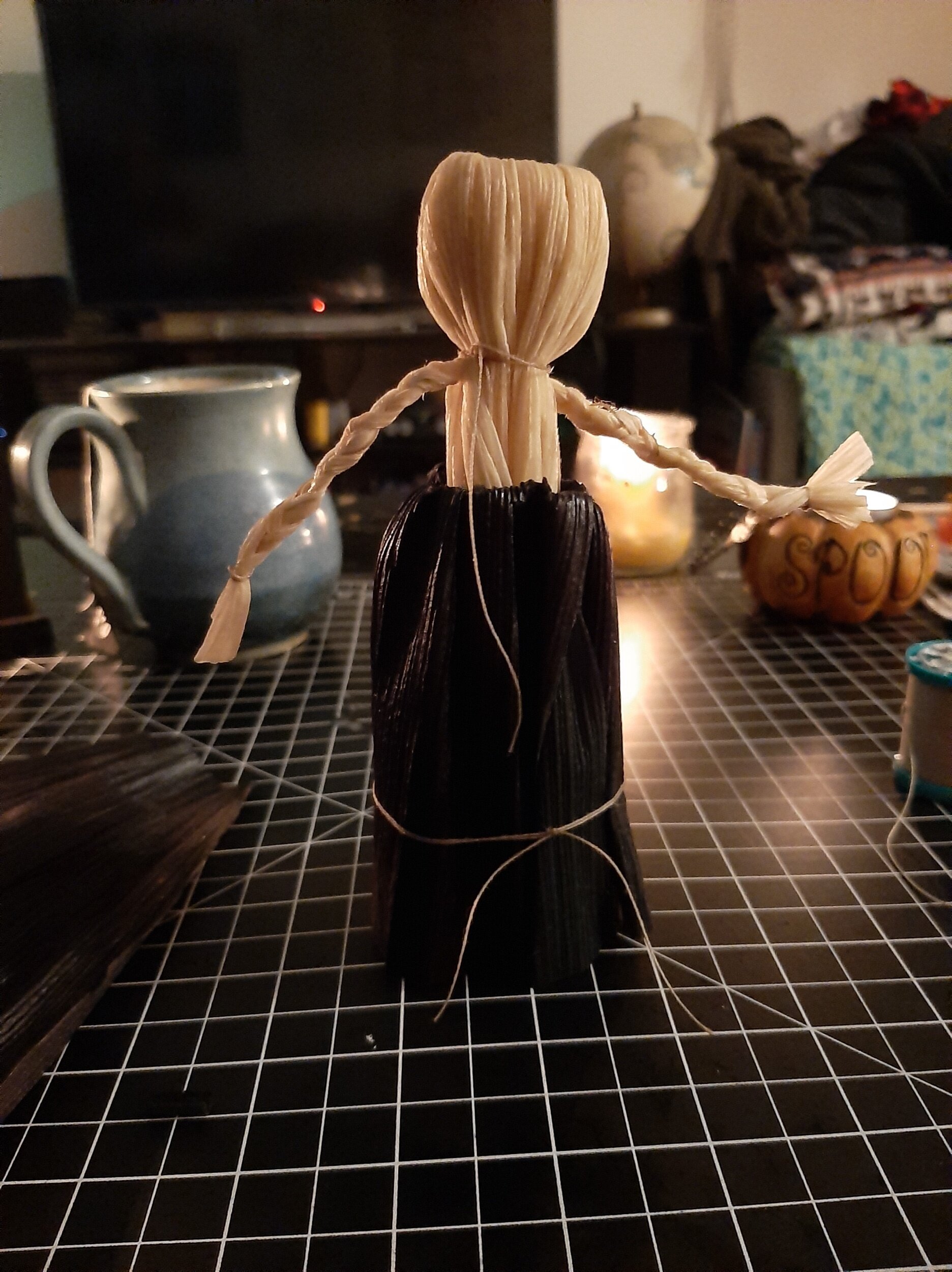 To make the top part of the dress I took two thin pieces of my black husks and crossed them over each other making an x at the back of my witch. Then I pulled them down over her shoulders, crossing them in the front as well. I played with the placement a bit here, for some reason it was important to me that her arms were not being held down. When the placement was good I took the back tail of the husks and wrapped them around her torso, then tucked it in to the tie from the skirt. I did this with both, leaving the front tails to hang in front. This was another part that was hard to photograph and would be better served with a video. 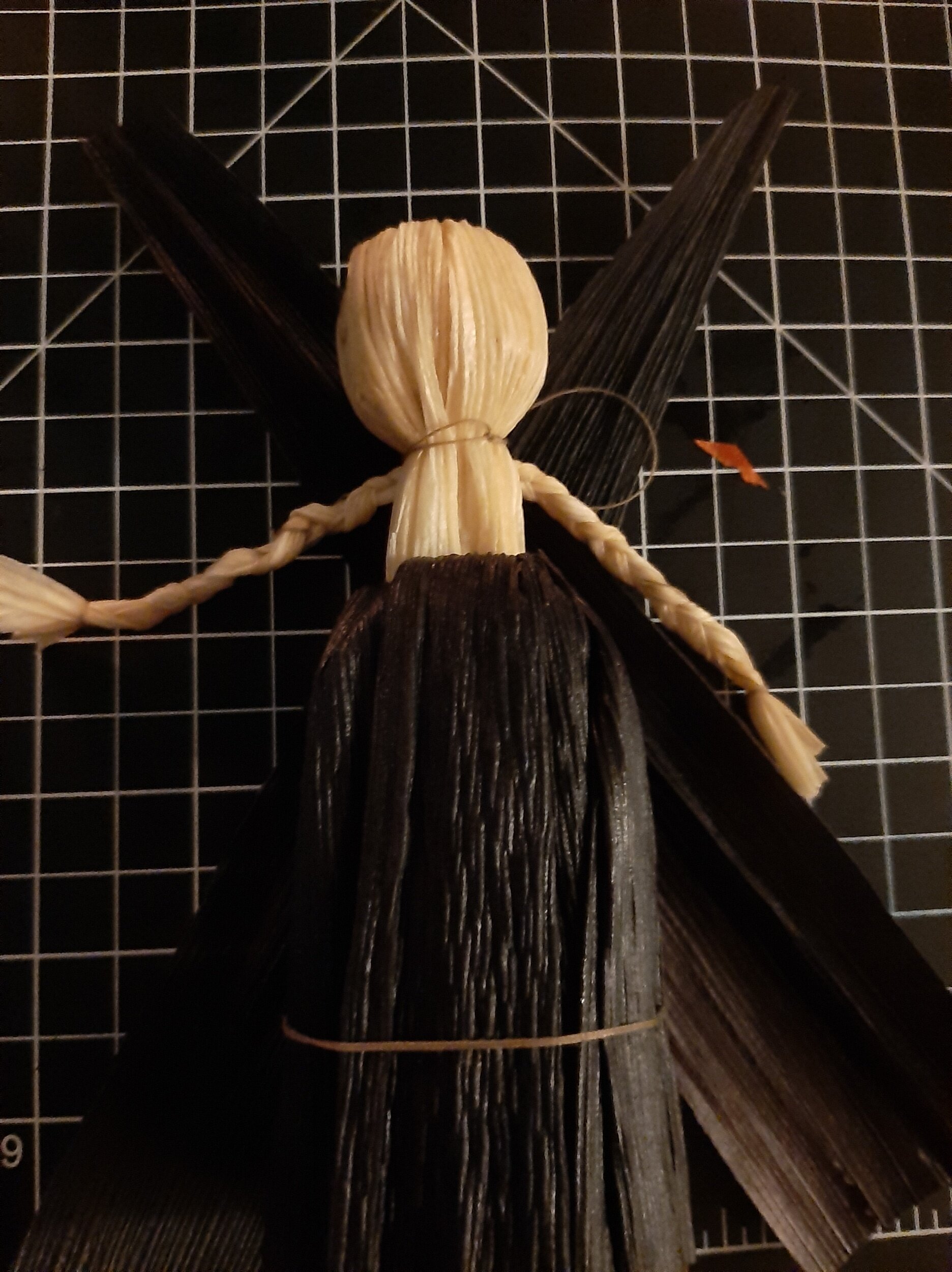 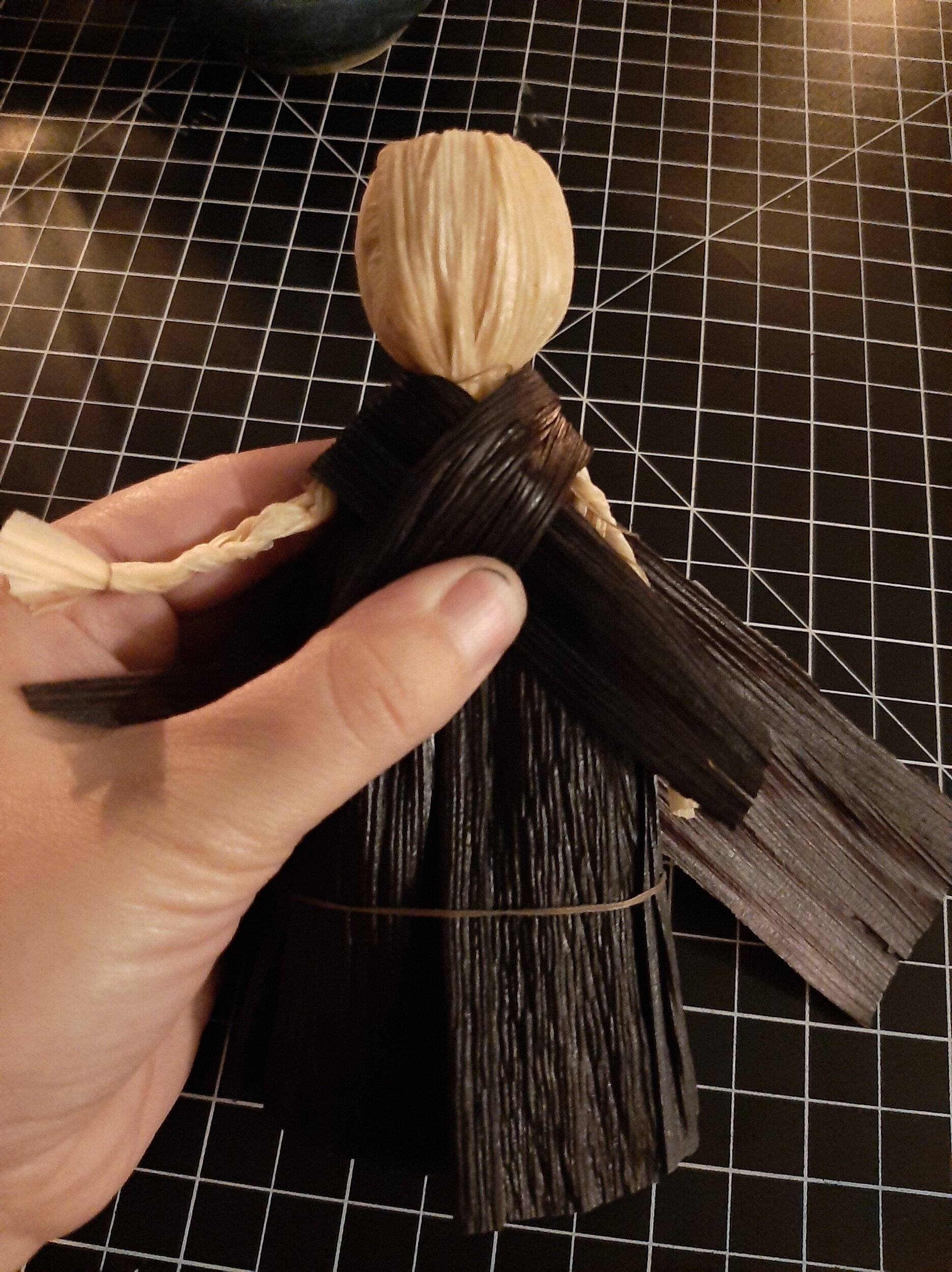 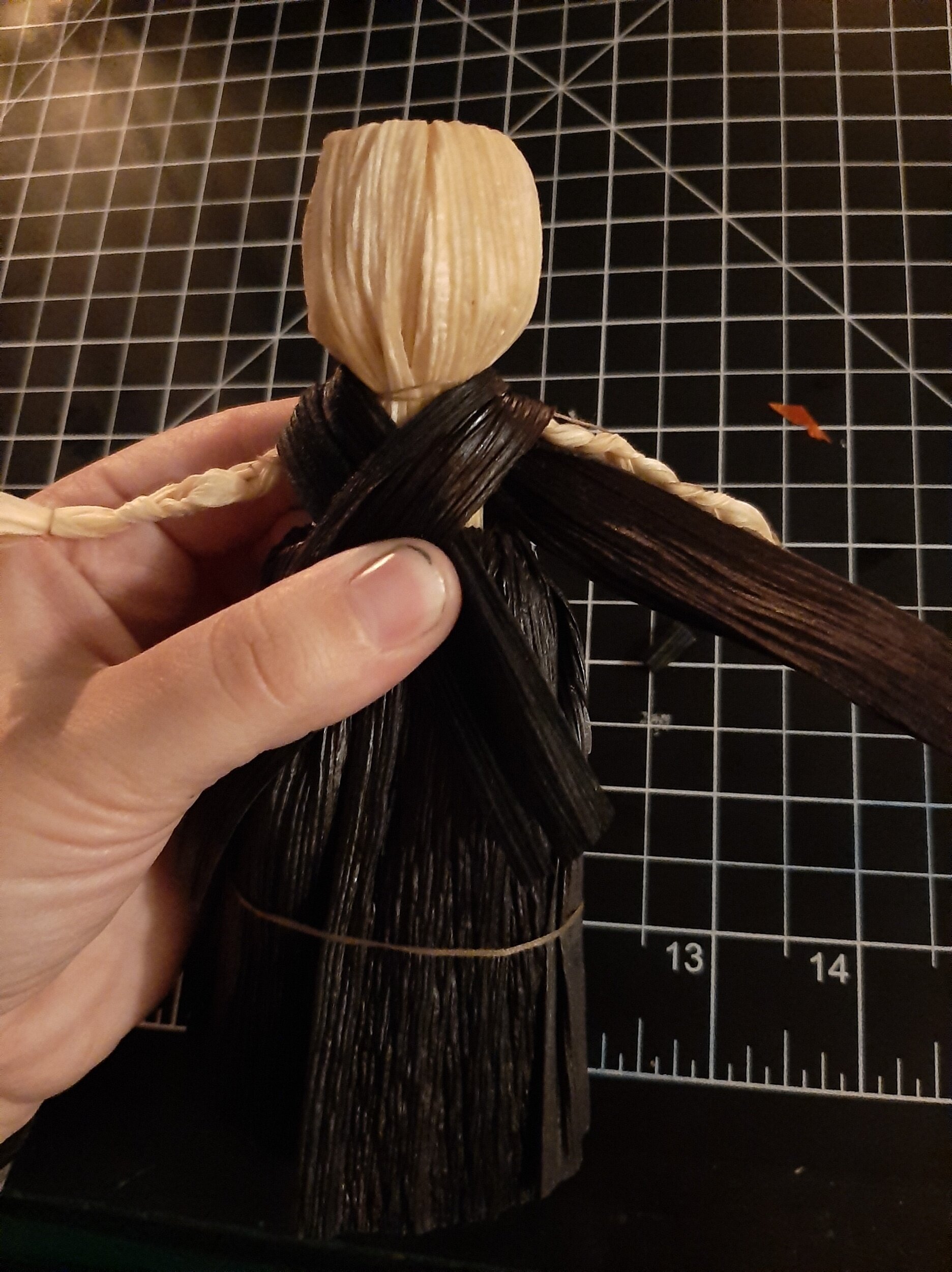 For the broom I used a thick skewer that I cut down to size. I tore up thin strips of undyed husk and lined them up with the bottom of the stick. I tied them tightly around the stick making sure they went all around it, then folded them back over the tie. I tied them tightly down on the top to hold everything down then gently around the body of it to help it dry in place. I folded my witches hand around the handle of the broom and tied it with a little thread. 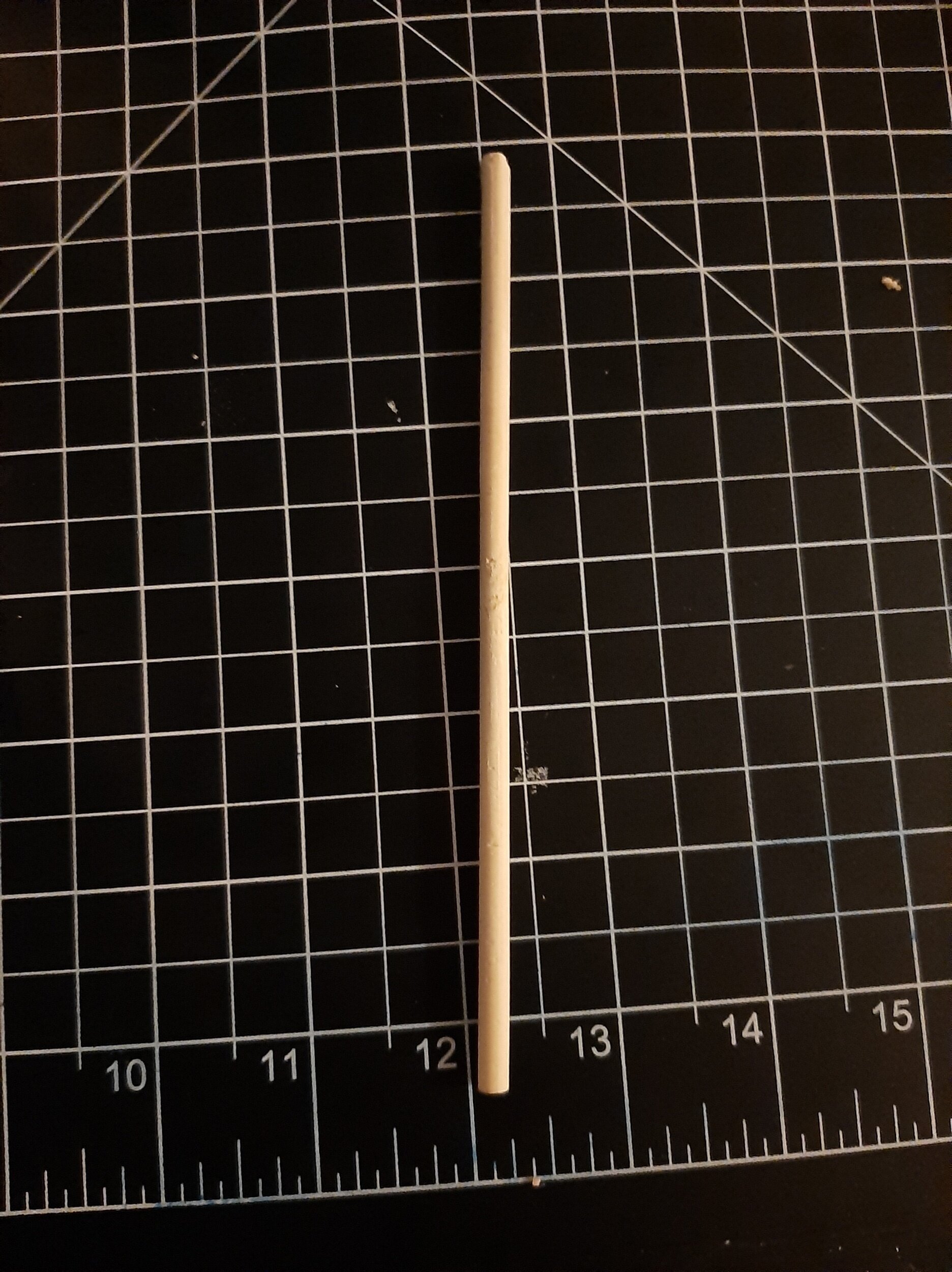 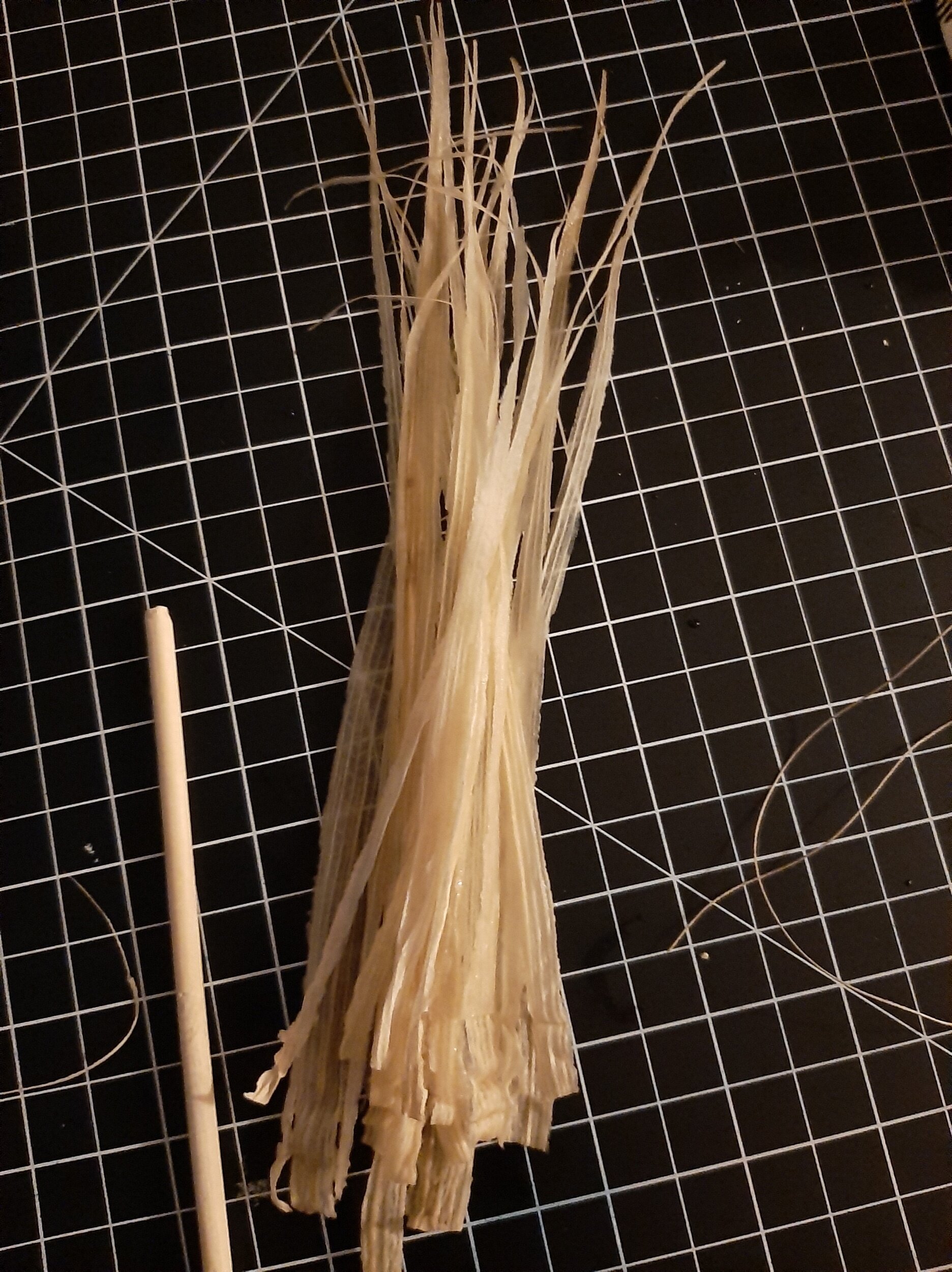 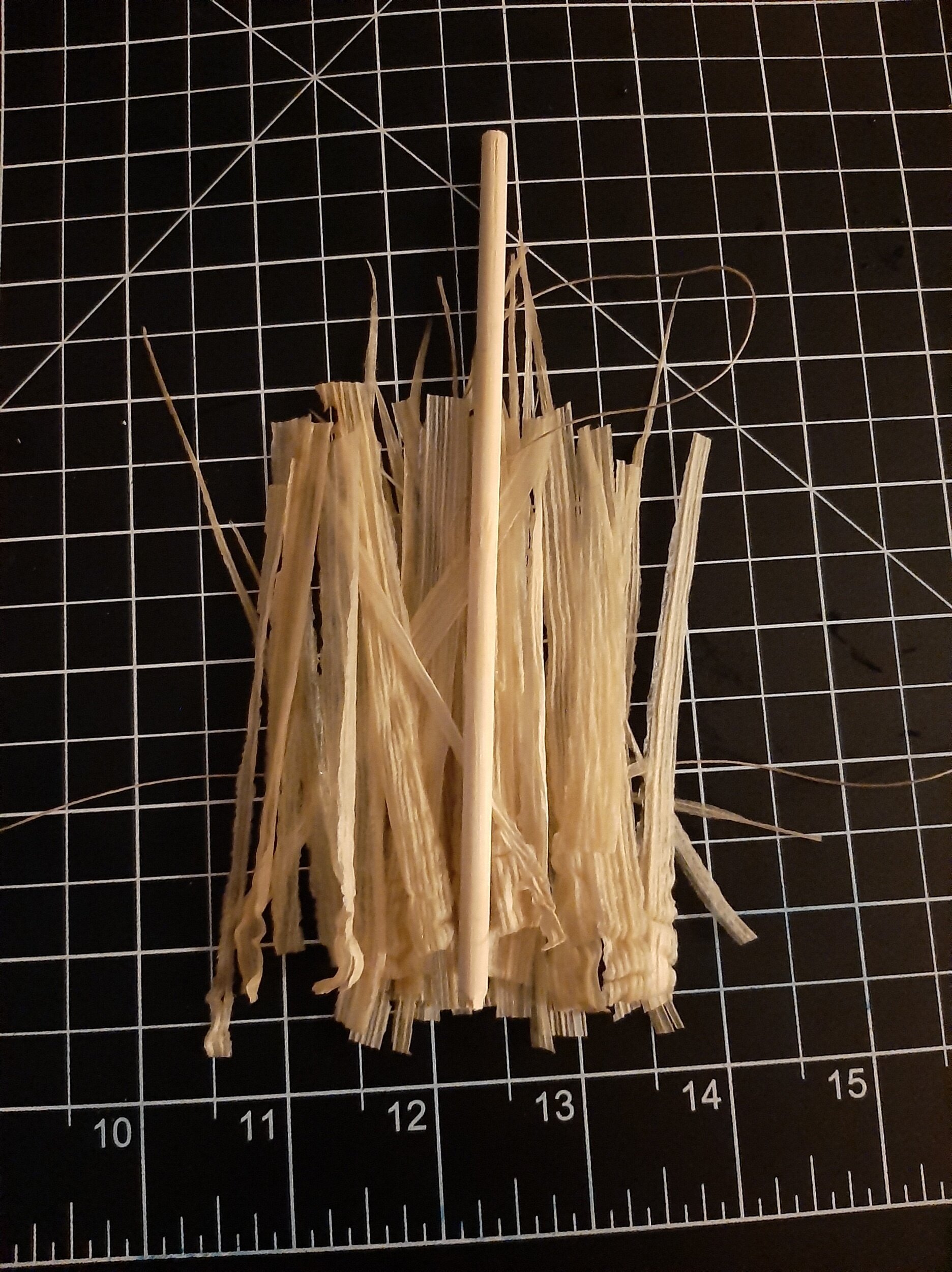 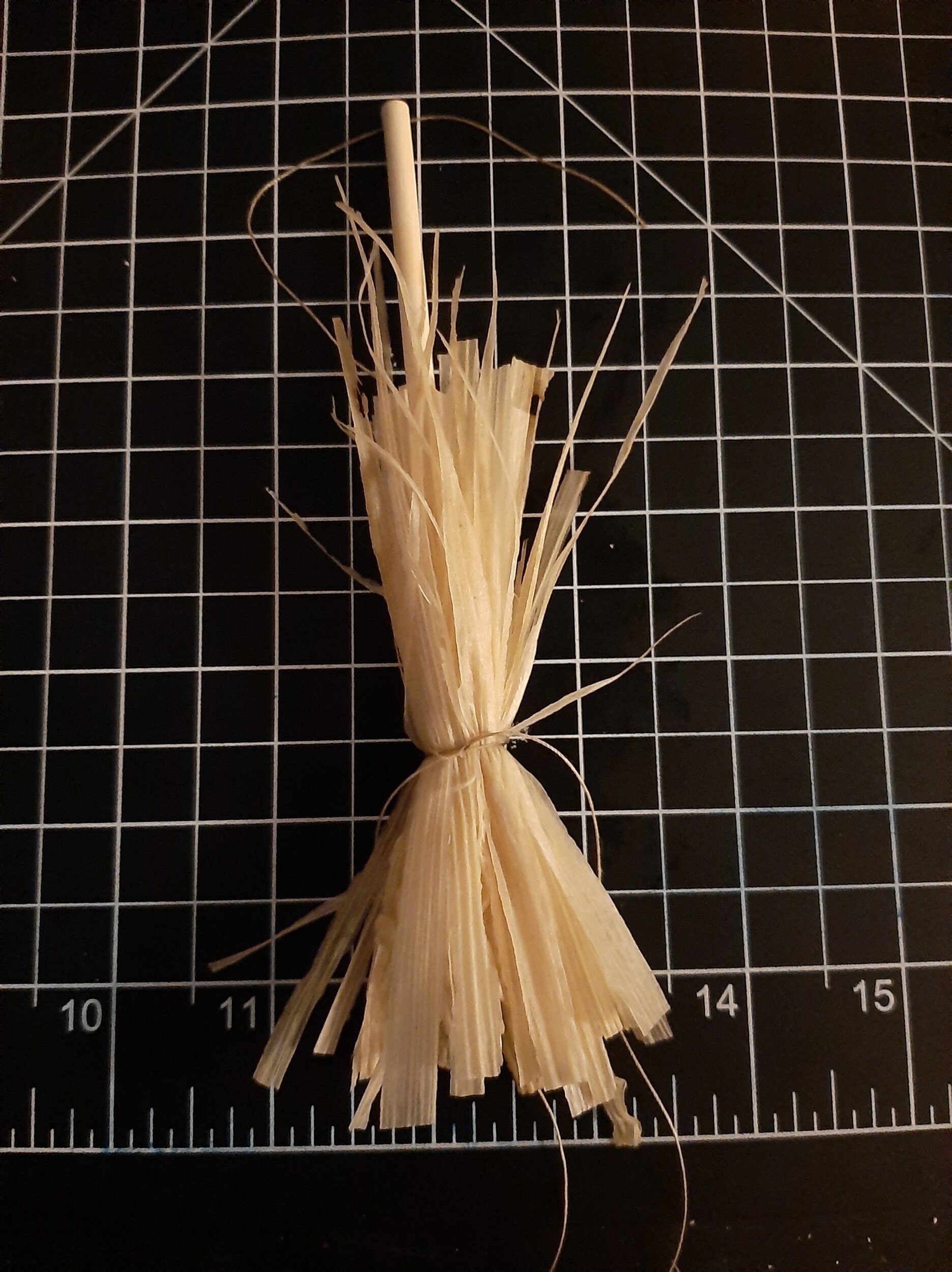 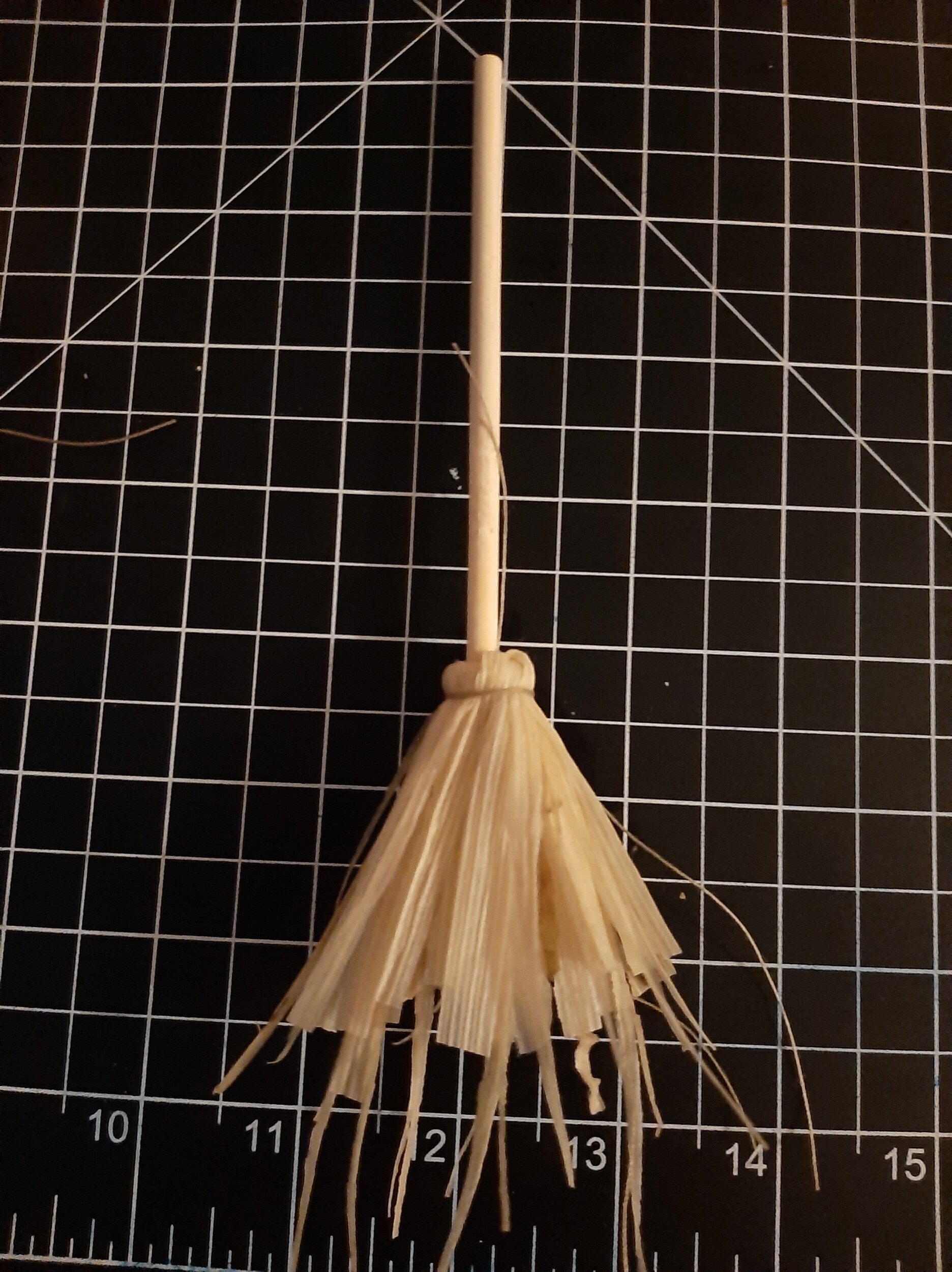 Folded down and tied at the top 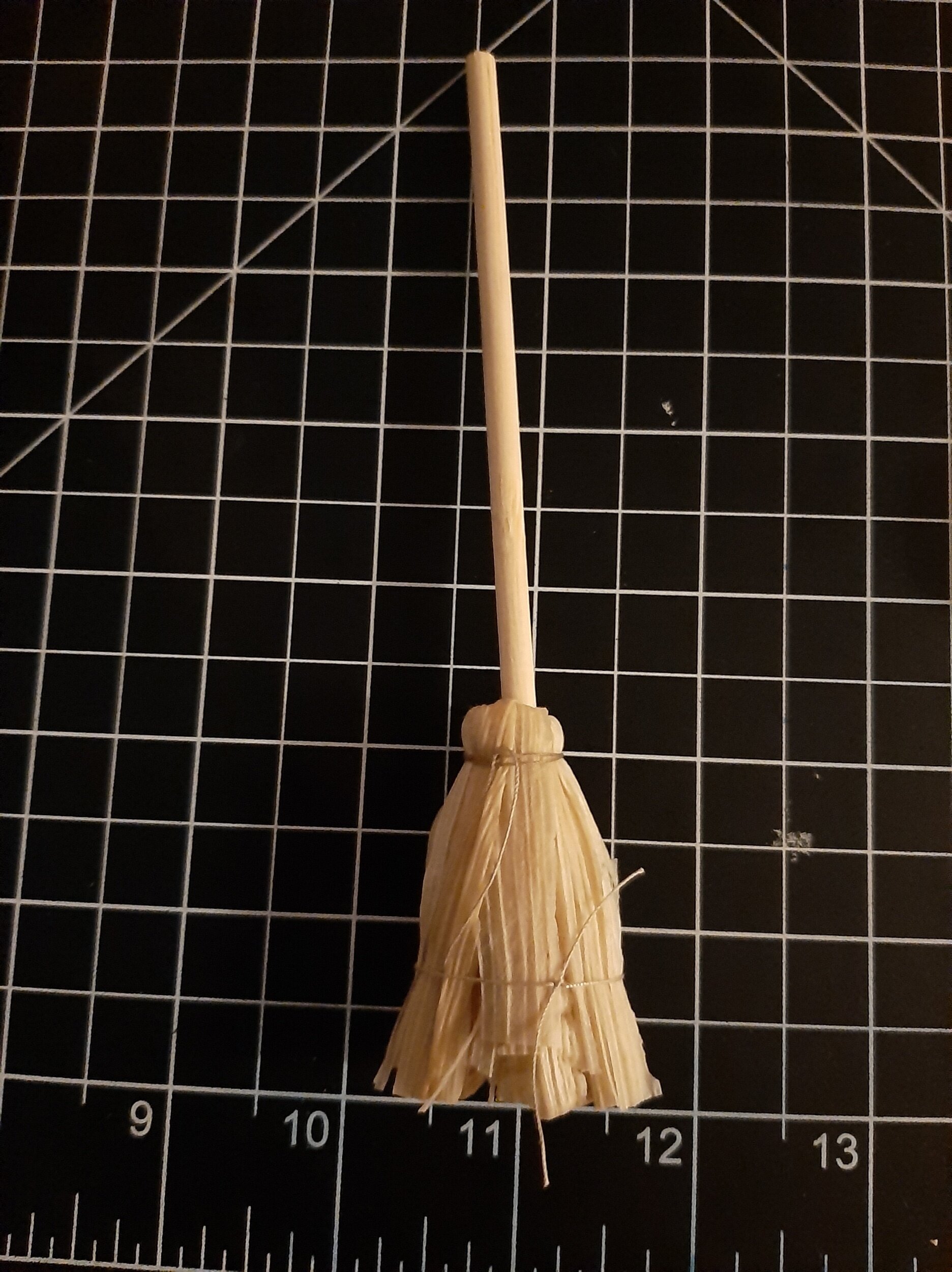 Tied gently at the bottom to help it dry in place

I decided to use the shell of a chinese lantern plant for her hair. I used a little bit of melted wax to help it stay in place. Then cut one of my black husks into a little bat, this took me a few tries. I dipped the bat in some wax and stuck it onto the broom handle. 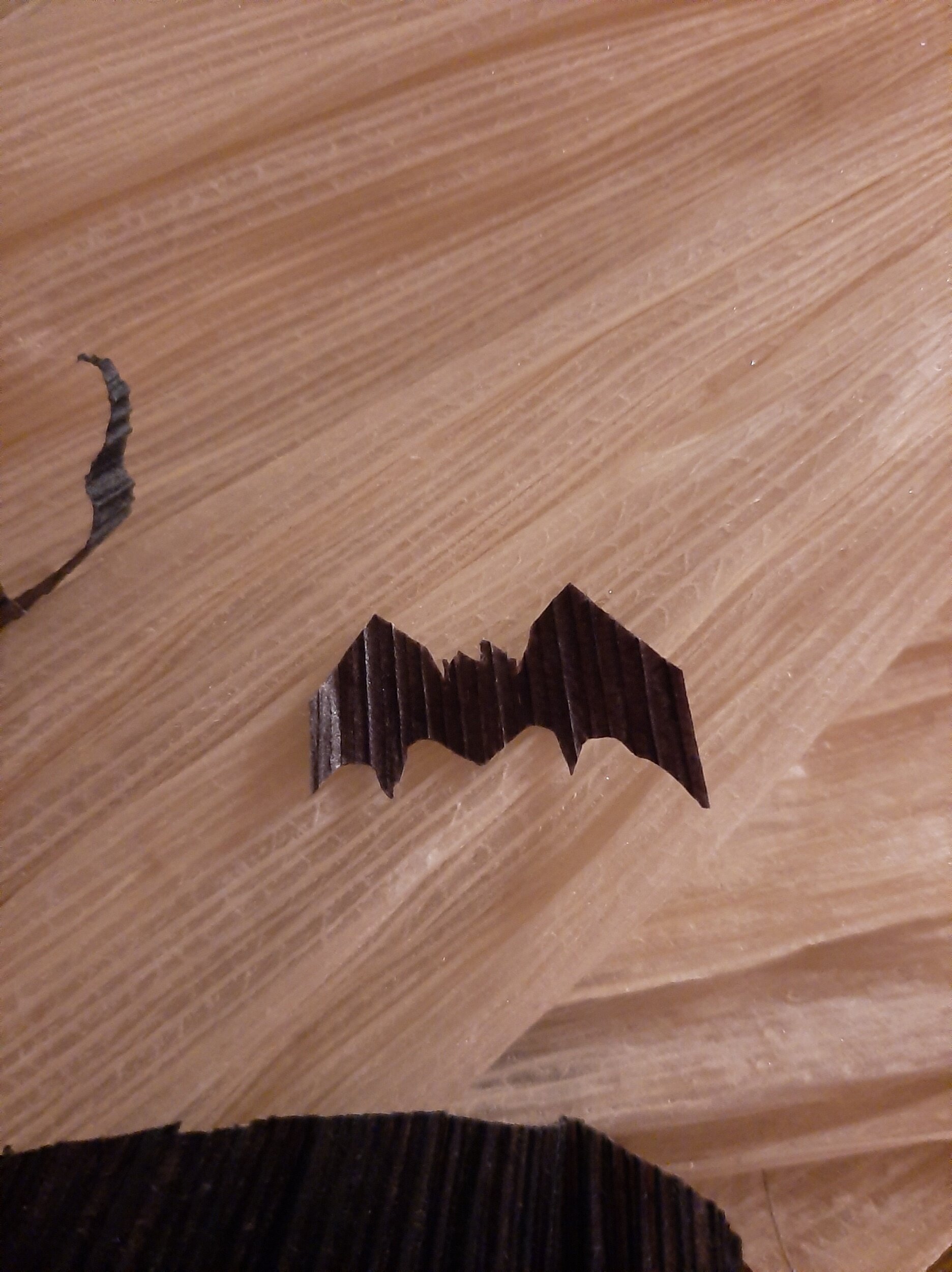 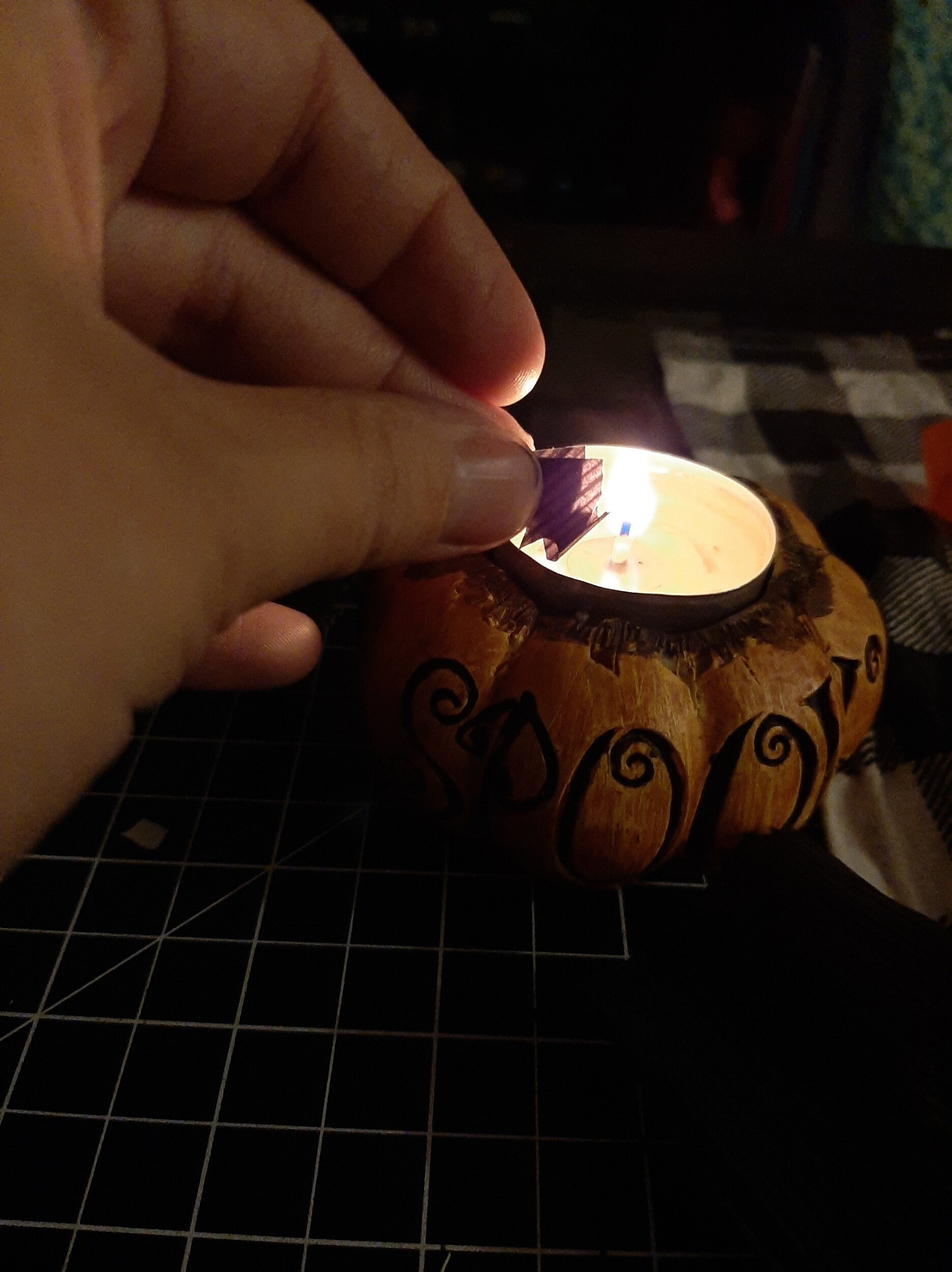 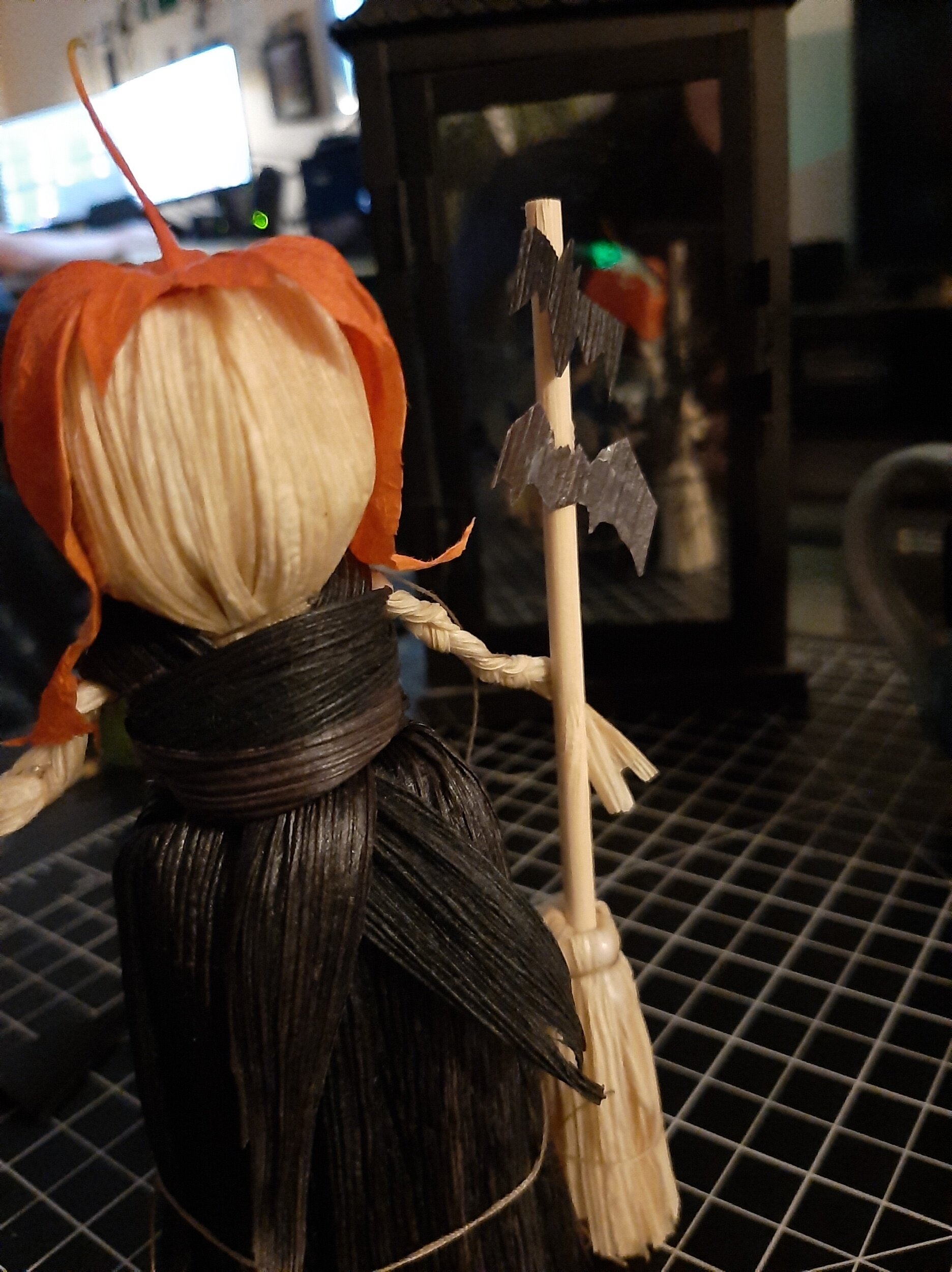 To finish off my witch I took two leaves I had picked up earlier in the day and tucked the ends of them up under her top. Then she was done!

After a few hours I took off the ties from around her skirt and the broom and let them continue to dry freely.