What is a Bakers Lame? Also known as a bread lame, dough lame, or just a whatever-you-want-to-call-it lame. You may have never heard of one or maybe you’ve seen them but never knew the name, maybe it’s a totally normal thing and you didn’t ask that question at all. Well a baker’s lame is a double sided razor used to score bread. It’s light, sharp and can make nice, deep, smooth cuts without risking those beautiful air bubbles inside your freshly risen dough.

You can buy them on amazon for pretty cheap, or I’ve seen other DIYs that are super simple but totally work. You can skip it entirely and keep using a knife or, like me, use a razor blade without a handle stored in the back corner of your cupboard safely out of reach of little explorers hands. I have been intending to make my own for some time and it took until Christmas, when I decided to make a couple as gifts, that I finally did it.

I figure if something is going to take up any space in the kitchen that only has one use it better at least be beautiful. That’s why I never went for the cheap ones on amazon and instead opted to make something a little special and not so simple.

For this project I needed three materials and a bunch of different tools.

My first step was to cut the stick to the correct length, I wanted the handle to be big enough to have a good hand hold but not take up a huge amount of space. Then, using a saw blade on my Dremel, I cut a slit in the side where I wanted the blade to go. It was just a preliminary slit and would be fine tuned later.

Then I used some carving tools to get rid of the bark, and start shaping the tool. I rounded the ends and carved out the head making sure it was narrow enough for my screws to go all the way through and have the nut fit on the other side without too much overhang. 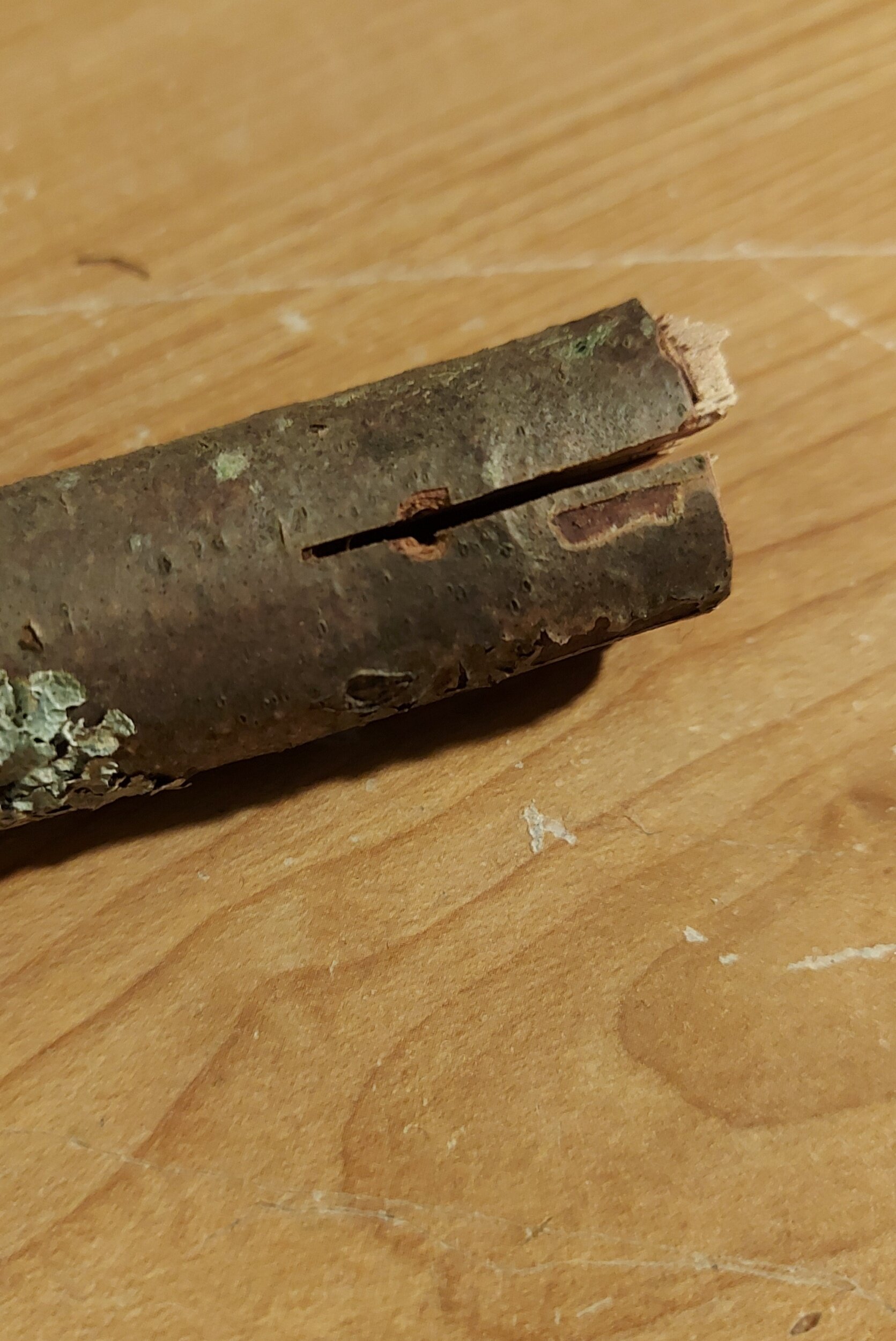 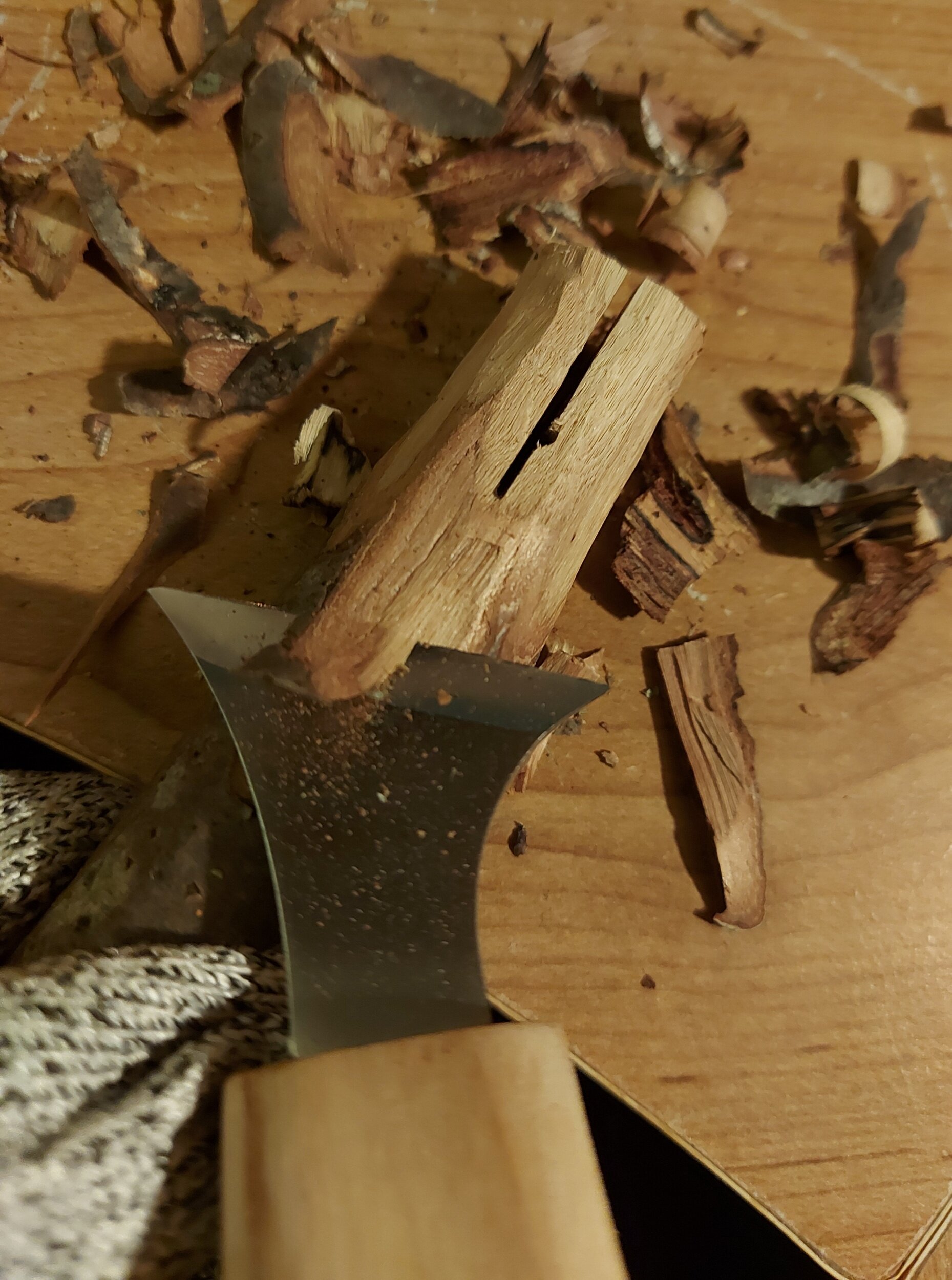 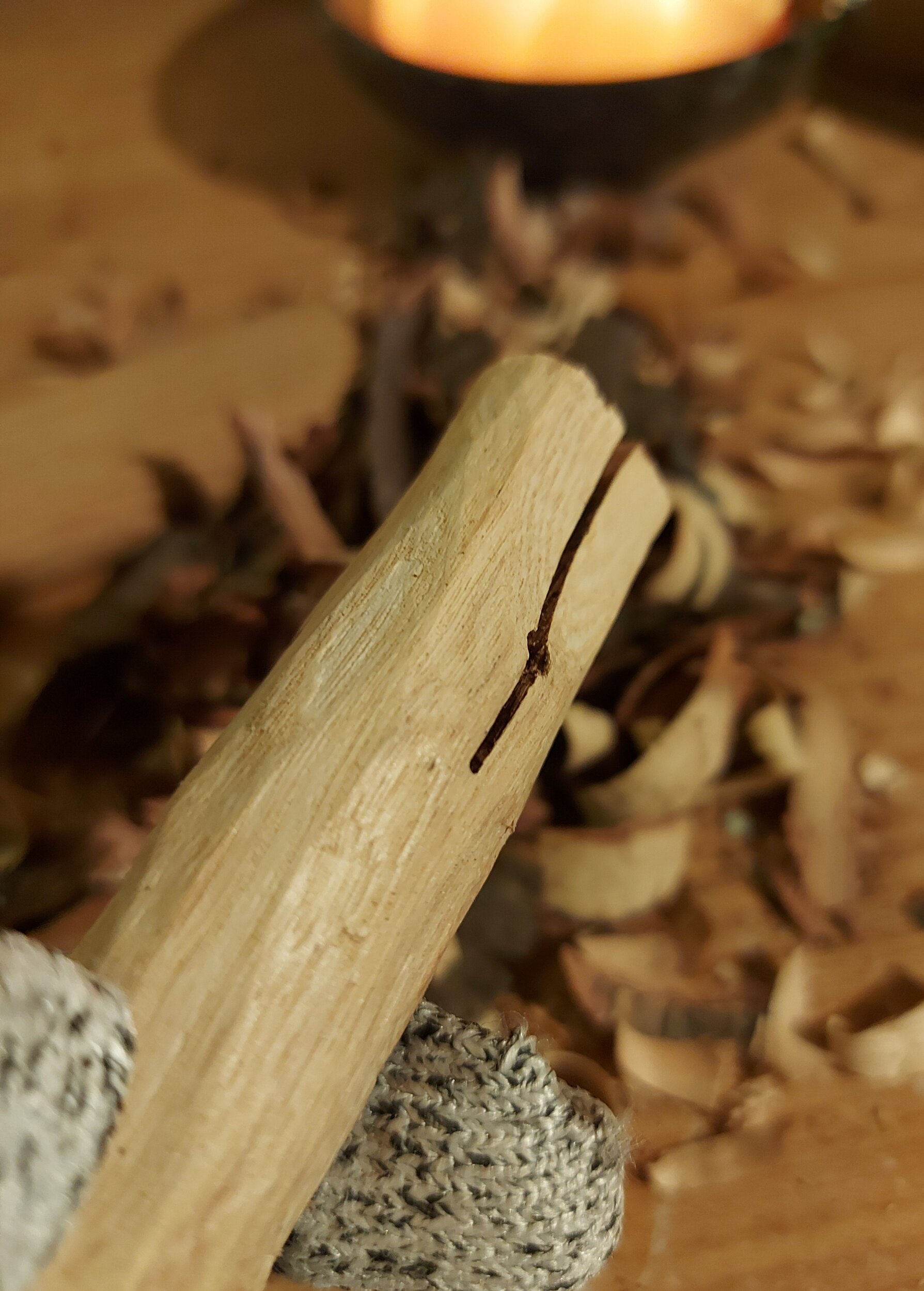 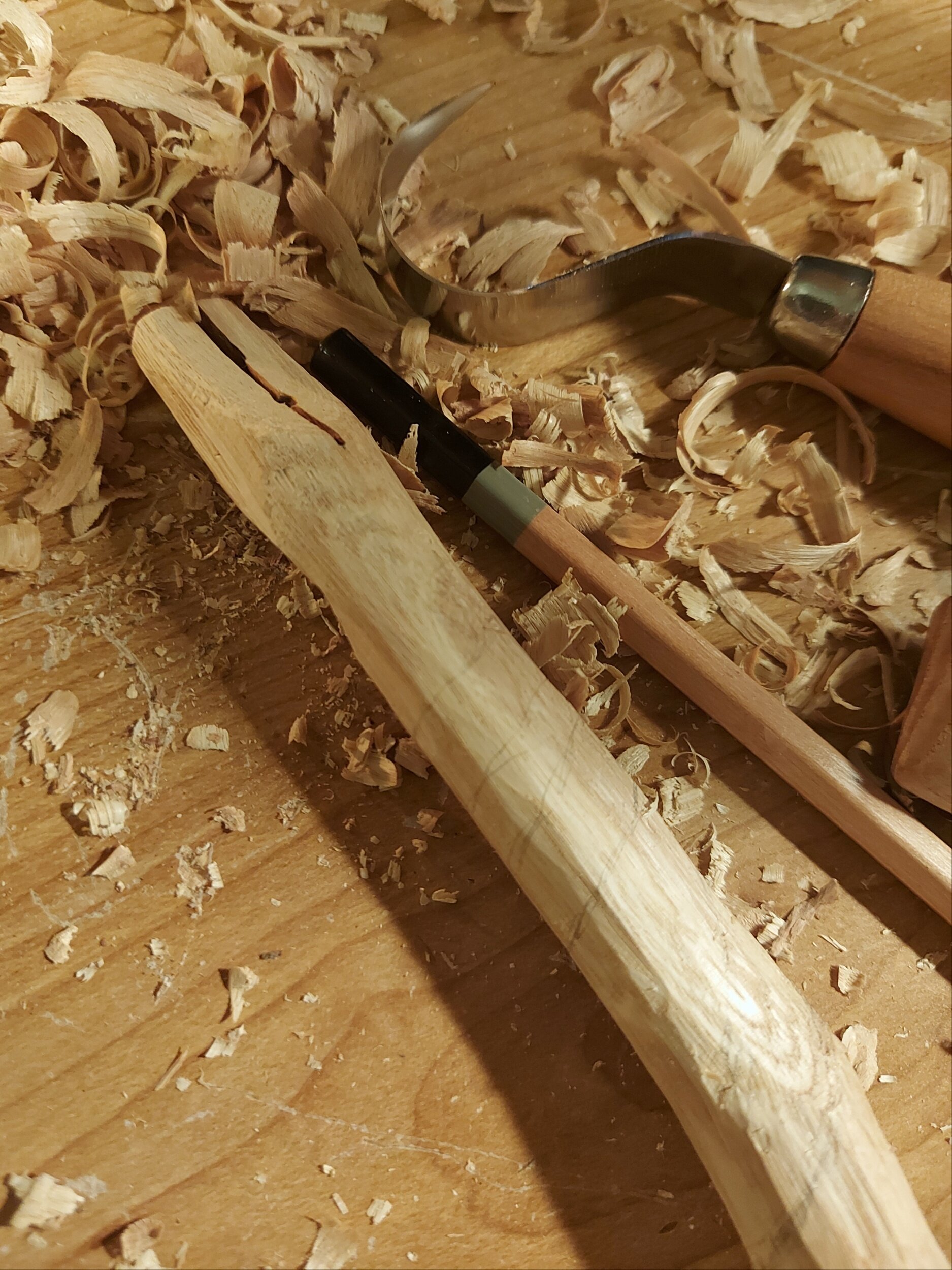 When I had the basic shape, I then carved in the details starting by drawing in the line then carving it out. Once carved, I went back to the Dremel and used a sanding tip to smooth out some of the lines and sand out the rougher spots. The Dremel is a little aggressive when it comes to sanding so to actually finish it I used a couple different high grit sandpapers and did it by hand. 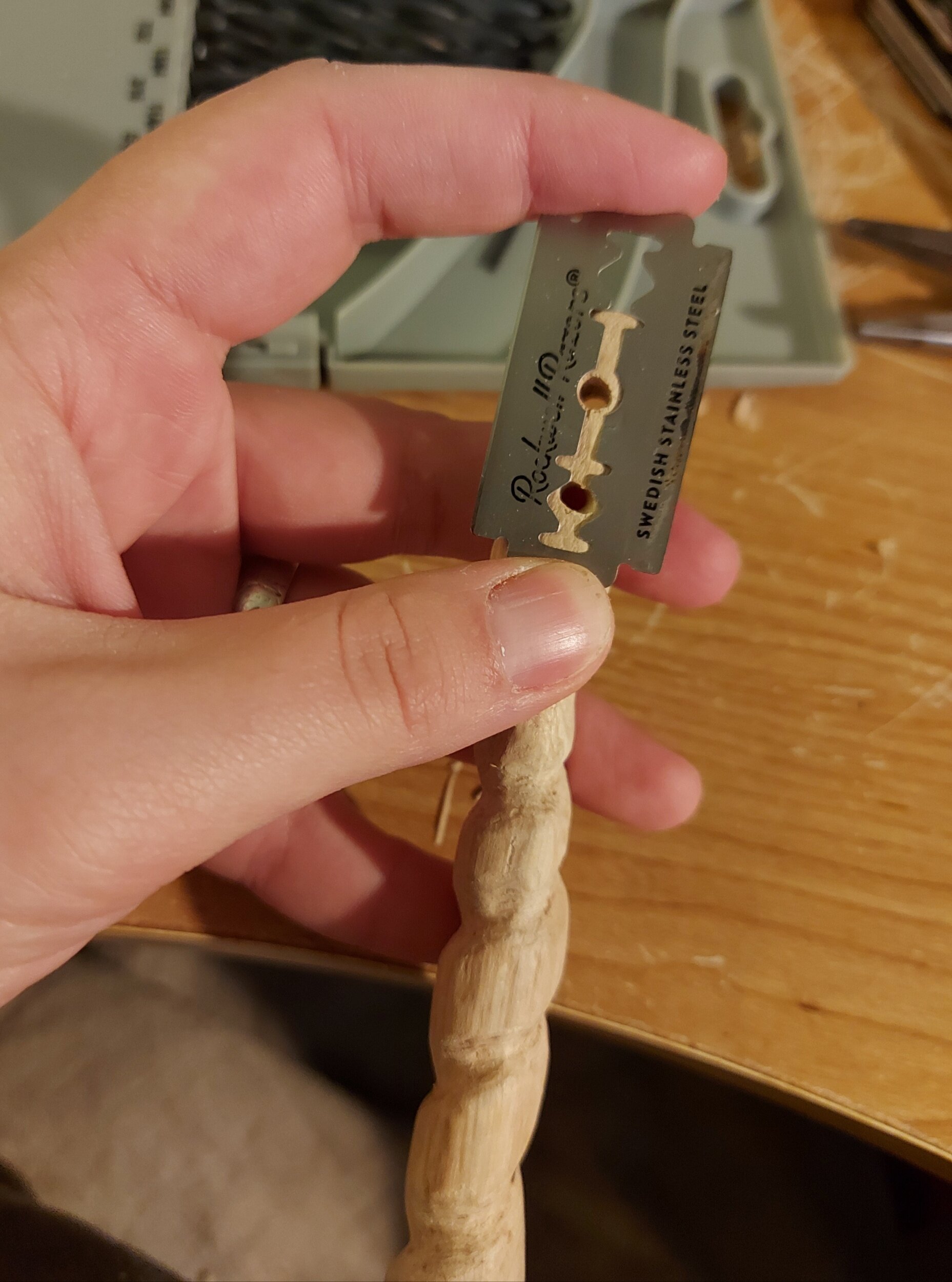 On the head of the lame I marked out where I wanted the blade to fit, then I used the saw on the pocket knife to get the slit I cut earlier to the right length and angle. Once it fit properly I marked the placement of the two bottom holes of the blade. This is where the screws will go. I carefully drilled through the head then tested the screws and made adjustments where needed. 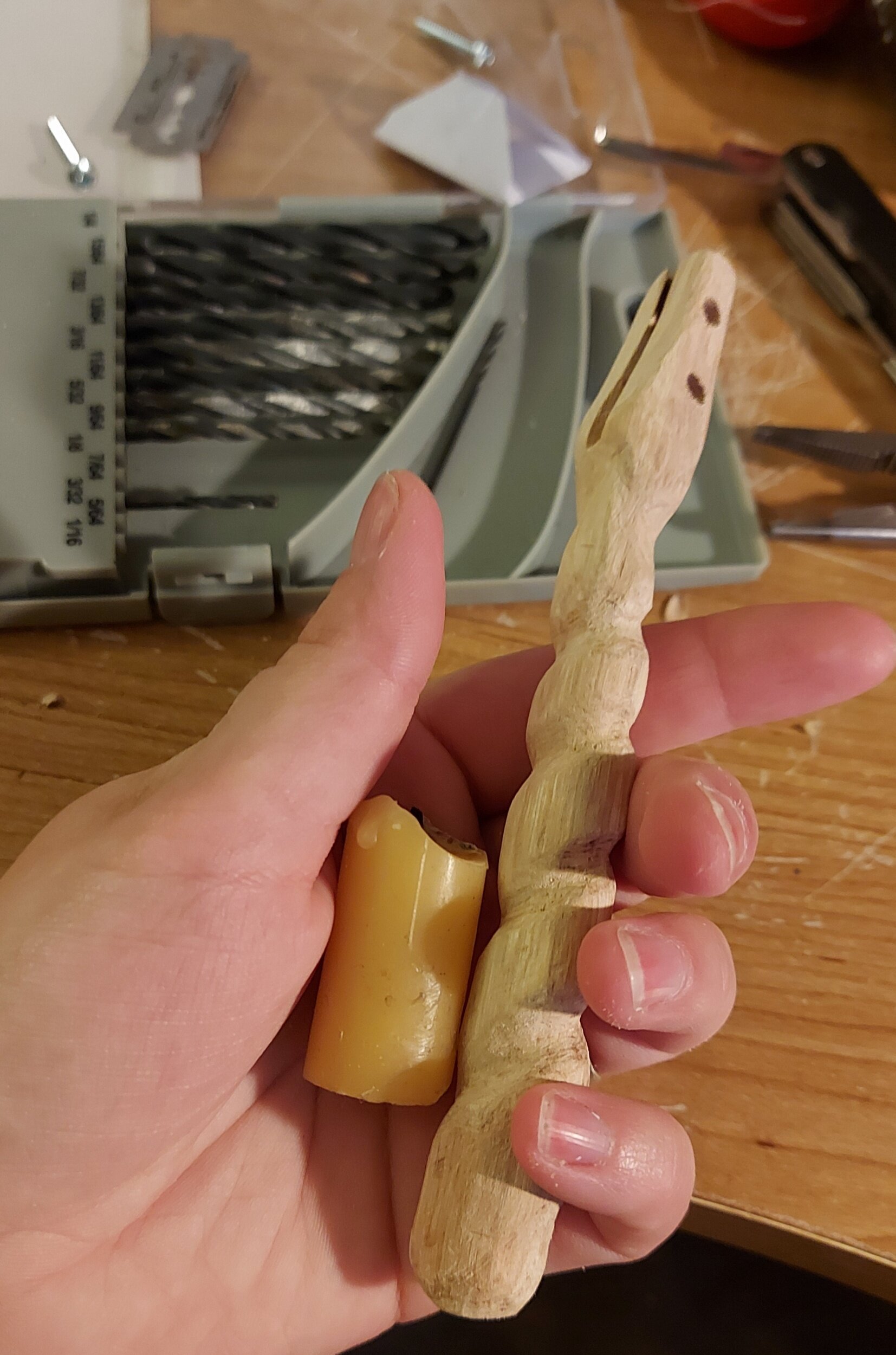 I removed the screws and finished it using the stub of a beeswax candle. I rubbed the handle along the candle then rubbed it quickly over a piece of linen to melt the wax with friction. I continued this process until it was all covered and there was no stickiness from the wax.

On one of them, prior to finishing with wax, I ran it over the flame of a candle to blacken it then I wiped it away and sealed it. 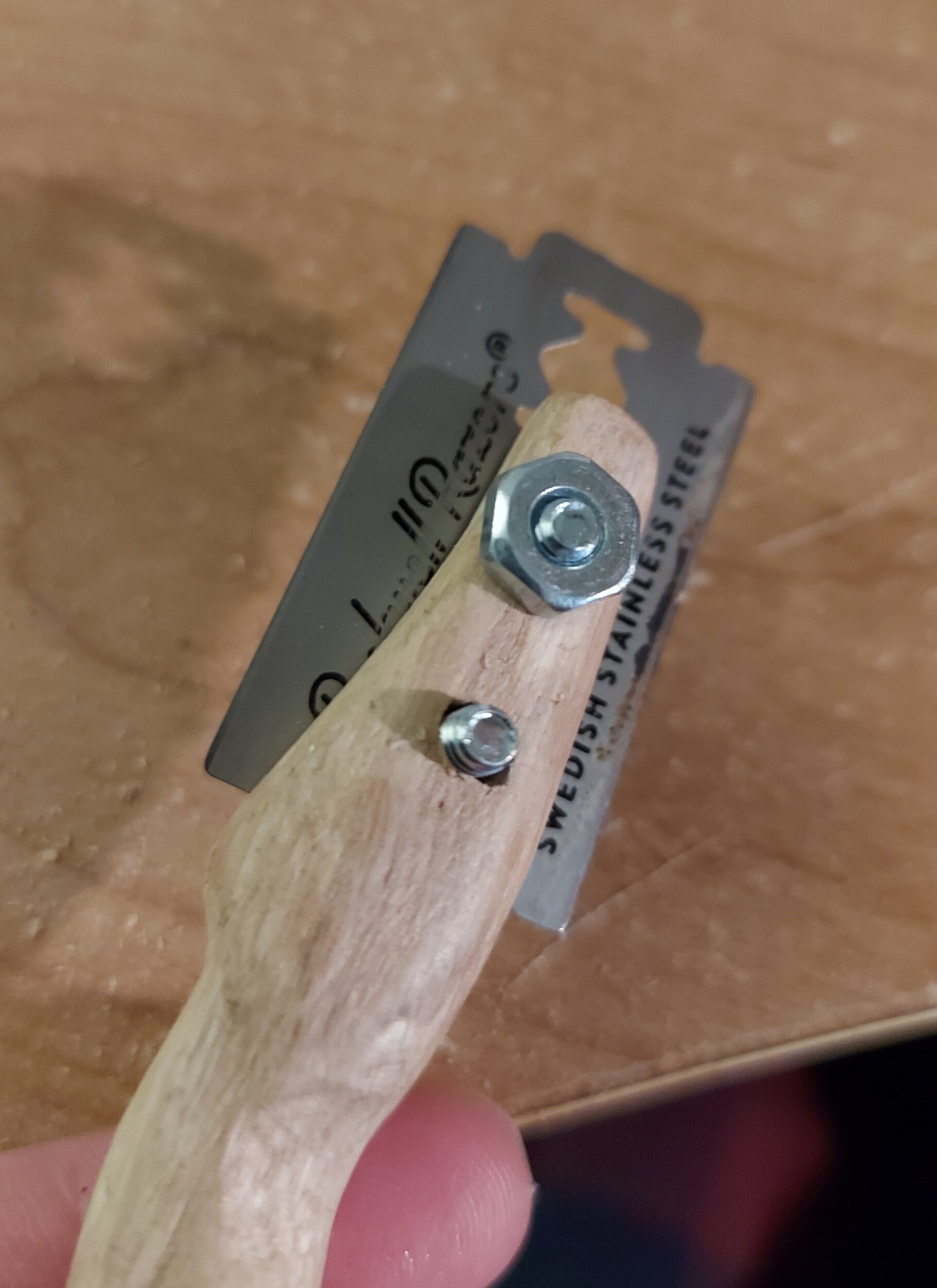 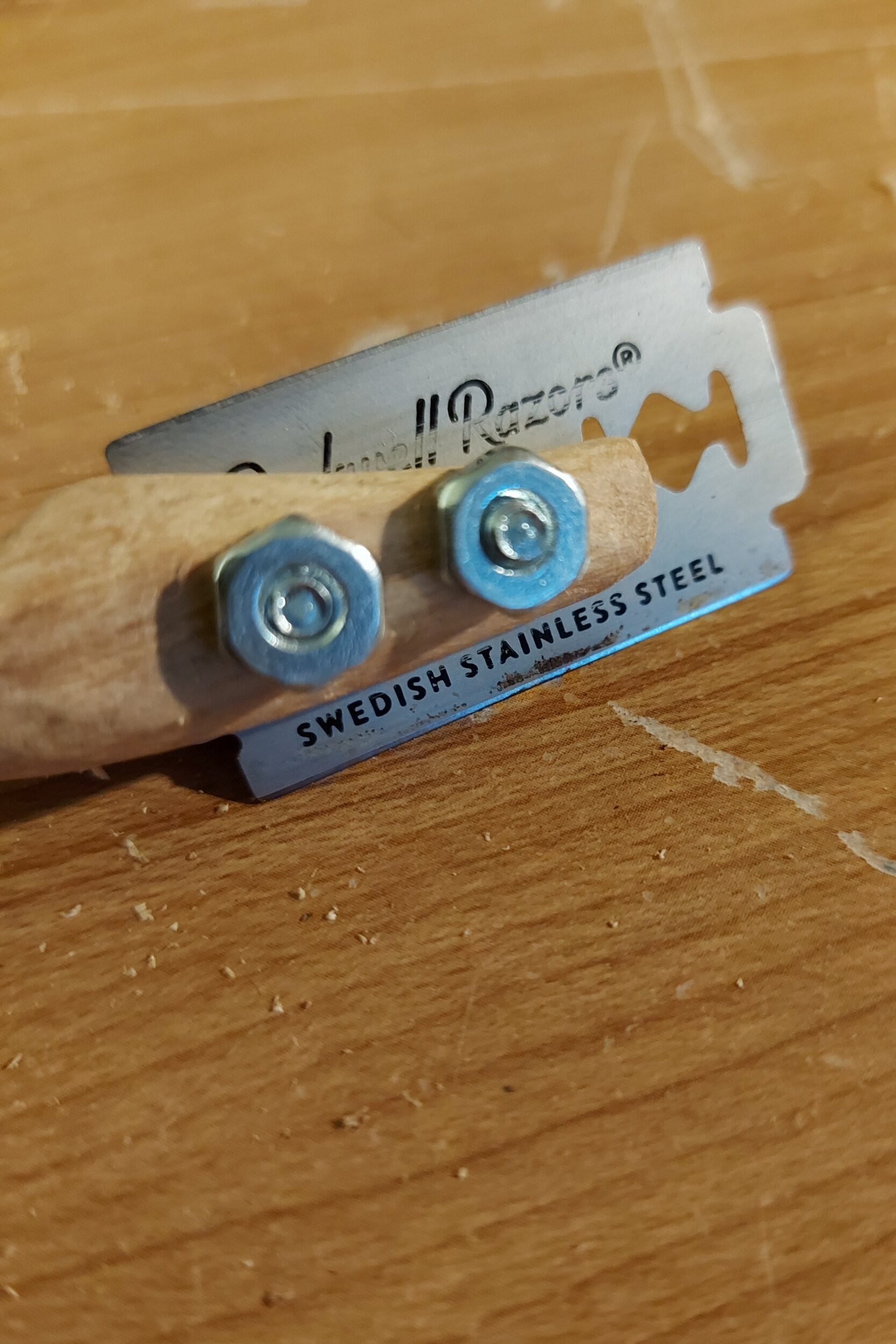 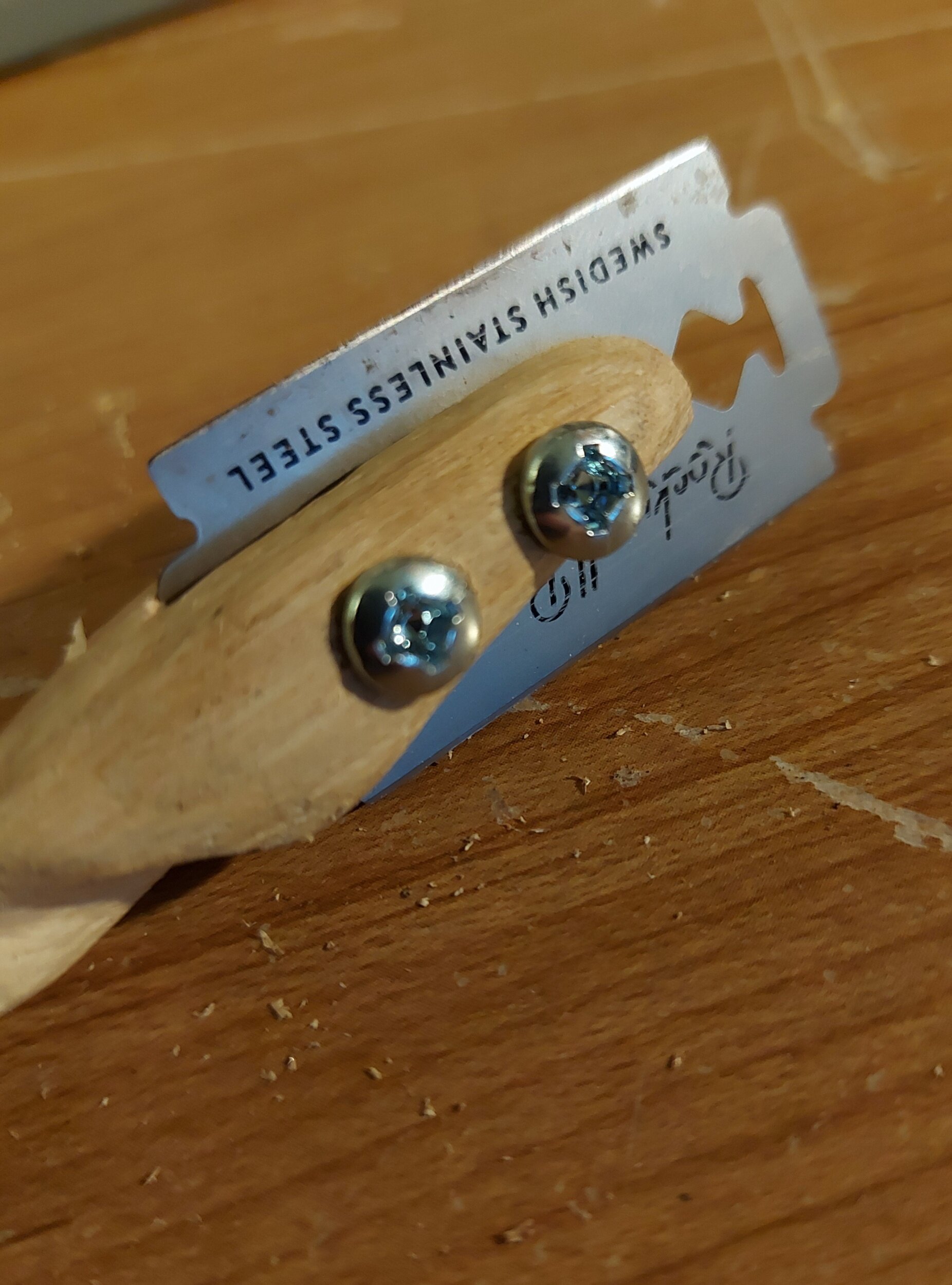 When it was completely finished I assemble it, placing the blade and fixing it in place with my two machine screws and nuts. 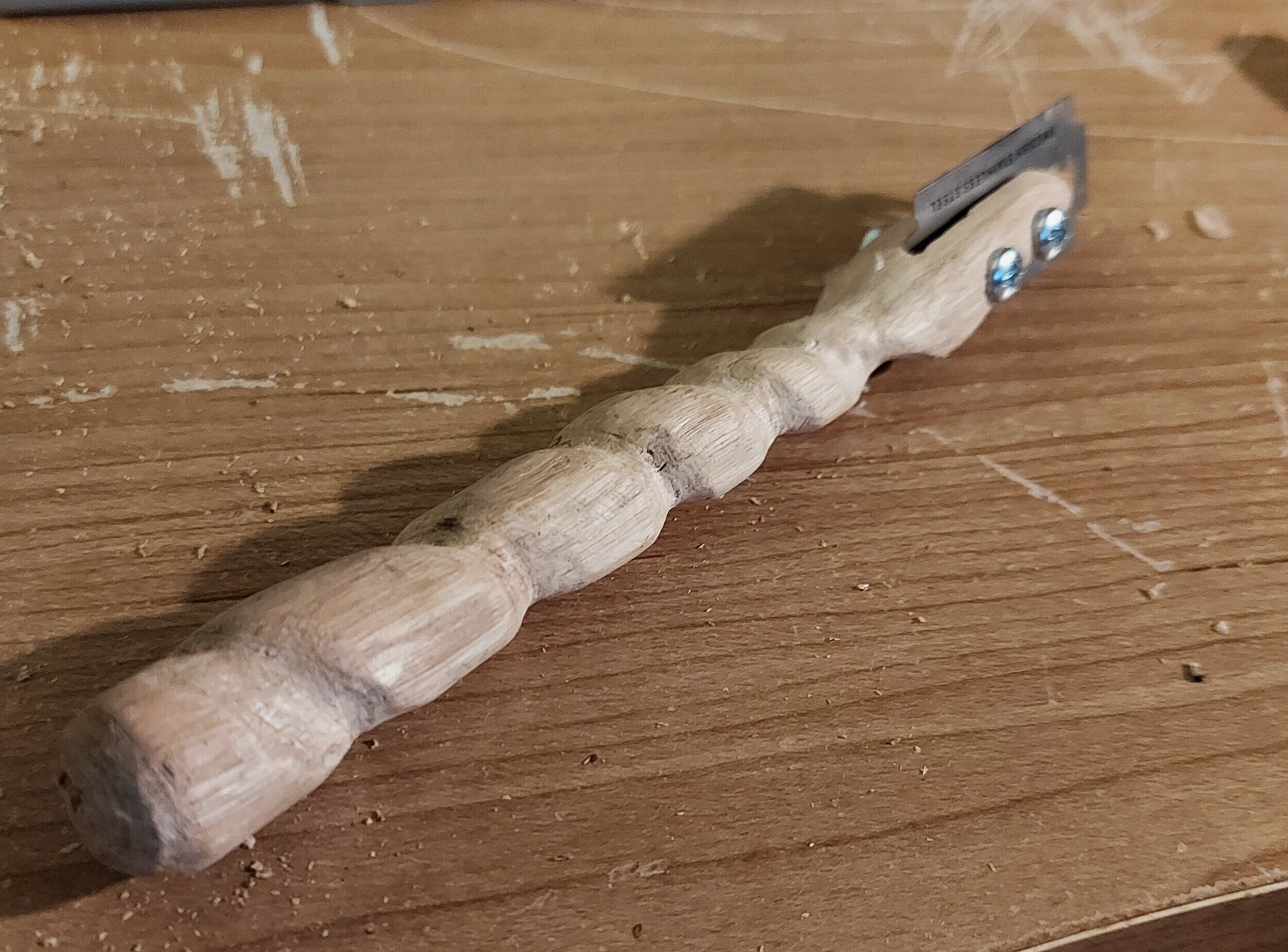 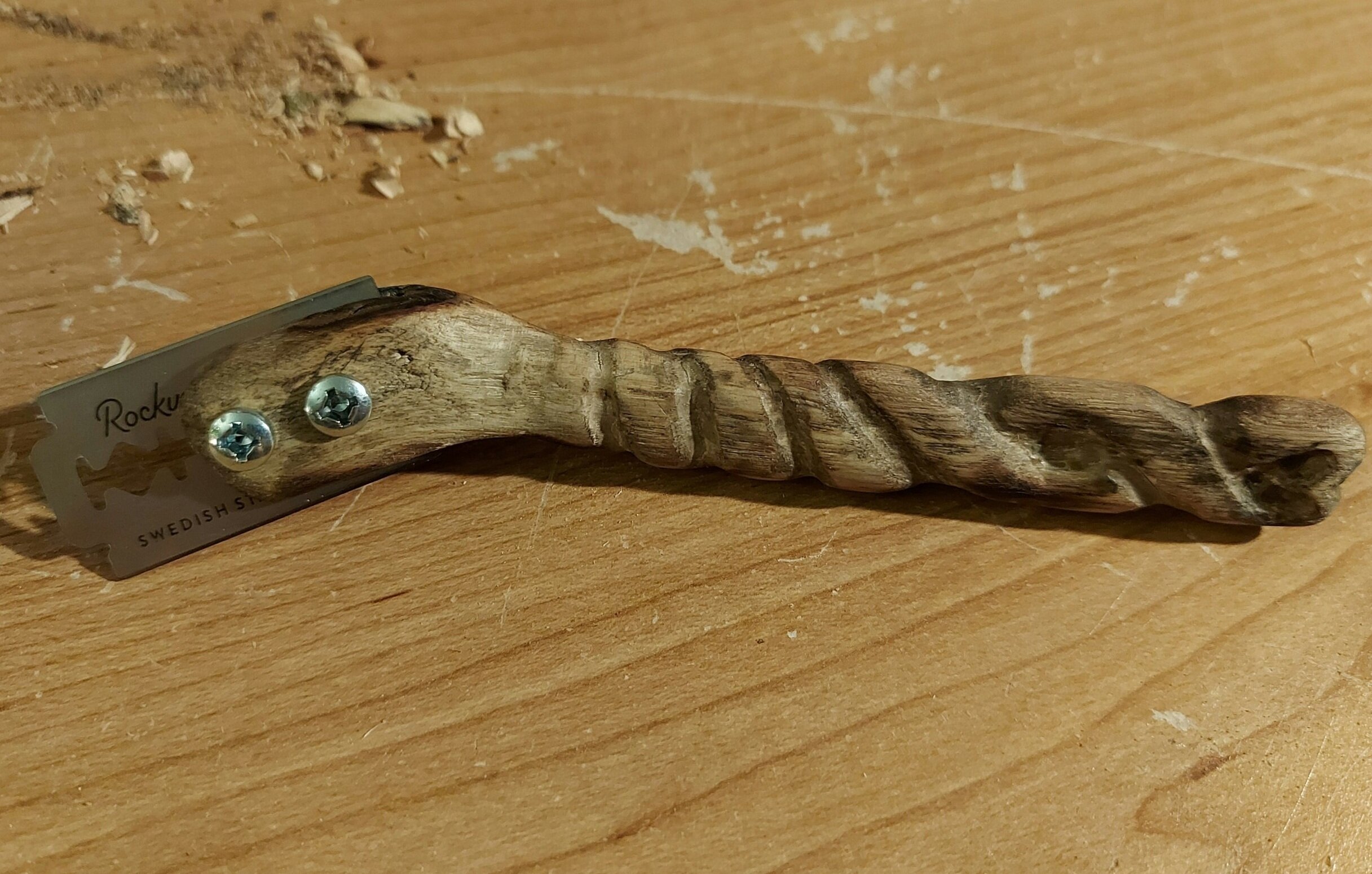