This first week of the 31 days of Halloween has been a complete roller coaster but here it is, the 7th post marking the end of the first week! That means it is food time. Some of the most exciting things to create are ones that have a short life span. These things will disappear, sometimes in less time than it took to create. This is called “ephemeral art”. It comes in all shapes and sizes, from the carefully planned swirls in the foam of your latte to the sandcastles and dragons built at the beach. The most common one most people think about is probably birthday cakes, they can get quite complex. Today, though, I am making a pumpkin tart.

First things first, roasting the pumpkins. You can use a can of pumpkin puree but where is the fun in that? I picked up two small sugar pumpkins from the local farmers market as soon as they came out this season and, until now, they have been brightening up my kitchen counter. Now it’s time for them to evolve.

I cut them in half and scooped out the seeds. Then I rubbed them down with butter, I figure this is the best way to make a squash feel loved. Next pop them in the oven at 375f degrees for 40 minutes or until tender. Once my pumpkins were cooked and cooled I removed the skin and mushed it all up with a fork to get it to a more useable texture. As I used fresh pumpkin puree for my recipe it needed less liquid, if you choose to use canned pumpkin puree you might want to add an additional ¼ to ½ cup milk or your desired milk substitute. 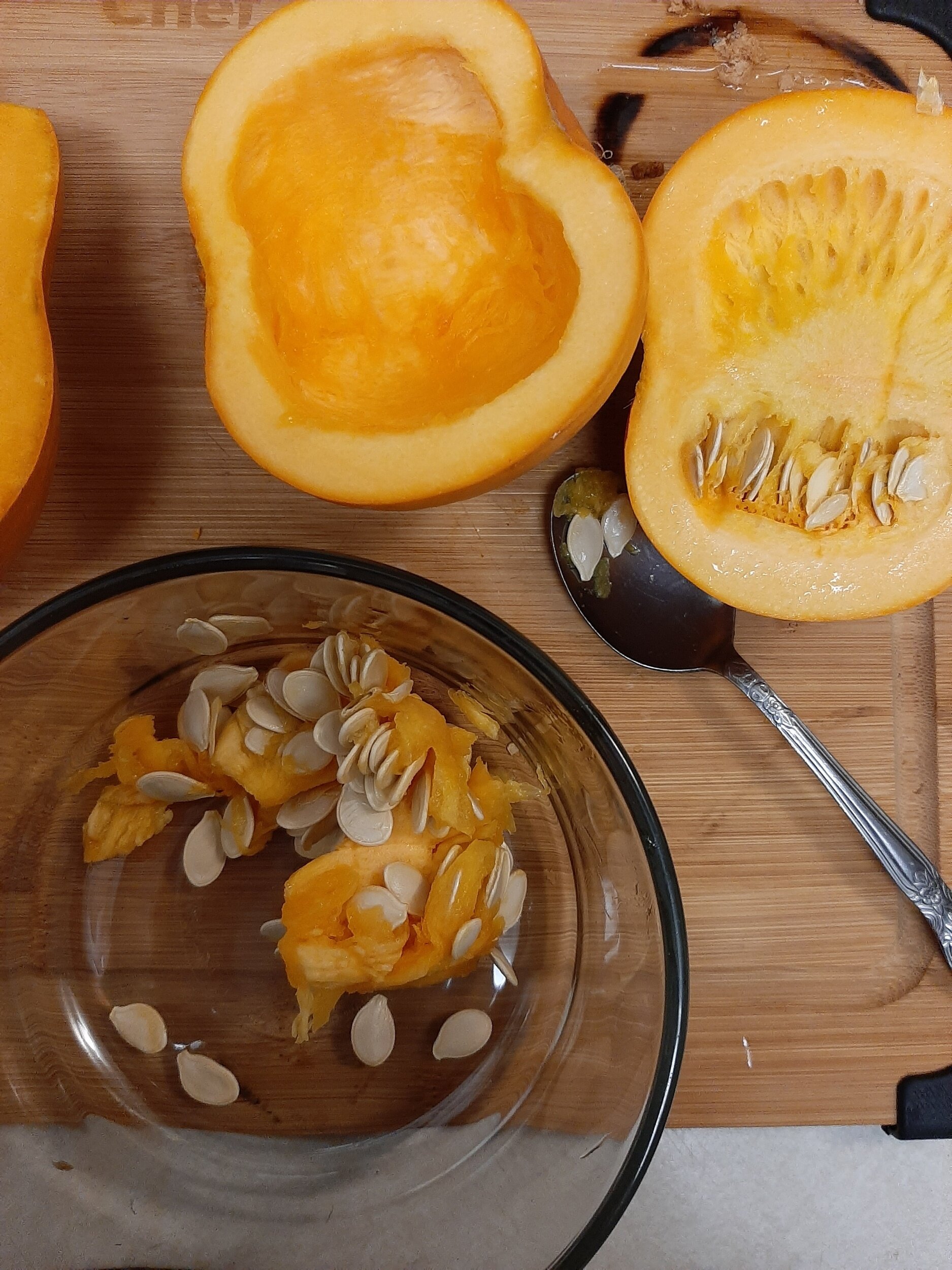 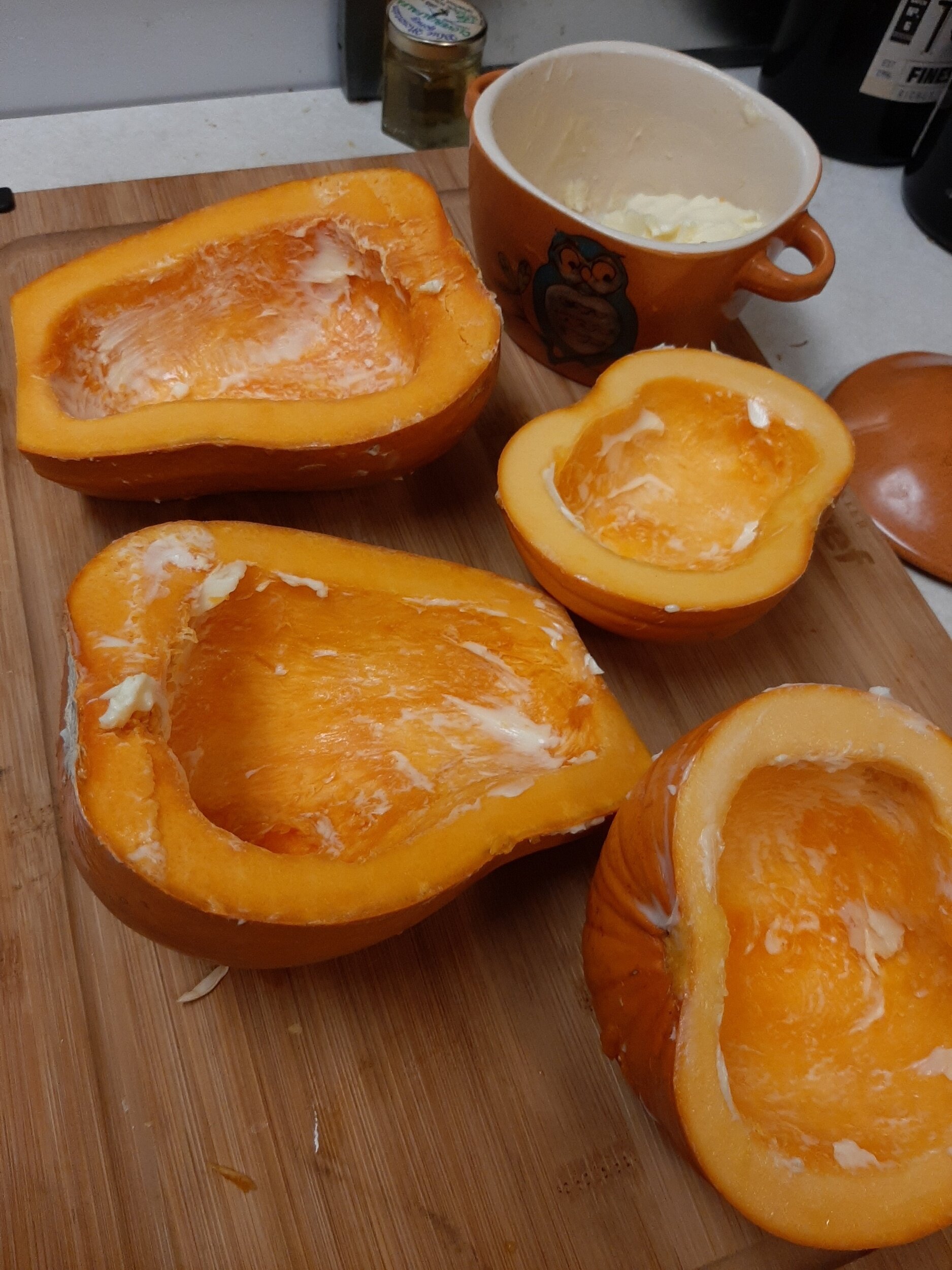 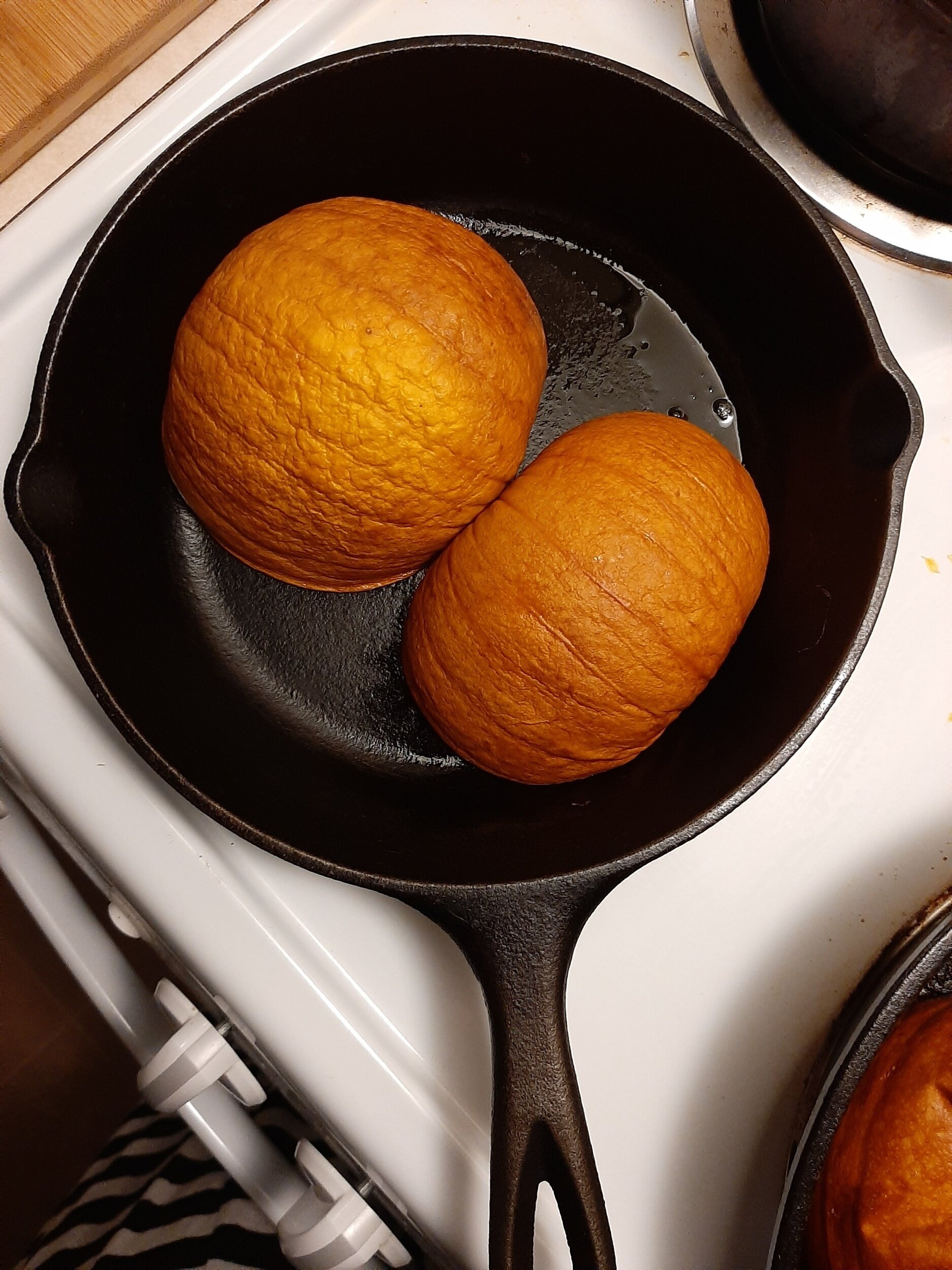 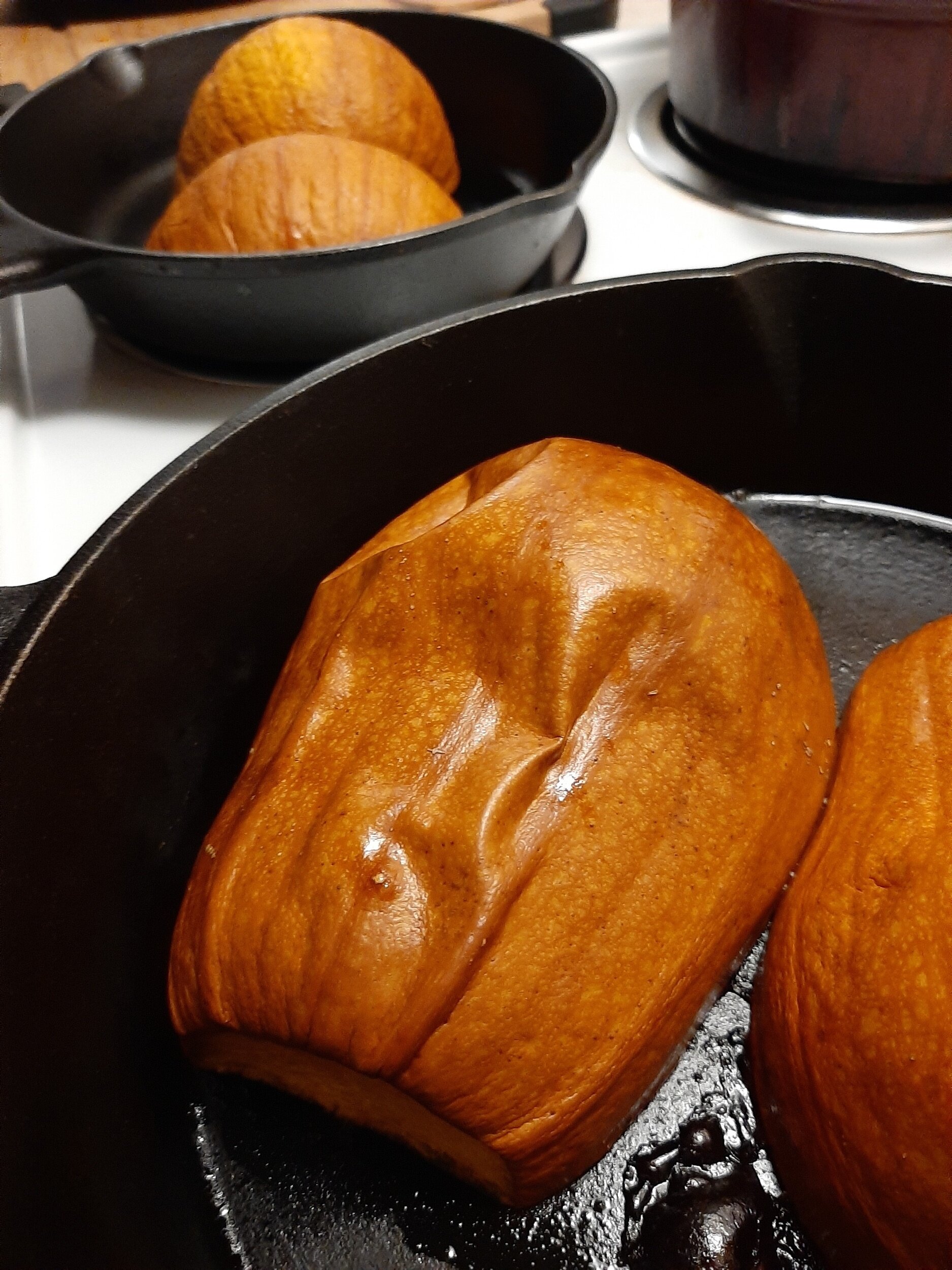 While these are roasting I put together the tart crust. I used a classic pastry dough made of flour, butter, and ice water. Make sure the butter is cold and don’t add too much water. There are plenty of these recipes out there so for now here is one that works well. I only needed half of this recipe so I wrapped up the rest and put it in the fridge for a later project.

I rolled out my dough as thin as I could and placed it in my tart pan, pulling it all the way up the sides (it will shrink when baked). I cut away the excess and sliced holes in the bottom to prevent large bubbles forming, then baked it at 325f for about 15 minutes (or until it starts to turn slightly golden brown.) 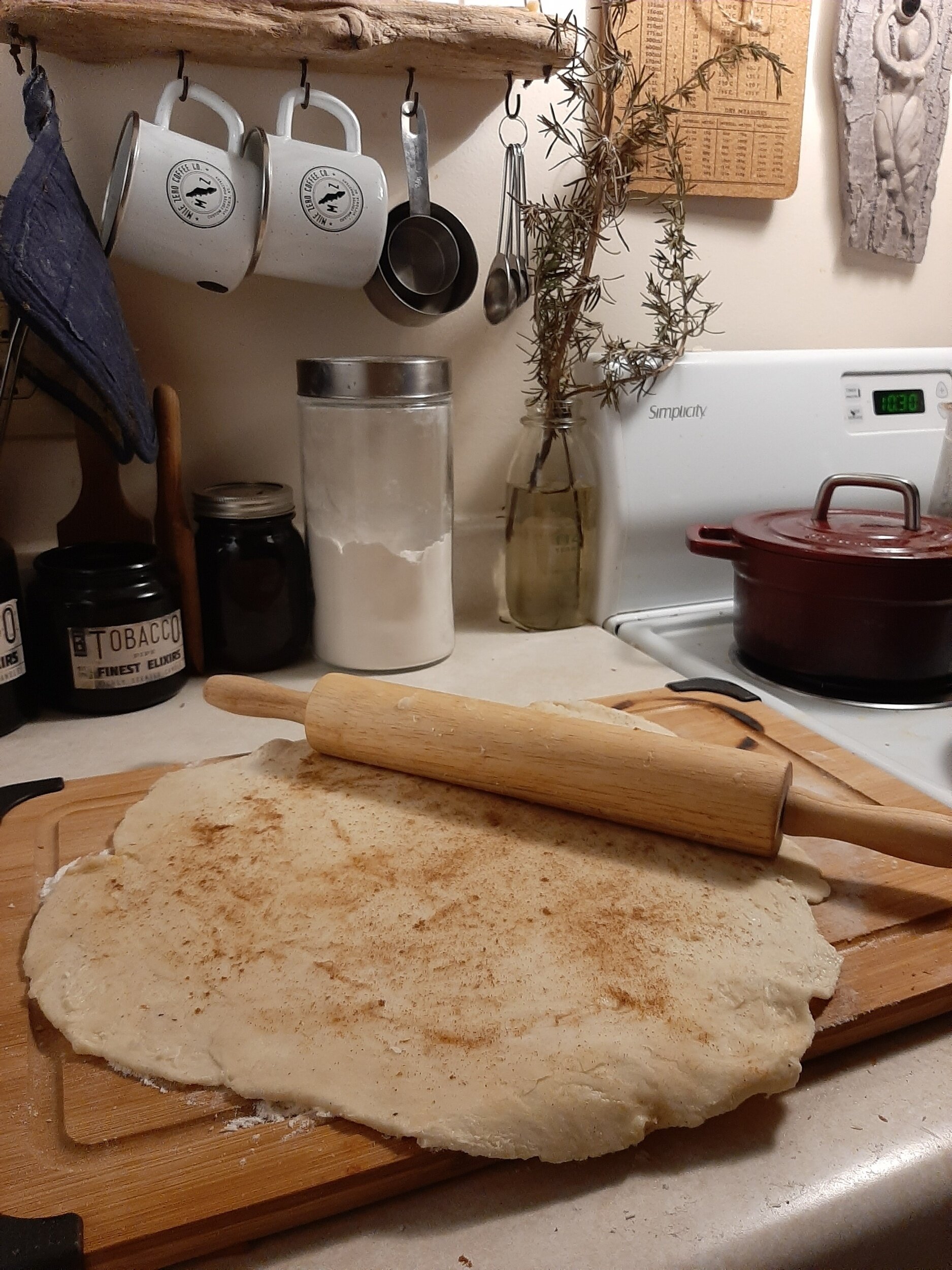 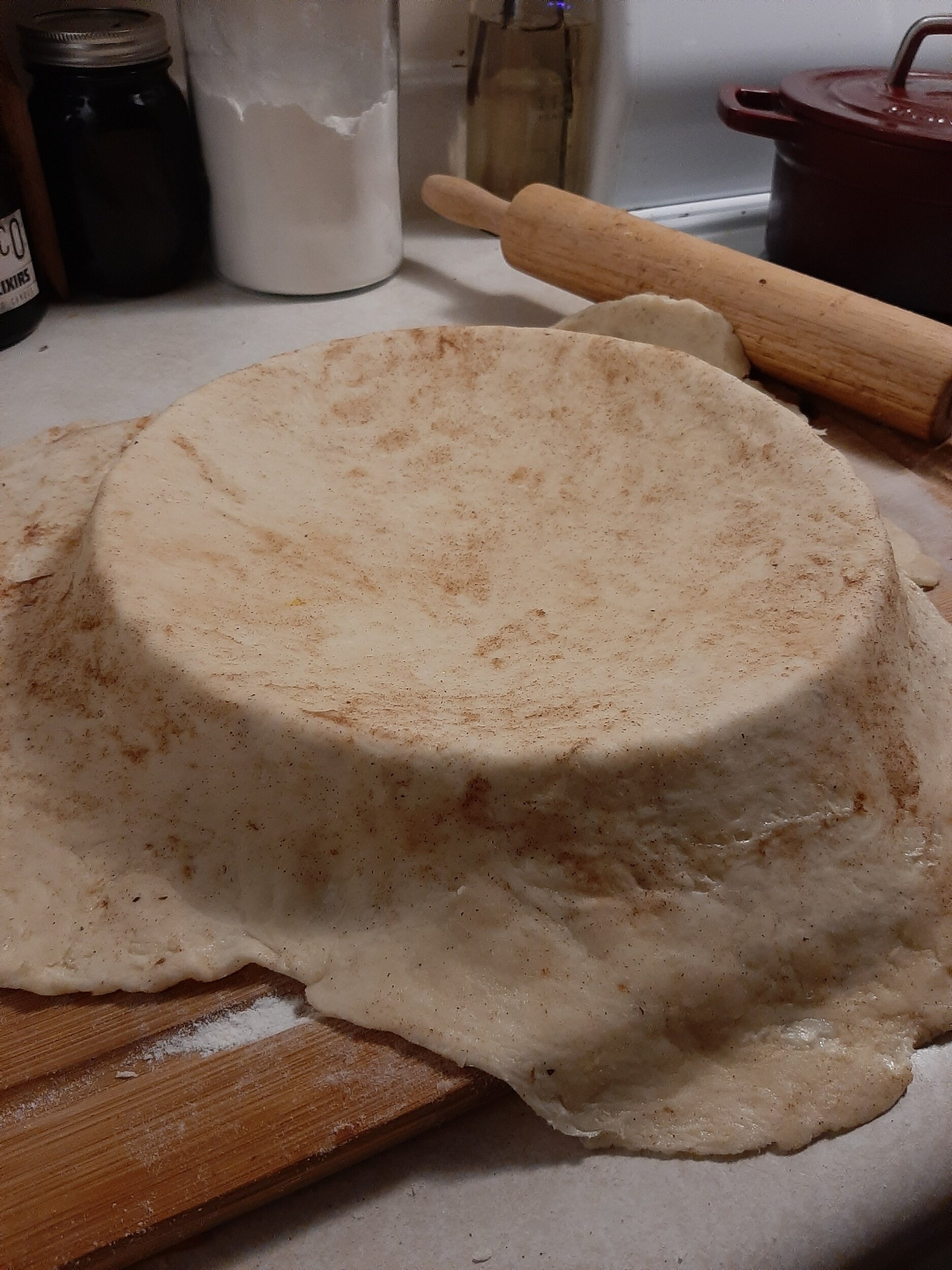 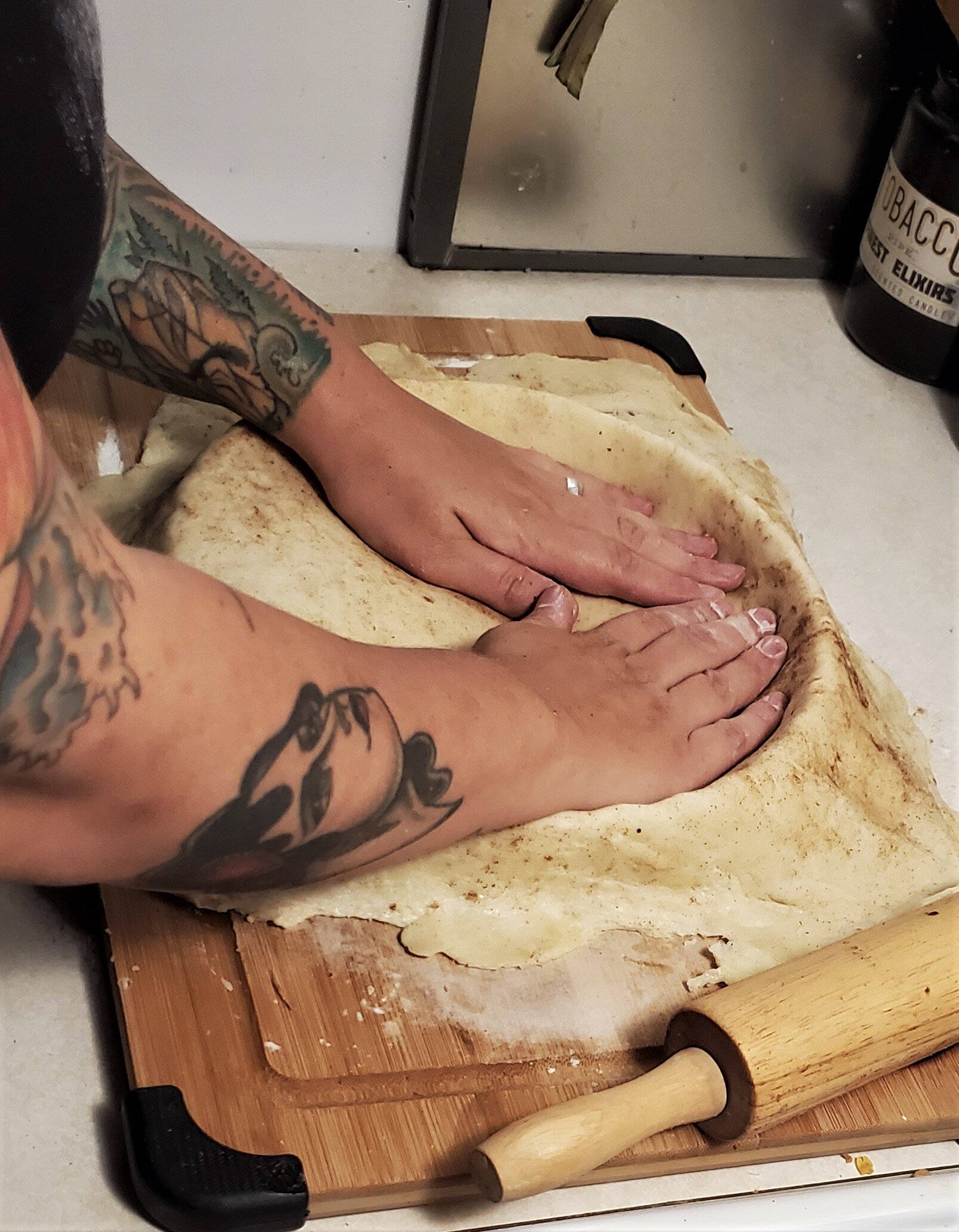 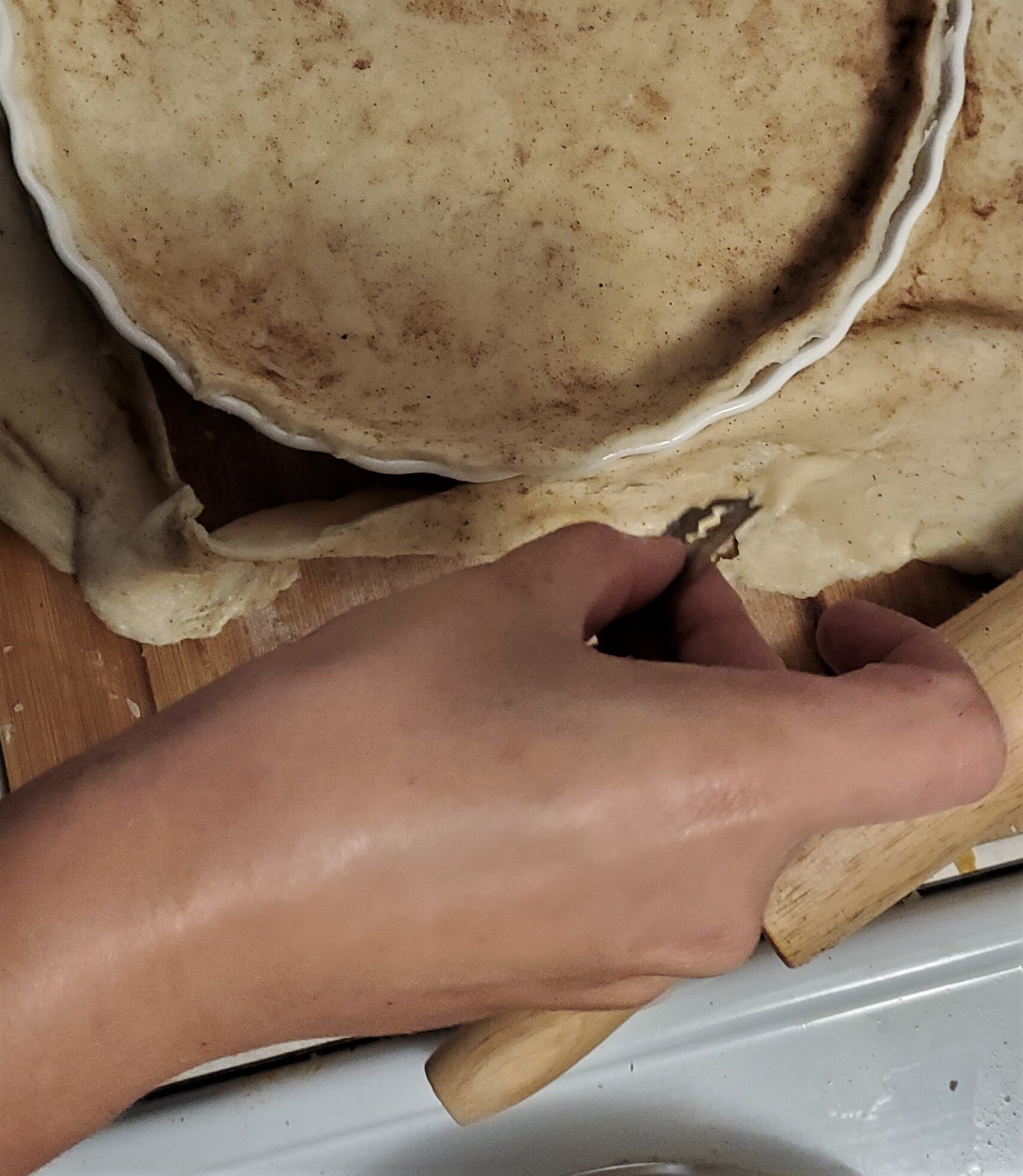 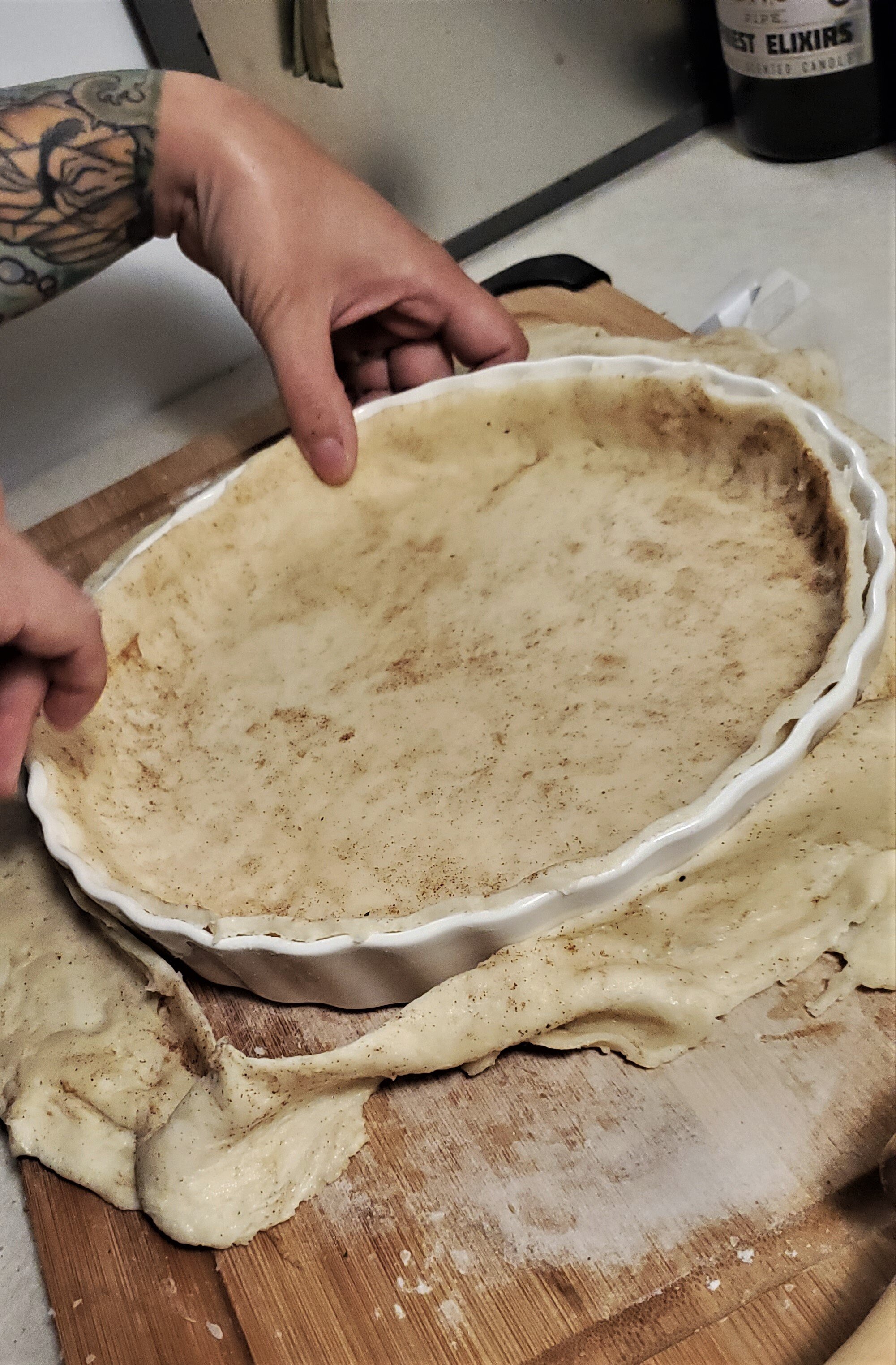 I took the excess dough and rolled it out then placed it in the fridge to firm up. This is helpful for doing any kind of fancy work for the top of pies.

Combine pumpkin, icing sugar and just a splash of whipping cream and set aside.
Whip the rest of the whipping cream until soft peaks form, continue to whip and add pumpkin mixture slowly. Stop once combined, place in piping bag and set in fridge until needed.

Building a sandworm out of pastry dough.

I started to build myself a base out of cardboard to build my sand worm on but realized it was way harder than necessary so I switched to tin foil. It was much easier turning the foil into a shape that would work.

I took my rolled-out pastry out of the fridge and started to lay it on in strips. Once it was built I baked it at 325f for 15 minutes, then let it cool completely before poking at it. 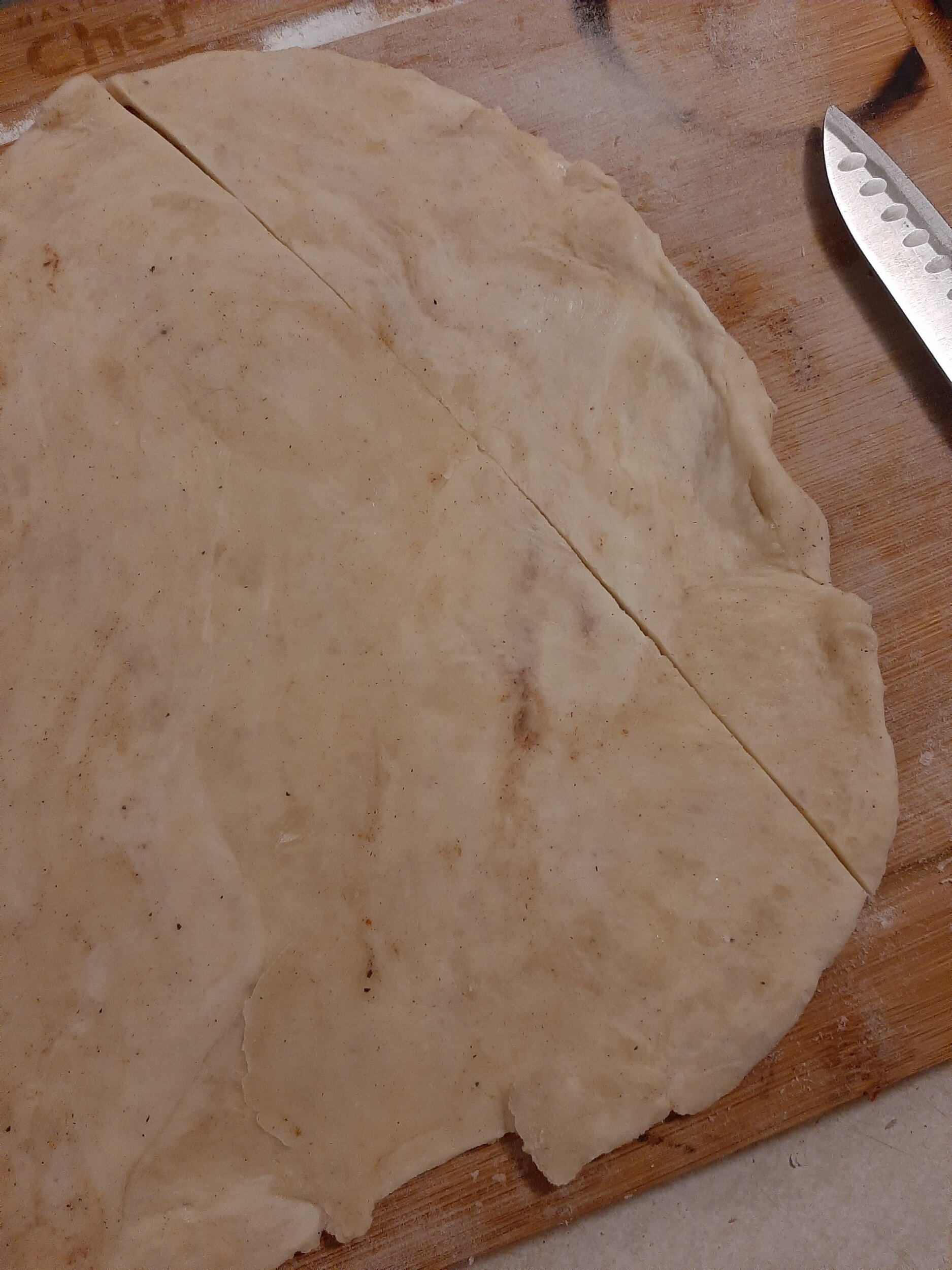 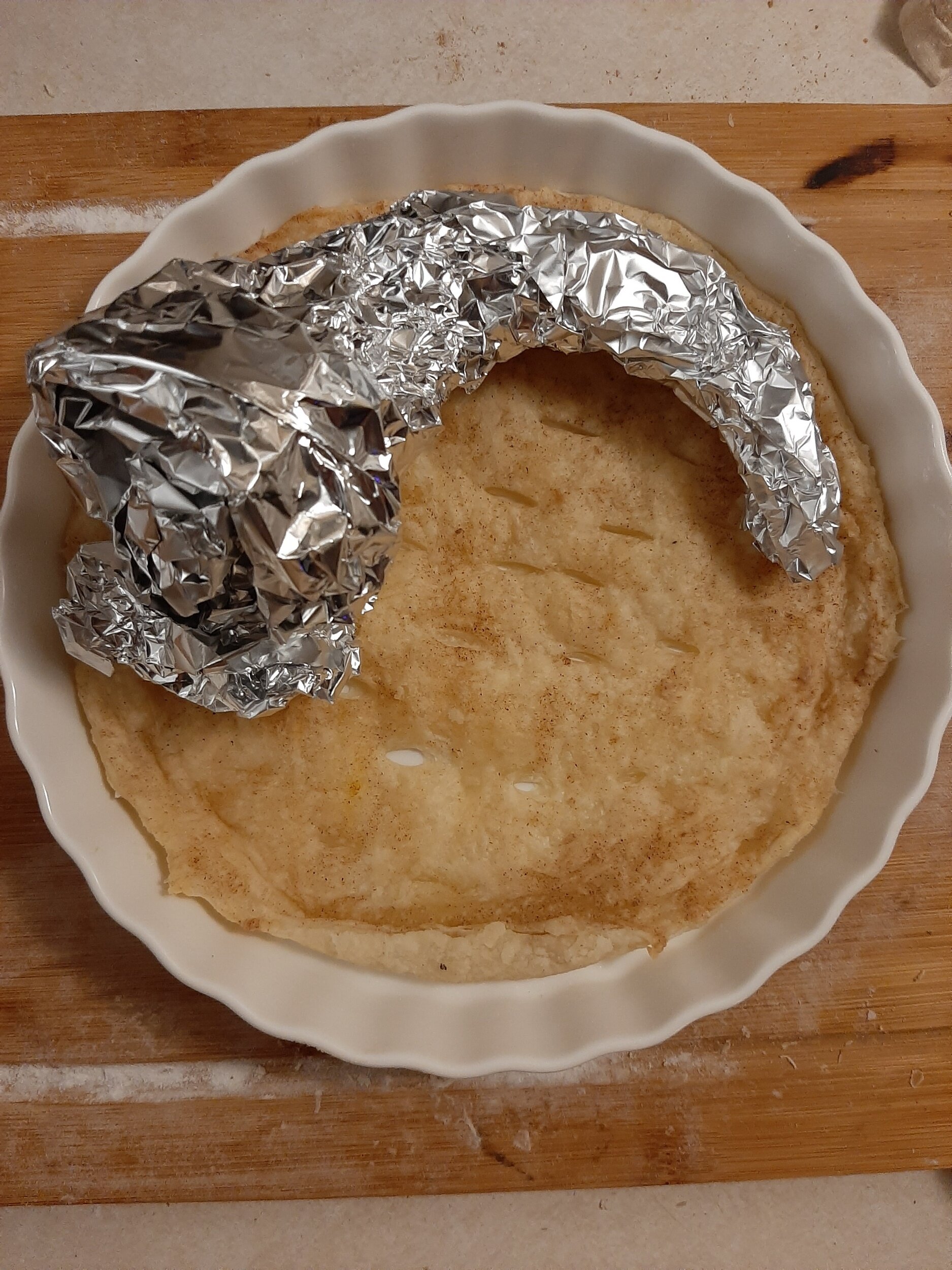 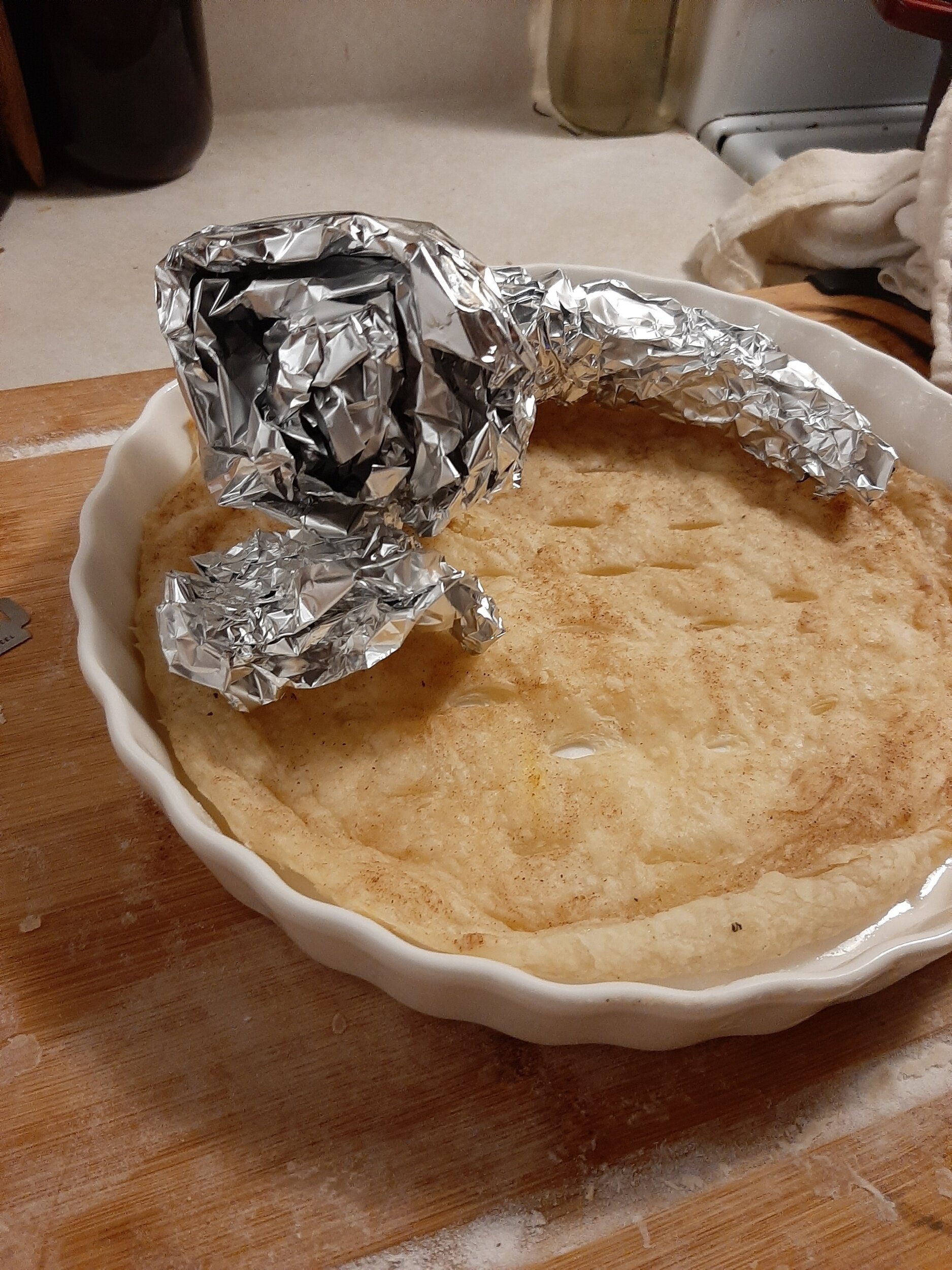 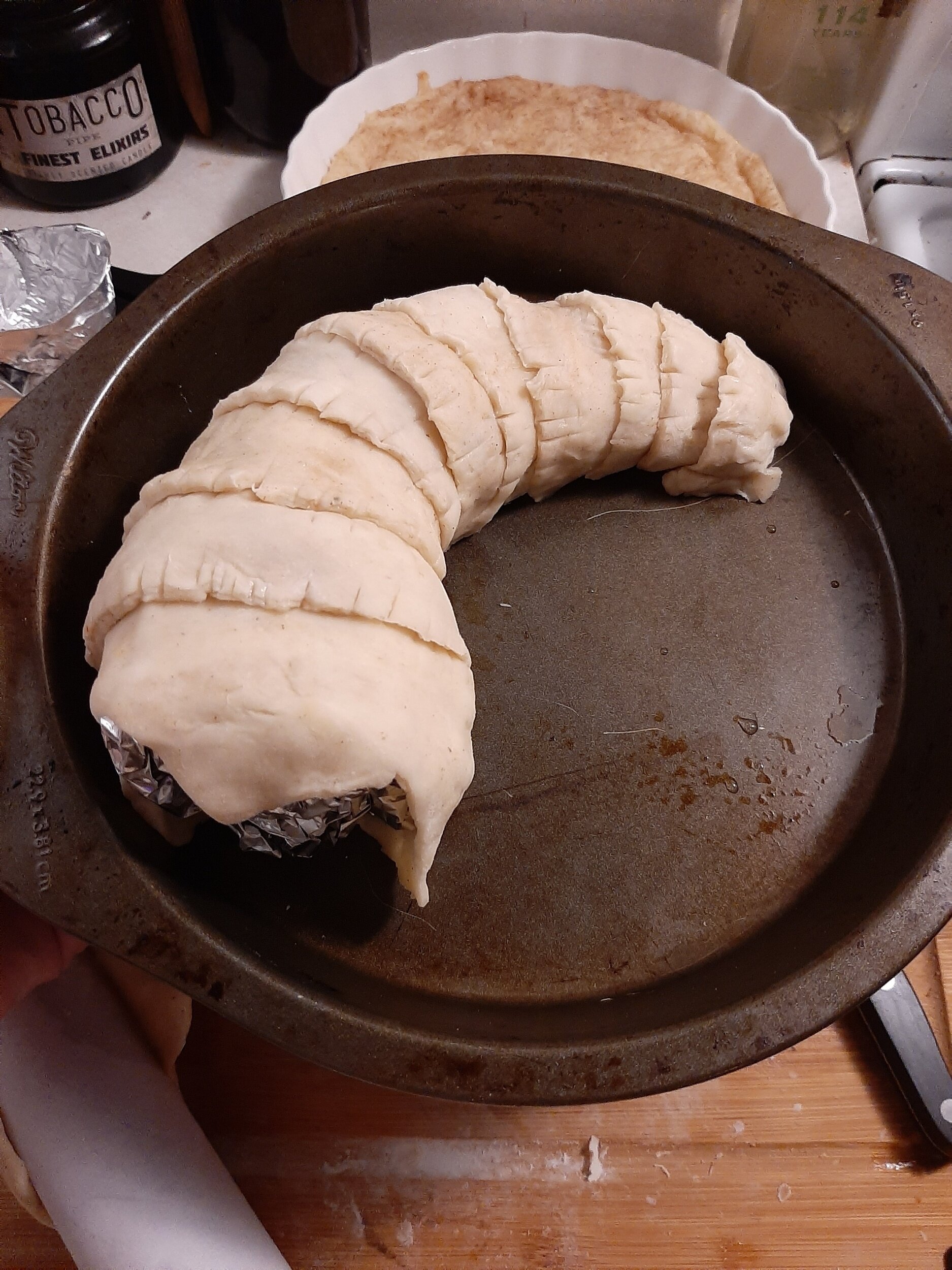 Once it was completely cooled, I very carefully separated out the foil. I had to take the worm apart slightly to do this, however it was easy to do due to the layered structure.

Once the tart was baked, and while it was still hot, I rebuilt the sand worm. I gently pressed it into the tart so it would appear as if it was emerging from the “sand”.

I set it aside to cool and made the pumpkin whipped cream. Once the pie was cool enough to handle, I filled the worm up with the whipped cream, smoothing out the seams of the layers on the worms’ body.

I sprinkled the tart with a mix of cinnamon, sugar and icing sugar to get a sand-like texture.

For the teeth and the writing I used a basic royal icing recipe. Royal icing is super simple, so simple in fact, I messed it up twice before sticking it in the fridge and deciding to do it in the morning. Sure enough, starting fresh the next day helped and I got it to work.

I have hundreds of hours of piping experience under me but using royal icing was a bit of a challenge. I wanted to use it because it would make great teeth, but its not the friendliest thing to write with. I’d much rather use a buttercream for that part.

Once I figured out the royal icing, I piped in the teeth and then took forever to decide what to write. “The spice must flow” was the obvious answer but I was worried it was too obvious.

Here is my completed spiced pumpkin sandworm tart. Inspired, of course, by Frank Herbert’s Dune, and pumpkins. I hope you like him, it’s quite tasty and, now that this blog post is complete, I am going to make myself a coffee with the extra pumpkin whipping cream and have a slice.

I highly suggest playing around the next time you make a pie or tart or anything, really. I am not suggesting everyone build a sandworm from pastry dough but just try something, it’s a lot of fun and the worst case result is still edible, so give it a try. Let your imagination run wild, but just remember to walk without rhythm.