Reupholstering this toddler chair was a really cool process. I’m hoping it inspires you to tackle the jobs you want to do but something is holding you back.

This project was done earlier last year. It was something I wanted to do for a long long time but it took me forever to get started. Having never done anything like it I was anxious about getting started. Once I finally did I managed to get the whole thing done in 3 days.

The life of a toddler chair

This chair has served us well through multiple kids and pets and it shows. It was at the point where wiping it down no longer did any good and the foam inside the arms had fallen away from being washed more times than it liked.

We toyed with the idea of simply buying a new one but not only was I not really willing to put out the money again but we couldn’t find them anymore.

After all this was much cheaper and nicer when finished.

I used muslin fabric because I knew I wanted to paint it, if I wasn’t going to I would have gone for something tougher and more colourful. Muslin is very inexpensive but it’s thin, the acrylic paint adds material to it making it more robust.

The first step once getting started was to take out apart. This part was not fun.

It was messy, it was gross and prying out all those staples wasn’t easy. I didn’t take any pictures of this part once I got started, my only goal was get it finished and cleaned up. The back of the chair had to be taken off to remove the fabric and foam, which was held on with 4 screws. Prior to getting to this point I was concerned that, with the way the chair was constructed, I wouldn’t be able to reupholster it at all but once discovering this I could see exactly how to do it. 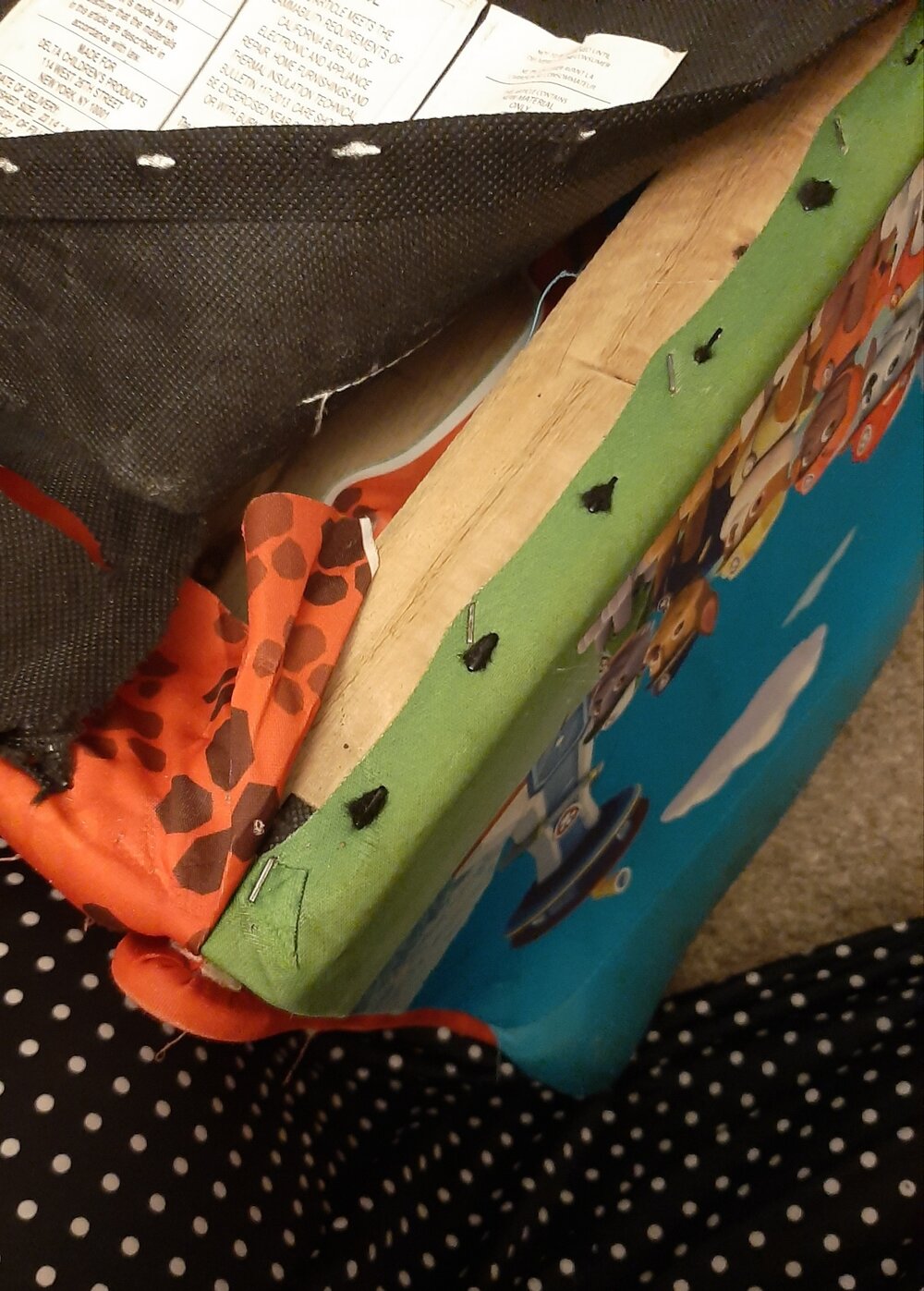 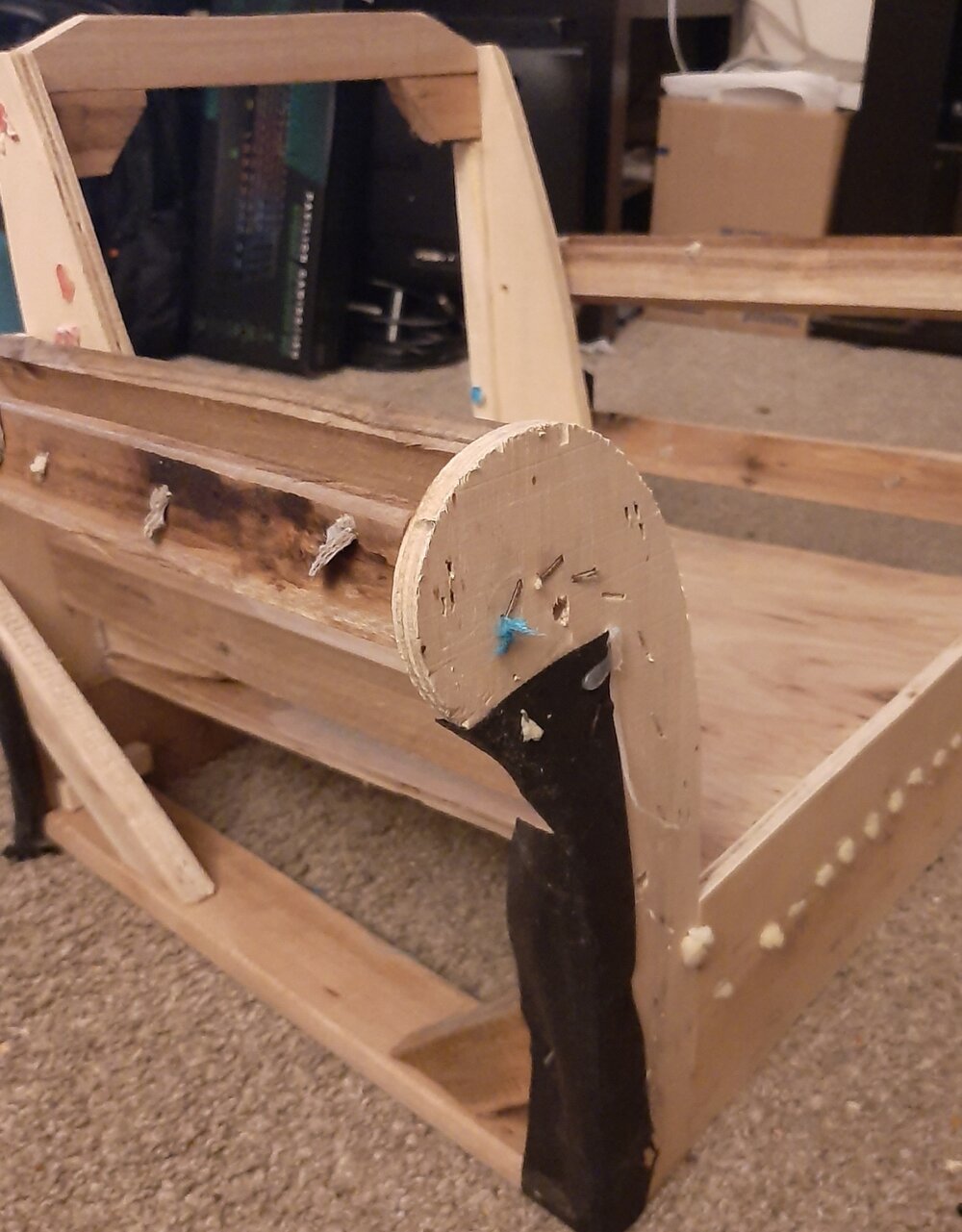 I saved the front pieces off the arms to reuse but the plastic screws attaching them were one time use so I’d eventually use regular screws and just paint over them, not as clean of a look but it works.

Once the chair skeleton was exposed I cleaned it well and let it dry while I cleaned up all the garbage from tearing it apart.

I cut the foam pieces and the fabric as I went. Nothing was pre done since I wasn’t sure what shape and size I would need. I wasn’t able to save any of the original fabric pieces to use as a pattern and I don’t think I would have been able to remake it in the same way anyway.

Placing the foam and fabric

I started with the seat by cutting the foam to size and stapling the fabric down covering it then trimming away the rest. Then came the arms, part of the arm was reinforced with cardboard originally which I think is why it was falling apart so I didn’t make it the same. Instead I used a single piece of foam and wrapped it all the way around the arm. I placed the foam and the fabric then stapled them together next to the seat, then I wrapped the foam over top and around the arm and stapled it underneath. Then I pulled the fabric tight over it and all the way to the bottom of the chair and stapled it. I stapled the excess fabric around the sides taking extra care at the corners and the front since the runching of the fabric would be exposed when it was finished.

The back of the chair had to be done at the same time as the arms since the arms needed to have their upholstery on before the back went on but the back needed to be screwed in place before the arms were closed up.

I stapled on the foam and fabric on the front of it and neatly pulled the fabric around the sides and stapled it around the back. Then I made holes in the fabric and foam where the screws needed to go through and I reattached it to the base. 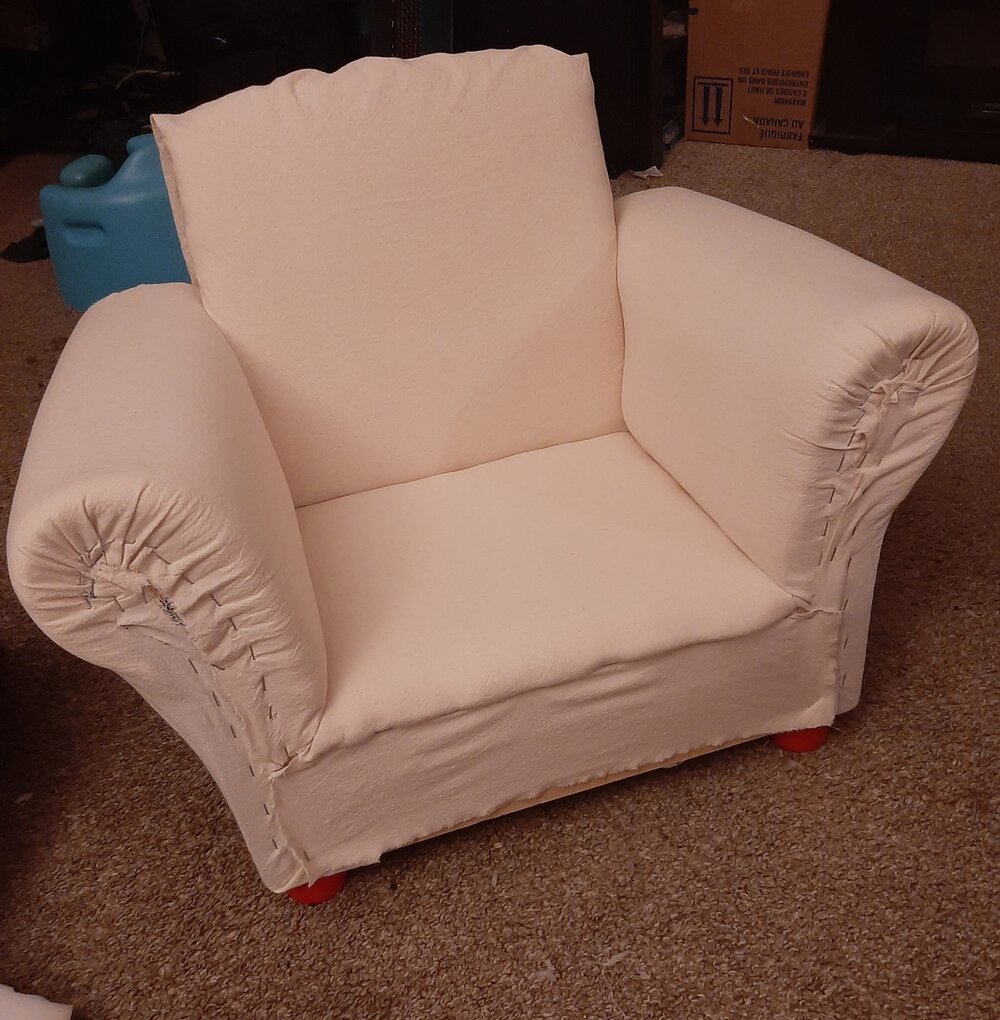 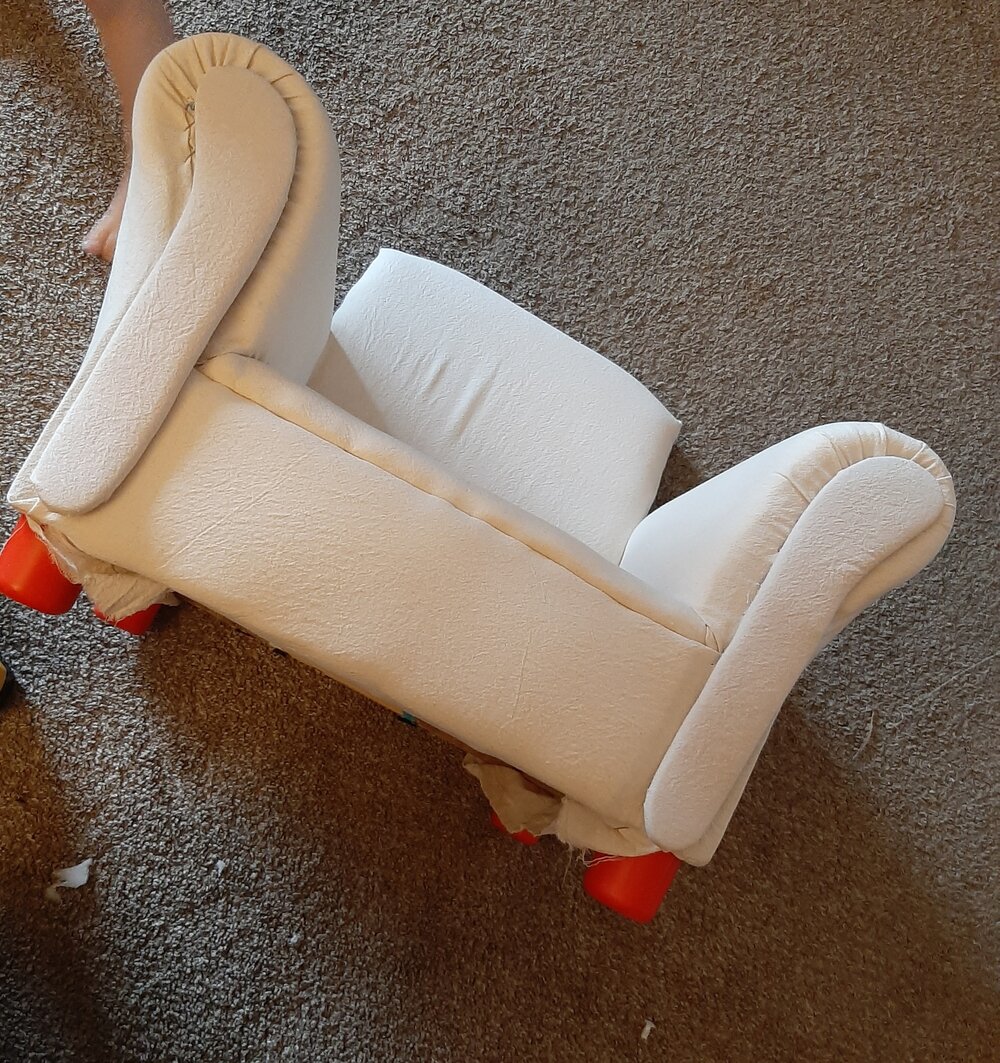 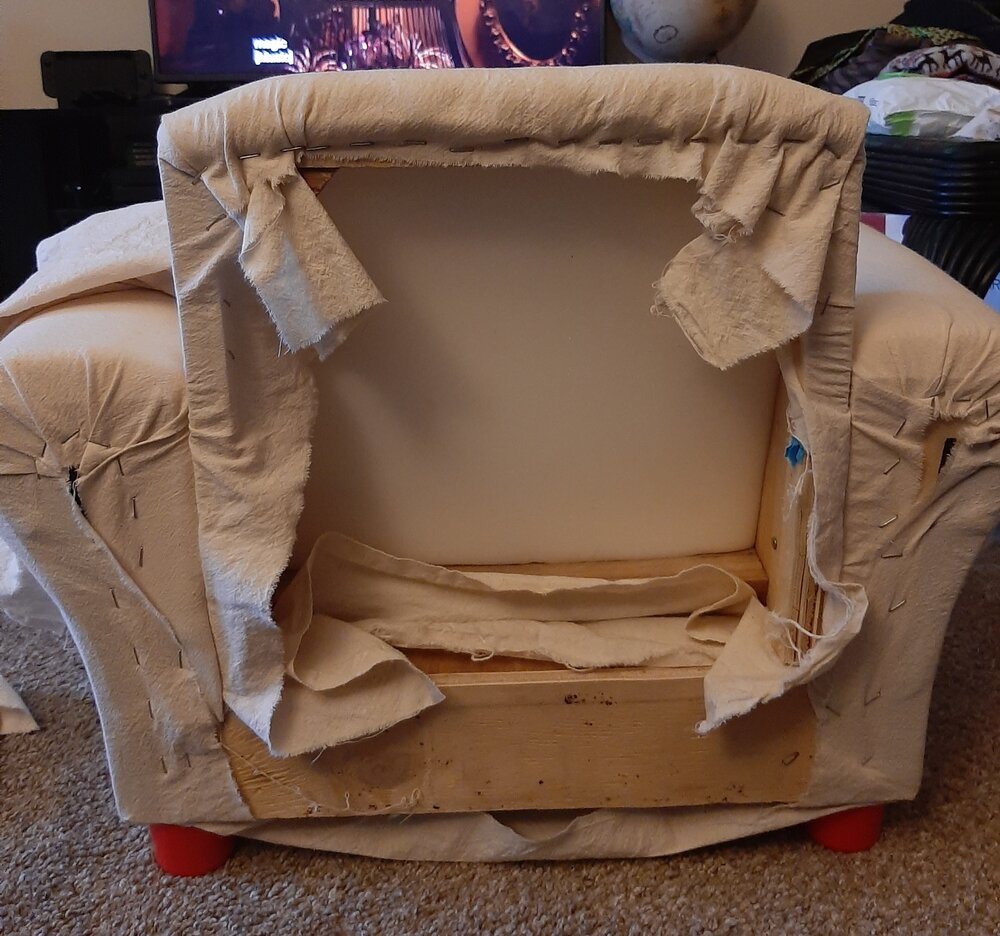 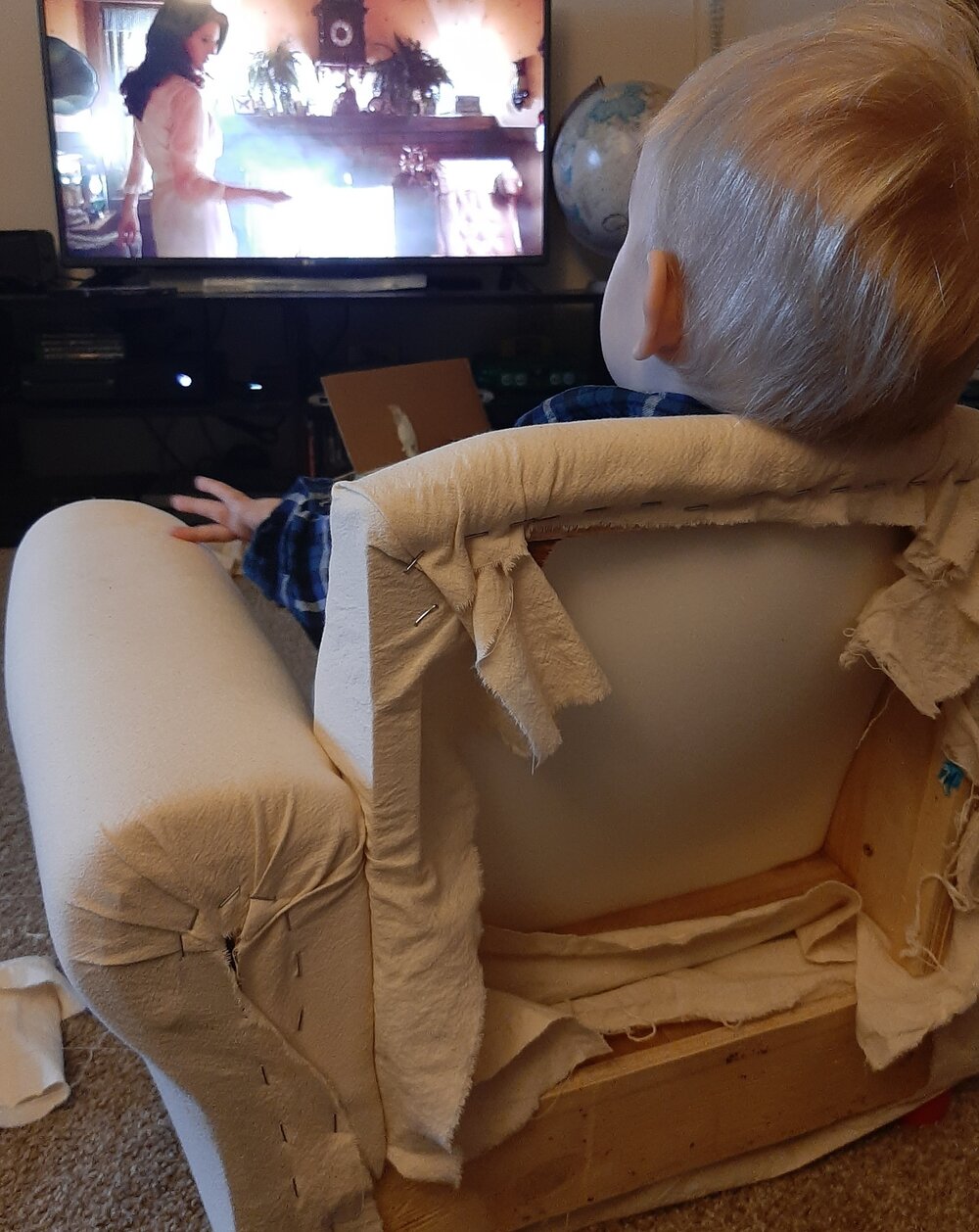 I stapled a thin piece of foam to the front to make base panel. This was about of a challenge to hide the staples but gave the whole thing a more professional look rather than leaving it off.

The front arm pieces I saved I simply covered the existing fabric with my new fabric. There just wasn’t enough to the pieces themselves without the fabric on them, I was worried it would fall apart. I screwed them in place and put a small amount of glue around some edges to prevent them from lifting up.

Sewing on the final panels

The next part was the most painstaking, time consuming yet the part I think I enjoyed the most. To finish the upholstery I needed to close up the back. To do this I cut three panels of fabric one for each arm and one for the center of the back. They had to be stitched on my hand while pulling it nice and tight and folding the edge down.

I pinned on the fabric first but it needed to be adjected as I went. I used a curved upholstery needle and sewed each panel on and stapled them under at the bottom. Then I sewed the final panel on the bottom and screwed on the legs. 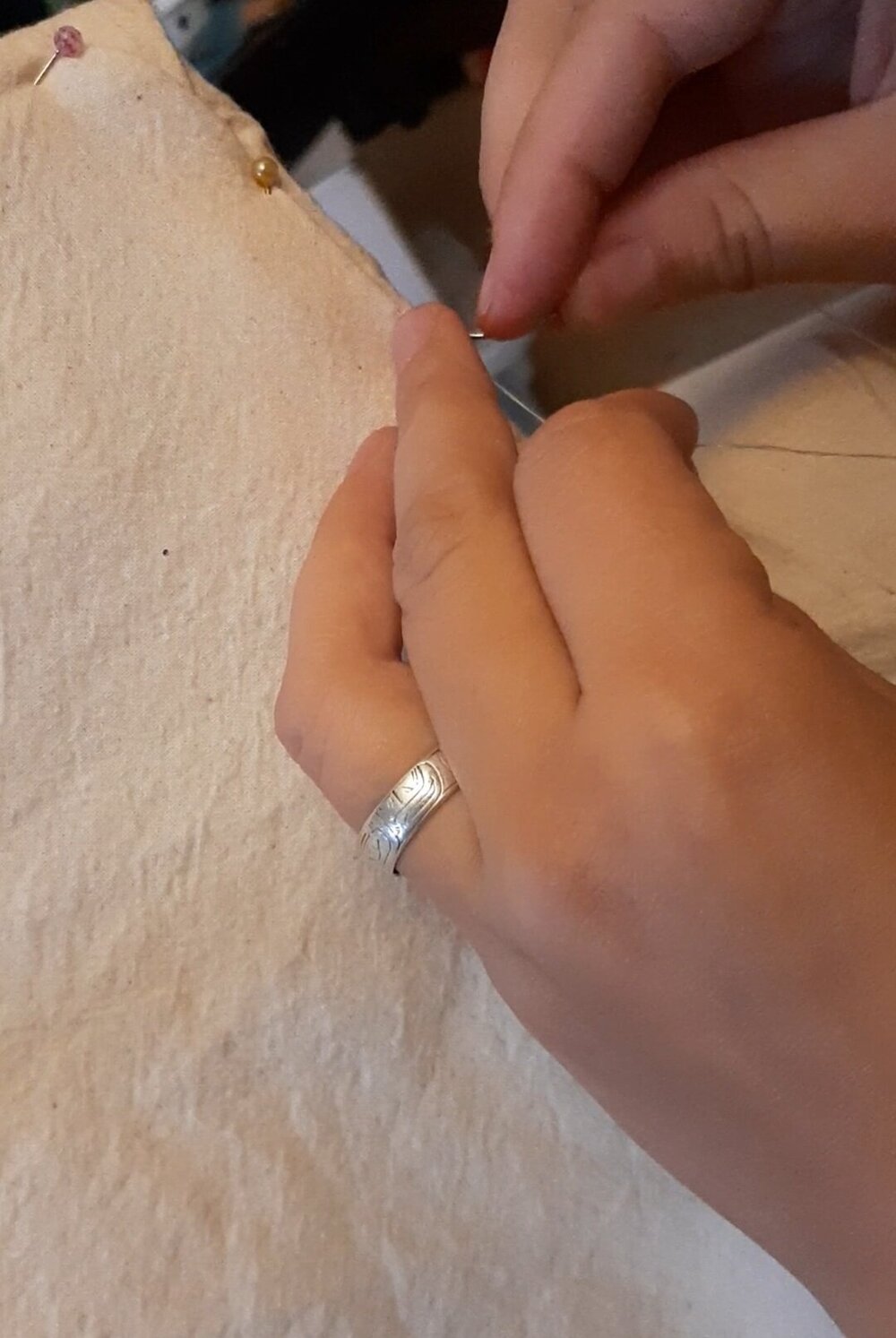 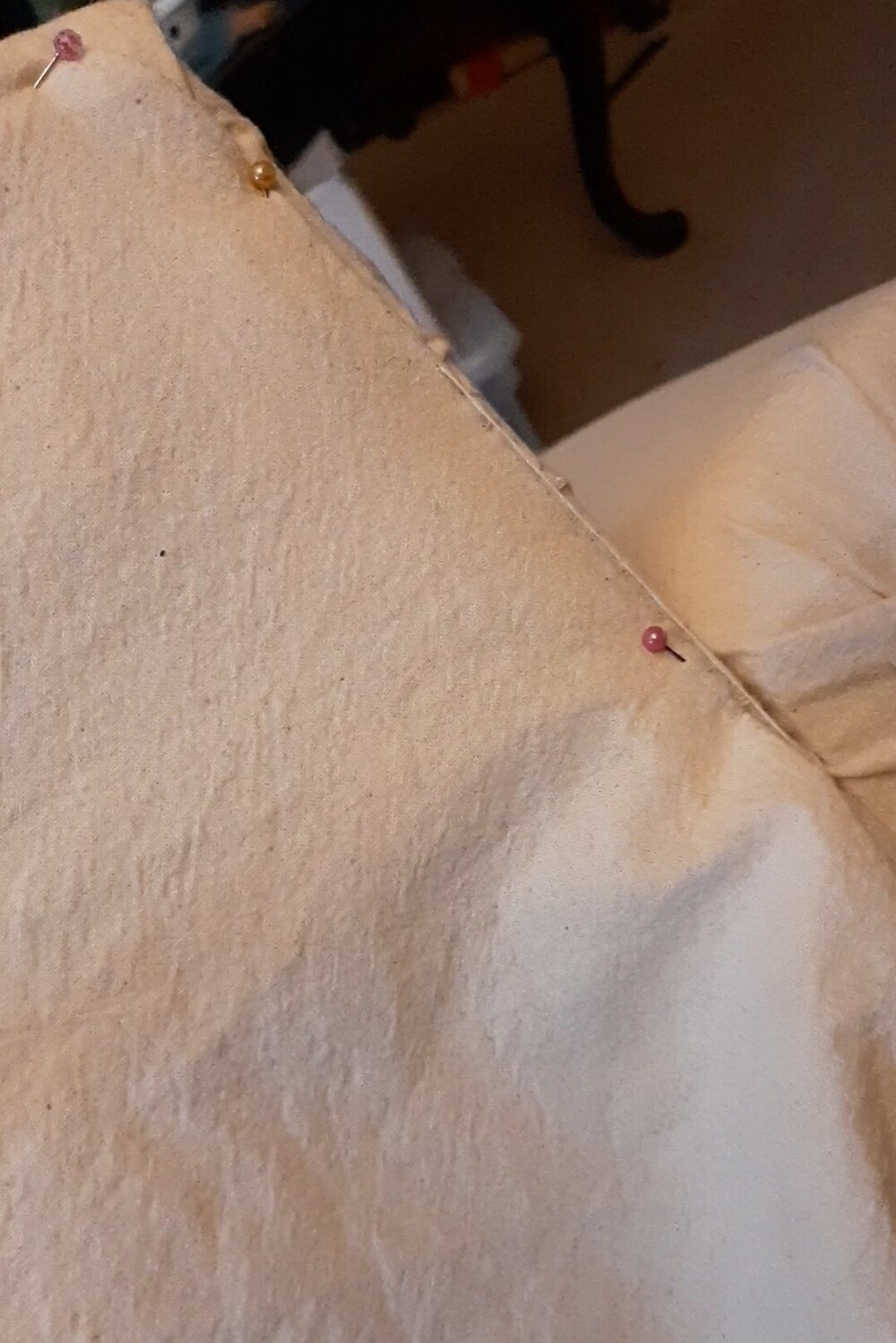 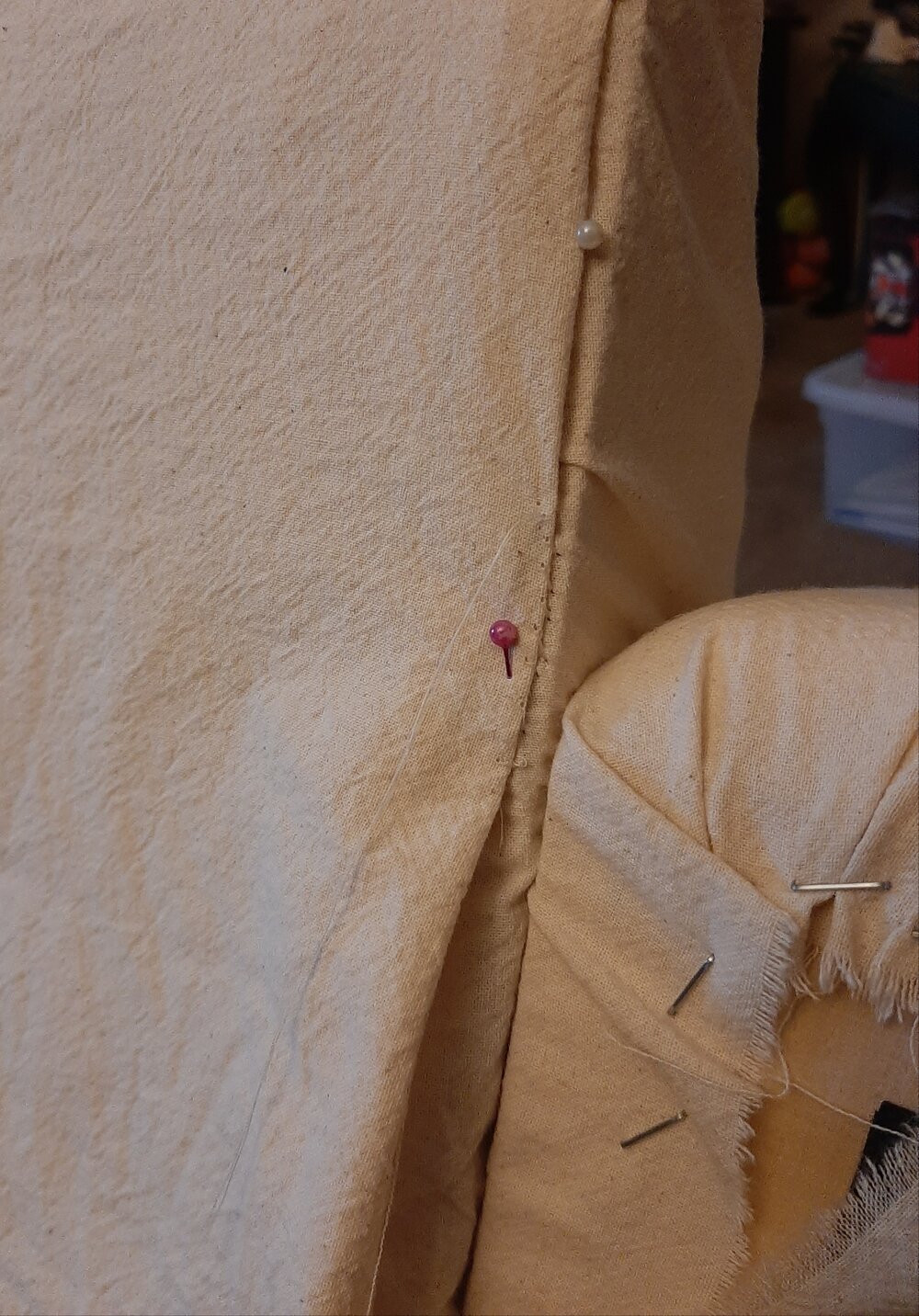 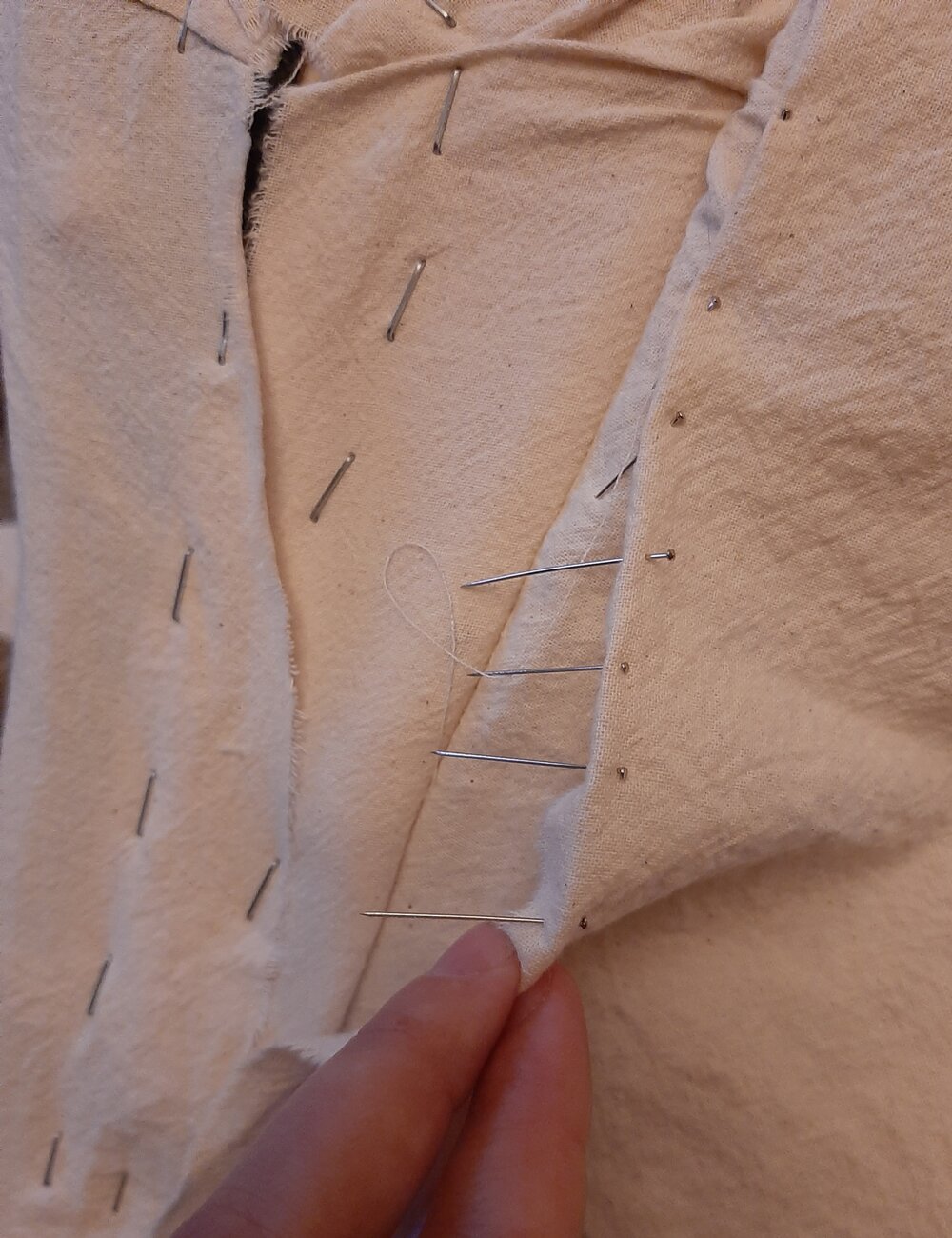 It looked really nice at this point and maybe if it wasn’t a seat for kids I could have left it but even before it was finished it was already covered in dirty handprints thanks to one particular small child. So next it was onto the painting.

I used acrylic paints mixed with an acrylic textile medium and it worked great. 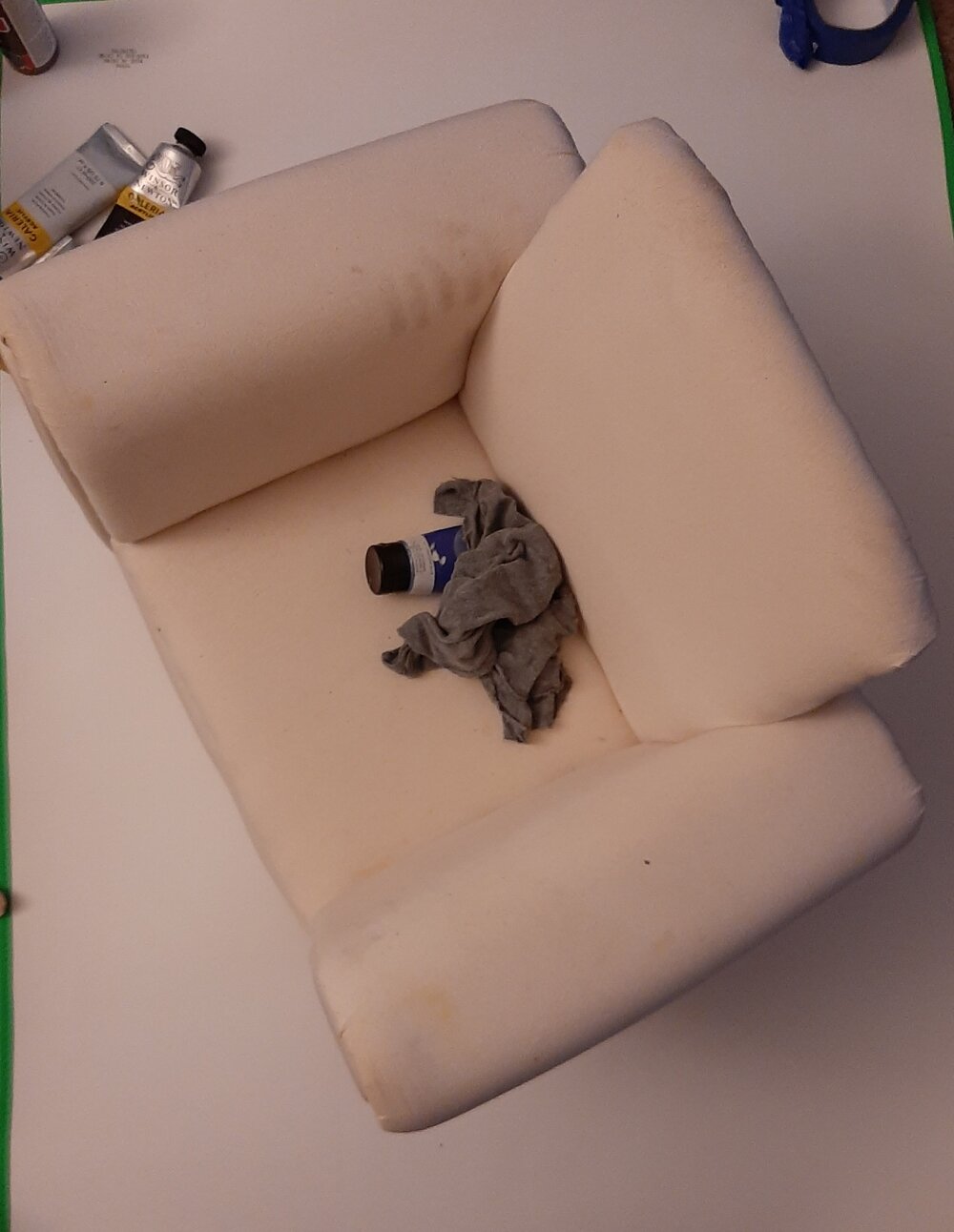 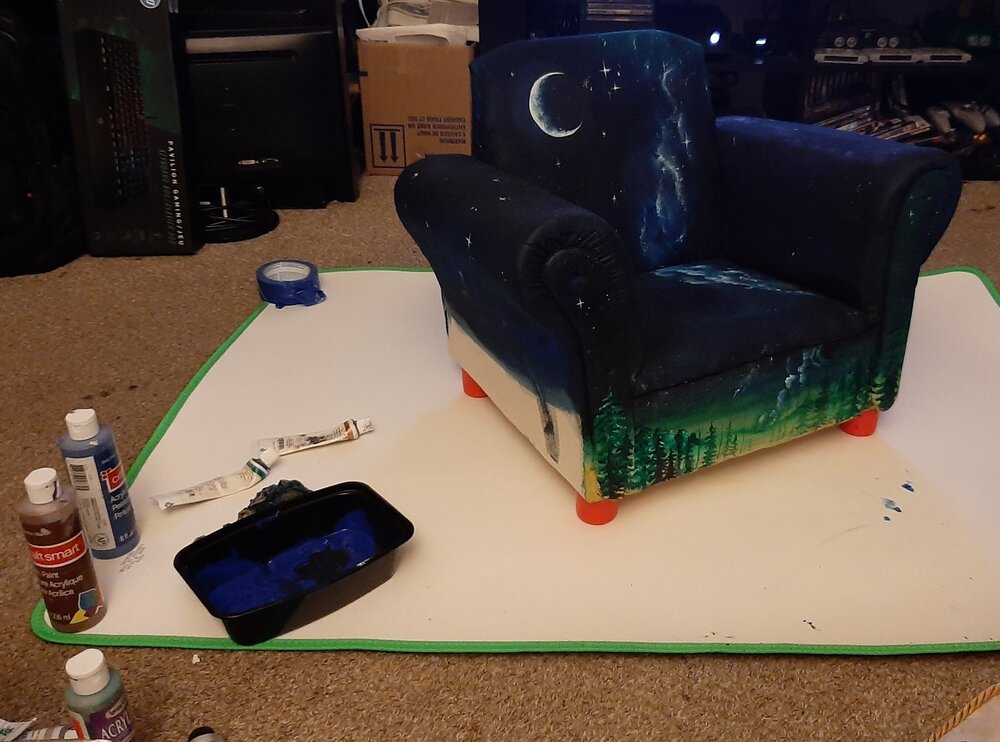 The medium helps not only make it permanent but it helps it blend and absorb into the fabric better.

I wanted an image that would work for all the kids something we could all enjoy. I wanted to stay away from any characters or things that would be grown out of and settled on a big night sky with trees around the base. The dark mottled colours would help hide the dirty prints and future food stains. To make it extra fun I even went over the moon and some stars with glow in the dark paint after it was done.

I was overjoyed with how this project turned out and 6 months later it still looks good. I had originally intended to spray it with a water resistant coating but I didn’t get to it prior to having to wipe it down. Turns out it is perfectly wipeable as is and cleans up much easier than the original. 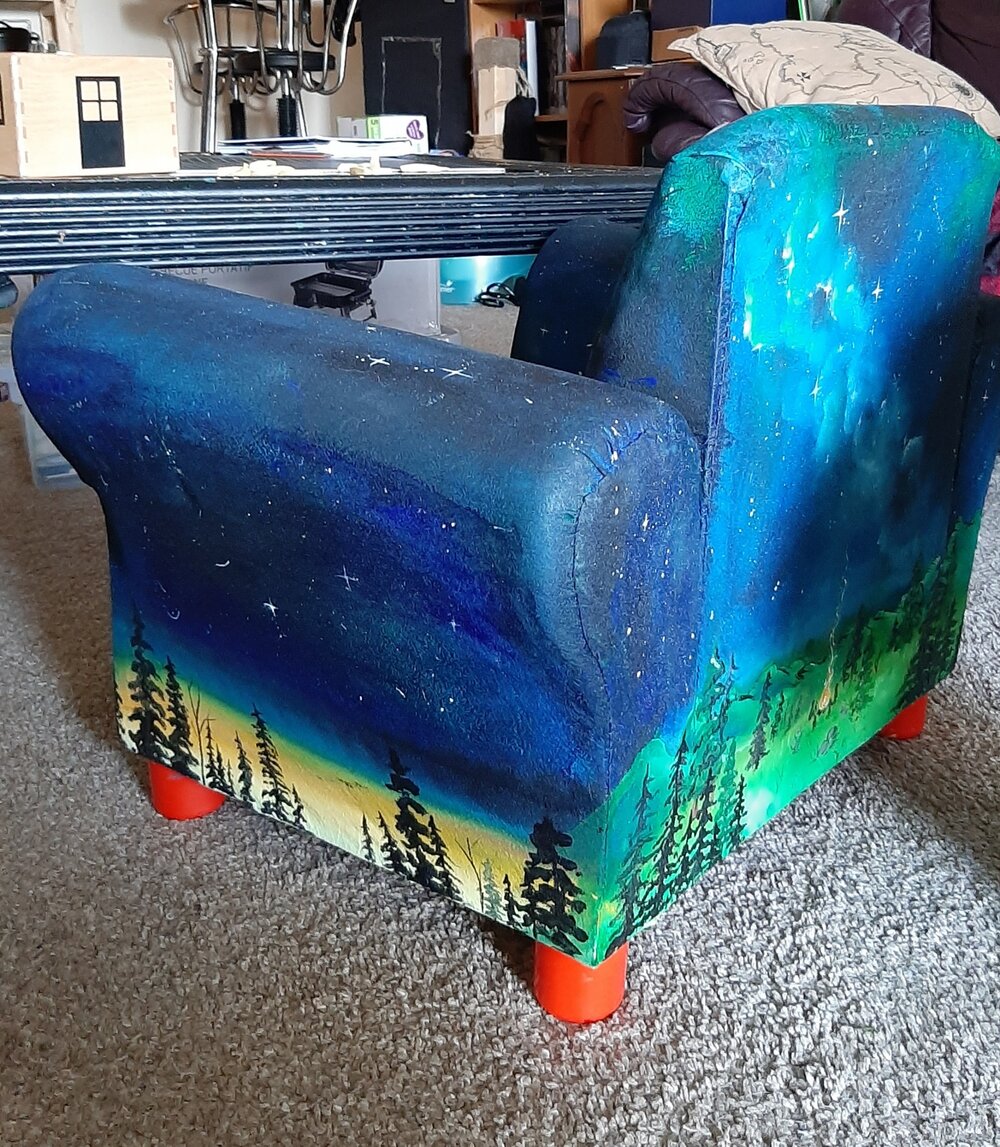 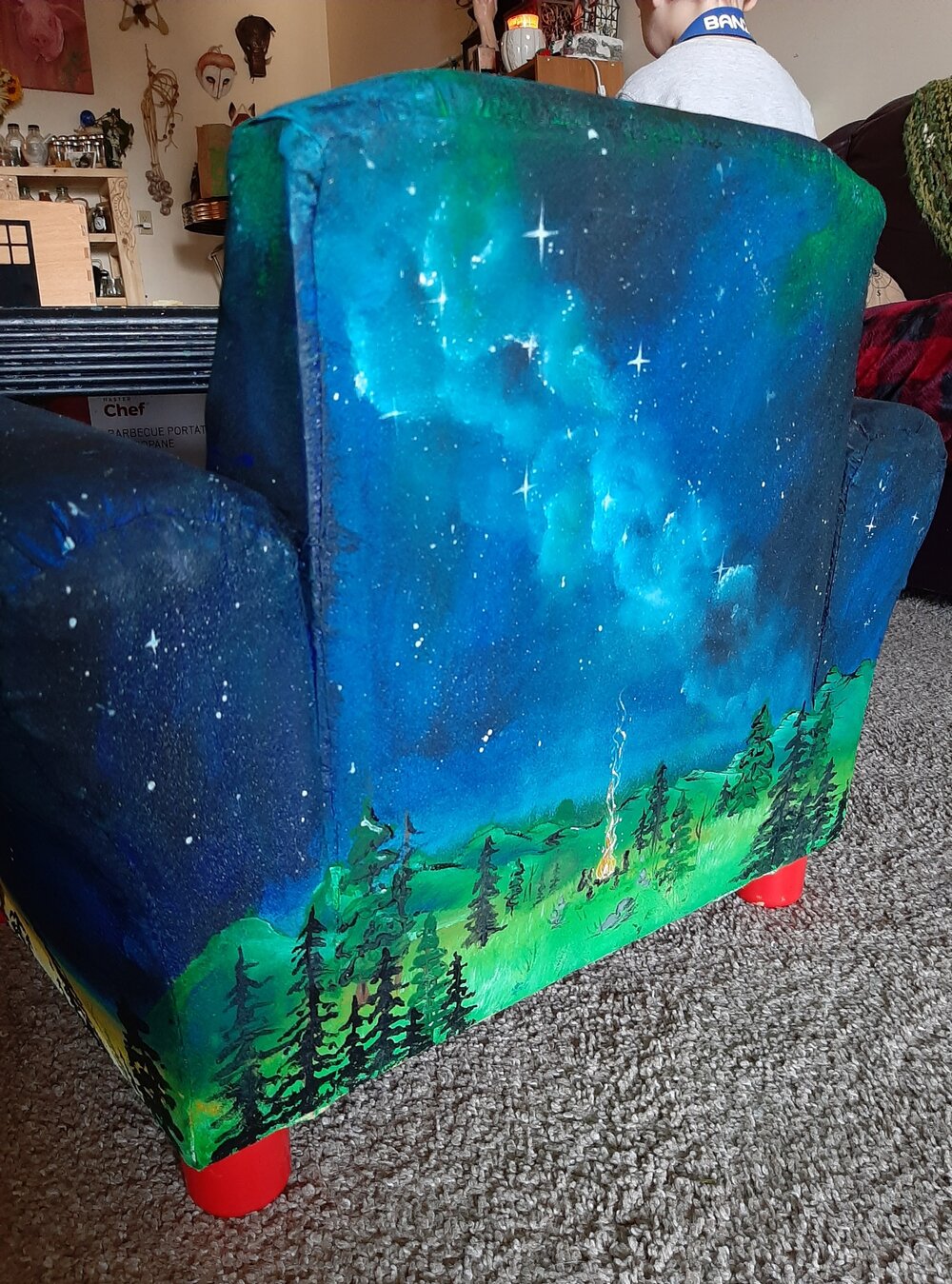