When I was a kid one of the most common treats my mom would make were rice krispie squares. They are so simple and inexpensive to make its no wonder parents opt for them so often. They also happen to be great for modeling and for creating big edible structure. They are lightweight yet ridged making them as perfect base for the more elaborate edible displays.

In this post I am using the rice krispies to make a 3D shape making things just a little more exciting.

My recipe is super simple like all rice crispy recipes are. This is a small batch tailored to this project. If I were going to make a pan of treats I would double the recipe. 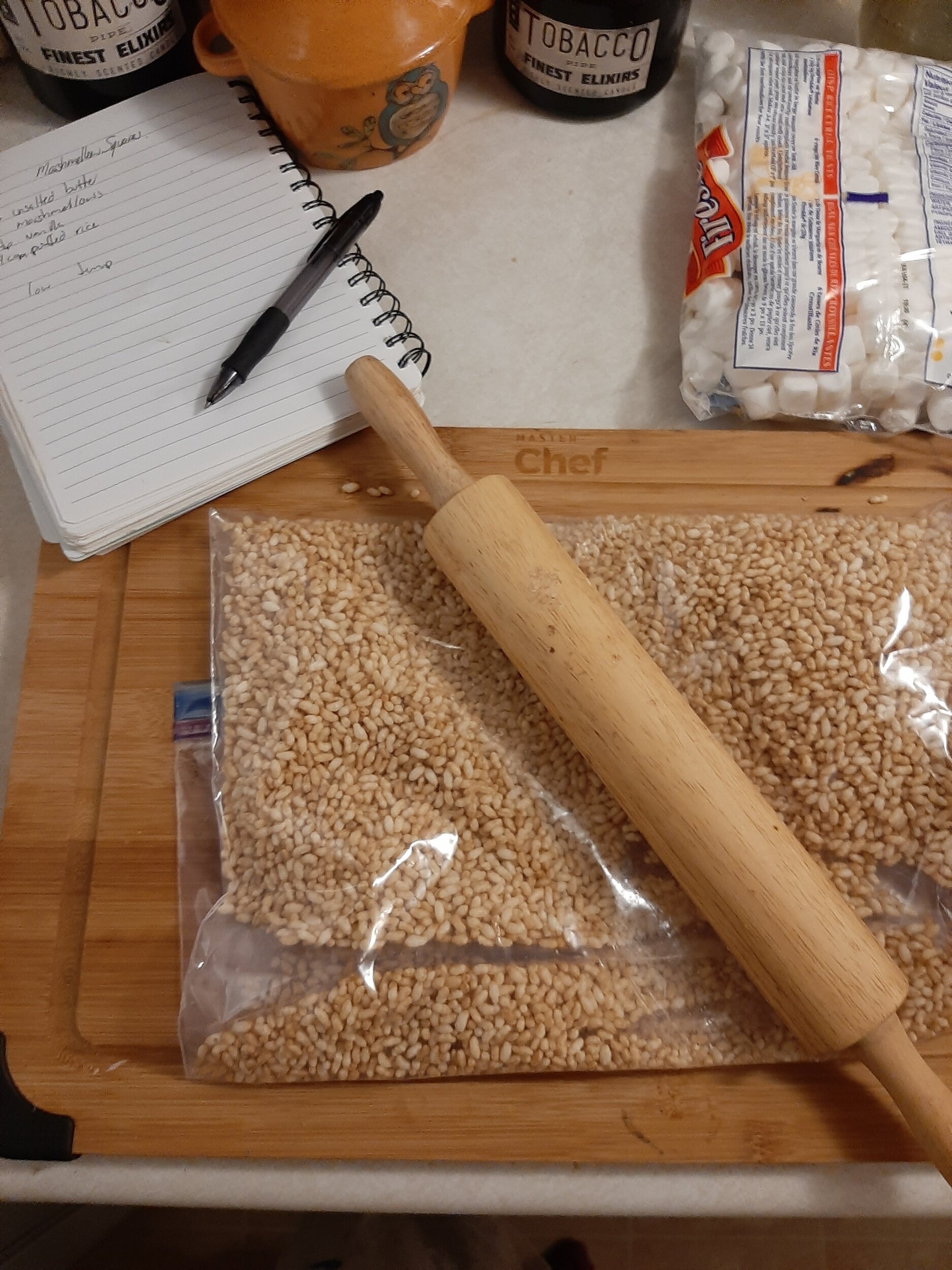 I used a rolling pin to slightly smash up the treats to have a varied and slightly smaller texture. 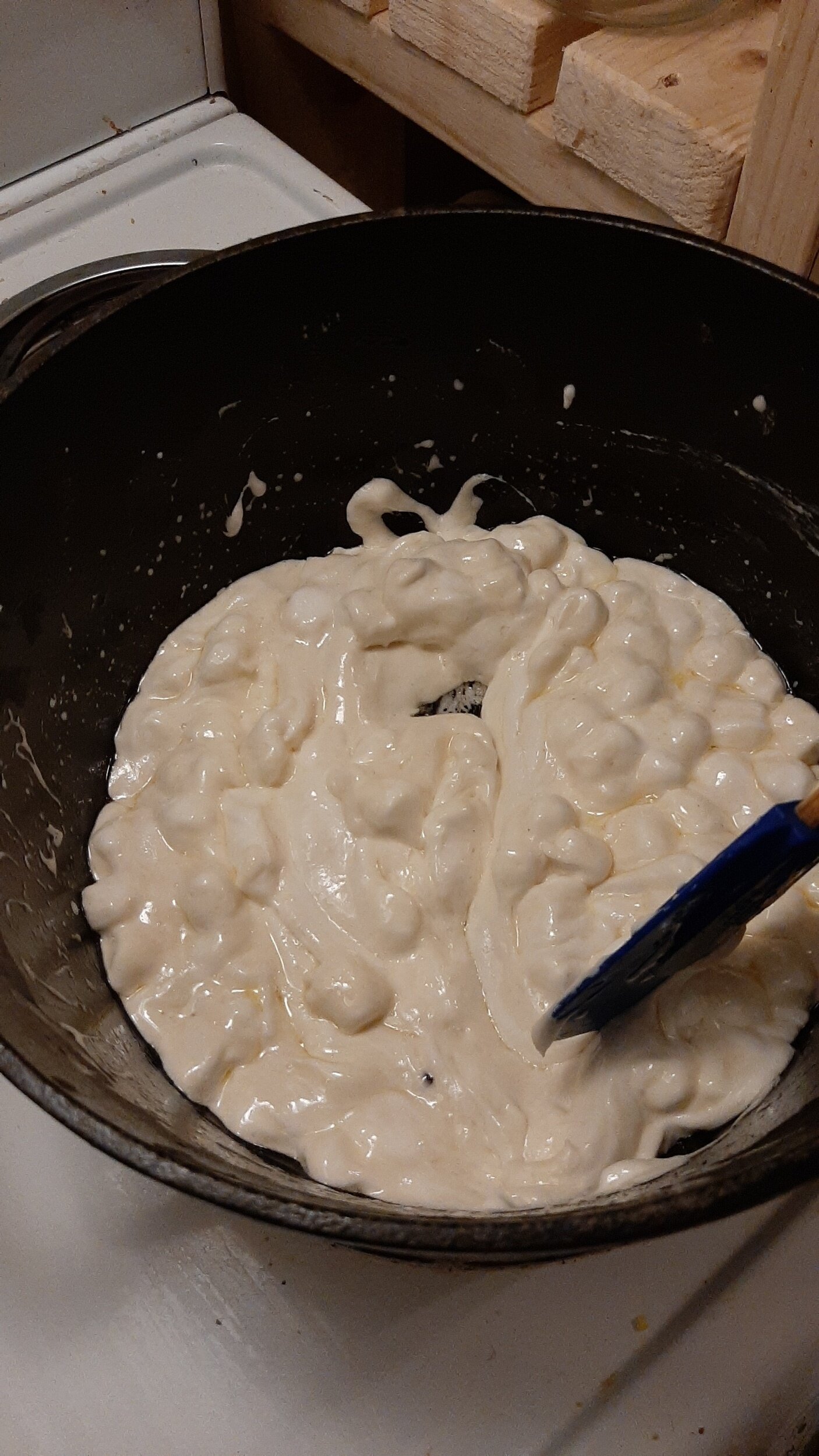 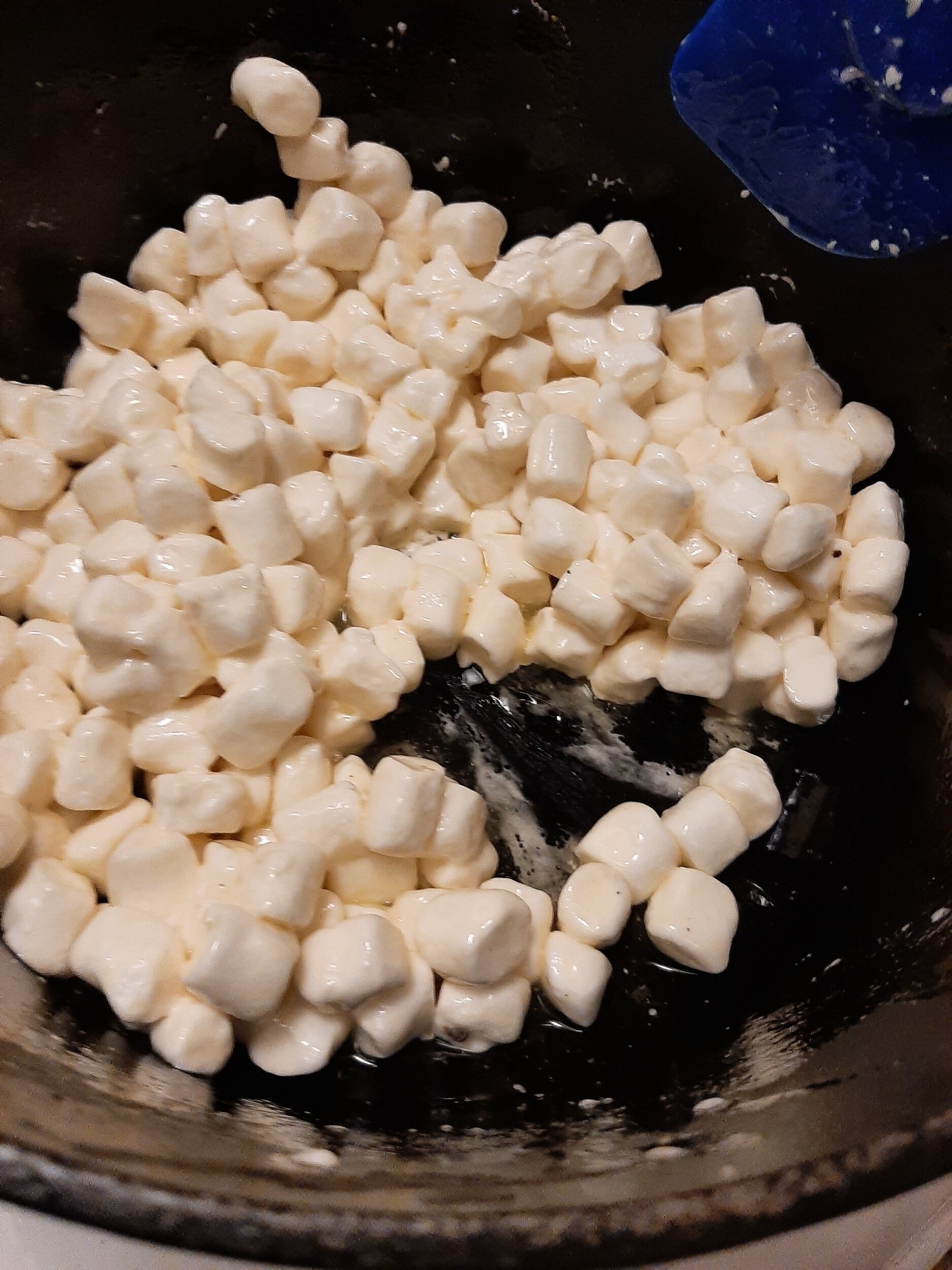 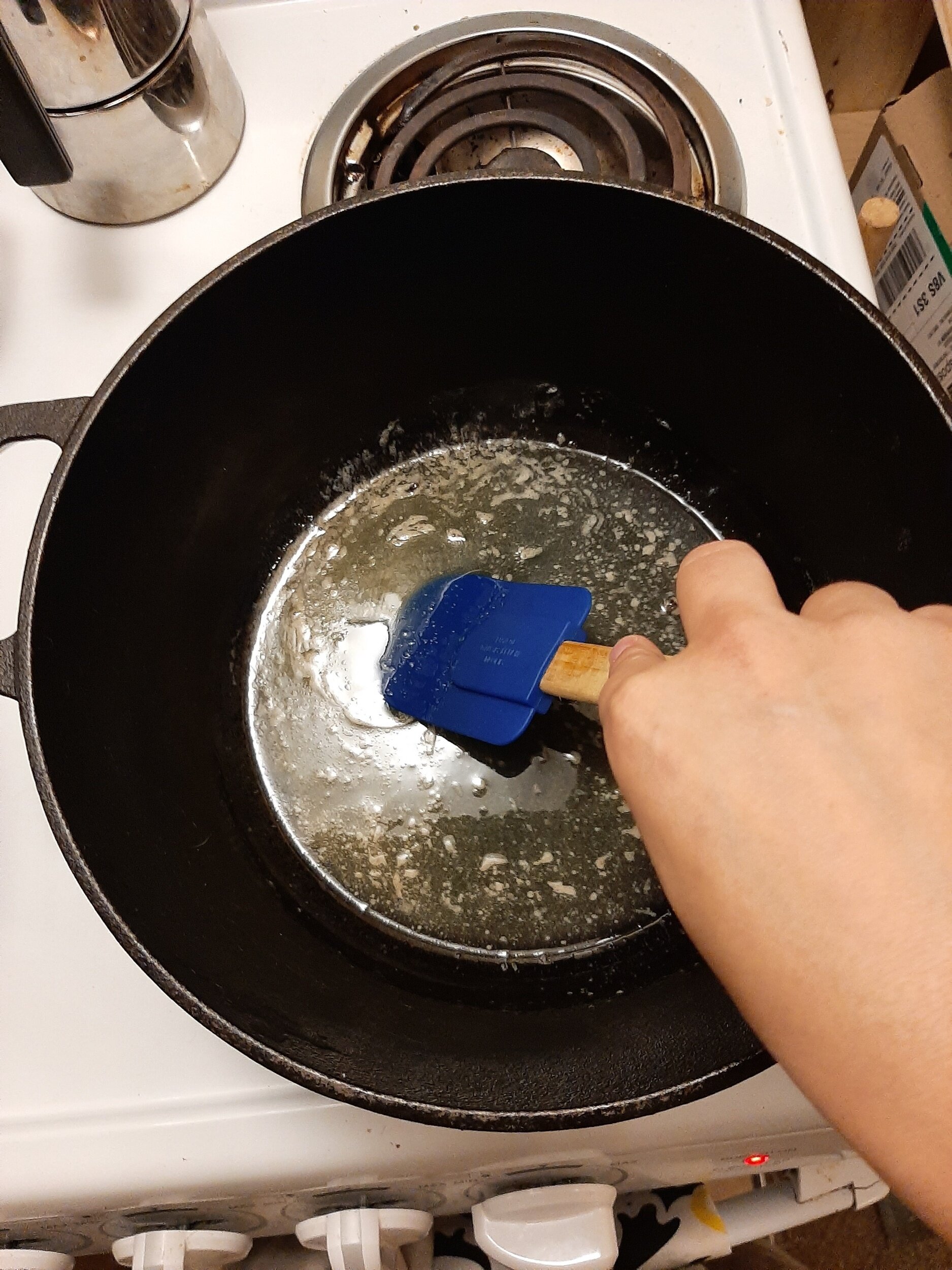 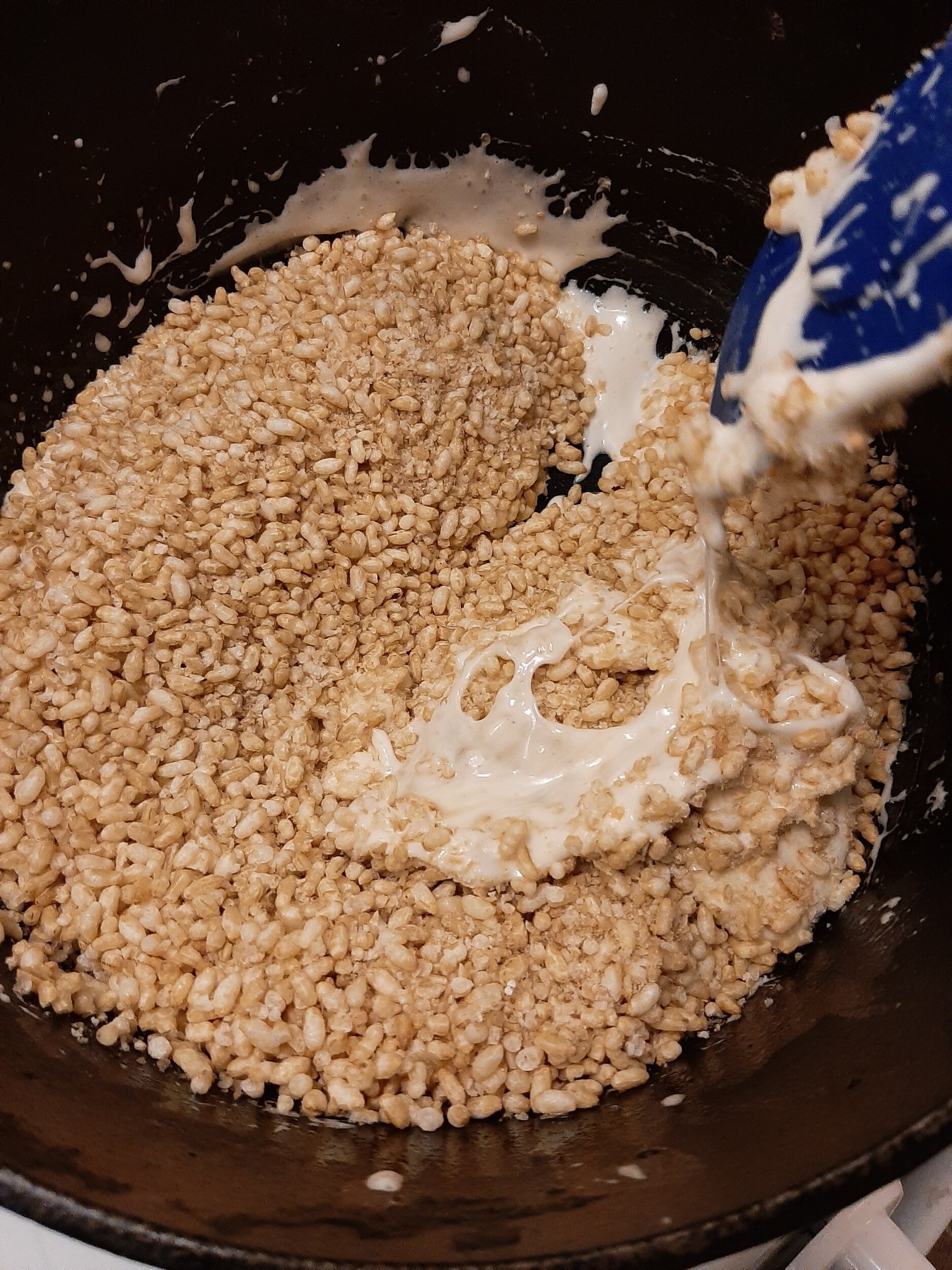 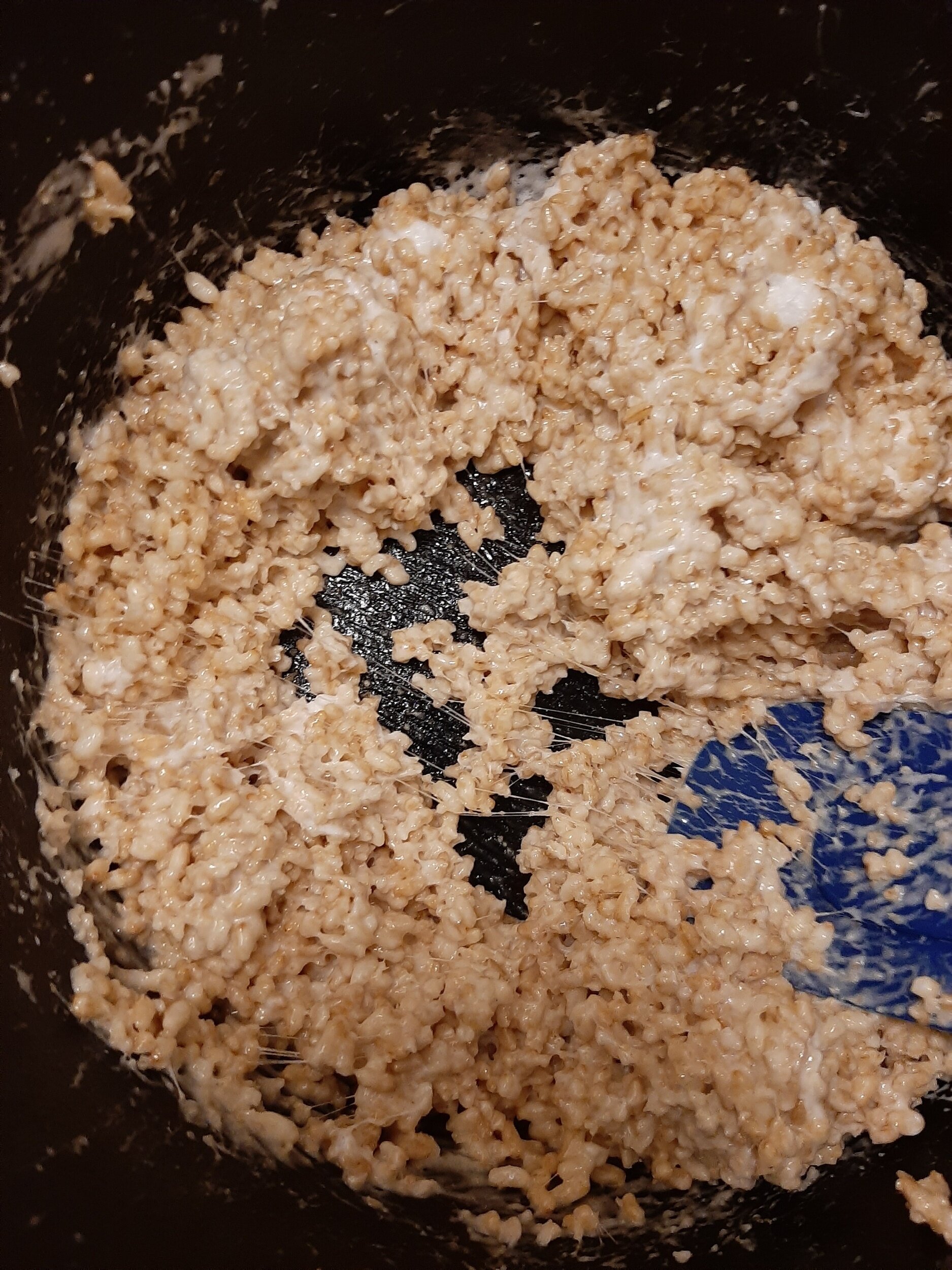 In my lovely cast iron Dutch oven (or any pot) on medium to low heat I melted my butter. Once the butter was melted I added the vanilla and half of my marshmallows. I stirred continuously until all the marshmallows where melted and added the rest, after a couple stirs I added my rice crispies, any puffed cereal would work, and stired until it was fully incorporated. Then I continued to stir until there were no more large marshmallow chunks remaining.

When the consistency was where I wanted it I scooped out everything in the pot onto my work surface, then let it sit for a couple minutes to start cooling. 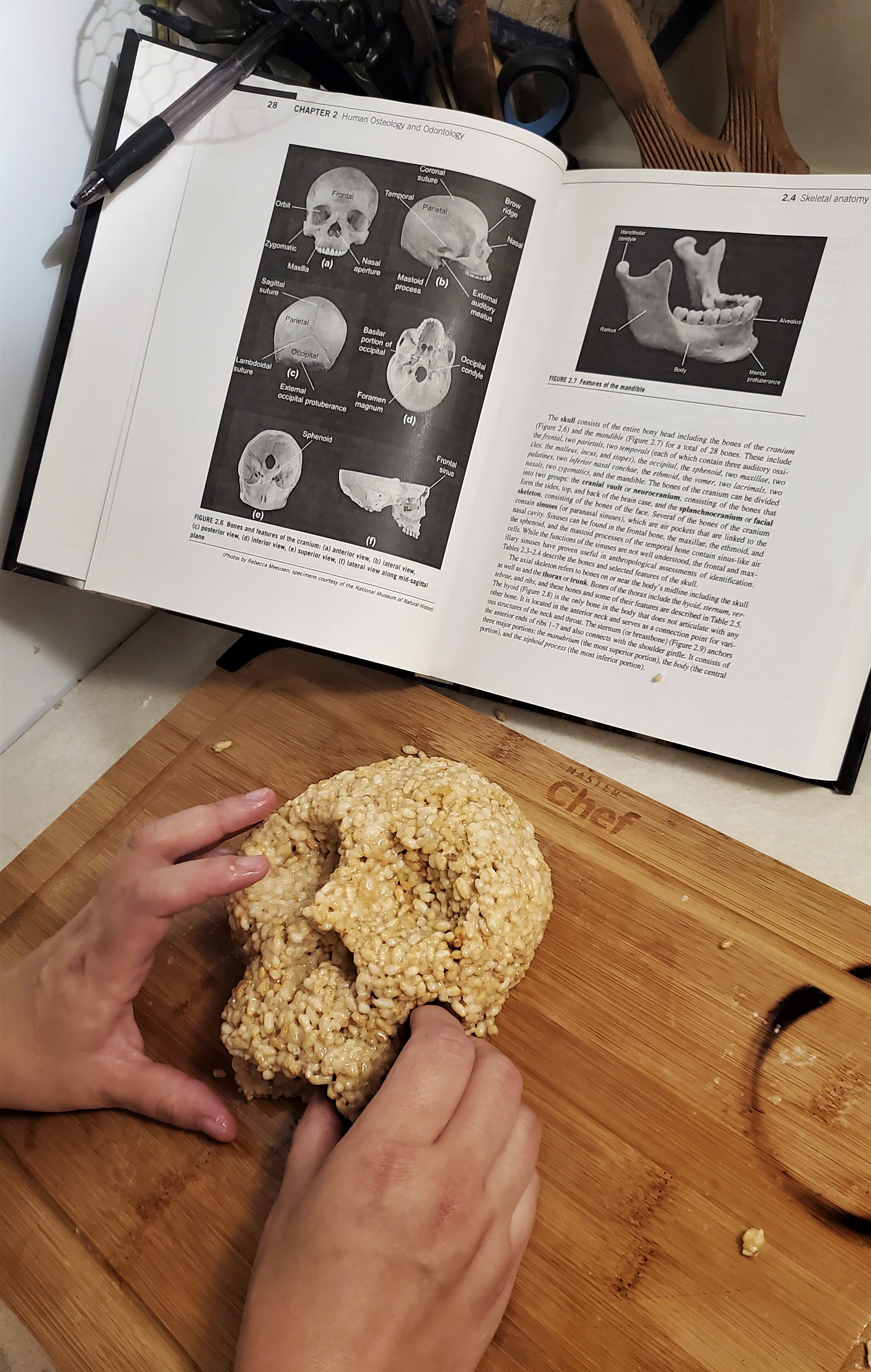 To bring it together I wet my hands thoroughly with water and compressed it all together. Working quickly I started to shape it into a skull. The warmer is is the less it’ll hold but if it gets too cool it’ll be too hard and won’t be as manipulatable. The window for the perfect modeling time is pretty short so you have to work pretty fast.

If it starts to stick to your hands just re-wet them.

I made my skull and set aside a small ball for my spider.

The next step was the chocolate. I used chocolate molding wafers for this part so I didn’t have to temper any chocolate.

Since it was such a small amount I just heat it up on low in a pan. For larger amounts I would set up a double boiler system. Doing it in a pan on direct heat works but you really have to watch your heat and can’t apply too much or it will quickly burn. Once my chocolate was melted I let it sit for a minute to cool slightly then I rolled the spider ball in it and put the rest of the chocolate in a piping bag.

At first the bag was too hot for prolonged contact so I wrapped the piping bag in a towel and started on my spider web.

On a piece of folded up tin foil I drew out my spiders legs plus extras for the inevitable breakage that will happen, then I put it in the freezer to set.

I decided pretty last minute that my skull wanted teeth. There are a number of things I could use but I had a bag of rock candy beside me with a particularly toothy looking stone. I poured the bag in a bowl and searched for the perfect shapes.

When I was ready to apply them I took a butter knife and made an indentation where they would go. I used the chocolate to glue them in so I had to hold them each for quite a while for them to set in place. 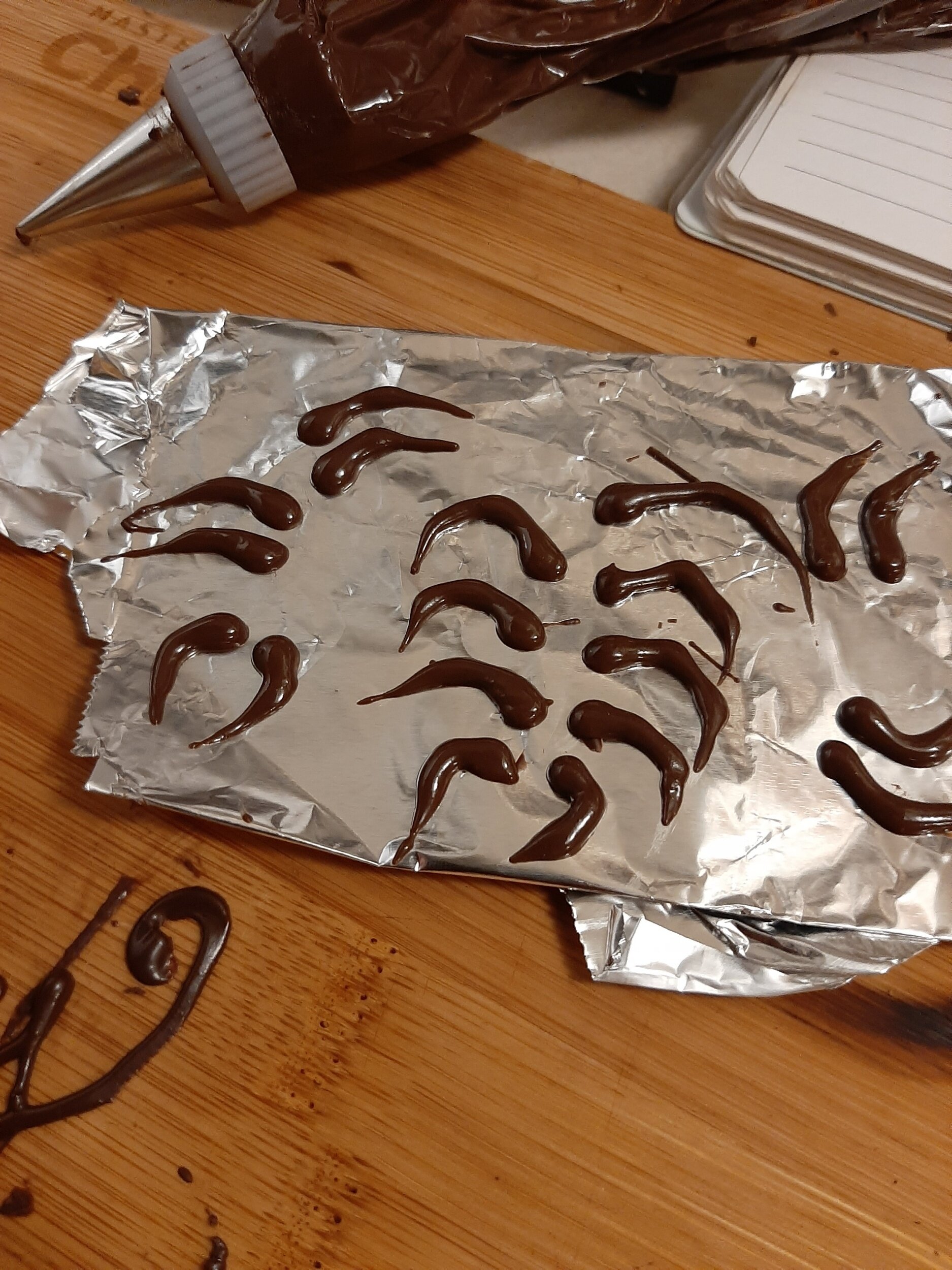 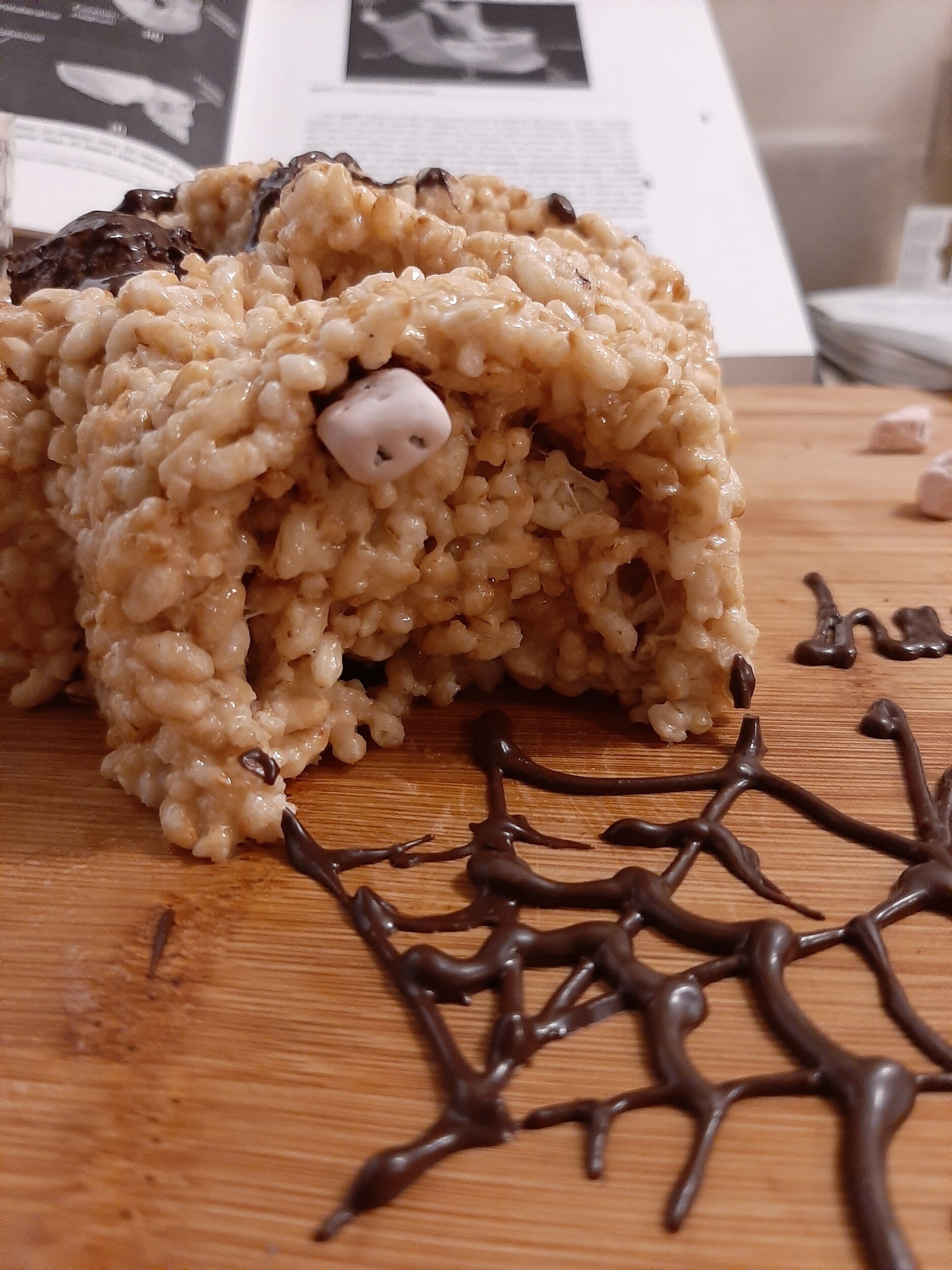 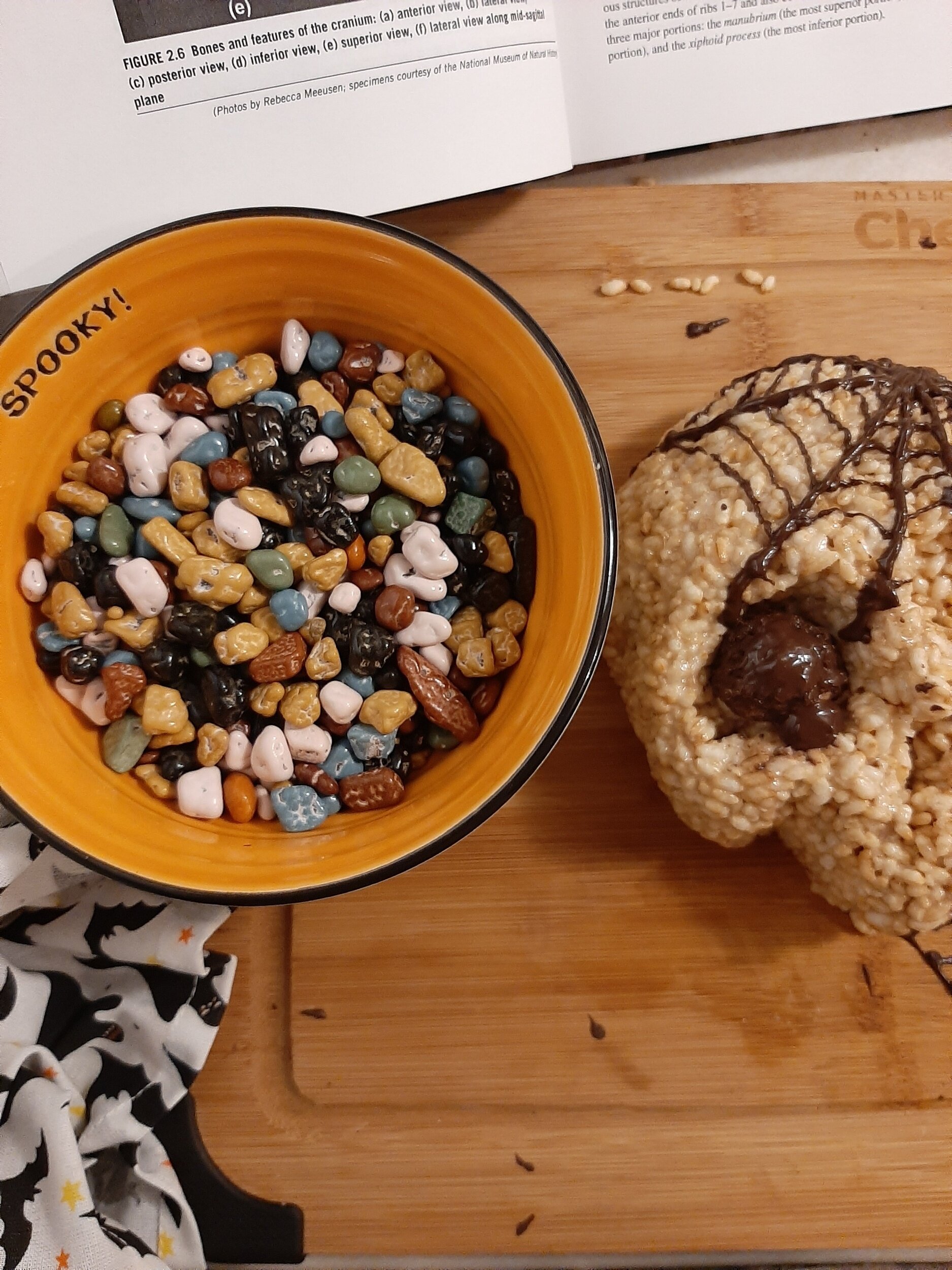 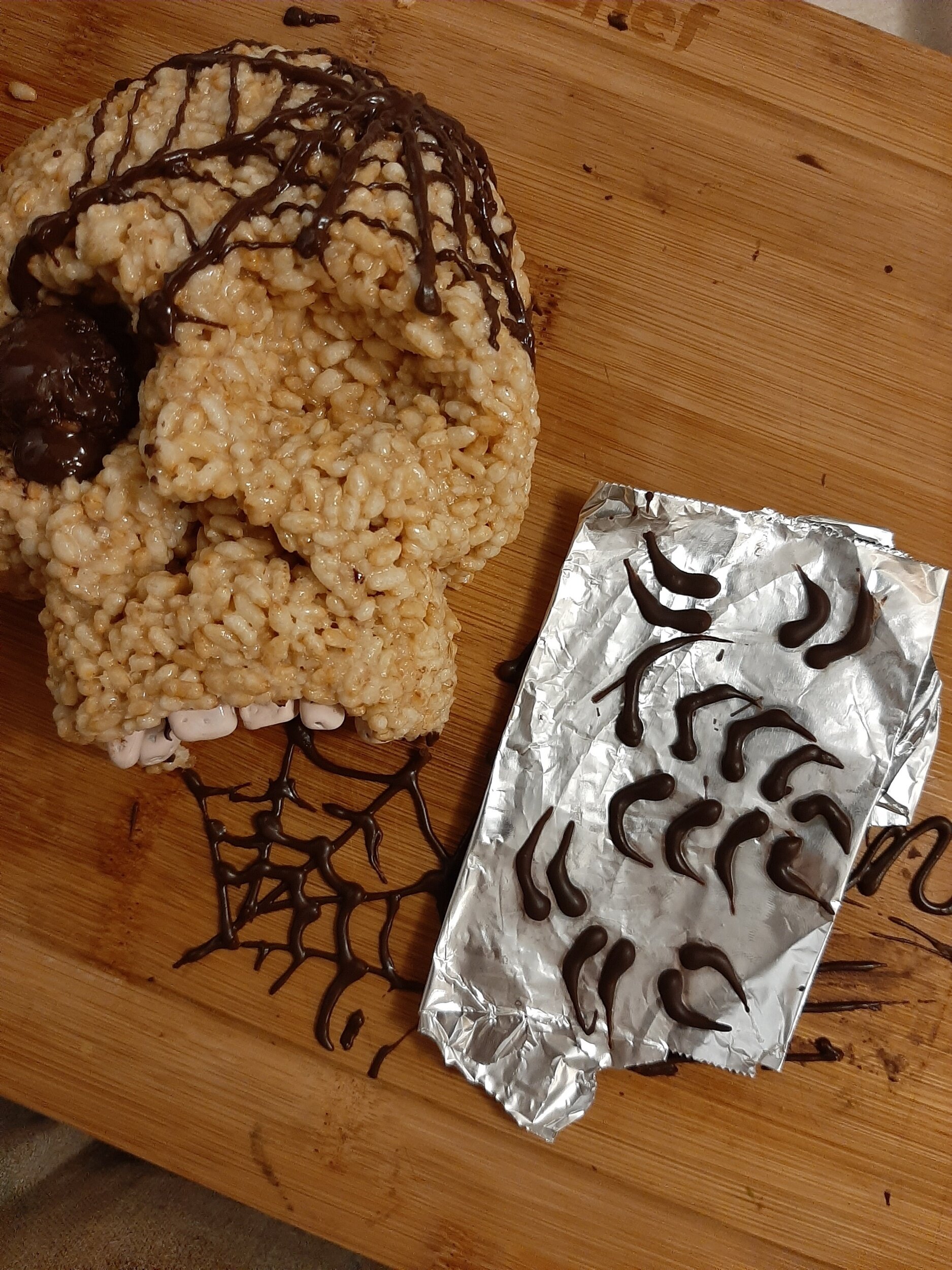 Once the teeth were able to hold themselves up I removed the legs from the freezer. Working quickly with each one making sure not to hold it too long, I attached them to the side of the spiders body with a dab of chocolate.

I piped in the spiders head and it was done. Extra chocolate can be left to solidify and put aside. It can be eaten or you could use it to decorate the serving plate. As you can see I used up most of my chocolate scribbling on the cutting board then proceeded to eat it all as it dried. Yum.