Spring is here! Around here the cherry blossoms are in full bloom the Tulips and Irises are starting to emerge and the humming birds are loudly calling from the tree tops, all sure signs that spring is finally here. One of my favorite early signs of spring is the fresh Stinging Nettle that is ready for harvest.

Stinging nettle grows from early spring to late summer. However, it’s only in early spring that it’s tender enough to be eaten. When the plant is still young, only a foot or so tall you can harvest the first few leaves from the top. They can be added to anything that you might add spinach to. They just need to be washed and blanched or steamed gently first.

Anyone searching the internet for stinging nettle recipes is probably already aware of the benefits of stinging nettle. Not only is it chock full of readily absorbed vitamins but it also helps with inflammation, blood sugar levels, circulation and so much more. Even the sting of the stinging nettle is used topically by some to treat chronic pain.

For our purposes here though it’s a wild growing, abundant and tasty food source.

Where to get Stinging Nettle

I like to cook in season, growing, foraging and shopping at farmer’s markets facilitates this. While I am grateful to have grocery store stocked with whatever foods we want year round, I take great satisfaction in foods that really speak to the seasons. Nettles are one of those truly seasonal foods. They taste like spring, green, fresh, earthy and good for the soul.

How to Blanch Stinging Nettle

When using stinging nettle start by rinsing it in a bowl of warm water for about 10 minutes. This will take away most of the sting. Then, transfer it to a pot of boiling water for 5 minutes. While it’s boiling prepare a bowl of cold water and ice. When the time is up move the nettles into the bowl to quickly bring the temperature down. This will stop it from cooking any further.

I blanch them in the little bunches that I’ve picked them in then remove the stems after they are cooled.

Notes on how to make stinging nettle potato biscuits

This recipe used approximately 1/2 cup of blanched and gently squeezed out nettles. The number is approximate because it can be hard to judge how much you’ll need when it’s fresh. A little bit over or under isn’t a big deal; as long as most of the liquid is being squeezed out it won’t make a huge difference. Dice up the Stinging Nettle in whatever size you like, for the sake of the kids I dice ours up fairly small.

The consistency of the dough should be fairly bread like but a little bit sticky, just enough that it can be gently kneaded without sticking to everything but still a bit tacky to the touch.

It can be split into ball and rolled out for small flat breads. I cut the ball of dough into 1/8th and gently pressed them flatter. I like to bake in cast iron and doing it this way meant I could bake the whole batch in one cast iron pan rather than multiple. Although I think the look of the round ones is cute too.

These are so good fresh, warm with a bit of butter and salt, or even with a soft farmers cheese. They are great with any melted cheese as well. Next we are going to try fresh goat feta once it comes into season. 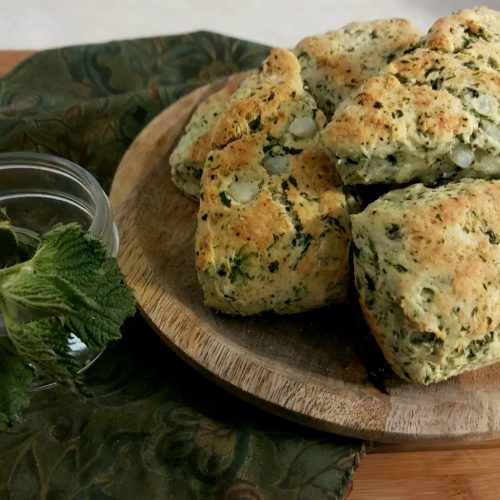