Prune Plum crisp made with fresh Italian prune plums. Fresh fruit of late summer with the warm flavors of fall.

A fruit crisp has been one of my go to desserts since I was a kid. Its super easy to make and fast to put together so even as a kid I could make it myself. I am such a sucker for an apple crisp. I will even order one at a restaurant, despite the ease of making it myself.

This recipe can and has been adopted to any fruit. I am talking about prune plums today but next week it’ll probably be apples or pears, which ever I get my hands on first as the trees around here are all ripening at once.

What is the difference between a crisp, a crumble and a pie?

I’ve always made Crisps but used crisp and crumble interchangeably. They are not the same however, a crisp uses oats and a crumble does not, other then that they are very similar. I am all about the oats though, I’ll even make an individual crisps for myself with double the oat topping.

Now what about a pie, well all three of these use especially the same fruit filling or any fruit filling you’d like. Where they differ is in the base or tapping or both. A pie has a bottom pie crust and sometimes a top crust. Crisps and crumbles only have a topping. You can mix and match to make a crumple pie, crumble on the top pie crust on the bottom, or a fruit bar with a pie crust bottom and crumple or crisp topping. None of this really matters its just about how to name something. There of course more options, like crostatas, tarts, gallates, all of which have the same kind of fruit filling too.

For this recipe there is fruit on the bottom and the topping is primarily made of oats and therefore it is a crisp.

Have you ever eaten a perfectly (or overly) ripe prune plum fresh off the tree? Its like biting into pure sweet nectar magic. Most fruit is picked at least a little early so it can ripen at home a bit and doesn’t just go bad. The farther away your food is coming from the earlier it is being picked. Most fruit continues to ripen after it’s picked but the in many cases it’ll stop getting sweeter once its off the tree. So the longer its left on the tree the sweeter it gets. Obviously unless you have a tree yourself you cant just leave them there until you are ready for them but this is one of those cases where sourcing them locally makes a difference.

Putting together a crumble is fast and easy, the most time consuming part is going to be prepping the fruit. In the case of prune plums you end up cutting a lot of them. Though, they fall away from the pit so easily its hard to be mad about it.

Cut your plums into halves of quarters or smaller. This is entirely based on your preference, I make them on the small side because I am feeding small kids. The fruit base of any crumble, crisp or pie, is always going to be the same key components; fruit, sugar, seasoning, thickening agent and occasionally a squeeze of lemon juice. For this recipe take the plums and toss them with ; 1/4 cup of brown sugar, 1 tsp cinnamon, 1/2 tsp of nutmeg and 2 tbsp. of flour. Set this mixture aside and go to work on your topping.

Putting together a crisp topping is almost as simple as the fruit component. The almost is because to make it get nice and crispy you need to melt the butter. For this particular recipe we are using a pretty standard mixture with the addition of hemp hearts. You can also add any nuts or pumpkin seeds if you’d like. The most important part here is the ratio between dry and wet ingredients. When you are mixing your ingredients together you know you have a good ratio if you squeeze a small amount in your hand and it sticks together but its not wet. Simply add all your dry ingredients into a bowl and pour in your melted butter.

Fill the bottom of your pie plate with your fruit base. Put the crisp topping on top and spread it around a bit. Any points sticking up higher will bake faster so flatten it out at least a little. Place that sucker in the oven and bake until it turns golden brown and fruit juices bubble up the sides. 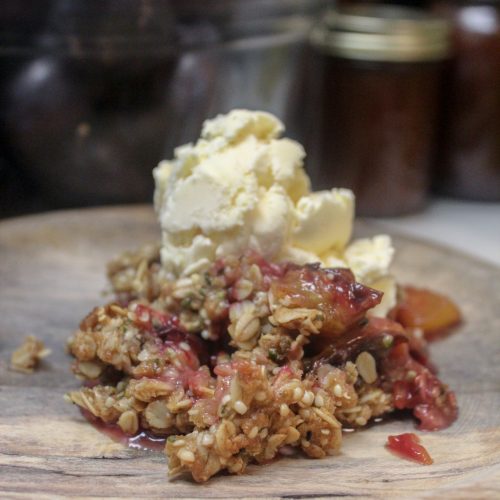