For this project I used a recycled bag, some potato stamps, some spare straw and a little greenery to make a beautifully wrapped gift

My family is by no means a zero waste family, I do however like to get as much as possible out of things before they end up in the garbage. I save all our clean bags, paper and plastic alike, along with most other things that I can find a second use for. It’s a habit that I believe saves us money and space in the garbage (although not in storage).

I can tell you right now that everything under our Christmas tree will not be wrapped this way. A few select things will be but, I have one friend with a birthday in the Yule season who appreciates not only zero or low waste things but also handmade and local things. I was able to fill her gift with beautiful local treasures because our area is ripe with them and I set to work creating the wrapping.

I dug into my cabinet of salvaged grocery bags and pulled out 2 large brown paper bags.

I cut the bottoms off of them and cut all the way up one side so each of them made a nice big sheet.

I decided to lean into the imperfections of the bags and scrunch and crumple them up. Then I ironed the paper, it’s a hardy paper so it had no problem with the direct heat of the iron. The iron flattens the paper but doesn’t remove the wrinkles. 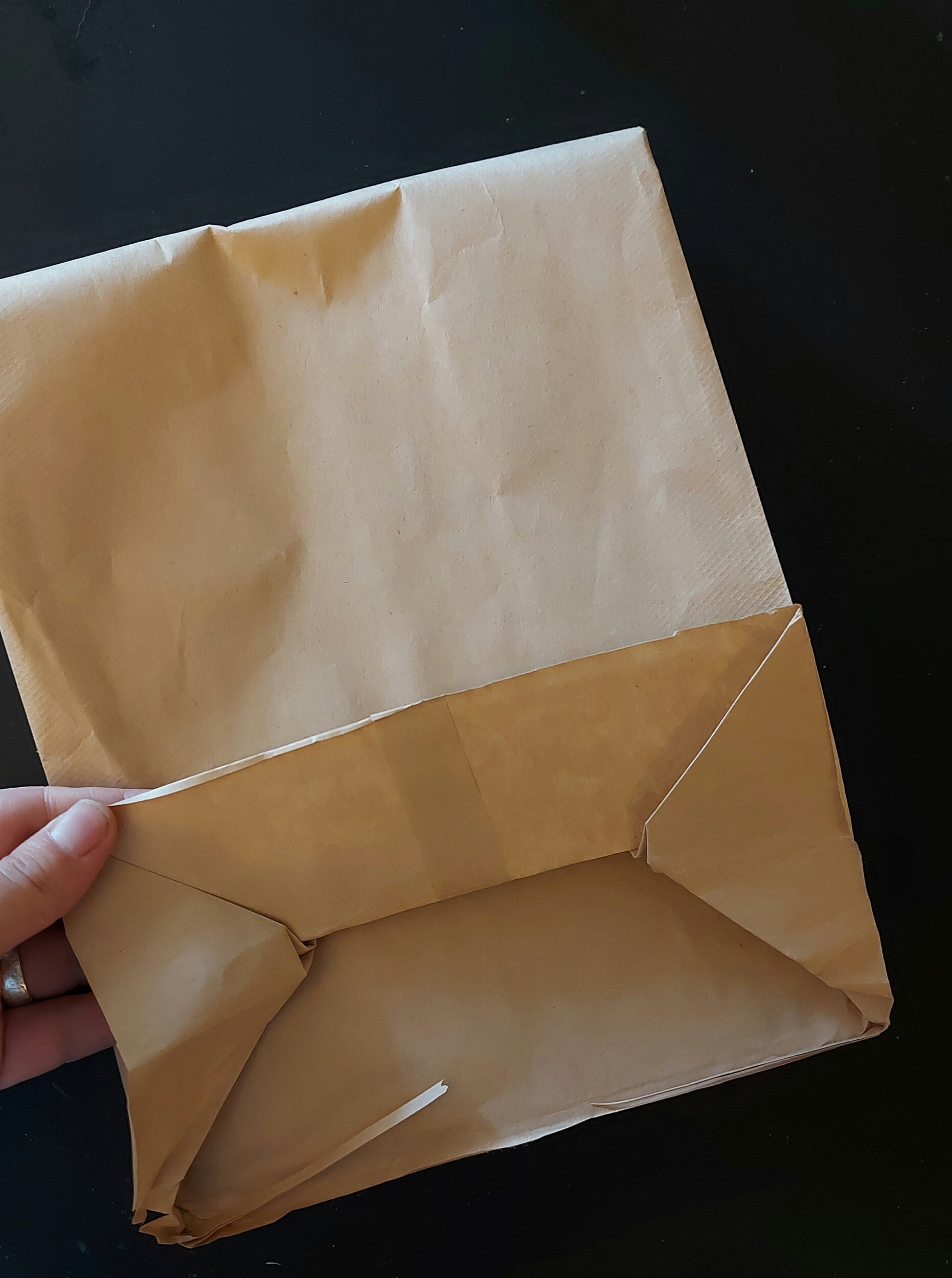 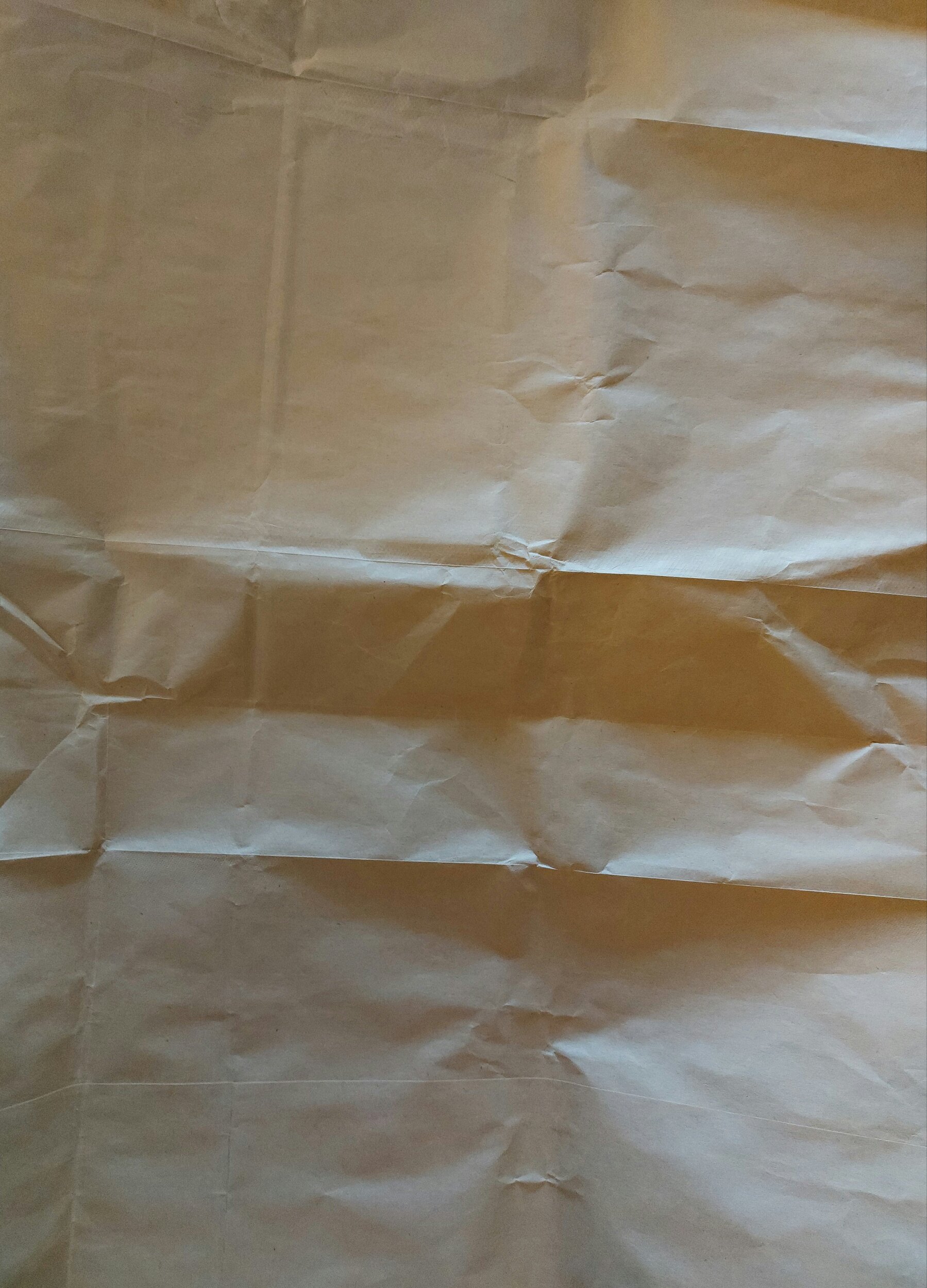 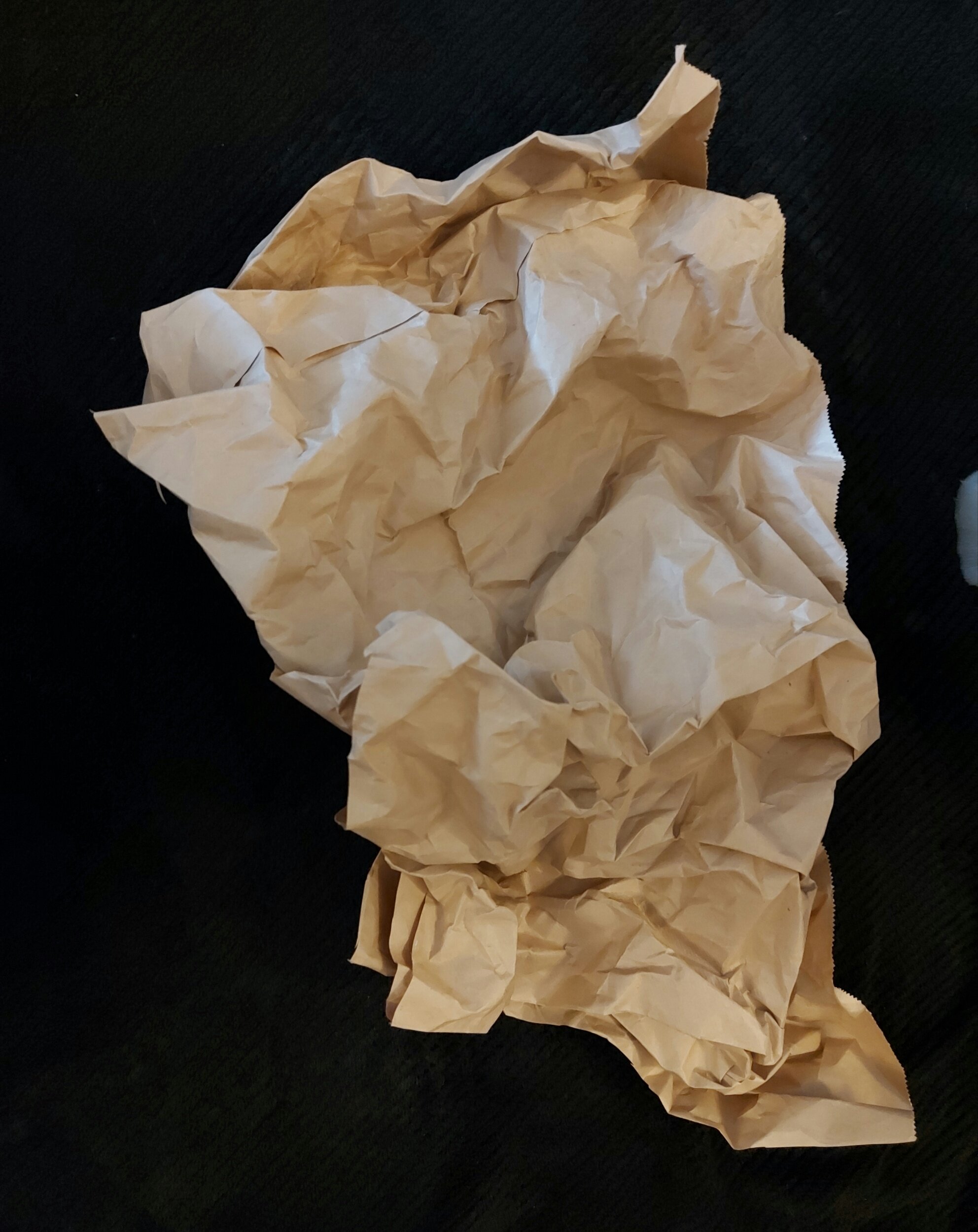 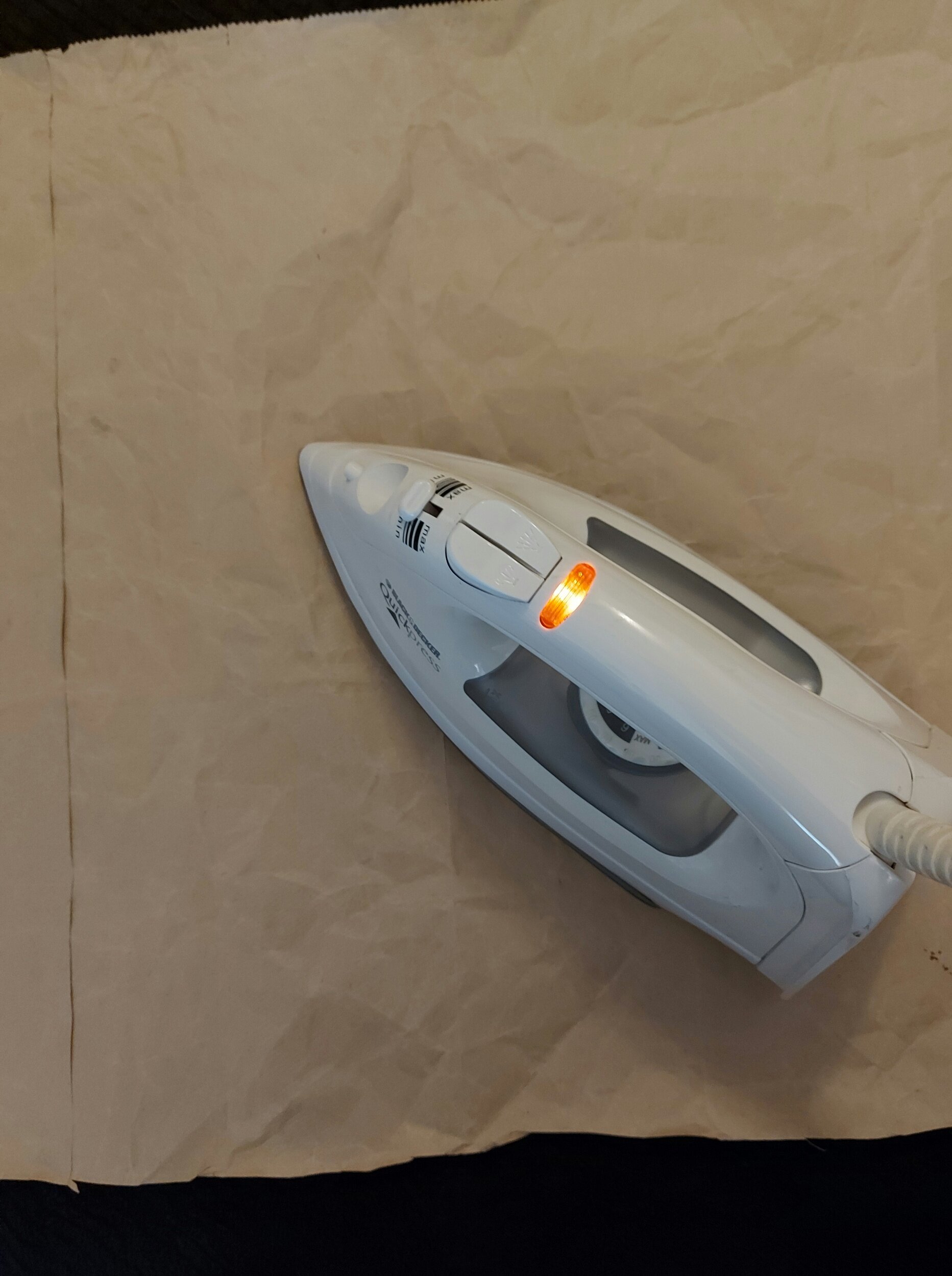 I set my paper aside and grabbed a potato. I used two methods to make my potato stamps.

First I cut one in half, then I pressed a small cookie cutter into it. I used a knife to cut away the potato outside the cookie cutter then pulled it away to leave a perfect star. I carved out the center a bit with a carving tool. 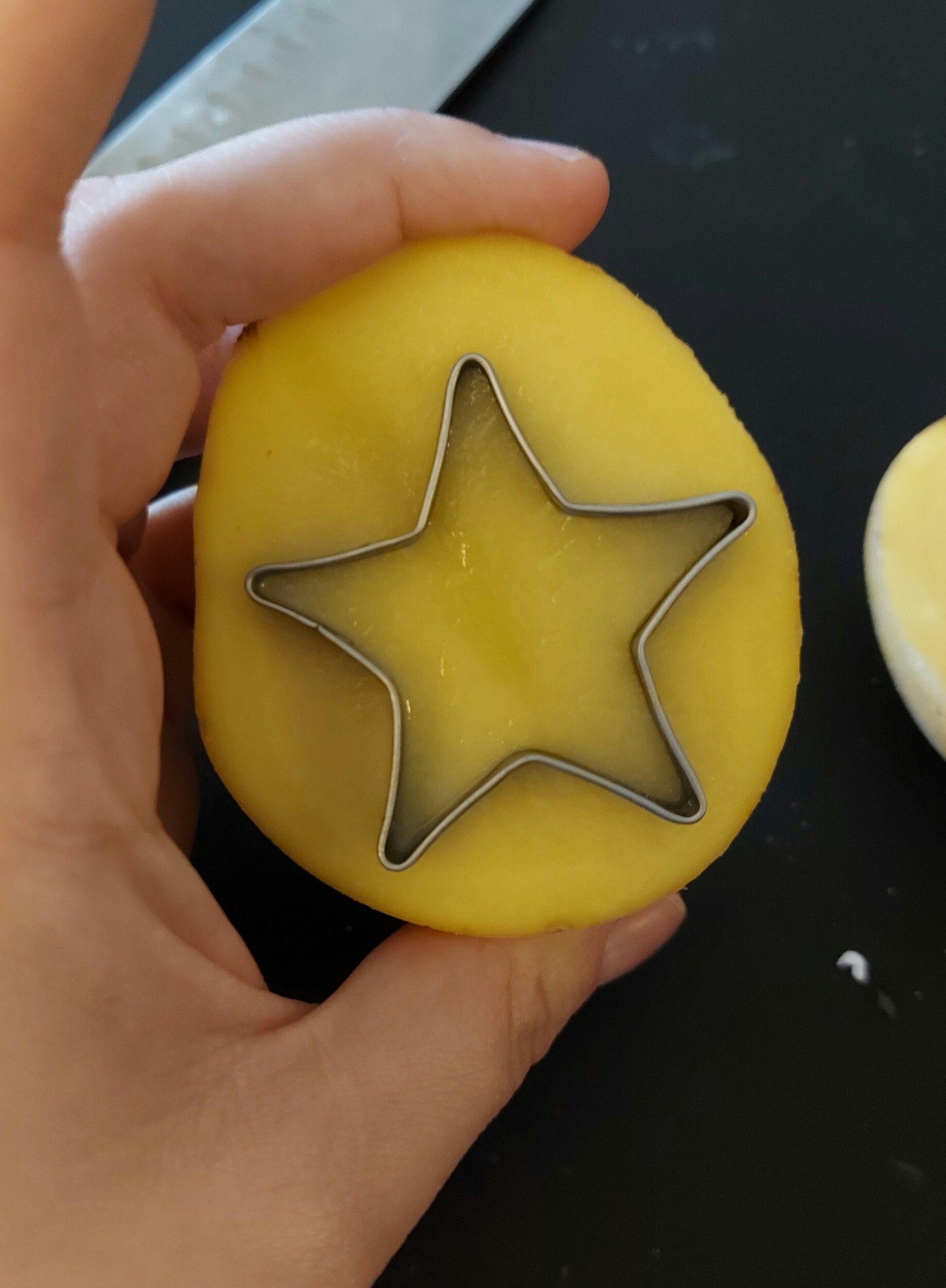 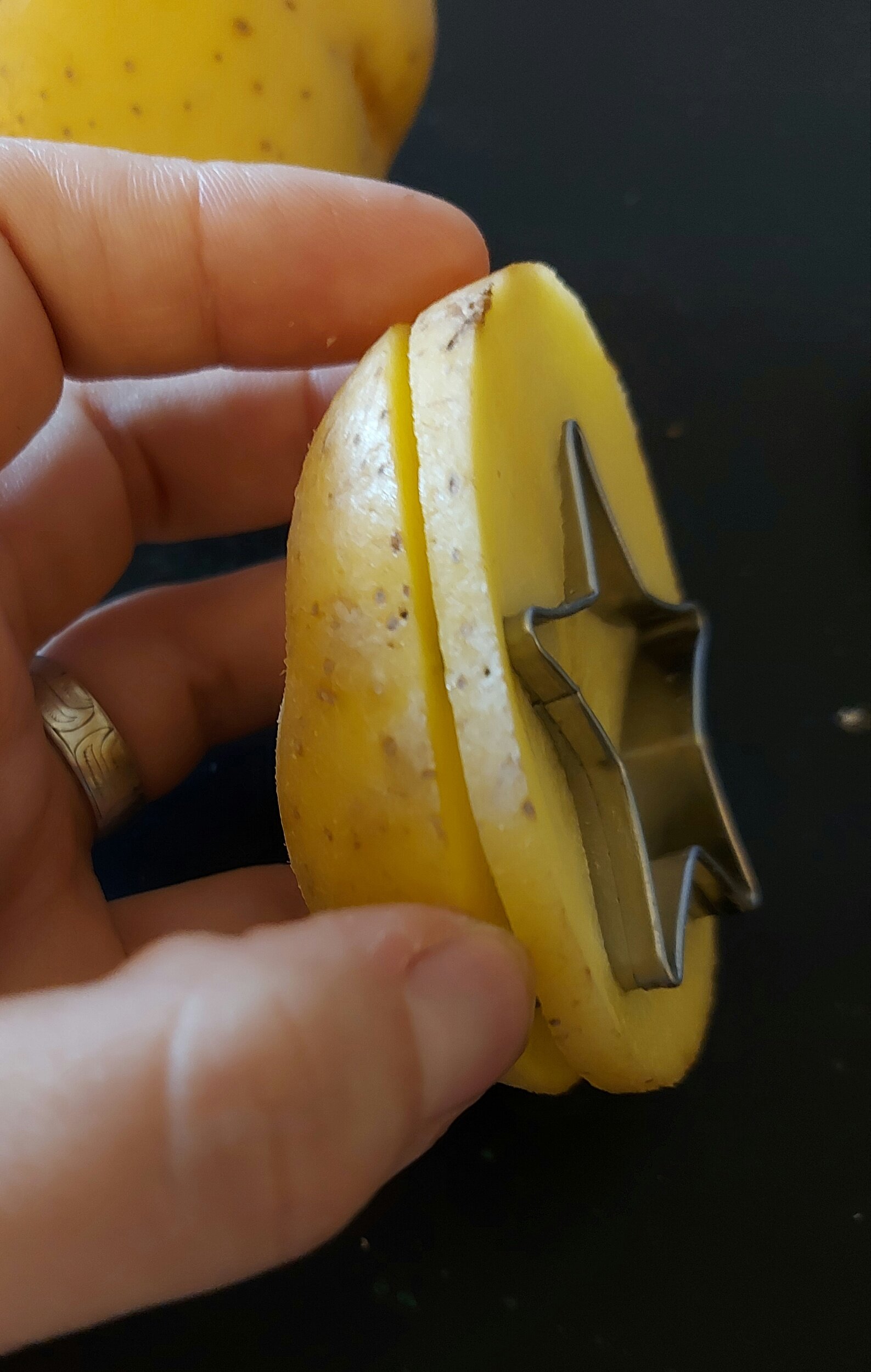 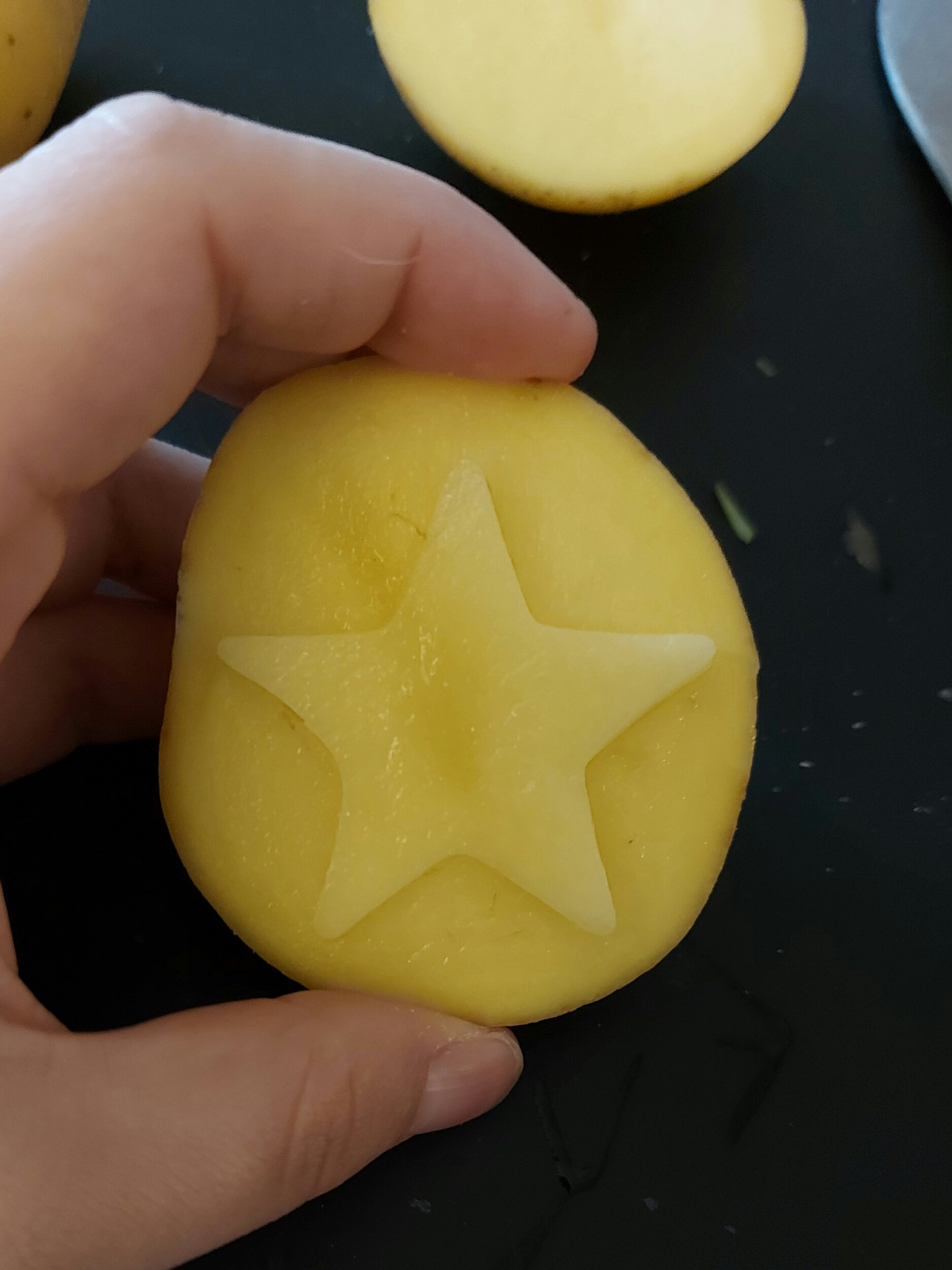 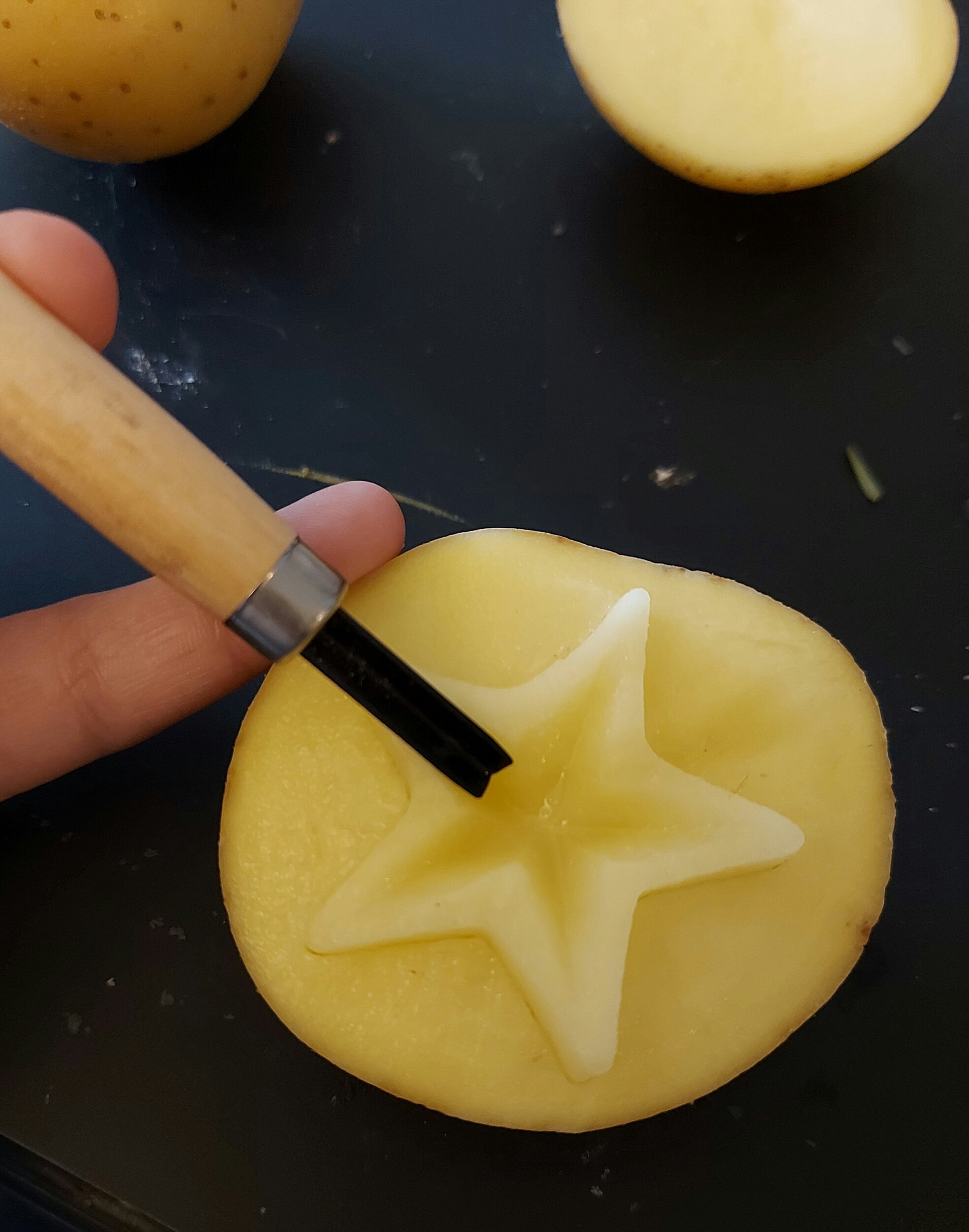 The next one I carved out entirely with a knife. First I dried off my potato then using a sharpie I drew on my simple shape in this case a snowflake. It didn’t work great but it left enough of a mark to follow. Then I carefully, using a sharp knife cut along the lines then removed the unwanted sections. 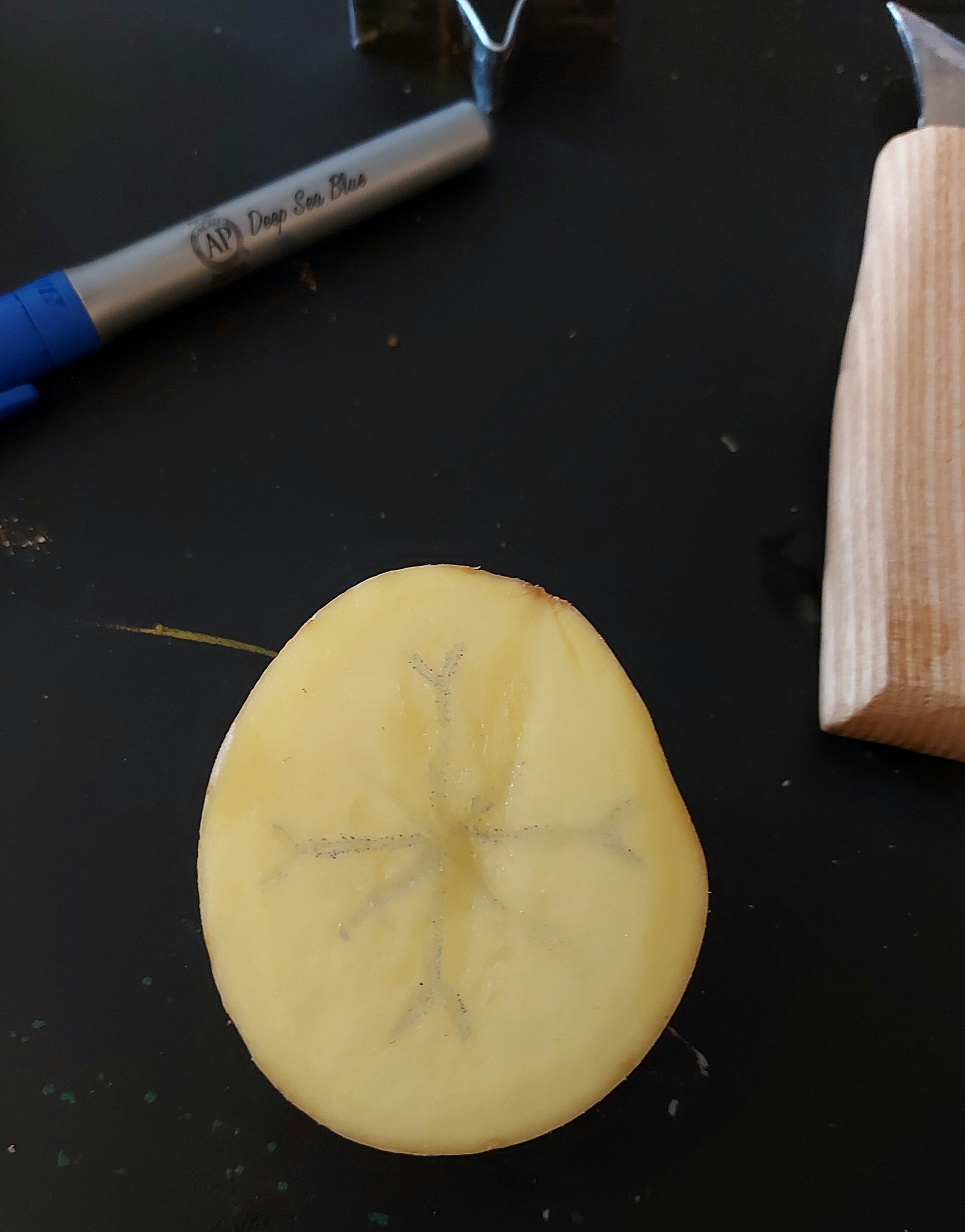 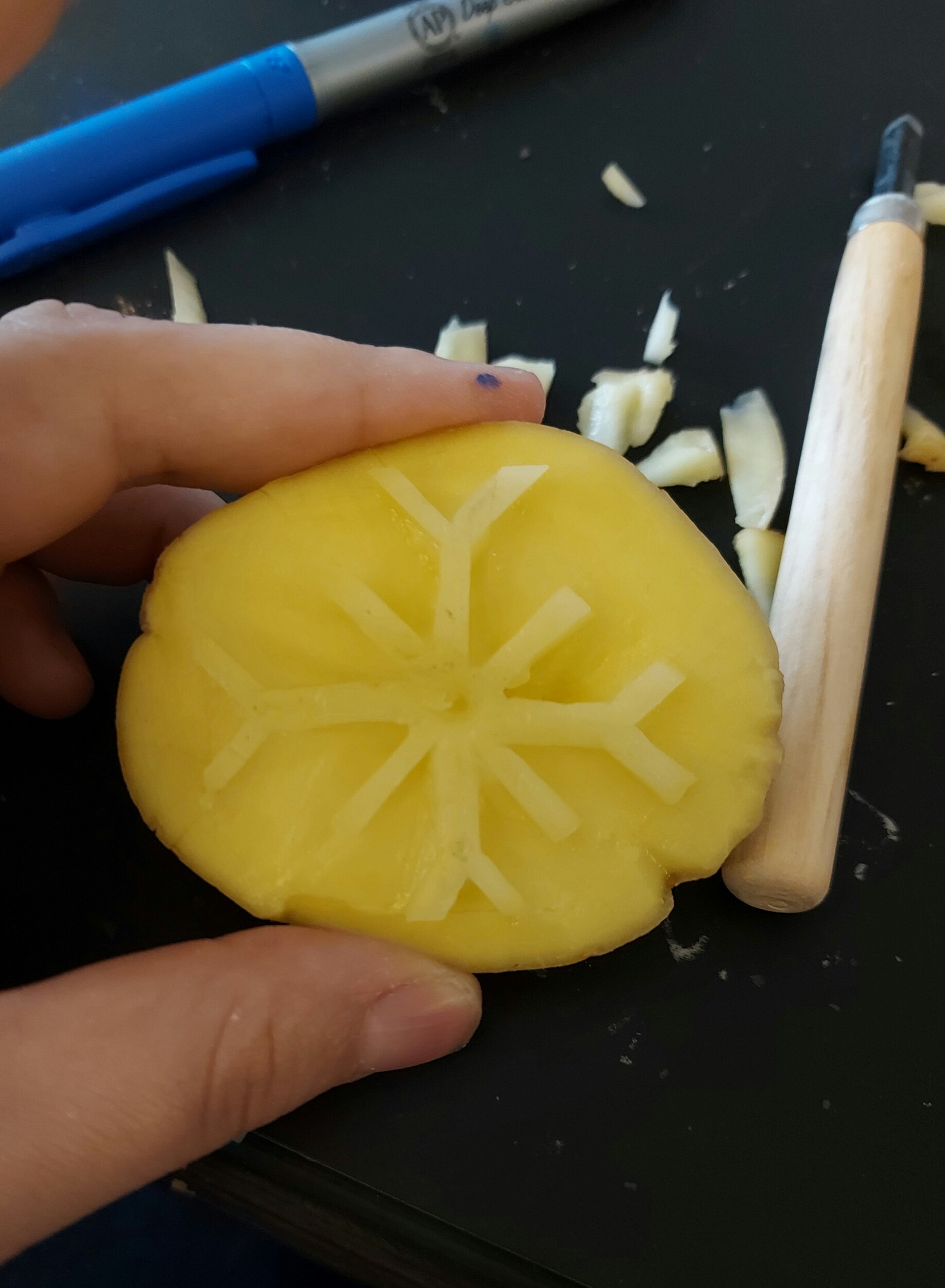 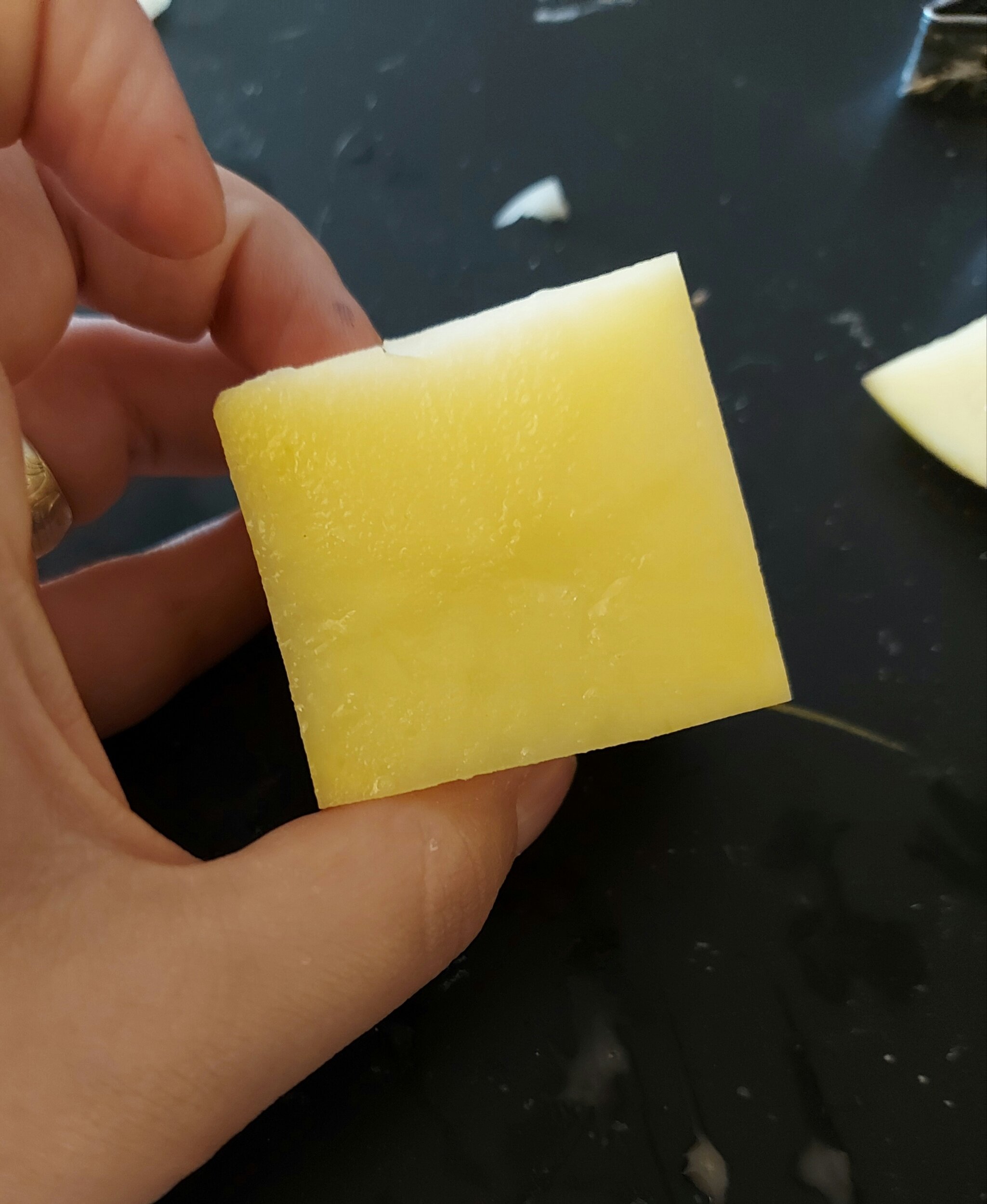 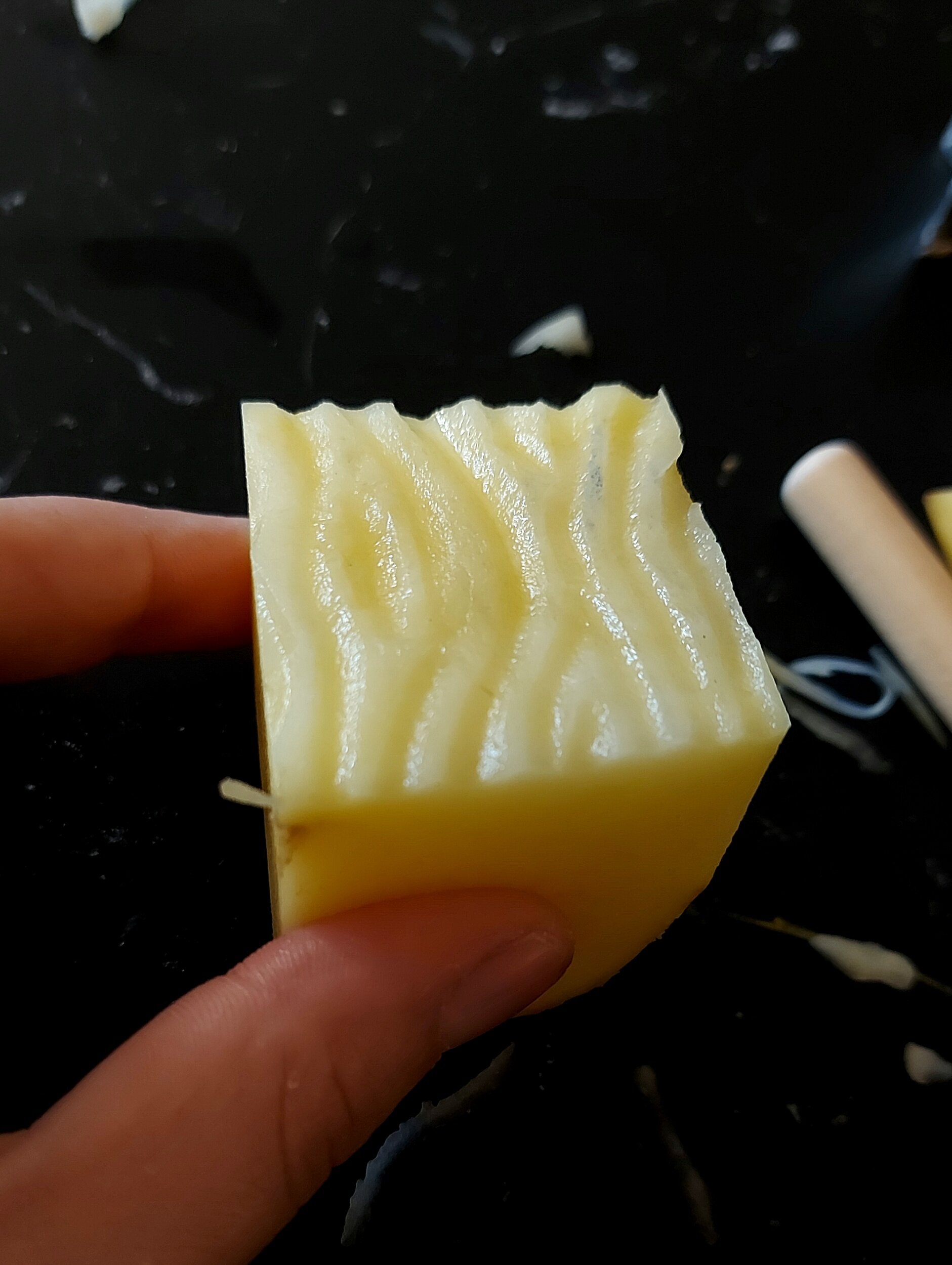 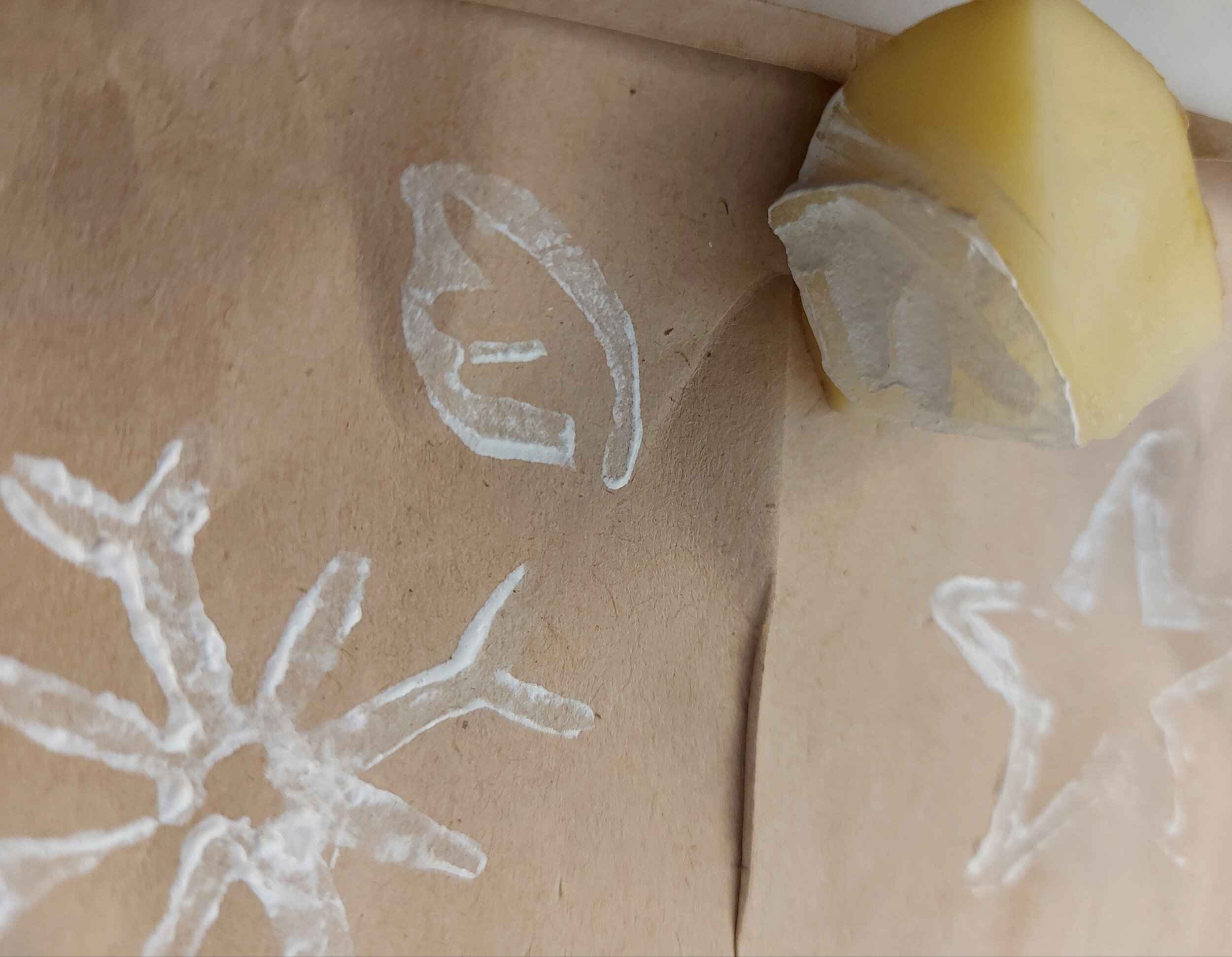 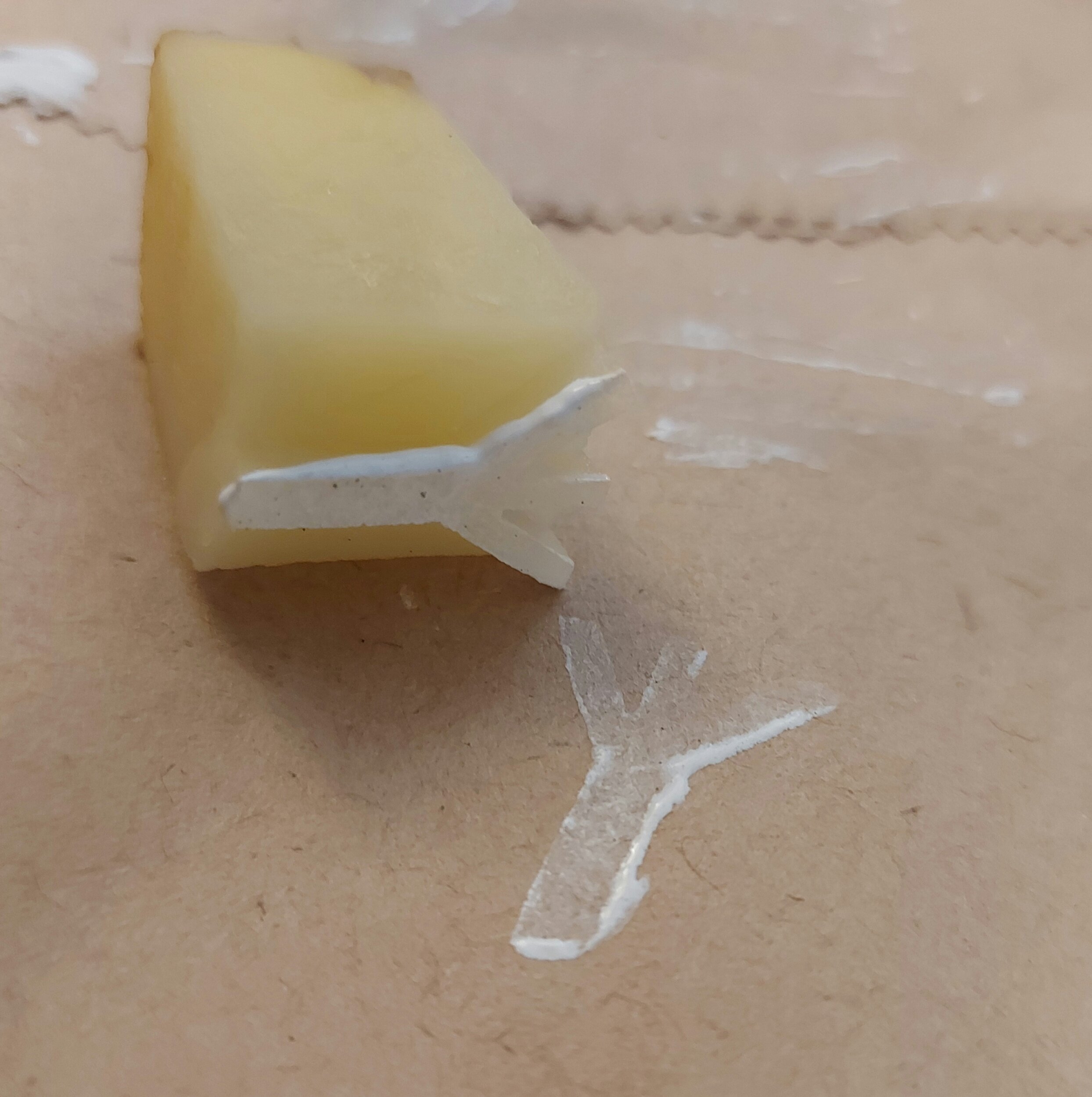 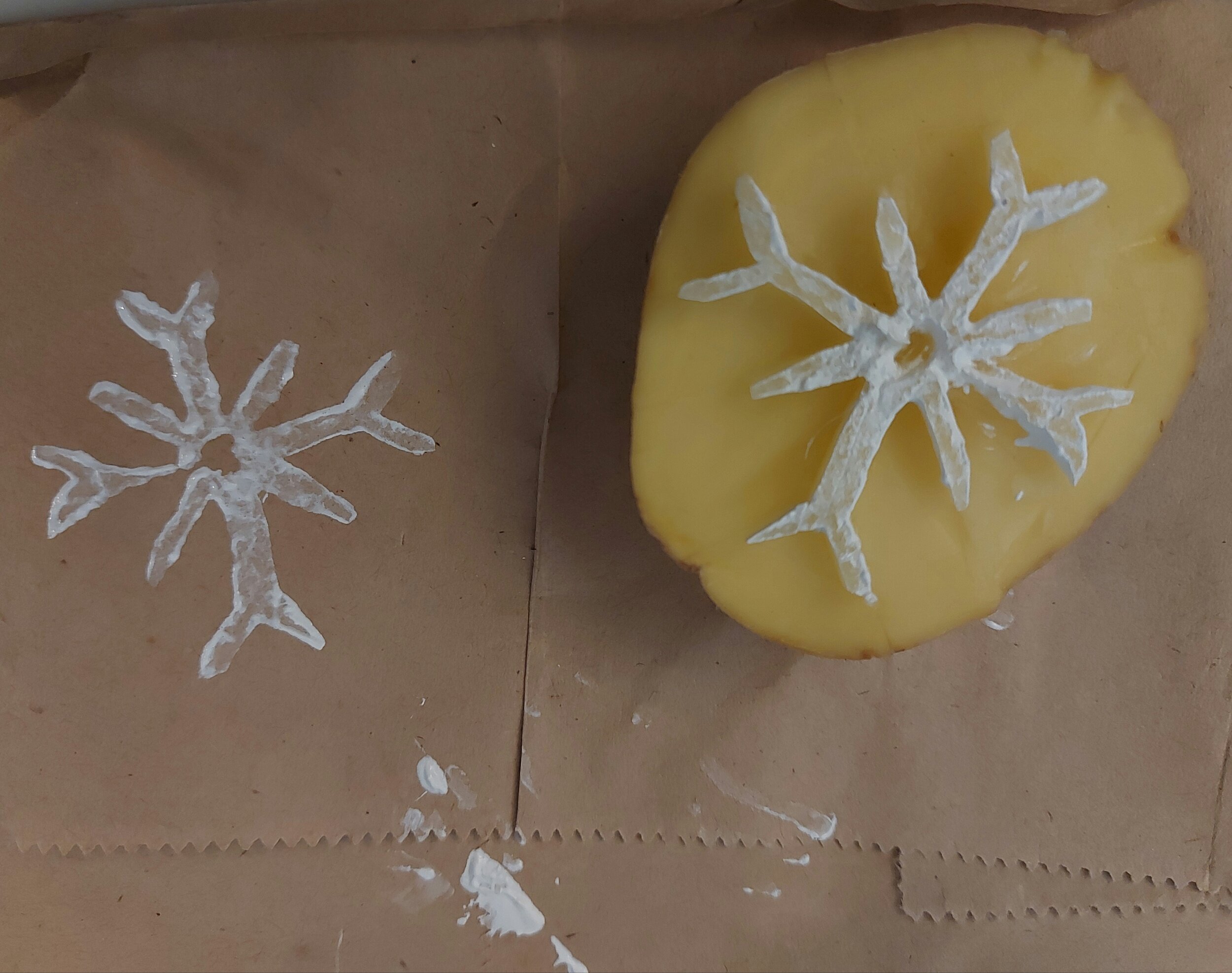 I made another one by carving it out with a small gouge, the same way I removed the center of the star. This one I wanted to be more of a texture rather than an image. I carved it to look like tree bark so I could create more of a scene, although my son thought it looked more like water.

Once all my stamps where done I took out some white paint. I used a paint brush to coat the stamps then with my son’s help we stamped the whole paper. 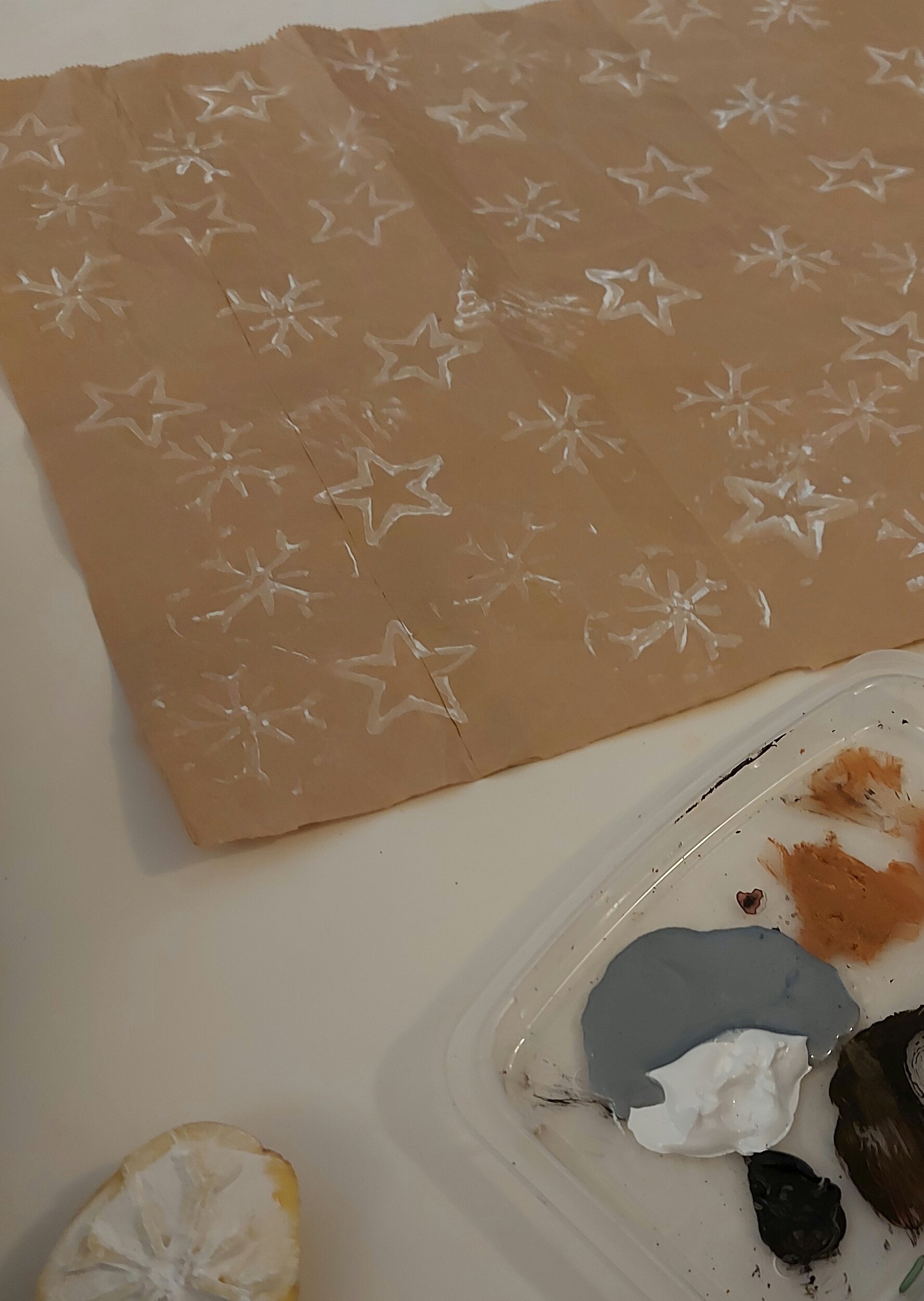 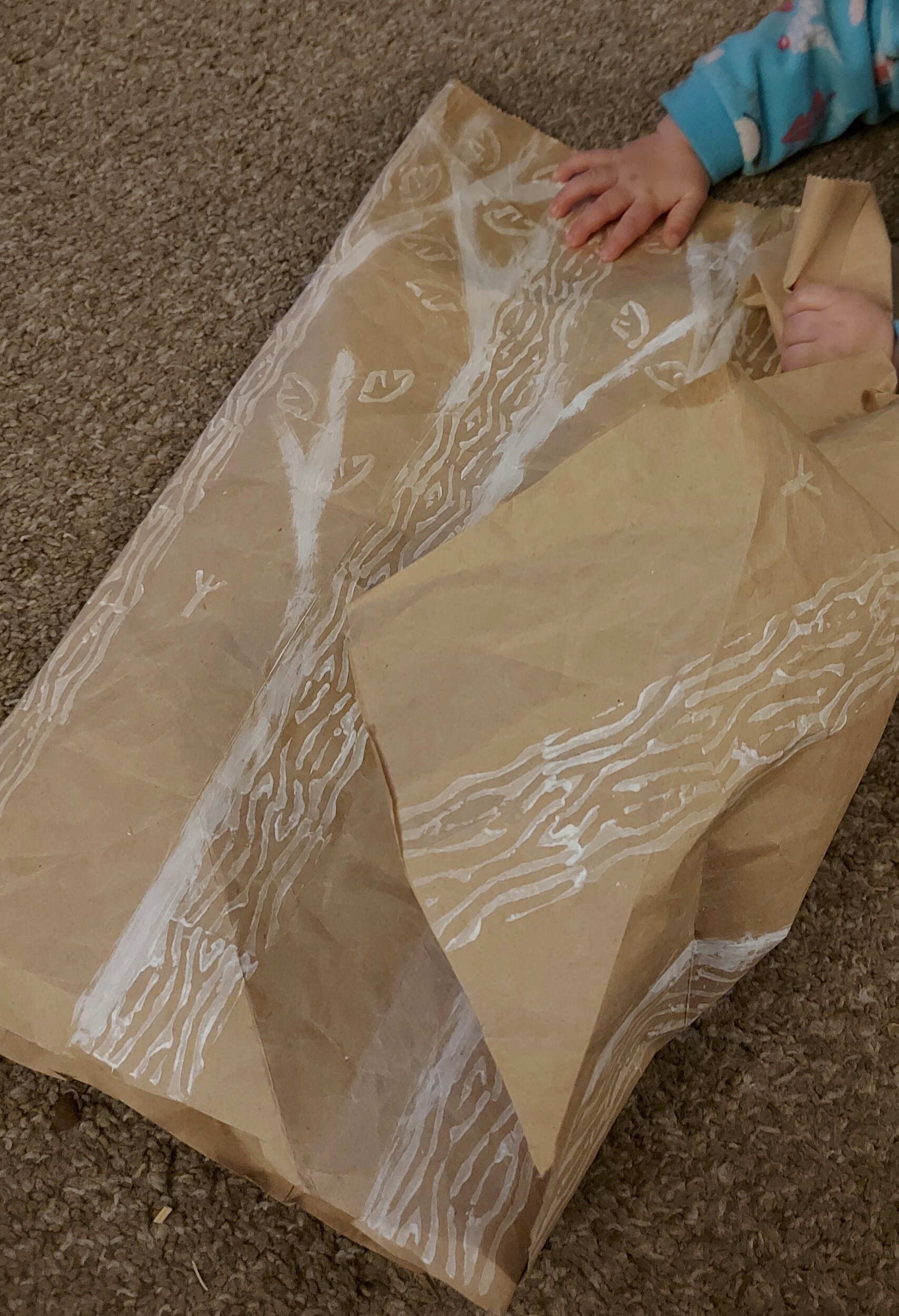 When they were complete and all dried off I wrapped the largest part of the gift. By cutting a square piece of my wrapping paper out and placing it in the middle I folded each corner over in turn over lapping each other until the last piece which I folded and tucked under the rest. This little tuck wasn’t super tight but did eliminate the need for any tape. I used an extra piece of straw from my Yule Goats as a ribbon. I used the tissue paper that the other two gifts already came in when they were bought, (no need to rewrap something) and tucked them into my straw ribbon.

For the final touch I added in some seasonal greenery and a small pinecone. We have been busy making our yule decorations over here so there were lots of holly and evergreen tree bits around the house. That extra little pop of colour goes a long way it’s pretty amazing how far adding a little piece of something organic can bring it all together.

While I don’t think this years tops last years, (last year I baked a basket out of bread for this particular gift, more on that later) I think it turned out beautifully and I still have lots of paper to use for other gifts.