Ok, so here we have another photoshoot for this year. All of the kids shoots have been really different from one another which I love. They all had very different editing requirements meaning I got a lot of practice with different aspects of photo manipulation. So far I have learned a lot and taking fun pictures of the kids is the best way to get practice. All of our photoshoots were fun but the editing of this one was my favorite, I got to get really creative and practice some things I hadn’t before. I am happy this one was the last of the three, I gathered some skills in the first two that made this one more fun and less stressful.

It’s different taking pictures of someone who can take directions, which is a huge benefit of taking pictures of older kids. Although sometimes they can start to get self-conscious, I was worried this would be an issue for us but it wasn’t at all! 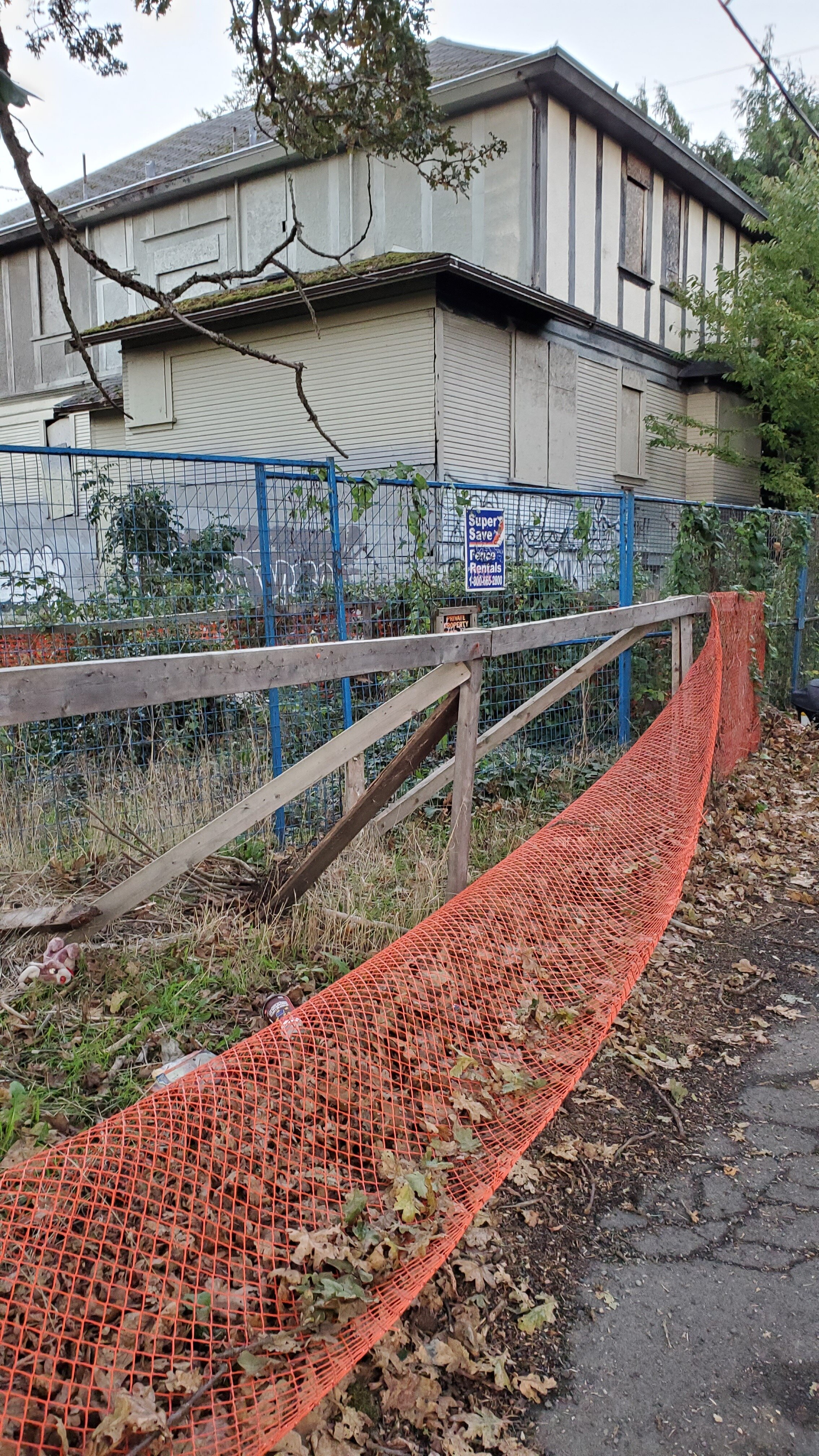 When I was planning this shoot I had a few ideas for locations. My first thought was an alley somewhere in town with some cool graffiti. I had a picture in my head of this fantastic graffiti in another part of town and that’s what I was looking for but I didn’t find anything that was what I had pictured.

The whole time I had a couple people helping me keep an eye out for places I had this lot in my mind as a backup. I remember the one side of the fence being a little shabby and it’s not a super busy street. I also considered a playground, the one by our house is pretty run down and could have worked but I was worried about there being other kids there. In the end we just went with this old house and I am so glad we did. Once we got there walking around it I was surprised with how perfect the spot was. The side of the house I had never seen was better than anything I had imagined.

Doing a photoshoot beside a condemned house, I had to really inspect the area for anything gross or dangerous. I had to move some wood with nails sticking up out of the area but other than that it was good. 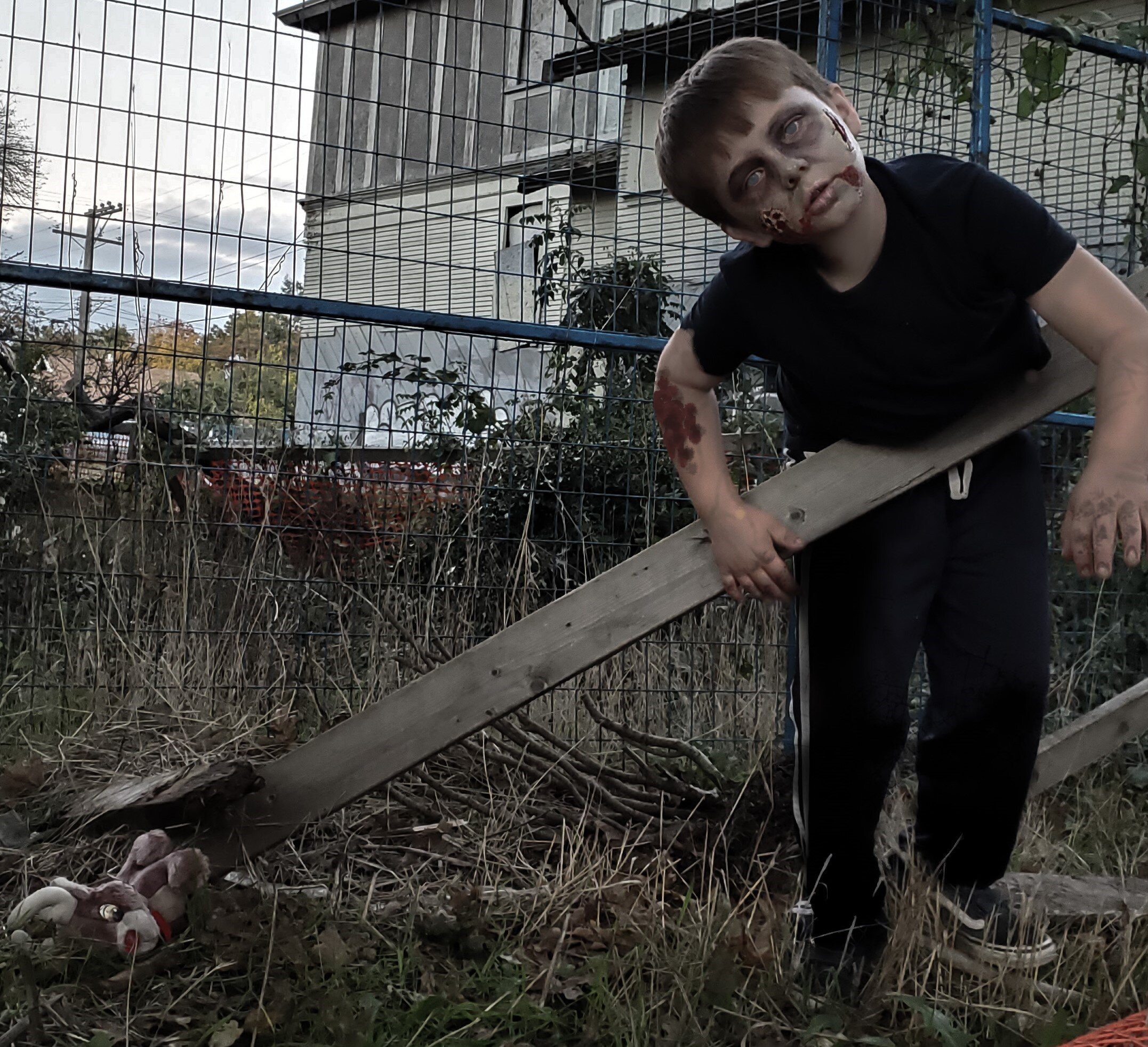 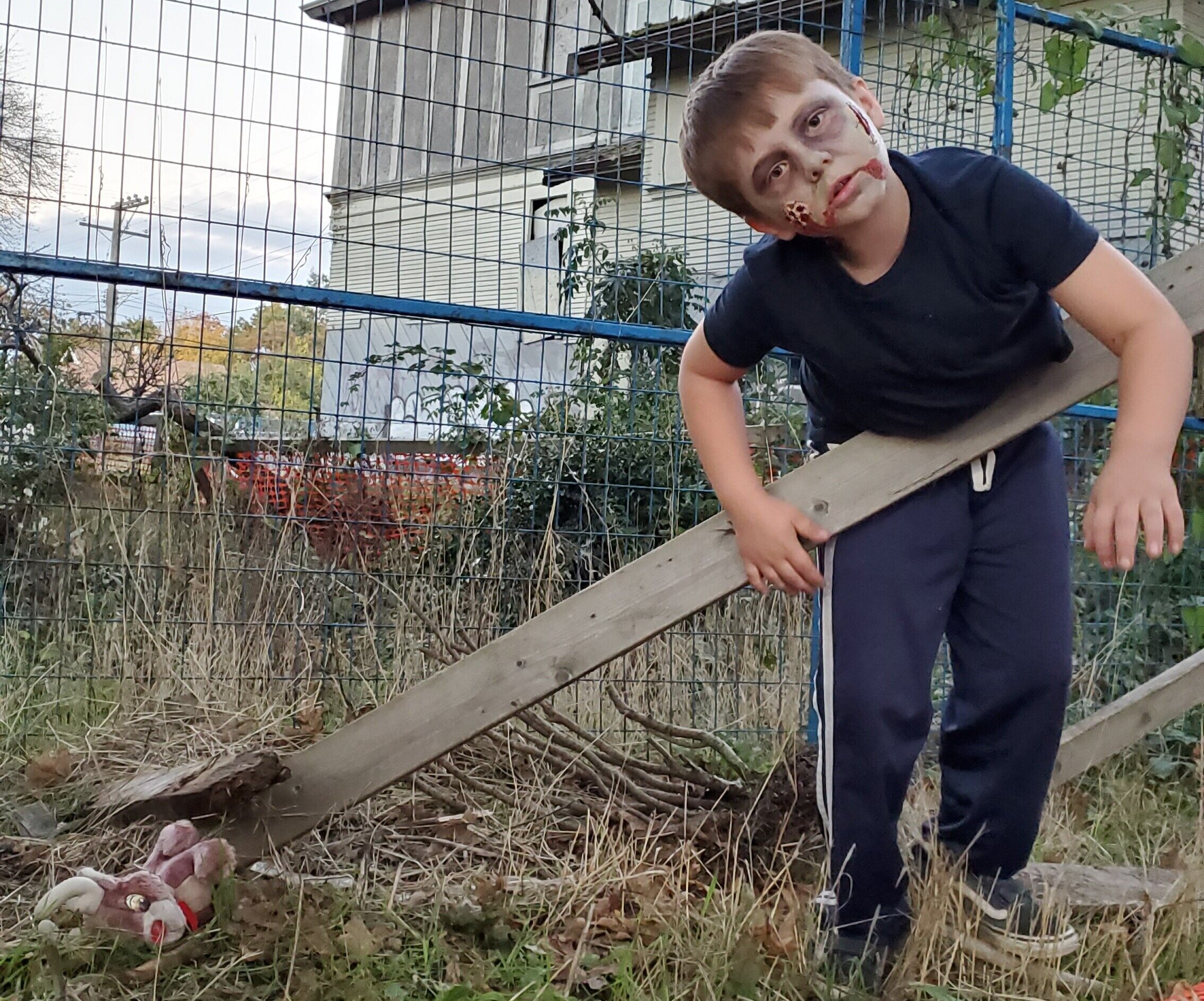 We were lacking in the way of props for this shoot unfortunately. Some torn up clothes would have probably helped or even just some more dirt/mud/extra blood. I had my heart set on some dry ice for awesome fog effects but it didn’t happen. I think it would have really ramped it up but we might not have gotten to this location if the dry ice worked out so maybe it’s ok. I am going to have to come up with another photoshoot we can use dry ice for. 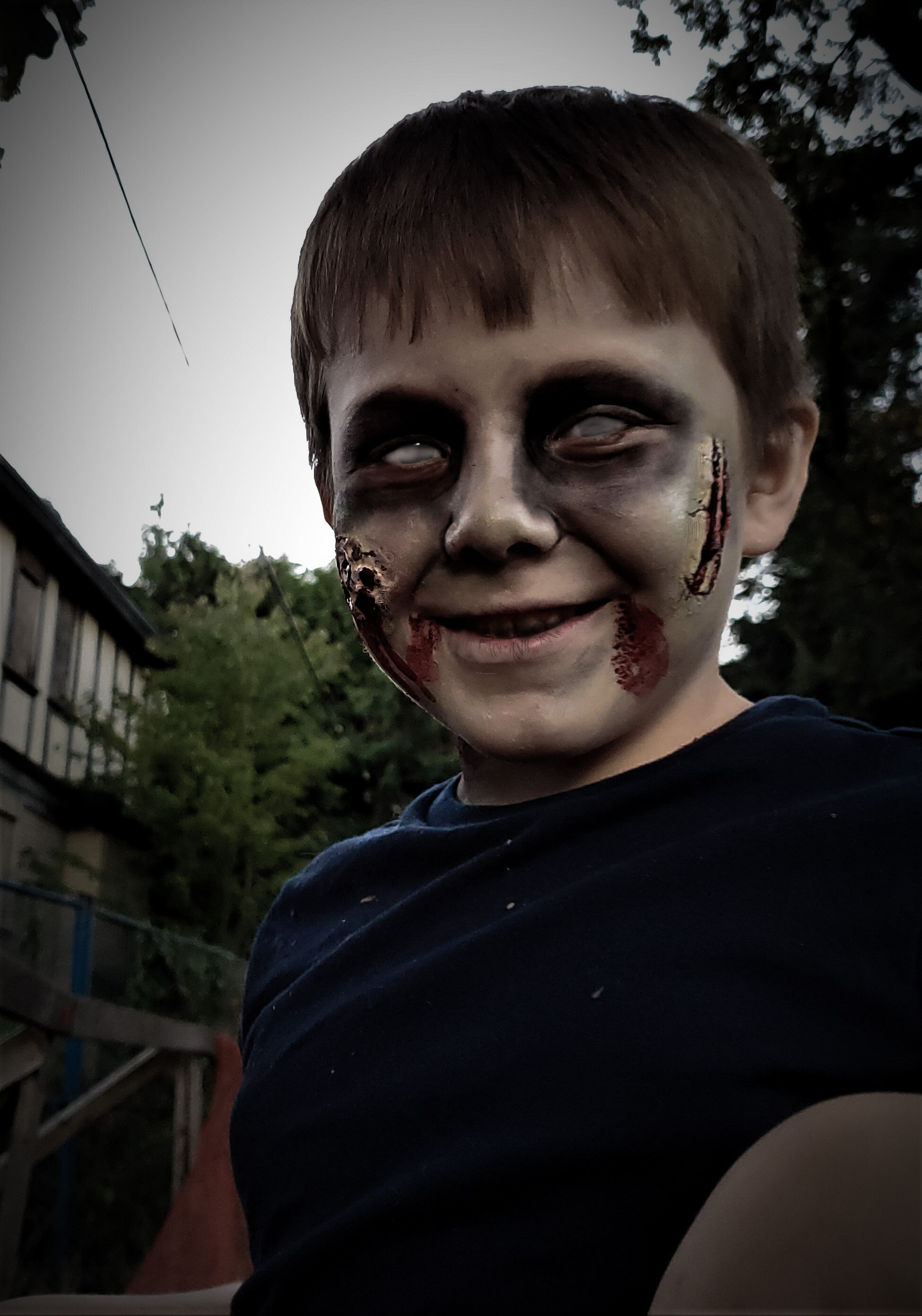 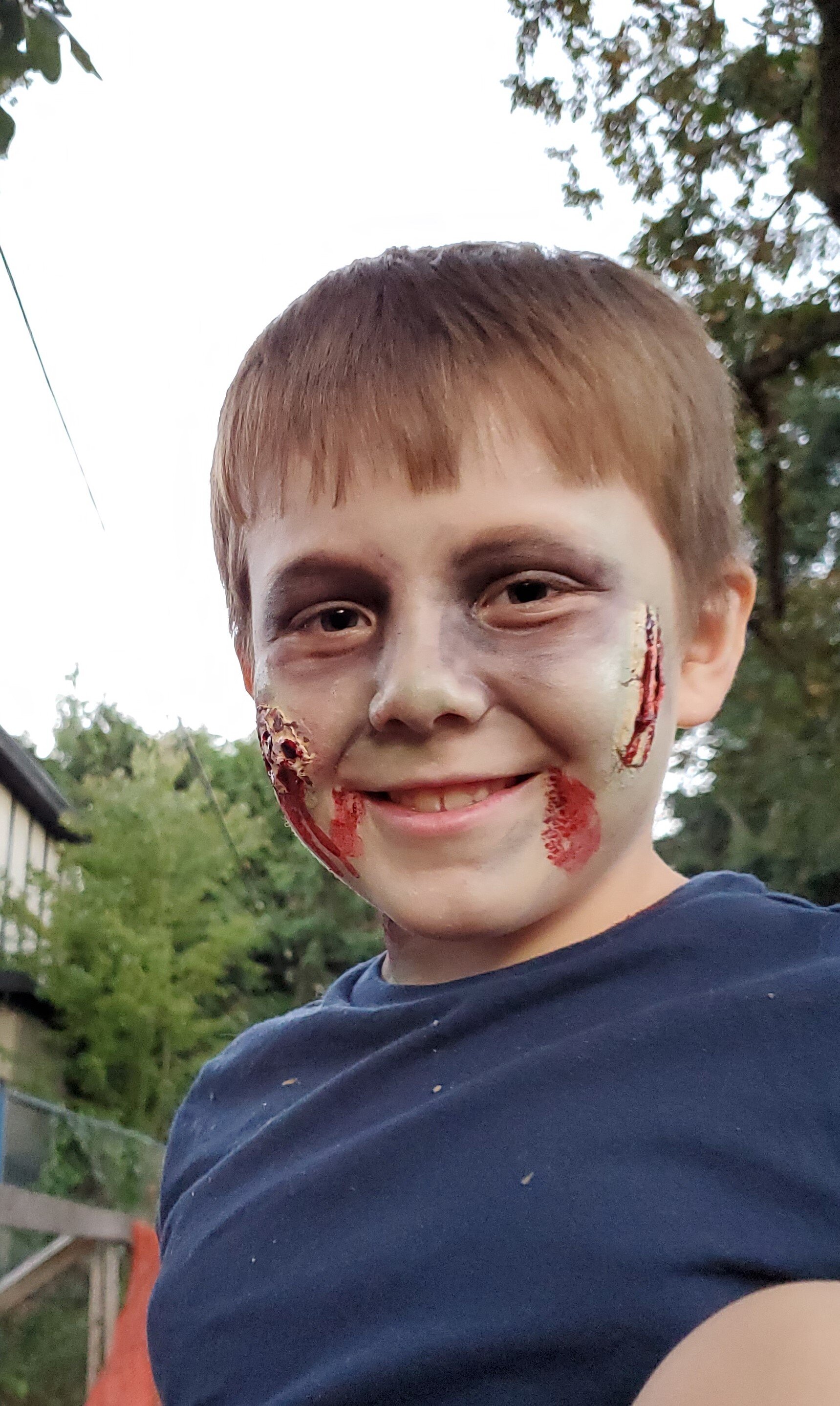 I think the zombie eyes make the whole thing extra creepy and I love it. I edited in lots of dirt and some blood. I found it really hard to make the blood look like anything, some parts look fine with just some red and brown but that drippy or sprayed and dried blood look I just couldn’t figure out.

I really enjoyed the processes of all the photoshoots we did, I am excited to do more. They are such good practice for photography and editing and they are too much fun. What better way to practice and develop new skills then taking cute pictures of your kids.